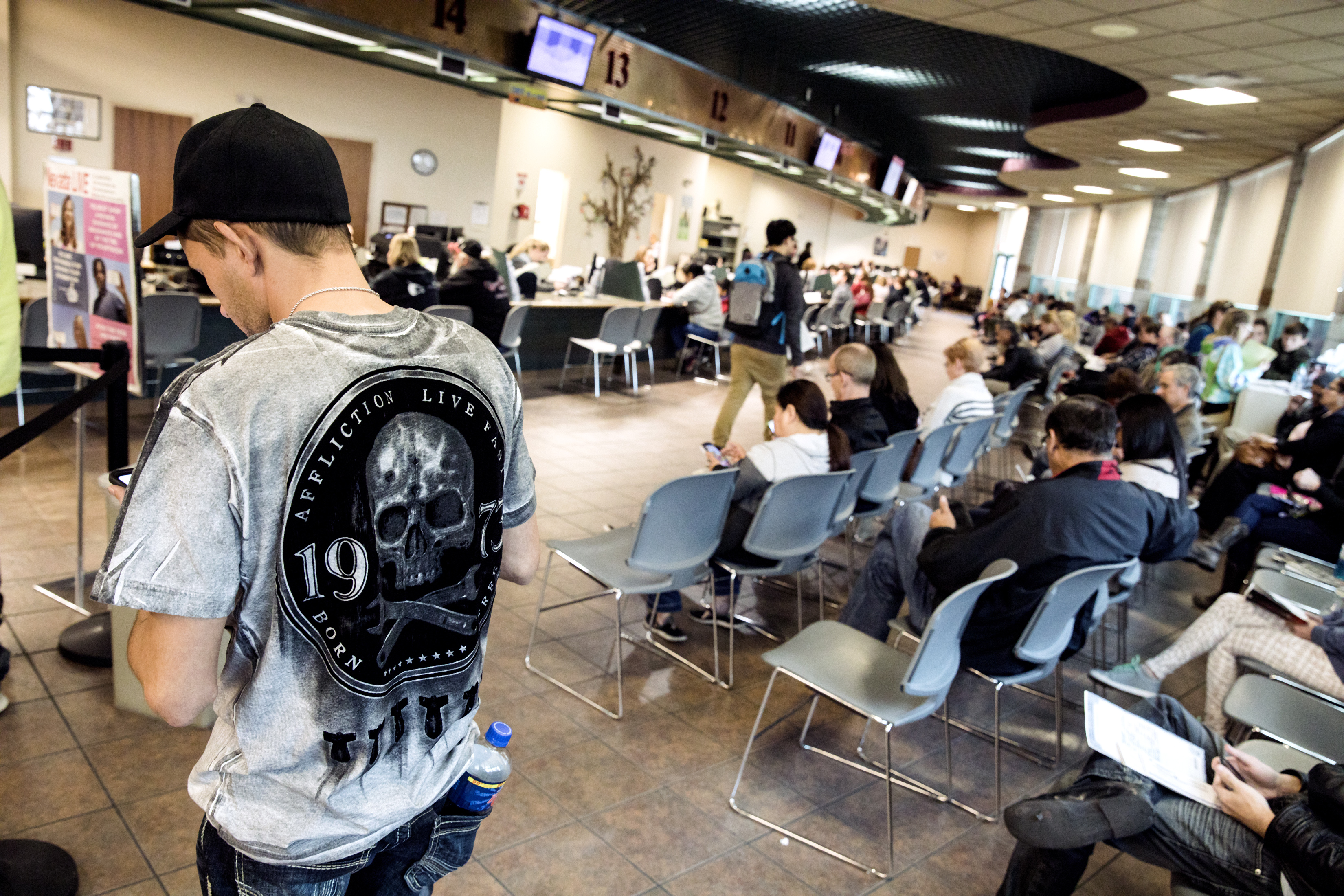 Lawmakers on Thursday approved the DMV’s plan to pay back millions of collected $1 fees that were declared unconstitutional by the Nevada Supreme Court earlier this year.

Members of the Interim Finance Committee unanimously approved the transfer of $6 million in technology fee payments into a refund budget account to begin the process of issuing refunds to Nevadans who paid those fees between July 1, 2020 and Aug. 31, 2021. The refund plan, however, still requires a final stamp of approval from the District Court in Carson City.

The refunds are required under a Nevada Supreme Court decision from May, which found that an extension of the technology fee passed by the Legislature in 2019 was approved without the two-thirds majority support necessary for any tax bill. The extension was passed on a party-line vote with all Republican lawmakers opposed.

During the meeting, Assemblywoman Robin Titus (R-Wellington) raised logistical concerns about the refund plan. Under the plan, an individual wishing to receive a refund must go to a DMV office in person, where the DMV will verify the number of past transactions for which the individual paid the technology fee before issuing a cash refund.

“Everybody who feels that they have a refund coming and are interested in collecting that refund has to go in person to the DMV office for that, which is already overcrowded? There's no online application process?” Titus asked.

A previous version of the plan was rejected by members of the committee in August for not having approval of Senate Republicans who had challenged the initial tax extension. That plan — which would have allowed customers to receive their refunds electronically — was one of five considered “not viable” by the DMV in a memo to the District Court. Other proposed plans, including mailing checks to everyone owed a refund and giving everyone $1 off a future transaction, were also rejected because of high costs or the time needed to implement them.

The approved plan also includes a provision to pay refunds owed to almost 68,000 businesses through checks with interest added, rather than with cash. The checks are set to be issued by Wells Fargo beginning in mid-December.

“This is a long saga,” Committee Chair Sen. Chris Brooks (D-Las Vegas) said. “I think moving forward with this plan as modified — that really addresses a lot of concerns that our committee had.”

In addition to the technology fee refund plan, members of the Interim Finance Committee authorized during their Thursday meeting a slew of big-money appropriations, including hundreds of millions in federal COVID-19 relief dollars for K-12 schools, $10 million to support broadband improvements for tribes in Nevada and more than a million dollars to help develop a public health insurance option authorized during the past legislative session.

Members of the committee also approved a group of appropriations requested by the Department of Education that will send millions of American Rescue Plan (ARP) dollars to local school districts and statewide programs aimed at helping K-12 schools.

Following the approval of the federal legislation in March, Nevada received more than $600 million in Elementary and Secondary School Emergency Relief (ESSER) funds, making up two-thirds of the federal funds to be distributed to local school districts.

During Thursday’s meeting, lawmakers approved the allocation of the final third of ARP ESSER funds, $322 million, to local school districts. The funds are set to be used to address learning loss and close achievement gaps in K-12 schools across the state exacerbated by the COVID-19 pandemic.

That funding will be boosted by $200 million from the state’s $2.7 billion in ARP general aid, which lawmakers allocated to the Department of Education through AB495 during the legislative session.

As school districts prepare to spend those massive sums of money, Superintendent of Public Instruction Jhone Ebert said the state education department plans to develop a dashboard for tracking the programs funded by ARP dollars.

“All of these work programs have a dashboard, so that you and the public can see every single project that school districts are requesting and are funding,” Ebert told the committee. “We want to be held accountable for these dollars. We want everyone to be able to see what is transparent.”

During the meeting, lawmakers approved an allocation of $885,000 to fund a contract to help develop the accountability dashboards.

Lawmakers homed in on the Department of Education’s staff recruitment and retention efforts in particular.

Assemblywoman Brittney Miller (D-Las Vegas) said student teachers were having trouble accessing stipends made available through the ARP funds. Ebert, however, said she had not heard from any higher education institutions about those issues. (The department’s plan for spending ARP funds includes $20.7 million to fund stipends for student teachers.)

“This is brand new. We expect the program to last two years. If people have not heard we will double down on the amplification of getting the information out,” Ebert said.

She visited one elementary school where the principal posted photos of all the school’s teachers in the hallways. However, the school had no Black male teachers, so the principal asked a janitor “to put a suit on and take a picture, so his Black male students could see someone that looked like them,” Monroe-Moreno said.

Ebert said she expects students of color in the Nevada System of Higher Education to help “grow the pipeline” of teachers of color.

Several members of the public called into the meeting to raise concerns about the department’s plans for teacher recruitment and retention. Brian Rippet, president of the Nevada State Education Association, said those funds should be used to address low pay and overcrowded classrooms, rather than professional development.

“Do you really believe that it is a skills deficit or a lack of enough to do [that is] prompting educators to leave the profession?” Rippet said.

The department’s listed plans for recruitment and retention include more than $9 million for various teacher support and skills development programs.

Members of the committee also approved a transfer of $10 million to the state’s Office of Science, Innovation and Technology (OSIT) to support broadband improvements for tribal organizations.

The state received the funds through a settlement related to the merger of mobile communications companies T-Mobile and Sprint in 2019. Under the settlement, T-Mobile agreed to make three charitable payments of $10 million to the state to support workforce development, expansion of small businesses owned by minorities and women and “broadband improvements made for the benefit of Nevada's Native American Tribes.”

Brian Mitchell, director of OSIT, told the committee he expects the funds to work in tandem with other federal grant funds from the National Telecommunications and Information Administration that 15 of Nevada’s 27 tribes applied for. Mitchell said OSIT will develop plans to spend the settlement funds on three main categories: residential and community connectivity (which may include infrastructure projects and assisting low-income tribal members afford monthly broadband service), connectivity for community institutions (such as schools and libraries) and expanding telemedicine.

“Given that many tribal lands are far away from large medical facilities, we feel like telemedicine would be a great opportunity to increase overall health,” Mitchell said.

But Mitchell noted that responses about the federal grant funds may not come until late November or early December, and said OSIT will need to reach out to the 12 tribes that did not apply for the grant funding throughout the spring, meaning OSIT may not have set plans for spending the settlement funds until summer.

He also said the program’s success would be judged by a number of factors, including how broadband speeds are improved after spending the funds, the number of buildings connected to fiber infrastructure and how many tribal members report having internet connection.

During the meeting, lawmakers approved a transfer of $1.1 million from the Public Option Trust Fund administered by the treasurer’s office to Nevada Medicaid to support development of the public health insurance option established by SB420 during the 2021 session.

But the allocation — which helps fund a more than $1 million contract with Manatt Health Strategies, a health care policy company that will help conduct the actuarial analysis needed to establish the public option — sparked concerns about the process used to contract with Manatt.

Several members of the public who attended the meeting asked to be involved in the process of developing the public option, including Tom Clark, representing the Nevada Association of Health Plans.

“Under Senate Bill 420, the state's health plans would offer insurance under the public option. This makes us a key stakeholder in the development of the public option plan,” Clark said. “Our members respectfully request that we are included in these key discussions.”

However, DuAne Young, policy director for the governor’s office, said that SB420 allows for the director of the Department of Health and Human Services to enter into contracts to develop the public option without having to follow the requirements of the state’s purchasing laws.

Senate Majority Leader Nicole Cannizzaro (D-Las Vegas), who sponsored the public option bill, also noted that the contract provides for six public stakeholder meetings that will allow the public to engage in the process of developing the program.

“In looking at this, we're starting off exempting the contracts from the normal process, as far as RFPs and so forth,” Seevers Gasnert said. “I really think, given the potential magnitude of this program, we need to be able to be following the procedures that we have over the years. And there's a reason we have those in place, so I'm not going to be supporting this because I think we're starting off in the wrong direction.”

Nevada Medicaid does not yet have a date listed for a future meeting related to the public option or the Manatt Health contract.

Update: Oct. 22, 2021. This article was updated to clarify that an extension of the DMV technology fee was passed in 2019 on a party-line vote with all Republican lawmakers opposed.