Nevada lawmakers will have $8.5 billion to budget for next two years, $400 million down from current biennium 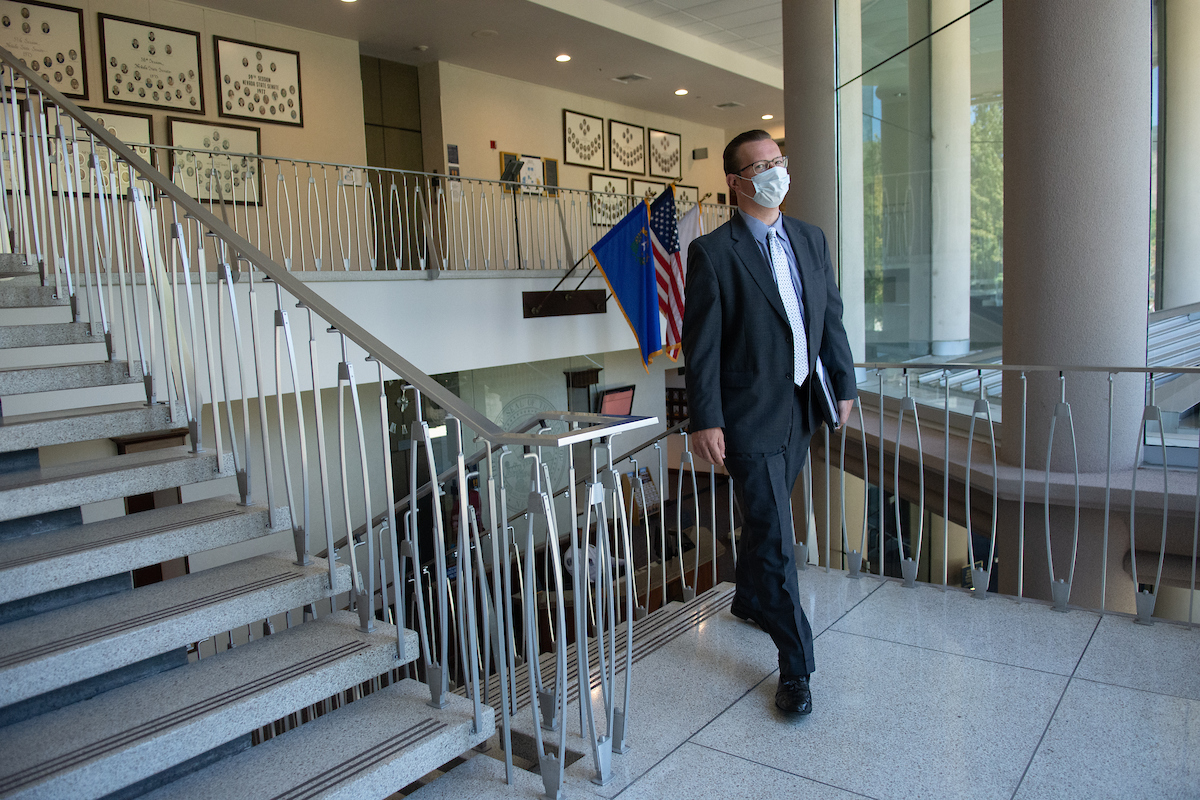 Nevada lawmakers are facing down a legislative session of austerity after a panel of economists projected general fund revenues of about $8.5 billion over the next two years — a figure down about $400 million dollars from the $8.85 billion they projected for the current biennium in May 2019.

Members of the Economic Forum solidified their official forecast in a virtual meeting on Thursday after taking into account the economic damage caused by coronavirus and efforts to slow it, as well as the uncertainty of additional federal stimulus aid. But it also comes against the backdrop of more hopeful news — that hundreds of thousands of Nevadans could receive a COVID-19 vaccine in the next two months, signaling a return to more normalcy.

“That the vaccines are going to start getting distributed — I think that’s encouraging news to a forecaster,” said fiscal analyst Russell Guindon of the Legislative Counsel Bureau.

The forum — a five-member panel of appointed economists and analysts — approved the tax revenue projections after picking between predictions submitted by state fiscal analysts, the governor's budget office and Moody’s Analytics.

Though the forum will meet again in May to set a final revenue projection, the totals approved on Thursday give Gov. Steve Sisolak and the state’s Democrat-controlled Legislature a sense of the playing field as they craft and then fine-tune the state’s two-year budget during the 2021 legislative session. Nevada’s Constitution requires the state to adhere to a balanced budget, not spending more than it brings in.

But the tax revenue projections approved by the forum highlight the level of budget cuts that lawmakers will need to approve come February 2021 after years of sustained growth in the state’s general budget account.

Sisolak last month asked state agencies to prepare up to 12 percent cuts in their budget for each year of the coming budget cycle, down from the levels approved during the 2019 regular session. State agency budget requests submitted in October totaled out to 9.67 billion, so an across-the-board 12 percent reduction would likely bring spending totals in line with the tax revenue projected Thursday by the Forum.

In a statement Thursday, the governor said the Forum's report was a "sober reminder of the devastating impacts COVID-19 has caused in our state."

"This global pandemic has created both a fiscal and economic crisis in our state, and my Office, the Governor’s Finance Office and state agencies will continue the challenging task of preparing an Executive Budget based on our new fiscal reality with the goal of preserving vital services as we plan for a post-COVID future," he said in a statement.

A coalition of more than 60 organizations wrote to Sisolak this week asking him to include tax increases in his budget proposal. The group, which includes an array of unions and other  progressive groups, offered its support, saying it recognized that there would be “significant political capital and support needed to raise revenue, especially during an economic downturn.”

“We ask that as you prepare budgetary recommendations for the 81st Legislative session, you take bold action to diversify and increase revenue streams into the state coffers in lieu of making catastrophic budgetary cuts that will disproportionately harm the most vulnerable Nevadans,” the group said.

The Legislature may also take up two initiative petitions spearheaded by the Clark County Education Association — one to raise a tax on gaming and the other to raise the sales tax. The measures have garnered the required signatures, so barring a legal blockade, lawmakers will have the option of acting on the proposals or punting them to voters in 2022.

Lawmakers held a special session over the summer to cut the budget halfway through the two-year cycle in response to declining tax revenues. The projections approved Thursday for the biennium that starts next summer are $418 million above what the state expects to have collected at the end of the ongoing biennium, given plummeting revenues in recent months.

By fiscal year 2023, the state expects to have rebounded and be bringing in slightly more than the $4.287 billion brought in during fiscal year 2019.

Below are details on the projections that make up the overall general fund forecast.

Forum members predicted the state will bring in $1.39 billion in revenue from gambling taxes in the upcoming biennium —  a number lower than the $1.6 billion the forum predicted in late 2018 for the current biennium.

Gambling revenues are rebounding from an effective standstill earlier this year when casinos were closed for 11 weeks in an effort to slow the spread of coronavirus. The amounts of money that casinos “won” from gambling in both the current fiscal year and the one that finished this summer is the lowest in at least a decade.

Casinos are still suffering as large events that bring gamblers were canceled, current restrictions limit casino floors to 25 percent capacity, and record-setting coronavirus case counts deter people from traveling. Three major casinos — the Rio, The Palms and Virgin Hotels (formerly the Hard Rock) — have yet to reopen, and several other major resorts are closing their doors midweek because business is slow.

But slot play has remained a bright spot that led to tax revenues that overperformed forecasters’ expectations. Slot tax revenue in some parts of the state has returned to pre-pandemic levels as local Nevada residents continue playing even while tourists remain scarce.

Guindon said he’s keeping an eye on whether the stronger-than-expected gambling revenue is a reflection of “cabin fever” and people seeking out casinos in the absence of the full spectrum of entertainment options. Analysts are also monitoring whether gambling will dwindle as the effect of federal stimulus money — including unemployment — wears off.

“I’ve been told by several operators, ‘yes, stimulus is helping.’ And they also feel that it’s wearing off,” said Michael Lawton of the Gaming Control Board.

Nevada’s 2 percent sales and use tax makes up the largest portion of collected state tax revenues, with forum members projecting that it will raise a total of $2.489 billion over the two years of the budget cycle. That’s a drop from the $2.6 billion projection forecasters made two years ago for the current biennium.

But forum members and state fiscal analysts said that any projections regarding future performance of the sales tax would be greatly affected by whether the federal government is able to pass another substantial COVID-19 related stimulus package in the near future, and how large it might be.

Members of the forum had asked staff to prepare two sets of data regarding the sales tax — one scenario estimating a $1.5 trillion stimulus package and one without. Sans a stimulus package, state analysts estimated that performance of the sales tax would not return to pre-pandemic levels until 2023 at the earliest, with the state’s leisure and hospitality sector suffering the most.

Ultimately, members of the forum opted to adopt a projection averaging out the “baseline” scenario including the $1.5 trillion stimulus and the no-stimulus scenario, saying it was the best way to hedge against future uncertainties and because the most recent news on federal stimulus negotiations indicate that the size of the package will be around $908 billion, or about 60 percent of the stimulus scenario.

“So the numbers are big, the variances are big, it's important that we try to get this right with imperfect information,” forum member Linda Rosenthal said. “But given what we know, like I said, I think there will be a stimulus. The question is how much.”

The modified business tax (MBT) is projected to bring in $1.45 billion in the next biennium, or slightly more than the $1.37 billion the forum predicted two years ago.

The majority of the revenue comes from the “general business” category, which has a tax rate of 1.475 percent on wages, excluding the first $50,000 and health-care deductions. Financial institutions and mining businesses have different rates.

The general business category is suffering the effects of widespread unemployment and shrinking payrolls, although it is on the mend.

The remaining two categories, however, have been robust even during the pandemic. The financial institutions category is seeing brisk business as banks have been active in administering federal Paycheck Protection Program loans and playing a part in the mortgage refinancing boom.

Mining payrolls have also grown because mining is countercyclical and generally booms while the larger economy struggles.

The MBT accounts for about 16 percent of Nevada’s general fund revenues.

Nevada’s live entertainment industry suffered a crushing blow as the state enacted gathering limits to prevent the spread of COVID. Even today, the state bans events of more than 50 people or more than 25 percent capacity in a venue, which precludes the large-scale spectaculars that dazzle tourists and employ thousands of artists and production staff.

Revenues from the tax, which applies to tickets, have effectively zeroed out, but the forum is predicting the tax will yield $183 million in the coming biennium. That’s well below the $258 million that forecasters predicted two years ago for the current biennium.

Forecasters don’t expect revenue to return to pre-pandemic levels until mid-2022. Another variable is how long it might take for shows and events that have been dark for months to regroup, and how many will never return.

But a vaccine is expected to make a major difference. Lawton said he believes recovery will be “swifter and stronger than originally anticipated” once capacity caps lift.

The tax is a 9 percent admission charge on a live entertainment venue that seats more than 200 people, although exceptions include tickets to a professional sporting event in which a Nevada-based team is playing — such as a Raiders or Golden Knights home game. The tax accounts for about 3 percent of Nevada’s general fund revenue.

The Commerce Tax, which is assessed on businesses with gross revenues of more than $4 million a year, is expected to yield about $418 million in revenue in the coming biennium. That’s a drop from the $445 million the forum had predicted for the current biennium when it met two years ago.

That’s expected to be reduced by about $89 million when eligible businesses claim tax credits against their MBT obligations.

The insurance premium tax is expected to bring in a little more than $1 billion over the biennium, which is a bump from the $950 million the state expected from the tax when it made projections two years ago.

Other tax credits, including those for K-12 educational scholarships, companies that shoot films in Nevada and businesses that relocate or expand in Nevada, are expected to shave another $84 million from overall general fund revenue.

Updated at 5:31 p.m. to include a statement from Gov. Steve Sisolak.