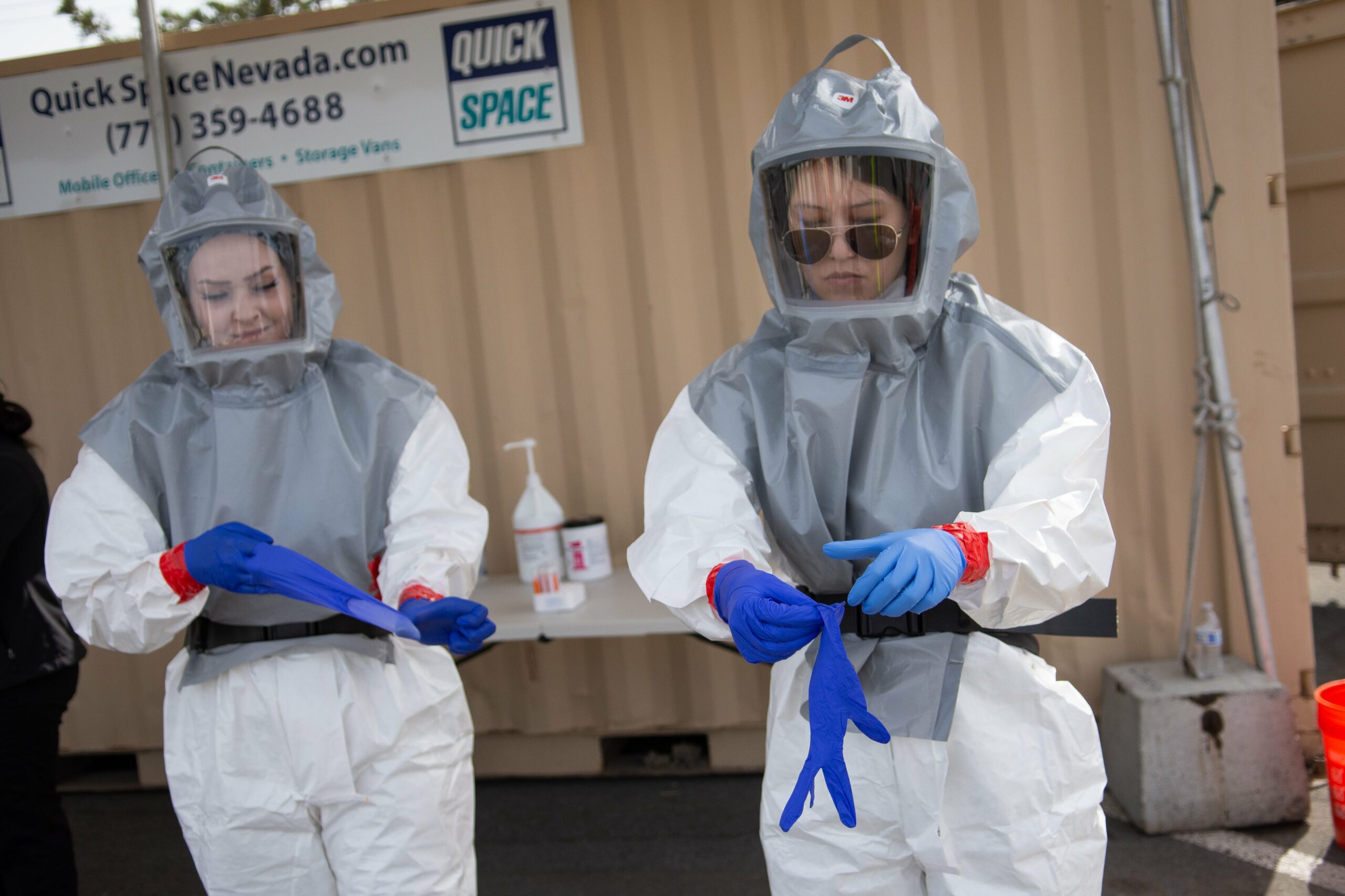 Gov. Steve Sisolak is urging Nevadans to have hope but continue to follow coronavirus health and safety protocols with the state’s first allocation of the COVID-19 vaccine set to arrive as early as the middle of December.

Though the state is still waiting to hear what its first distribution of vaccines will be, immunization officials are already preparing to provide them to health care workers and nursing home residents, in line with new federal guidance from the Centers for Disease Control and Prevention. State officials expect the vaccination distribution process to move quickly following a Food and Drug Administration committee meeting scheduled for Dec. 10.

State officials said that only a portion of health care workers at each facility will receive the vaccine at once, in order to account for any staffing shortages that may occur related to side effects from the vaccine, which may include a low-grade fever and a sore arm. Vaccination of residents of long-term care facilities will be handled by pharmacy chains CVS and Walgreens.

According to an updated version of the state’s vaccination playbook released on Wednesday, Nevada expects to vaccinate the 173,000 people designated as Tier 1, which includes health care workers, Nevada Department of Corrections staff, law enforcement and public safety officials, by the end of January.

It will move fully into vaccinating those in Tier 2 — a broader group of 271,000 people that includes education and childcare staff, higher education faculty, public transportation workers, those who work in agriculture, inmates and others — by the end of February, though those timelines are subject to change based on federal vaccine allocation amounts.

State officials said they are planning at this point for the general public to start receiving the vaccine somewhere between the spring and the middle of next year. There will be no statewide vaccine mandate, though Sisolak noted that some employers could choose to put in place their own requirements.

“I think the bigger problem we’re going to have is that people are going to want to get it as quick as possible as opposed to not getting it at all,” he said.

Which COVID-19 vaccine Nevada receives is up to the federal government, though state officials said it looks like the Pfizer vaccine, which has a 94 percent efficacy rate, will be the first to arrive.

Sisolak said that Nevada continues to collaborate with other Western states through a COVID-19 Scientific Safety Review Workgroup to review the safety and efficacy of any COVID-19 vaccines approved by the FDA. He added that the verification process through that group is happening “in lockstep” with the federal approval process and isn’t anticipated to cause any delay in the vaccine distribution process.

“We're closer to the end than we are to the beginning, and there is definitely a light at the end of the tunnel,” Sisolak said. “There's no doubt that these vaccines will play a pivotal role in helping combat this disease, but it will take time to make sure everyone has access to the vaccine.”

Until then, Sisolak advised Nevadans to stay home as much as possible, avoid large gatherings, wash their hands and wear a mask, describing those measures as a “bridge” until the vaccine is widely available to all Nevadans. However, he said that bridge is “shaky,” citing the still-rising COVID-19 numbers in the state.

There are currently a record 1,652 people hospitalized with confirmed or suspected cases of COVID-19 and more than 2,000 new COVID-19 cases were reported on Wednesday. Sisolak noted that the latest numbers don’t yet reflect any surge in viral spread that may have occurred around the recent Thanksgiving holiday.

“Almost every day we're breaking the previous record,” Sisolak said. “I am concerned. The state health officials are concerned.”

The state currently has 13 days left in a three-week “statewide pause” announced by Sisolak in advance of the Thanksgiving holiday that lowered occupancy limits and once again reduced the size of allowed gatherings to stem the rising tide of COVID-19 cases. Sisolak said that if the state does not soon see a change in its trajectory, it will have to put in place further mitigation measures.

“If this crisis continues to get worse we will be left in the unfortunate position of having to take stronger actions, something I've been desperately trying to avoid in order to balance the economic impacts,” Sisolak said.

Sisolak said he doesn’t plan on putting any travel bans or any travel-related restrictions in place, including any travel advisories, recommended quarantines for visitors before arrival or testing requirements, even as the CDC again urged Americans on Wednesday to not travel during the holiday season.

“It's a difficult situation,” Sisolak said. “You're walking on the edge of a knife trying to balance the economy and at the same time a health care system that has been burdened heavily.”