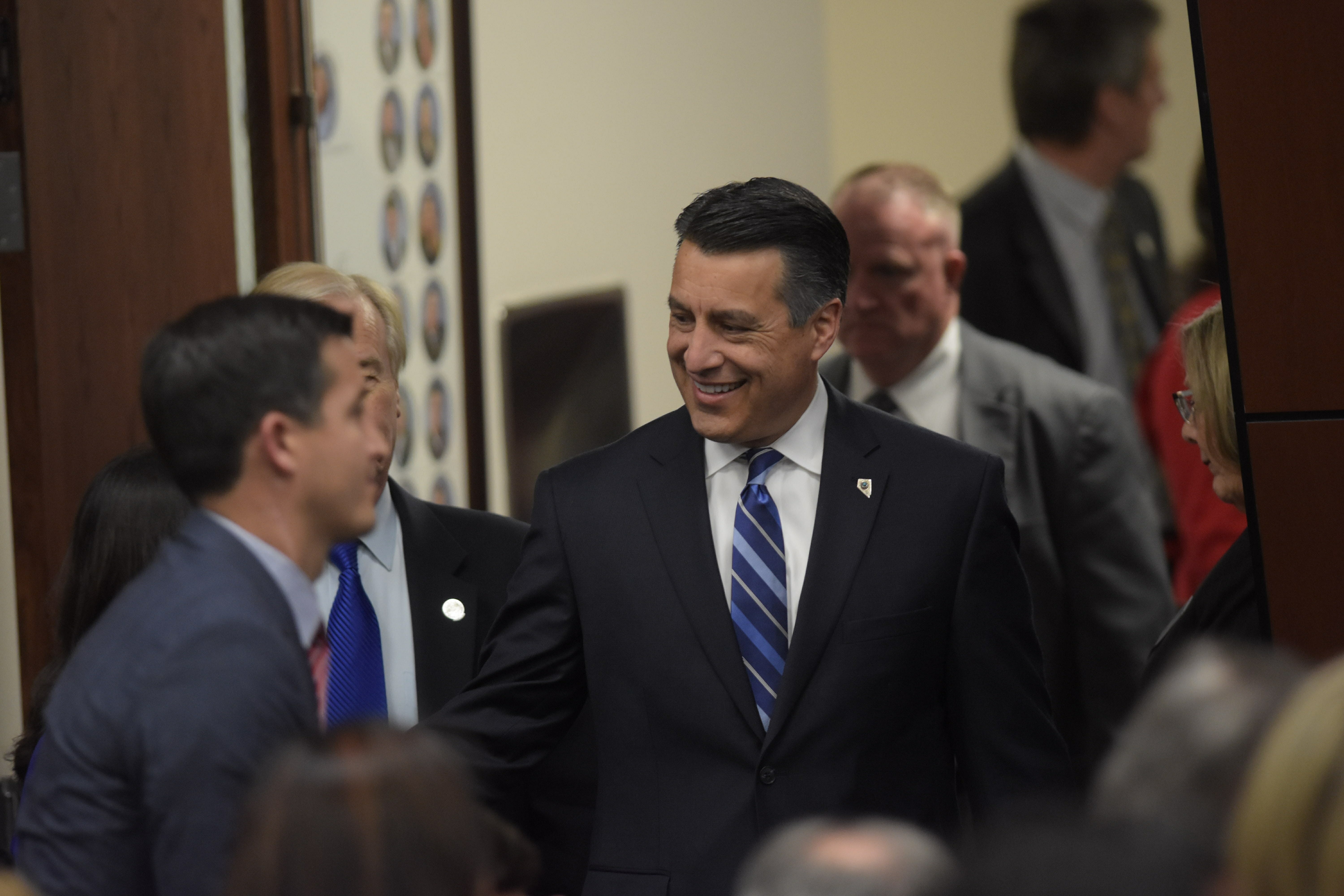 Gov. Brian Sandoval scuttled a plan that would have allowed anyone in the state to buy into a Medicaid-like system of health insurance that had attracted national attention as the first of its kind.

With the stroke of his pen, the governor also vetoed an ambitious measure that would have raised the state’s renewable energy production standards, just hours before a constitutionally-set deadline where all unsigned bills automatically become law. Sandoval vetoed a total of 41 bills throughout and after the legislative session, the highest in his seven years as governor.

AB374, sponsored by Democratic Assemblyman Mike Sprinkle, has attracted substantial national attention in recent weeks as the state flirted with the idea of giving every single resident access to some form of a program similar to Medicaid.

The governor applauded Sprinkle for his “creativity” but rejected the legislation, saying it raised too many questions and needs further study.

“Moving too soon, without factual foundation or adequate understanding of the possible consequences, could introduce more uncertainty to an already fragile health care market, and ultimately affect patient health care,” Sandoval wrote in his veto message.

The four-page bill would have required state health officials to enter into a contract with a health insurer to provide a program that offers similar benefits to Medicaid (excluding emergency transportation services) and open to anyone, available on the state’s insurance exchange. It also would have required them to seek any necessary federal waivers on insurance marketplace rules, and would grant state health officials wide authority to draft regulations on how the proposed “Nevada Care Plan” would work.

Those regulations would also determine what sort of deductible or copay is required of people who enroll in the program that aren’t eligible for tax credits under the federal Medicaid system.

Sandoval demurred on taking action on the bill until Friday, telling reporters throughout the the last two weeks that he was doing a “deep dive” into the policy and how it could play out with the pending repeal and replacement of the Affordable Care Act.

The bill passed on party lines out of the Assembly and Senate.

In a statement, Sprinkle said he was disappointed by the governor’s actions but pledged to bring back the legislation next session.

“Health care is a right, not a privilege or a product,” he said in a statement. “With this veto, Governor Sandoval has actively decided to veto a right that all Nevadans should have.”

In a blow to renewable energy advocates, Sandoval also vetoed an ambitious measure that would have substantially raised renewable energy production minimums in the state over the next decade.

In his lengthy veto message on AB206, Sandoval said he shared the clean energy goals and listed several energy-related measures signed this session, but said his concerns about a pending energy deregulation ballot measure up on the ballot in 2018 that promises to substantially restructure how electricity is produced and sold in Nevada made him hesitate before taking substantial steps forward on renewable energy policy.

On the path to this goal, however, decisions must be responsibly informed with research, study and debate, particularly with the likelihood of the approval of energy choice in Nevada next year,” he wrote. “For these reasons, although the promise of AB206 is commendable, its adoption is premature in the face of evolving energy policy in Nevada.”

Sandoval also used the veto message to amend an executive order forming a commission devoted to studying energy deregulation issues to “study, review and discuss” what an increased RPS would do to the state.

The bill, sponsored by Democratic Assemblyman Chris Brooks, would have required utilities in the state to slowly ramp up renewable energy procurement or generation to hit a 40 percent Renewable Portfolio Standard (RPS) by 2030. The state’s current RPS goal is 25 percent by 2025.

It would have also required large power customers including Wynn Resorts, Caesars Entertainment and MGM Resorts who have paid an exit fee to purchase power on the open market to also meet the higher renewable standards. It also would have created a multiplier compliance credit for use of energy storage systems used in tandem with renewably generated electricity.

The heavily lobbied bill was opposed by several major casinos and business groups, and supported by progressives and a host of renewable energy advocates. It passed on party-lines out of the Senate and with a handful of Republicans and all Democrats in support in the Assembly.

In a statement, Brooks said he was “disappointed” by the governor’s veto and said he planned to bring the measure back in the next legislative session.

“Assembly Bill 206 was supported by countless Nevadans who view clean energy as a critical component of securing a stable economic future for our state,” he said.

Sandoval also vetoed AB408 — requiring the state plan for Medicaid to cover preventive health services and codifying other parts of the Affordable Care Act into state law — and SB392, which would implement and create community solar gardens.

Assembly Republican Leader Paul Anderson released a statement lauding the governor’s decision to reject the bills. He called the Medicaid-related bill “well-intentioned” but echoed Sandoval’s concerns about not fully knowing the the ripple-effect it might cause.

“There is nothing about the legislation that helps control the cost of medical care, and brings no guarantee of actually helping a single Nevadan get the health care they need,” Anderson wrote.

Anderson criticized higher renewable energy production minimums for similar reasons, saying it would “only drive up the cost of power to energy consumers.”

Feature photo: Gov. Brian Sandoval after his 2017 State of the State speech in Carson City.  Photo by David Calvert.