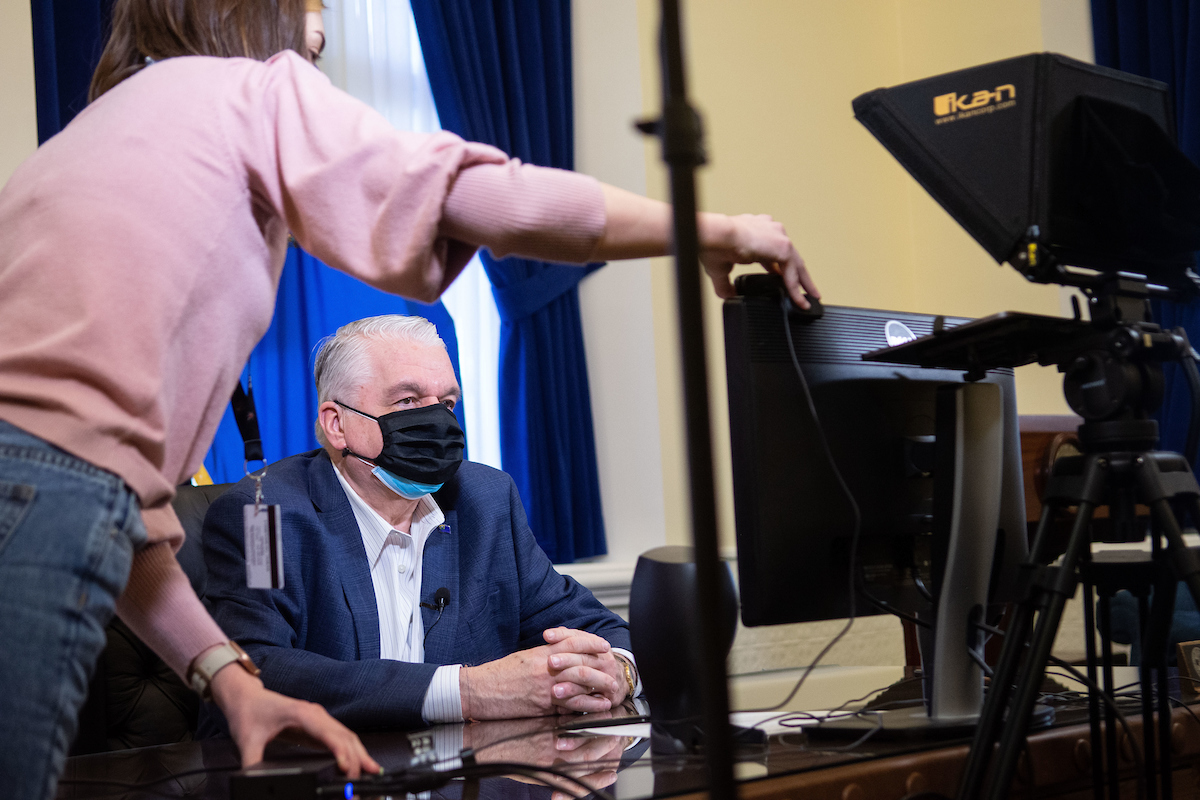 Better than expected tax revenue projection and billions of federal COVID aid dollars poised to soon pour into Nevada will give the state a “once-in-a-lifetime opportunity” to address systemic issues and “transform” the state, Gov. Steve Sisolak said in an address hinting at upcoming spending priorities for this session and beyond.

Sisolak delivered prepared remarks and spoke to reporters briefly on Wednesday, just a day after the state’s Economic Forum released new revenue forecasts estimating that taxes flowing into the state’s general fund will be about $910 million more than initial forecasts in December — including a $586 million upward revision for the upcoming two-year budget.

That better-than-expected budget news, coupled with the estimated $2.9 billion federal windfall coming into the state coffers courtesy of the American Rescue Plan, led Sisolak to promise a restoration of budget cuts to mental health services and public education, an upgrade to the state’s oft-criticized unemployment insurance system, backfilling of the depleted Rainy Day Fund and a host of other as-of-yet undefined spending priorities.

“We must remember that spending is easy. Investing is hard, but investing will always be worth it,” Sisolak said. “I want to commit to Nevadans here in this moment. I am committed to changing our systems, our systemic issues that make Nevada the hardest hit state in the nation when there's an economic downturn.”

The governor’s remarks were echoed by Democratic legislative leaders — Assembly Speaker Jason Frierson (D-Las Vegas) said he hadn’t looked closely at the numbers, but that the positive budget news was “indicative of the fact that over the last year we've done the right thing in making sure that Nevada was being safe and healthy.” Senate Majority Leader Nicole Cannizzaro (D-Las Vegas) tweeted that lawmakers “look forward to restoring critical services and looking ahead to future investments in Nevada and Nevadans.”

Sen. Ben Kieckhefer (R-Reno) said he was happy to hear Nevada would benefit from federal aid flowing to state residents and potential tourists.

“The Economic Forum clearly saw the economic activity that's been happening in our state in recent months and the impact of the successful rollout of vaccines, both here and nationally, and ... believe that we're basically going to be firing on all cylinders,” he added. "I think the expectation is that Nevada is back and we're ready to roll.”

But happiness over the incoming funding doesn’t paper over the challenge facing state lawmakers, who still have to solve a host of major budget-related issues in the final weeks of the session — from restoring cuts based on December revenue forecasts, to figuring out a potential deal on mining taxes and finally implementing the long-awaited K-12 funding formula change.

“It makes it harder,” Kieckhefer said. “A lot of people are suddenly going to have their hand out … it takes a lot of work to decide which of the cuts that the governor proposed we're going to add back, and then figure out what's left, and make sure that we're putting ourselves on a really stable financial footing for the long term.”

Sisolak said he believes there’s broad consensus on certain spending objectives such as bolstering cash reserves and strengthening the unemployment system so it can weather any future crises. The Legislature also will be deciding which proposed cuts in his budget should be restored and which are “legitimate” and shouldn’t be refilled.

And Sisolak also identified other longer-term projects that could be options for spending — modernizing major technology systems in the state, investing in residencies to build a workforce of doctors, addressing food deserts, increasing the number of students who solicit federal aid through FAFSA and reimagining transportation infrastructure.

Some of those priorities may attract buy-in from Republicans — Senate Minority Leader James Settelmeyer (R-Gardnerville) said in a statement that the Economic Forum’s projected rise in tax revenue was “fantastic news” but cautioned against overextending state spending through use of one-time federal funding.

“The Governor and the Legislature must now restore cuts to education and healthcare, fix unemployment, and be mindful of our improving economy,” he said in the statement. “Now is not the time to grow government or overwhelm recovering businesses.”

President Joe Biden signed the $1.9 trillion American Rescue Plan in early March, which included $4.1 billion for state and local governments in Nevada, more than $1 billion for schools and direct $1,400 payments to taxpayers — one of the largest federal aid packages enacted in the country’s history.

State officials are still waiting for guidance from the U.S. Treasury on how they are allowed to spend their allotment. From there, they want to assess what needs can be addressed by one of the more than 90 funding streams coming from the American Rescue Plan to ensure they are not using flexible funding on needs that are already taken care of through other earmarked funds.

Beyond the $2.9 billion headed to the state, huge pots of money are available for specific objectives such as rental assistance and schools — making lawmakers somewhat hesitant to devote state general fund dollars to costs that could altogether late be covered by the coming federal influx of cash.

In early April, Sisolak and Democratic legislative leaders released a broad policy plan dubbed the “Every Nevadan Recovery Framework,” outlining state priorities for use of the $2.9 billion in federal COVID relief funds intended to be spent over the next four years.

The eight-page plan identified four prioritization “bands,” or tiers, for disbursing the money. It prioritized basic health and safety needs such as food and housing first, followed by “community” initiatives such as education, economic expenditures including support for small businesses and workers, and “quality of life” expenditures for services that will help build healthy communities.

On that same day in April, state lawmakers in a joint budget committee approved taking preliminary steps to earmark incoming federal funds to fill more than 300 vacant state employee positions. The estimated cost of the move, which would come during an Interim Finance Committee meeting after the session adjourns, could run north of $20 million.

The larger-than expected windfall is certain to change the tone for the 27 days remaining in the legislative session. Among other things, it could dampen the political will to alter the state’s mining tax structure; observers have said a negotiated deal is more attractive than proceeding to take one or more of three proposed constitutional amendments on the issue to the ballot, but that doing so would require winning over at least a few Republicans.

Asked whether his administration was committed to adjusting the mining tax rate even though the Economic Forum eased the pressure of finding more revenue, Sisolak said. “I still expect them to have to address that in one way or another.”

“The bills are still gonna be coming over from the Legislature,” Sisolak said. “I mean, that's a long term situation that needs to be resolved ... we're in constant communication with leadership and how they're addressing that.”

As for laying any groundwork for additional, ongoing revenue to help support ambitious education spending targets set by the Commission on School Funding, Sisolak indicated that was unlikely this session but remains a goal. The commission had recommended changes to property and sales taxes, but those ideas have scarcely been discussed in the session.

“It's a little naive to think that in the last 24 days, or 25 days of the session, you're thinking of time to introduce something and get it vetted,” he said. “These are major decisions that need a lot of vetting and a lot of discussion, a lot of dialogue, a lot of opportunity for folks to weigh in.”

Policymakers also hinted that they might take their time strategizing about how to spend the federal money. Deadlines to use certain pots of aid are years or sometimes even as much as a decade in the future.

“It's really easy to piddle away large buckets of money on a lot of little things. And there's benefit to all of that potentially. But we have an opportunity to do something that, or a couple things that, really changed the landscape for Nevada long term,” Kieckhefer said. “It's an opportunity that's probably not going to come along again in a long time, and we should think long and hard about the options that are in front of us before we start spending.”