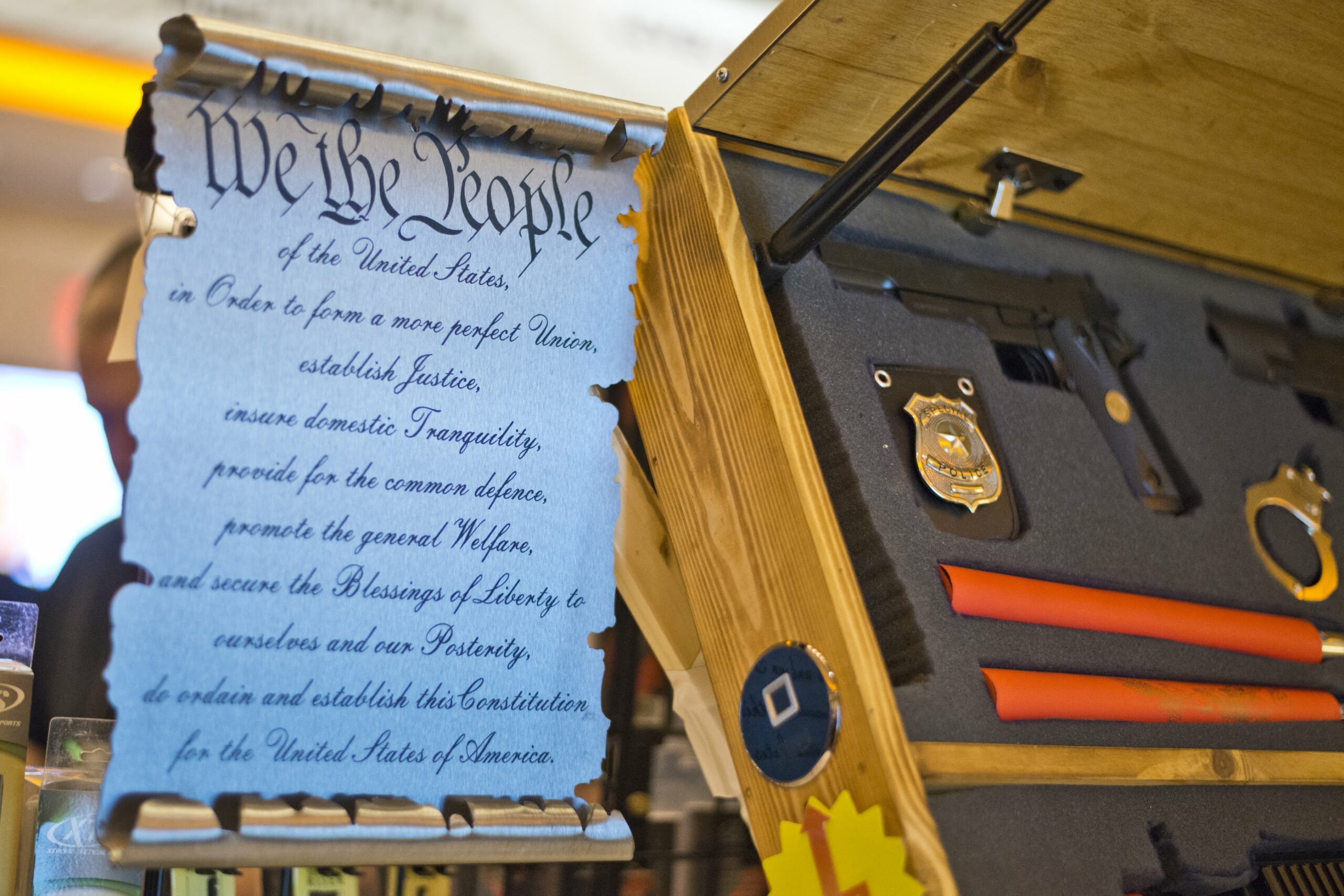 At a gun show last weekend in Carson City, where handguns and scopes and rifles were on display at a community center, Democratic Gov. Steve Sisolak was a bit of a persona non grata.

Gun control bills the governor signed out of the 2019 legislative session — including one requiring background checks on private sales and transfers and another authorizing temporary gun confiscation for people showing behavioral “red flags” — just took effect this month. Although the red flag law has not yet been used in Nevada’s two largest counties, it has attracted a lawsuit, and both laws have drawn defiant statements from rural officials and frustration among gun owners.

“It's very important for people to be able to defend themselves and also to remind the government that we're not to be pushed around,” Lee Vela, a gun seller at the Northern Nevada American Dream gun show, said on Saturday. “That goes for the federal government, that goes for Steve Sisolak, and the state government.”

SB143 implements a 2016 ballot initiative that requires background checks on private gun sales and transfers, instead of only on licensed gun dealer sales. AB291’s “red flag” provisions allow family and household members as well as law enforcement to petition a judge for a court order that allows for seizure and suspension of firearms possession for up to a year.

Vela argued that the Second Amendment guarantees him autonomy and protection and said he is worried the new laws will infringe on his rights.

“I've been carrying myself for 40 years to Vietnam and beyond, and I've never shot anybody in anger, never pulled the gun in anger, but I will if I have to defend myself, loved ones or the general public at hand,” he said.

Fellow gun salesman Matt Park chimed in and said guns are not the problem, “the ones that don’t obey the laws are the problem.”

Comments from the gun show stand in stark contrast to those of gun control advocates, who attribute public safety concerns to Nevada gun control laws that are lax in comparison to states such as California.

For some Las Vegas residents and gun control advocates, an isolated shooting that injured three people at the Fashion Show Mall in Las Vegas last week brought flashbacks of a larger-scale incident of gun violence that took place over two years ago: the Oct. 1 shooting in which a man who had smuggled guns into his Strip hotel room killed 58 and wounded hundreds at a concert that was taking place 32 stories below, across Las Vegas Boulevard.

Annette Magnus, executive director of the political advocacy group Battle Born Progress, said in a statement that existing gun laws are still not enough to prevent large- and small-scale gun violence. She called it a “twist of poetic irony” that the lobbyists who fought against local jurisdictions’ ability to make gun control laws stronger than those in the state at large were representing the Shooting, Hunting, Outdoor Trade (SHOT) Show — an event that was happening the same day as the mall shooting.

“In reaction to news reports of shots being fired, our Las Vegas community was once again panicked at the possibility of losing loved ones to yet another mass shooting. Thank goodness that turned out not to be the case,” Magnus said. “Those following the movement for sensible gun violence prevention during the 2019 legislative session may recall representatives of the SHOT Show and the gun lobby pushed hard to kill attempts to repeal state preemption of gun laws.”

Originally, AB291 was written to allow local governments to “pre-empt” state gun laws, allowing for more stringent rules if municipalities wanted them. But after labor unions raised concerns that such a provision would cause the SHOT Show — the nation’s largest trade show for the sport shooting and hunting industry — to relocate, pre-emption was removed from the bill.

On the other hand, sheriffs across the state have pushed back at the new gun laws, saying that they violate the Second Amendment and due process. Moreover, several county commissions have signed “Second Amendment Sanctuary” resolutions essentially declaring their intent to disregard gun laws they believe to infringe on constitutional rights.

Dorin Adika, a gun seller from Florida with Dorin Technologies, hosted a booth at the SHOT Show last week and described how sometimes background checks fail to uncover issues but said he supported background checks “as long as they actually work.”

SB143 transferred the responsibility of background checks to the state’s Department of Public Safety, whereas before, voter-approved language in the law called on the FBI to conduct the background checks. The Associated Press reported that the FBI’s database has proven unreliable and incomplete in other states.

Las Vegas has the misfortune of being the site of the deadliest mass shooting in recorded U.S. history, and testimony from survivors helped propel an effort in 2019 to expand mandatory background checks to more gun sales and transfers.

Nevada voters had approved background checks by ballot initiative in 2016, but implementing the law proved difficult when the FBI refused to perform the checks.

For comparison, the state conducts about 100,000 gun background checks a year — it has been required to do them on sales from licensed gun dealers.

New background checks and red flag laws aside, Nevada has no laws requiring licensing for gun owners nor any requiring registration of firearms. The state does not have restrictions for assault weapons or large-capacity magazines lawfully purchased by the Las Vegas shooter, enabling him to inflict mass carnage in a matter of minutes.

Less high-profile than background checks, a new “red flag” law — based on a concept authorized and studied in other states — is garnering perhaps the most backlash of the new gun control laws.

The measure, enacted through AB291, gives family, household members or law enforcement the ability to file Extreme Risk Protection Orders, which allows law enforcement, by a court order of up to one year, to seize firearms and prohibits possession or purchase of firearms for the duration of the order. AB291 also includes a provision that prohibits trigger-accelerating accessories, such as the bump stocks used by the Las Vegas shooter.

Bump stocks were also banned at the federal level in early 2019.

Seventeen other states have implemented red flag laws as of 2020. Connecticut was the first state to enact red flag laws in 1999 and research has shown that the law correlates with a reduction in firearm suicides, but not necessarily in other forms of suicide or firearm homicides.

As part of the study, researchers also found that firearm suicides dropped by 1.6 percent in Connecticut immediately after the law passed and when enforcement of the law increased following the mass shooting at Virginia Tech in 2007, reduction of firearm suicides rose to 13.7 percent.

In the 10 years after Indiana’s implementation of a red flag law in 2005, researchers added the state saw a 7.5 percent decrease in firearm suicides. However, the study also noted that data about suicide reduction in relation to red flag laws was still inconclusive when comparing Indiana to Connecticut.

“Whereas Indiana demonstrated an aggregate decrease in suicides, Connecticut’s estimated reduction in firearm suicides was offset by increased nonfirearm suicides,” the study said.

Attendees of the Northern Nevada American Dream gun show in Carson City acknowledged the need to reduce deaths from guns but said they were concerned about the potential for false allegations.

“I don’t think it’s a good law. I think they could take advantage of that situation real easily,” said Dave Rhines, a 61-year-old gun owner from Carson City.

“I was accused of something a while back. It cost me $8,000 to prove my innocence, and they dropped all the charges, but it still cost me eight grand. Same thing [with the red flag laws]. They can accuse you of something and you’re guilty until you’re proven innocent,” he added.

The new laws have underscored and in some ways widened divides between Democratic lawmakers, the governor and sparsely populated rural counties, some of which have mulled legal action to challenge the new requirements.

On Friday, the Humboldt County Board of Commissioners discussed joining a lawsuit filed by the conservative nonprofit group NevadansCAN, challenging the constitutionality of the red flag law. According to the Humboldt County clerk, no action has been taken yet.

Plaintiffs are concerned about due process and called the lawsuit a “government power grab.” They added that the red flag law was unconstitutional because a judge was making the decision to remove a citizen’s gun as opposed to a jury.

Justice Lidia Stiglich authored the order, which called the law a “prohibition on the right to bear arms as guaranteed by both the United States and Nevada Constitutions.”

At the Carson City gun show, 70-year-old John Abrahamian said he had been around guns all his life and views guns as tools.

“Red flag gun laws — as a gun owner, I bristle a little bit at it. Why is somebody telling me what I can and cannot do? It is one of the basic American freedoms,” he said, adding that “education is huge,” when it comes to maintaining public safety in a society that allows gun ownership.

“Somebody gets up on a tower, knocks a window out of a building, and starts shooting people for what reason will we ever know? I don't know. And it reflects on all of us,” he said.

Yolanda Donato came to the gun show in Carson City with her husband and said she owns guns to protect herself. She echoed Abrahamian’s call for increased education and emphasized the need for training.

“I think that those who are opposed [to guns] need to really educate themselves and I know that there's a lot of bad things that go on in the country and it's very concerning,’ she said. “Part of [the reason people might be anti-guns] is mostly fear. A lot of them probably have young children. I can understand that.”

For some, the polarization and high emotion on both sides of the issues has prompted them to largely keep quiet about their interest in guns.

Twenty-two-year-old Hector Escobar, a granite fabricator from Carson City, says his coworkers are gun enthusiasts, and he appreciates the craftsmanship of guns. He has never owned a gun but was considering buying one at the American Dream gun show.

He perused tables featuring a variety of guns and explained he has an interest in firearms but does not usually discuss them with strangers.

“I feel like [talking about guns is] one of those conversations that's kept behind doors,” he said. “You don't really go out and be like, ‘Hey, what do you think about guns?’ I feel like you know when someone has a common interest in it and so it'll strike up a conversation, or it can put a conversation to an end."