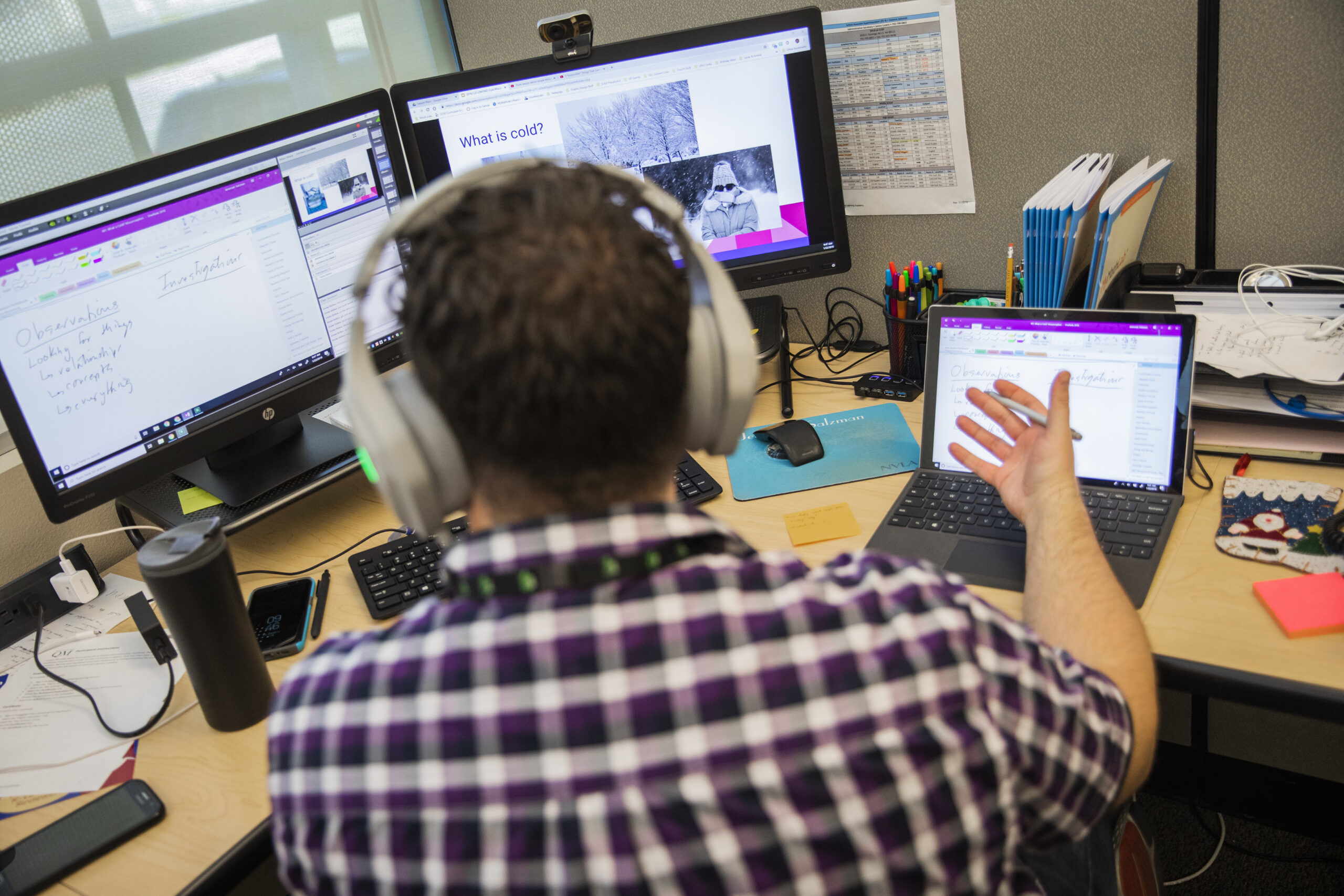 The mammoth bill designed to overhaul Nevada’s school funding formula — a feat years in the making amid mounting pressure — made its public debut Monday. SB543, as it’s formally known, was introduced in the Senate on the 99th day of the legislative session.

“We have spoken with the constituents that live in our districts and we have promised to them that our top priority was to improve Nevada's public schools,” Democratic Senate Majority Leader Nicole Cannizzaro said during a press conference after the bill was introduced. “Modernizing our approach … to the funding formula is a pivotal step in that process.”

With just three weeks left before lawmakers gavel out, that leaves a lot to digest before possible passage. A hearing next week will shed more light on the plan, but in the meantime, here’s a primer on the high-profile bill:

Why is a new formula needed?

Nevada’s education funding formula, called the Nevada Plan, is the oldest in the country. Since the formula took effect, Clark County has grown fivefold.

“In 1967, when the Nevada plan went into effect, I was a classroom teacher and I can tell you firsthand that our classrooms look a lot different today than they did then,” said Democratic Sen. Joyce Woodhouse, who has been active in developing the bill.

Democratic Sen. Mo Denis, a key architect of the bill who was a child when the existing funding formula took effect, said the evidence is in classroom photos. His school had few Latino students; now the Clark County School District is majority-minority, with white students making up fewer than 25 percent of the student body.

Another reason for a revamp is the complexity of the existing formula, which functions like a seesaw, with state funding reduced when local revenue rises. On top of that, “categorical” programs and class size reduction grants add to the basic state support.

“The difficulty in the Nevada Plan funding mechanism is that there are so many different … education resources, it's often unclear where resources are coming from and where they're going,” Denis said.

How did the plan come about?

Woodhouse and Denis said they have been working on the formula in earnest in 2014, when they chaired interim committees focused on studying a weighted funding formula.

A second study on the funding formula, conducted by the consulting firm Augenblick, Palaich and Associates, was completed in 2018. From there, the two lawmakers hosted two eight-hour workshops with all school district CFOs in attendance to understand what was and wasn’t working about the existing formula.

Woodhouse said lawmakers, legislative staff, the Nevada Department of Education and analyst Jeremy Aguero have been working since the beginning of the legislative session to craft the bill. More recently, they presented the plan in private briefings with business leaders, education groups and fellow lawmakers.

What taxes will support schools?

The bill does away with the state’s main education fund — the Distributive School Account — and instead creates the Nevada State Education Fund. Aguero said there are more than 80 revenue sources in the state that fund K-12 education in some way, and all of those state and local sources would be funneled into a single pot.

“This transparency will eliminate the distinction between state and local revenues and allow oversight of where our education dollars come from and how they are allocated,” Denis said.

Based on how much is available in that pot, the state determines a “base” funding amount that will apply to all students.

Are any education funds excluded from the formula?

Yes. Federal money earmarked for education cannot be used to calculate or serve as an appropriation for the statewide base per-pupil funding. It must be accounted for separately in the State Education Fund, created by the new formula to replace the Distributive School Account.

Federal funds don’t make up a big portion of the state’s overall education budget. The most well-known forms of federal education funding are Title I programs, which provide money to schools serving large numbers of low-income students and money doled out through the Individuals with Disabilities Education Act (IDEA).

What about education spending that is outside of per-pupil funding?

The Nevada State Education Fund provides money for purposes beyond the base per-pupil funding and weights. The proposed new formula creates a waterfall-like distribution system that funds K-12 needs from top to bottom.

“There are certain programs like the Office of the State Superintendent, for example, that never actually make it to school districts and so those pieces have to be allocated first,” Aguero said.

The fund also must appropriate money toward services such as food and transportation for students.

What is the Commission on School Finance?

SB543 would enact a powerful body called the Commission on School Finance charged with a variety of tasks. The governor and legislative leaders would appoint people to serve on the 11-member Commission, including four chief financial officers representing school districts of varying sizes. No lawmakers would be allowed to serve.

Under the proposed legislation, the commission would oversee the implementation of the new funding formula by monitoring progress and providing guidance to school districts and the Nevada Department of Education. Arguably its most important initial task is recommending the “weights” — or multipliers of base funding — for specific student populations. The commission would review the statewide base per-pupil funding as well as the weights each biennium and recommend any changes to the governor and Legislature.

Another responsibility: reviewing and offering recommendations related to the “cost adjustment factors,” which take into account the cost of living and labor for each school district.

SB543 also gives the Commission broad authority to “review the laws and regulations” for education in Nevada and offer recommendations that “would improve the efficiency or effectiveness of public education.”

How do the “weights” work?

The mantra behind a weighted funding formula is, “Let the money follow the student.”

What that means in a practical sense: Students with specific needs will receive extra per-pupil funding, which is designed to help their schools provide the appropriate services. The proposed legislation calls for weighted funds for students who are learning English, living in low-income households, have a disability or are gifted and talented.

A weight is a multiplier of base funding. So students in any one of those categories would receive the base per-pupil funding plus extra money calculated by the weight. The weights have not been determined yet.

Students who qualify for more than one weight only will receive the largest one; however, students can benefit from any services and programs in each category for which they qualify. Simply put, if a student assigned a disability weight is also an English language learner, he or she could benefit from those programs, too.

SB543 states that weights must be distributed directly to the schools serving the students who receive the extra funds. The weighted funding cannot be put toward employee salaries or benefits or used to settle disputes with unions — the money is not in play in arbitration.

What happens to “categorical” programs, such as Zoom Schools and Victory Schools?

As the weighted funding takes effect, the categorical funds would disappear, but the formula’s authors said the intent is to continue the same services and programs.

“The concepts of Zoom Schools and Victory Schools will be replaced with the concept of Zoom services and Victory services to make sure the programs that have worked in the past can be rolled out and can be adopted and utilized to all students that need them throughout the state,” Aguero said.

The amount of funding existing Zoom and Victory schools receive could change, depending on the weights and enrollments of at-risk and English language learner students. Aguero argued that schools receiving significant Zoom grants from the state because they have a high English learner population probably also have many non-English learner students who are living in poverty; thus, they would still receive a significant amount of funding through the weights and would not suffer greatly from the transition to the new funding formula.

Although bill proponents like that weights mean money follows the student, Aguero said districts will also have some flexibility. A school with two English learners, for example, would not have enough money from the weights to afford a separate employee to work with those two children, so the district would be allowed to move money in ways that create a critical mass of funding to provide meaningful services.

Will rural school districts suffer under the new formula?

Aside from the base funding, the formula calls for adjustments that reflect the challenges rural districts face with smaller student populations and less density.

The bill also includes “hold harmless” provisions, meaning no district will receive less money going forward than it is receiving this school year. Aguero said he believes 12 rural districts will benefit from that provision because the formula would otherwise reduce their allocation.

But lawmakers representing rural areas are troubled by the funding formula, saying it will freeze some districts’ funding levels and won’t let their funding grow to reflect enrollment growth during the transition to the new formula.

Aguero said the situation would get better for the districts after a few years, or the state could allocate more money to them that would help the process along.

“Generally speaking if that school district was to grow, they will move more quickly into the new plan… To be sure, as some school districts grow in enrollment, their per pupil levels would drop because they'll be held there, but as soon as they flip over, they'll receive more money on the alternative plan.

Groups such as the Nevada State Education Association say even a few years of rural school district funding holding flat is an unacceptable situation.

Does the formula address the need for new classrooms and school buildings?

No. The plan only addresses operating expenditures.

Does it address “adequacy” in education?

A 2018 funding formula study set targets for what Nevada would need to spend to fund education adequately and ensure student success.

But the bill does not adopt any targets on adequacy.

“We've said all along that in order to get to your adequacy that we really have to have a transparent way of allocating funds,” Denis said. “And so that's why we've worked on the funding formula. This is for me the most critical piece in education funding ... to have something so that when we go to a constituent and they ask us, ‘Well how are you spending your dollars today?’ this funding formula allows us to do that.”

How much funding would each school district receive under the new plan?

This is the big unknown. The proposed legislation doesn’t list dollar amounts for each school district. But it mentions the Commission on School Finance will be studying that issue.

SB543 says the commission would calculate funding for the 2019-2021 as if the formula were in effect and then compare it with the actual funding levels for that period. The advisory body could then make any recommendations to the governor and Legislature based on its findings.

Does it take effect immediately?

No. The budget process for the 2019-2021 biennium is too far underway for the bill to be passed and implemented in time. Plus, the Commission on School Finance will study the funding projections ahead of the transition.

Aguero said implementation would begin in the 2021-2022 school year.

How does the plan address charter schools?

What are the next steps in the legislative process?

The bill is in the Senate Finance Committee and is expected to get a joint hearing along with the Assembly Ways and Means Committee sometime next week. It’s exempt from standard legislative deadlines.

This story was updated at 7:49 a.m. to correct information about charter schools and the first year of implementation.