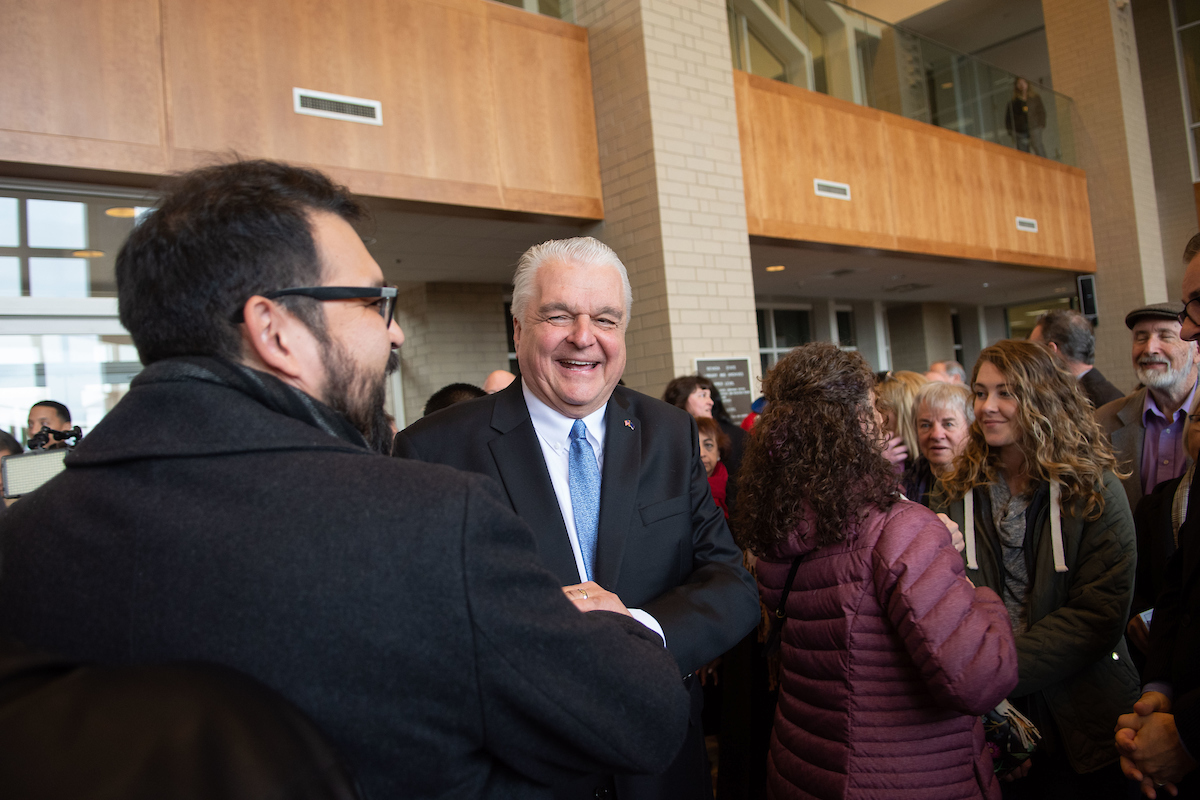 In an effort to help school districts that say they can’t afford teacher raises promised by Gov. Steve Sisolak, state lawmakers have introduced two measures designed to increase or free up millions of dollars in education spending.

At a press conference in his office on Tuesday, Sisolak said both measures — a bill placing all funds from a 10 percent tax on recreational marijuana in the state’s main education fund and another measure authorizing counties to raise the sales tax for social and educational services — would help fulfill promises made in his State of the State for a 3 percent teacher pay raise and two consecutive 2 percent “merit” pay increases over the two-year budget cycle.

Speaking alongside legislative leaders and state Superintendent Jhone Ebert, Sisolak also addressed the state’s teachers and reiterated his pledge to secure funds for a pay raise.

“We have not stopped working to get you the raises we promised at the very beginning of the year, because everyone standing here with me believes you deserve it,” he said. “I've been working with legislative leadership and fiscal staff to fence off the funds for those raises to ensure that money makes it directly to educators’ pockets.”

The bill comes just a day after Democratic senators introduced a long-awaited measure that seeks to overhaul the state’s K-12 school funding formula, but doesn’t increase any education funds and wouldn’t take effect for at least two years. It also comes as lawmakers look for funds to fulfill Sisolak’s promise of a 3 percent teacher pay raise — something the nonpartisan Guinn Center said would require roughly $107 million in funds not included in the governor’s budget.

It also comes after members of the Clark County Education Association authorized a strike at the beginning of next school year if education is not adequately funded.

To allow for the raises, legislators have introduced one bill, SB545, which would move an estimated $120 million in funds from the state’s 10 percent recreational marijuana tax to the Distributive School Account, the primary account for K-12 education in the state. The funds — initially intended for the education budget when proposed by Gov. Brian Sandoval in 2017 —  were originally put in the state’s Rainy Day Fund amid a last minute breakdown in legislative negotiations, though lawmakers backfilled the expected revenue in the two-year budget and schools never actually lost funds they expected.

Sisolak’s current budget proposal directs that marijuana revenue support the Millennium Scholarship and several school safety initiatives such as more social workers. He said he plans to find other ways to support those projects, and said he hoped to be able to fund them at the same levels prescribed in his budget.

The other part of the puzzle is a substantial amendment proposed by Assembly Speaker Jason Frierson to AB309, a bill that originally called for streamlining the accounting of state education funds. If the amendment is adopted, it will authorize the county to raise the sales tax by a quarter of a cent per dollar. Based on fiscal year 2017-18 taxable sales, such a tax increase could raise about $106 million a year in Clark County and $21 million in Washoe County.

Sisolak also expressed frustration at the perception that his budget did not fully fund the promised teacher raises, saying that reconciling his budget with the needs of schools districts has been one of his “most difficult challenges” since taking office. Last month, Clark County Superintendent Jesus Jara said that the district would not budget for the teacher raises amid fears that rising costs and enrollment would eat up whatever extra funds given by the state.

“We fully funded 3 percent pay raises, and then there's deficits of a moving target,” Sisolak said at the press conference. “It was $16 million, $90 million, $120 million, $180 million. I don't know what the number is. I can tell you that these men and women behind me are doing everything humanly possible to find every dollar we can put in. I can tell you the system is structurally flawed. We need to fix the system. The number keeps changing. It keeps moving.”

Frierson said the amendment was intended to give school districts flexibility in education spending while working within the confines of the proposed revamping of the funding formula.

“This isn't the end,” he said, “this is the beginning of us trying to provide more funding for public education, but it is certainly a good step, and a good step towards transitioning as we move on to further policies that provide some stability for our student funding process.”

The amendment to AB309 also calls for specific payments to school districts out of the state’s Account for Programs for Innovation and the Prevention of Remediation, which holds money used for “categorical” programs such as Zoom Schools and Victory Schools.

The payments — worth $38.6 million over the two-year budget cycle with the bulk ($26 million) going to the Clark County School District — are allowed to be used for teacher incentives, Nevada Ready 21 technology programs, professional development and purchasing library books. But they can also be used for general operational expenses if the district wants.

The bill language allows the state to disregard certain laws over the next two years regarding basic financial support and educational materials for programs for profoundly gifted pupils.

Raising the taxes would require either a two-thirds majority vote by members of a board of county commissioners, or a majority of votes if it were sent to the ballot in the next election. The Clark County Commission is made up entirely of Democrats. Because the bill authorizes and doesn’t require a tax increase, it isn’t subjected to the normal requirement that any tax bill pass with a two-thirds vote.

“I can assure you that any proposal that comes before them, will be vetted thoroughly with people having an opportunity to weigh in,” he said. “Whatever they want to do with them, that'll be their decision.”

Clark County Commissioner Tick Segerblom said he would support such a proposal as long as it was in addition to the main education budget account and stayed in the county in which it was raised. Fellow Commissioner Justin Jones said in a text message he hadn’t seen the bill and wouldn’t be commenting further.

The other five members of the commission did not immediately respond to requests for comment.

Proceeds from the tax would be restricted to supporting early childhood education programs, anti-truancy programs, anti-homelessness programs, increasing affordable housing or for incentives for recruiting teachers to schools with high levels of vacancy.

The bill also contains language allowing for a special audit of school districts during the next legislative interim period, focusing on the distribution of federal, state and local money and whether it ensures “intradistrict equity.”

More than a year ago, the Clark County Education Association began advocating for a local revenue stream that could supplement education funding. The union received pushback, however, from the Legislative Counsel Bureau, which said passing a local tax directly for classroom instruction could create inequities in school districts across the state.

The amendment to AB309 solves that problem by restricting the additional sales tax revenue to specific purposes that would be constitutionally permissible such as pre-kindergarten, Vellardita said. It also establishes a program outside a school district’s general fund that would reserve money for teacher raises.

Vellardita called the multi-faceted amendment “one piece of the puzzle” toward achieving more public school funding.

Even so, the union boss declined to comment about whether the amendment would ward off a possible teacher strike. CCEA members voted to authorize a strike next school year if funding goals aren’t met by the end of this session.

Sisolak said during the press conference that he would welcome increased transparency, again expressing frustration at a “moving” deficit reported by the Clark County School District.

“I think maybe this is going to cause increased transparency, and I think that's a good thing,” he said. “But when you get a budget that we fully fund, and then you're told a couple of months later, geez, we're short $120 million and the outcry is, ‘How did my administration and this leadership not fund it?’ That's not fair. We fully funded those budgets and that story's not being told.”

Earlier Tuesday, the Clark County School District posted its final budget for the 2019-2020 school year online. The School Board of Trustees will consider the budget at a special meeting next week.

“There are no major changes from the tentative budget presented to Trustees in April, as we do not know how much additional funding we will receive from the Legislature,” district officials wrote in a statement accompanying the final budget. “We can re-open our budget at any point before December to add in additional funds, including dollars for employee raises.”

But district officials rejected Sisolak’s accusation that they have provided him with different budget numbers as the parties seek to make promised teacher raises a reality.

“We have been communicating regularly with the Governor’s staff since the beginning of the Legislative session to identify funds for the proposed employee raises,” according to a statement released by the district. “We have reported consistent numbers and stand behind the numbers we have provided to the leadership in Carson City. We look forward to continuing that collaboration as one team in order to best serve our employees.”

Republican Senate Minority Leader James Settelmeyer said he had only heard the concept and still wanted to read the bill before making a decision on how he’d vote on the measure, but said the county-specific sales tax wouldn’t amount to a “hill of beans” for the state’s rural counties, and seemed at odds with the ideas in the revamped funding formula bill, which pools local and state sources of education funding.

“If you agree with that philosophy, how can you then say we should allow each county to implement their own tax and keep their own money?” he said. “I’m having a little problem with the two theories.”

Diana Strickley, a teacher at Red Rock Elementary School in Las Vegas, said she goes home exhausted every day, sometimes in tears. While testifying in support of the bill, Strickley said her school experiences high staff turnover and has many students dealing with trauma who need stability the most.

“We don’t just (teach) reading, writing and arithmetic,” she said. “We are also trying to teach these children that there is hope in this world, and how do we do that when we don’t have hope for ourselves?”

Nobody testified against the bill, and only three people testified in neutral to raise concerns.

Kenneth Retzl of the Guinn Center for Policy Priorities said he worried that the formula relied too heavily on the sales tax, which is “regressive” because it affects all Nevadans as opposed to those with more means. He pointed out that Nevada already ranks relatively high among the states for its average sales tax rate.

Rebecca Garcia, president-elect of the Nevada PTA, said the bill relied on county commissions authorizing a sales tax hike, which is not guaranteed. And she said she worries that it could exacerbate funding inequities from county to county, with larger and wealthier counties having an advantage over smaller ones.

“It’s passing the responsibility of the state to counties,” she said. “The needs of many students in our state will continue to be unmet.”

No action was taken on the bill during the hearing.

Updated at 4:13 p.m. to add details from a press conference with Gov. Steve Sisolak and again at 4:41 p.m. to include information from the school district. It was also updated at 5:19 p.m. with comment from the Clark County Education Association. The story was updated at 8:38 p.m. with information from a bill hearing.