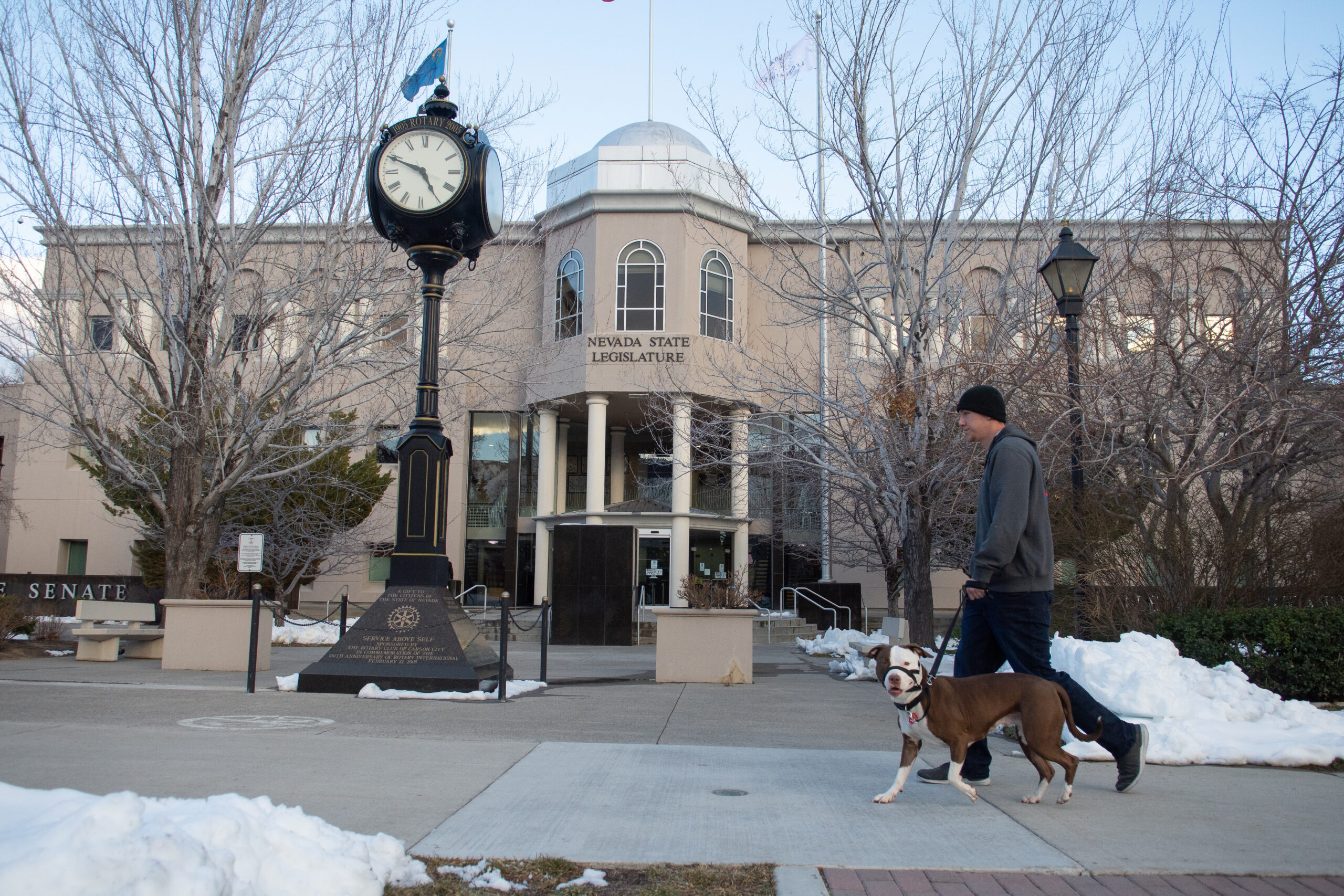 In this edition: Recapping a Q&A with the head of the state mining association, how one lawmaker went viral on TikTok and details on a bill aimed at getting more Native American involvement in the naming of geographical places. Plus, a look ahead at this week’s major bill hearings.

“Is the Nevada mining industry paying its fair share?”

You’d be forgiven for thinking that those headlines refer to the efforts from the 2020 special session and current legislative session to raise the constitutional cap on the net proceeds of mining taxes.

But all of those stories linked above are from a decade ago, when lawmakers and progressive advocates facing record budget shortfalls and a sluggish economy looked to the state’s countercyclical mining industry as a way to avoid massive revenue shortfalls.

Those efforts a decade ago fell short; the late Assemblywoman Peggy Pierce’s bill reducing the amount of deductions that mining companies could apply against the tax never passed out of committee in the 2011 session, and an effort to take the entire section on net proceeds out of the Nevada Constitution fell short on the 2014 ballot.

But I don’t think many involved in the conversation about mining taxes in 2021 will tell you that past will be prologue; the Legislature has changed tremendously over the past decade, with more and more of the state’s political power centered in Southern Nevada and away from mining-dependent rural communities.

If anything, the huge advertising and PR blitz that the Nevada Mining Association has embarked on between the end of last year’s special sessions and the 2021 session is proof enough that the industry is at least somewhat concerned that lawmakers could again push through a mining tax hike (though likely through the ballot box, as the two-thirds majority for a tax increase remains a high bar).

I was curious heading into session as to how the Nevada Mining Association would approach the still-pending proposed constitutional amendments, which is why I reached out to association President Tyre Gray for an interview (published today on our website).

Gray confirmed that the association is still “neutral” on AJR2, the “compromise” proposed constitutional amendment that was a product of negotiations between the industry and Speaker Jason Frierson.

But if there’s one thing I’ve learned in covering the Legislature, it’s that “neutral” testimony is rarely actually neutral. It seems clear that the mining industry still doesn’t really like the proposed tax changes. Gray said that the increased 12 percent net proceeds cap is still “beyond our comfort level as an industry” and would mark a “fundamental change to the mechanisms by which we're accustomed to being taxed in the state of Nevada.”

(Gray also mentioned a “trailer” bill that would change the net proceeds calculation — another piece of the mining taxation puzzle to keep an eye on.)

If you’re confused or would like to know more about the mining taxation debate beyond the normal talking points, (incoming cheap plug alert) The Nevada Independent is hosting a free panel on the topic on March 16, with longtime mining lobbyist James Wadhams, Progressive Leadership Alliance of Nevada Executive Director Laura Martin and former Legislative Counsel Bureau Director Lorne Malkiewich.

The event is being hosted by my talented colleague Daniel Rothberg and Editor Jon Ralston — you can see the event details on this page.

With members of the Legislature now born as recently as 1996, it was only a matter of time that TikTok would come into play in Carson City.

But we were still impressed to see that Democratic Assemblywoman Selena Torres’ efforts to engage with young Nevadans through the platform — which limits videos to 60 seconds and rewards good music and humor — have quite literally gone viral. At last check, a clip of her and Republican Assemblyman Greg Hafen doing a viral dance dedicated to bipartisanship had upward of 179,000 views.

Torres, 25, says her motivation for starting with TikTok came from the high school students she teaches at Mater Academy in East Las Vegas. After the riot in the U.S. Capitol on Jan. 6, when she asked if they had seen the news, they said they heard about it on TikTok.

“I could see that, in reality, TikTok is the form of information for this generation of high schoolers and also for college students,” she said in a Spanish interview with The Nevada Independent En Español. “Why don’t we use TikTok to inform the community how the Legislature works?

Torres’ videos do everything from highlighting where to sign up for a COVID vaccine to guiding viewers on how to participate in committee hearings and — an Indy fan favorite — spoofing “The Bachelorette.” And her colleagues are beginning to follow suit — Assembly Speaker Jason Frierson and Assemblyman Steve Yeager have also joined the platform.

Even Hafen, the youngest Republican in the Legislature, is getting some residual fame.

“It’s kind of surprising. I was like, ‘Oh. Wow. Cool,’” Hafen said. “I’m still trying to figure out what TikTok exactly is, so when I figure it out, I’ll let you know.”

In 2019, the Nevada State Board on Geographic Names renamed a mountain peak in the Great Basin National Park christened after Confederate President Jefferson Davis to Doso Doyabi, meaning “white peak” in Shoshone.

Native voices could be given more prominence in such decisions if the Legislature approves AB72, which would add a Nevada Indian Commission member to the state geographic names board. The Assembly Committee on Natural Resources held a hearing for the bill last week.

“This is designed to provide more opportunities for our Native citizens to be able to participate in this important name process,” said Cynthia Laframboise, state archives manager at the Nevada State Library.

The bill would add yet another seat at the table for tribal citizens as the board already includes the Inter-Tribal Council of Nevada, which includes representatives from all 27 tribes.

Laframboise said that the board is seeking the additional representation because it has not always been successful in getting feedback from tribal members, and pointed to a gap in access to technology.

“I do appreciate the efforts, especially considering that many of these places had names before other communities came in and ‘officially’ named them,” said Assemblyman Howard Watts (D-Las Vegas), who is also the committee chairman.

Assemblyman Jim Wheeler (R-Minden) raised a concern that an even number of members on the board could lead to split votes, and asked how such a situation would be resolved.

“I've been on the board for nine years, and we've never had a situation where we've even had anyone disagree with the name. It's always been unanimous,” Laframboise said.

One supporter called in to remind the committee that Nevada was originally the territory of the Paiute, Shoshone and Washoe.

“Many historical names used by the tribal people were replaced by settler names, and having representation on this group will contribute to enriching Nevada’s history with accurate representation,” said Marla McDade Williams of the Reno-Sparks Indian Colony.

Bill hearings on a cannabis testing database, disclosure of election-related text messages, requiring children stay in car seats longer and a budget hearing for the state’s beleaguered Department of Employment, Training and Rehabilitation (DETR) are likely to draw much attention during the upcoming fifth week of the Legislature.

Below, we’ve listed out the hearing times and short descriptions for those high-profile measures. They’re accurate as of Sunday afternoon, but are subject to change at any time (given that the Legislature is exempted from Open Meeting Law.) For links and times to watch committee meetings, check out the Legislature’s website.

Here’s what to watch this week in the Legislature:

Tuesday, 1:30 p.m. - Assembly Growth and Infrastructure reviewing AB118, requiring older children to use car seats and sit in the back seat

Tuesday, 4 p.m. - Assembly Legislative Operations and Elections reviewing AB166, which requires the disclosure of who is paying for election-related text messages

Thursday, 8 a.m. - Assembly Judiciary reviewing AB141, which requires more notice for people before executing a no-cause eviction and would seal records of evictions carried out during pandemic

Our roundup of pending election-related bills. Making the AB4 vote-by-mail provisions permanent has gotten a lot of headlines, but Sen. Roberta Lange’s straight-ticket voting and legislative vacancy changes bill would also be a huge change.

Somehow the plan to build a 36,000-person “Painted Rock Smart City” on undeveloped desert land near a business park “is everything that the environment absolutely needs.” Michelle Rindels reports on Gov. Steve Sisolak and fellow state leaders’ Friday roundtable on Innovation Zones.

Details on the bill that would prevent driver license suspension for unpaid tickets, via Jannelle Calderon.

Marijuana consumption lounges, which seem like the last place you’d want to be in a pandemic, are coming back this session (Las Vegas Review-Journal).

Legislative leaders say the next phase of “limited reopening” of the Legislative Building could come in mid-April (Associated Press).

In an obvious move to throw red meat to his base, Republican Senate Leader James Settelmeyer wants to change the formula for how home care workers (who are paid a national median wage of $12 an hour) are compensated under Medicaid (Nevada Current).

‘Pharmacy deserts’ may be contributing to vaccine inequities in Nevada (Nevada Current).