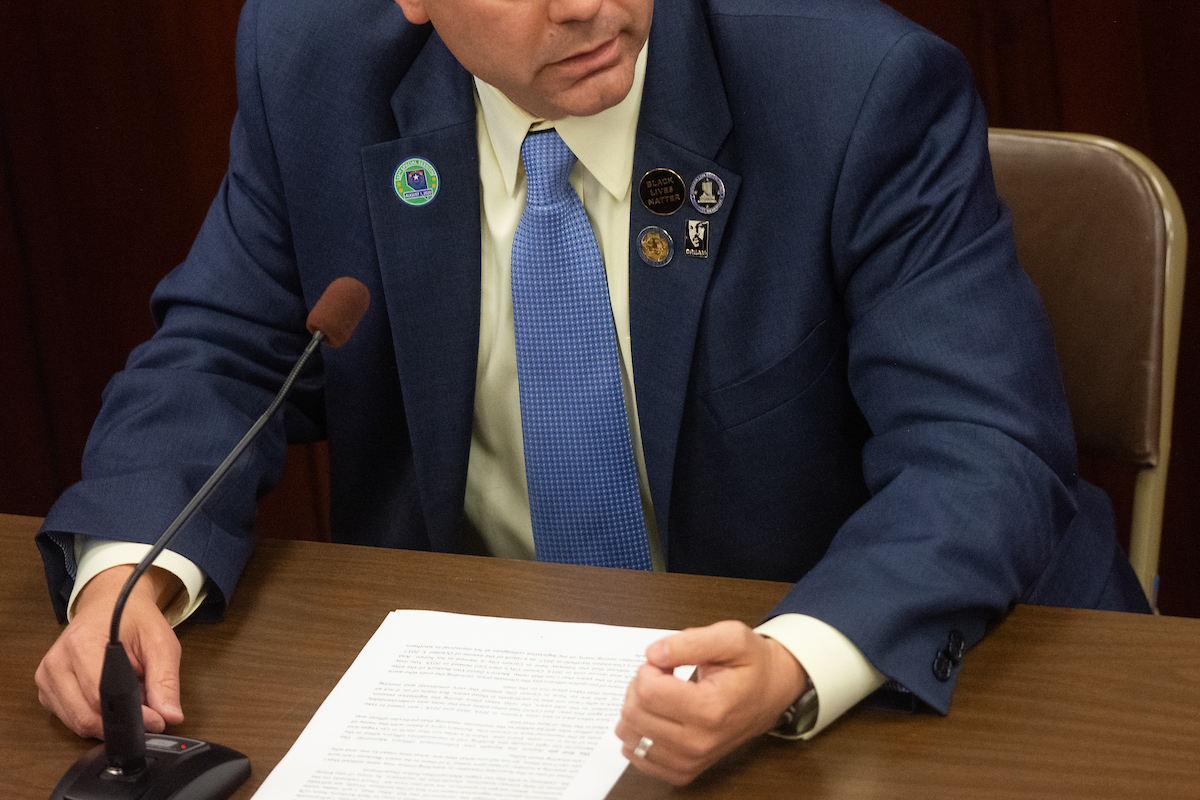 A bill that restricts police use of chokeholds, allows recording of law enforcement and calls for drug testing of officers involved in shootings passed the Assembly with bipartisan support, in spite of criticism that lawmakers could have gone further to address police brutality.

A few hours later, the Senate Committee of the Whole passed AB3 as well, meaning it next heads to a full Senate vote. Republican Sen. Ira Hansen opposed, saying the process felt rushed and is not related to COVID-19 or the budget so it shouldn’t be up for consideration.

“It simply does not belong in a special session,” he said.

Democratic Assemblyman Steve Yeager, who presented the bill, prefaced the legislation by describing four lapel pins on his suit jacket — one honoring police officers killed in the line of duty, one for his completion of a citizens police academy, one that says “Black Lives Matter” and a fourth that bears a silhouette of Dr. Martin Luther King, Jr.

“These four lapel pins and the values that they reflect — they’re not mutually exclusive,” he said, before turning to the proposed bill. “... Assembly Bill 3 in front of you is the embodiment of what we can do better in the state of Nevada because if we aren’t moving forward, we’re standing still, which means we are falling behind.”

The bill comes weeks after protests erupted nationwide following the police killing of George Floyd in Minnesota. Flody’s death sparked a resurgence of the Black Lives Matter movement in big cities and small towns across the country — and, with it, calls for police reform.

Gov. Steve Sisolak and other legislative leaders had pledged to address issues with systemic racism and policing during a press conference in early June, shortly after Floyd was killed and protests erupted around the state. The issue was not brought up in the initial, budget-focused special session this month, but was included in the proclamation for the current special session.

During the Saturday afternoon hearing, Ellison lamented what he described as “rumors” swirling about how the bill would defund police departments.

“I think it took away from what the bill really intended to do,” he said.

Yeager agreed about the spread of misinformation.

“I think the best PR that we can do is to encourage folks to read the bill,” Yeager said. “Fortunately, this one is not too long.”

While it may not be long, the 10-page bill would enact a variety of reforms. For instance, the measure explicitly allows recording of law enforcement activity if it is not obstructing the activity and bars police from seizing recording instruments or destroying recorded images.

It provides that police can use “only the amount of reasonable force necessary” to carry out the arrest of someone who is fleeing or resisting. The law currently allows police to use “all necessary means” to make the arrest.

Asked about how “reasonable” is defined, Las Vegas police lobbyist Chuck Callaway said case law dating to the 1980s guides that definition. He noted that no officer he’s talked with believes that police actions taken against George Floyd were reasonable.

In 2019, Callaway said, there were 1.5 million calls for service where officers made contact with people, and there were 900 reported uses of force, including lower-level complaints such as people saying handcuffs were put on too roughly. He said that was a small fraction of 1 percent of incidents.

The bill also bans officers from choking people and says officers “shall take any actions necessary to place such a person in a recovery position if he or she appears to be in distress or indicates that he or she cannot breathe.” But Yeager noted that chokeholds could still happen if they were in self-defense against deadly force.

Callaway and legislative legal counsel said it would not preclude a physical struggle to get someone under arrest, but the chokehold prohibition applies once someone is in custody. “Lateral vascular neck restraints” were used 21 times in 2019, Callaway said, but the agency this summer changed its use of force policy to limit the technique only to when an officer’s life is being threatened.

He said the agency supports the bill. The Nevada Police Union, which represents state-employed police officers, also supported it.

Additionally, the measure creates a “duty to intervene” that requires an officer to prevent or stop another officer from using unjustified force against a person, regardless of the chain of command. The officer must report in writing within 10 days the details of the incident.

The bill also requires testing officers for alcohol and drugs — including prescription drugs and cannabis — if they are involved in a shooting or a situation that led to substantial bodily harm or death of another person.

Callaway said under current practice, supervisors are subject to drug and alcohol testing if they are involved in a deadly force situation, but the bill would extend the testing to rank-and-file officers. He said he expected the results would be initially confidential but might later be made public if there was a criminal investigation, through civil litigation or — after the investigation is finished — through a public records request.

Legislators heard an hour of public testimony in support of the bill, although many callers indicated it’s only a starting point.

“This is really the bare minimum of change that needs to occur in order to foster accountability when people needlessly die at the hands of law enforcement,” said Holly Welborn, policy director at the ACLU of Nevada.

Assemblyman Tom Roberts, a Republican and former assistant sheriff with the Las Vegas Metropolitan Police Department, stood in support of the bill despite calling it a personal struggle.

“With this bill, it’s not perfect,” he said. “It doesn’t hit every bell and whistle … I think it will actually improve community trust and make our organizations adopt some best practices that are utilized in our state already.”

Police officers who testified against the bill said the measure would handcuff them and is part of an effort to paint officers with a broad brush because of what happened to Floyd.

Scott Nicolas, vice president of the Las Vegas Police Protective Association, testified in opposition, saying there was “no compelling need to make drastic policy changes” at this time.

“What we should be focused on is educating the public on dangers of resisting arrest and why compliance during a lawful detention or arrest is so important,” he said.