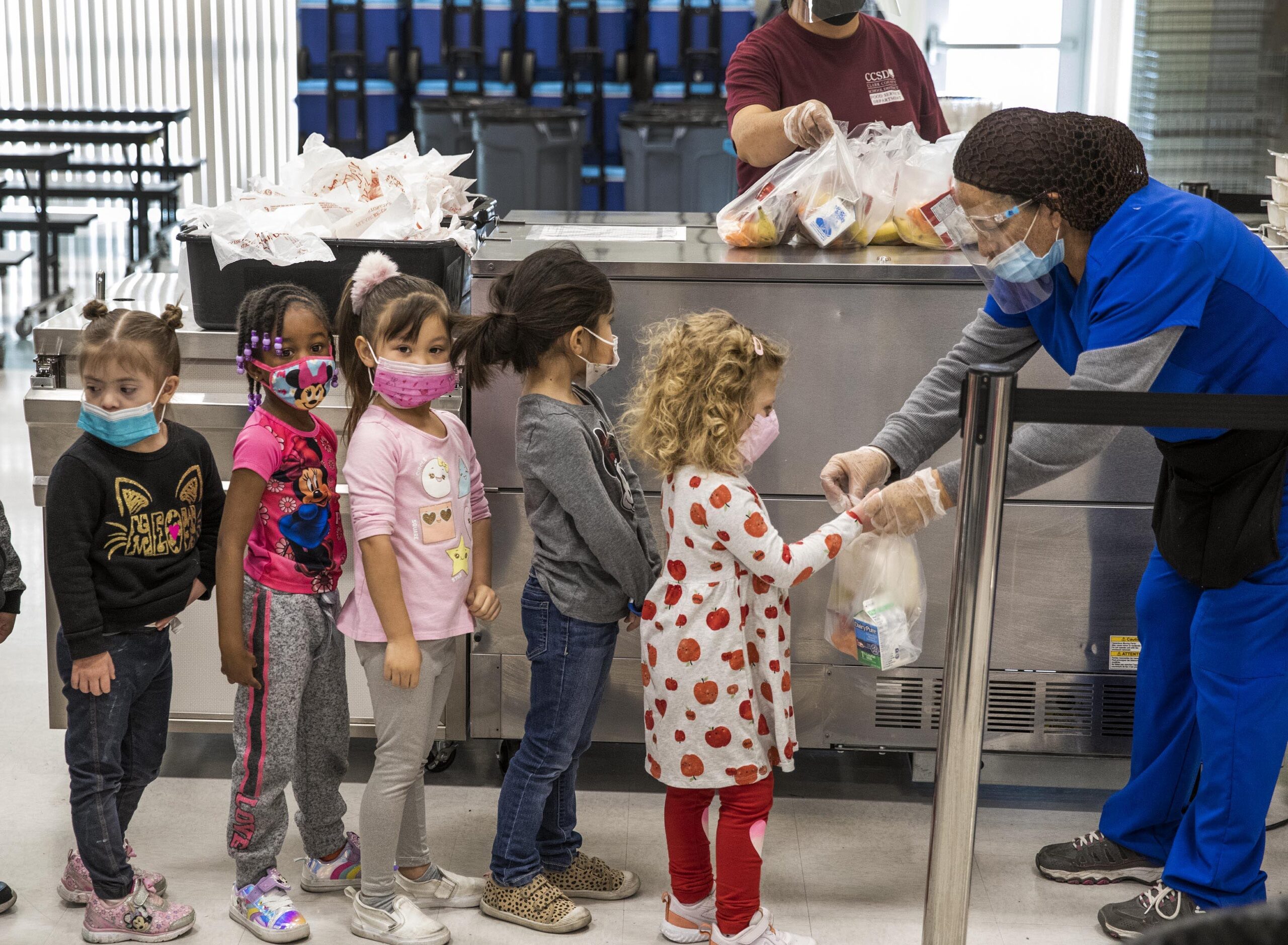 An interim legislative committee approved more than $75 million in federal aid money for universal free meals in Nevada’s K-12 schools on Tuesday, the latest in a raft of funding approvals disbursed from the nearly $7 billion sent to Nevada through the federal American Rescue Plan (ARP) last year.

The roughly $171 million in funding approved by the state’s Interim Finance Committee (IFC) Tuesday stems from the state general aid portion of the ARP, and also includes $20 million for crisis stabilization centers, or dedicated facilities meant to address mental health crises without the need for either hospitalization or police involvement. Lawmakers also allocated funding from other portions of the ARP dollars.

The move fulfills a promise Gov. Steve Sisolak made in April to direct money to mental health initiatives, and follows a trend of his spending recommendations subsequently being approved by the IFC. Tuesday’s meeting was the second time the committee has met to approve ARP funding recommendations, with the first such meeting also happening in April.

Along with the approval of funding for free school lunches and crisis stabilization centers, lawmakers unanimously approved $200 million to provide competitive grants to augment school programs aimed at addressing learning gaps caused by the pandemic; $10 million for emergency behavioral health funding; and $16 million slated for additional hiring at the Department of Employment, Training and Rehabilitation (DETR) meant to help clear a remaining backlog of unemployment claims.

The money earmarked for crisis stabilization centers also follows another $1 million federal investment in a three-digit mental health hotline, 988, meant to provide an alternative to calling 911 in mental health emergencies.

Accounting for all the approved expenditures, the state still has $1.1 billion remaining in unobligated general ARP funds — about 41 percent of the state’s original share — to allocate for specific use by the end of 2024. Funds must be fully spent by the end of 2026.

Disbursements approved Tuesday largely centered on the rapidly increasing cost of living in Nevada that has placed an outsized financial pressure on low-income families — with lawmakers focused on maximizing the long-term effects of the funding while balancing the needs of families facing increasing gas prices, housing costs and other financial stressors.

In political terms, leading Democrats — including Sisolak and lawmakers — have cast the approvals as critical economic relief, with Sisolak calling the money “a big step forward for Nevada families” in a statement released after Tuesday’s meeting.

The disbursements — though just the latest in a long string of allocations from the record amount of federal aid provided through the ARP — come in the midst of an election year in which rocky economic conditions are expected to work against incumbent Democrats.

A few Republican lawmakers hesitated on funding free lunches for children who may not need them.

Though Assemblywoman Heidi Kasama (R-Las Vegas) said she believes in free lunches for all, she balked at the high costs, use of ARP funding for parents who can afford lunches and the potential for the funds to supplant funding provided by the Department of Agriculture if parents forget to fill out the proper paperwork for free and reduced-price lunch.

“We are hoping with the best intentions that all of the forms are going to be filled out so we get reimbursed from the Department of Agriculture,” Kasama said. “We know many times best intentions don't always work.”

Nevada Department of Agriculture Director Jennifer Ott noted that in response to the pandemic, students received free lunches and breakfasts at school and the funding would provide some stability for children. She added that just because a family is not eligible for free and reduced-price lunch does not mean they are not food insecure.

“[The funding] allows the Department of Agriculture to offer one more school year of free school meals to the children in Nevada,” Ott said. “Allowing them, especially in these uncertain times, to have a little bit of certainty on nutrition and food in their lives.”

Assemblywoman Maggie Carlton (D-Las Vegas) said with over a billion dollars left to spend, lawmakers should not have to think twice about ensuring students have access to food.

“Spending money on feeding kids breakfast and lunch in school, so we don't discriminate between the haves and have-nots at the school … is well worth spending,” Carlton said. “I know there are other issues in the state, but I think feeding kids should be one of our top priorities.”

Ultimately, every committee member except Kasama voted to approve the funding allocation.

Even as the committee unanimously sanctioned $200 million in grant funding for K-12 school districts looking to address pandemic-related learning loss, some legislators questioned whether the state Department of Education would be able to guarantee the money would go where it was intended.

State Superintendent Jhone Ebert told the committee that the ARP money would be distributed by school district according to existing competitive grant guidelines, which require both an application process and ultimately a reimbursement and “augmentation” of programs already created to deal with pandemic-caused learning loss.

Those programs include a range of changes made by school districts over the last two years, from increasing the length of the school day to devoting additional resources to tutoring programs.

But Carlton pressed Ebert and education officials multiple times, asking whether school districts would be able to secure grant money for money already spent, then — through creative accounting — funnel the federal funds to other areas.

Ebert said that any federal money sent to school districts must first be approved — or disapproved — by the state education department, and that only then are funds reimbursed for approved programs.

Carlton did not appear satisfied with the response, telling Ebert that “we know that there are school districts out there planning on using these dollars for multiple different things, so I just want to make sure that the dollars are supposed to go to learning loss.”