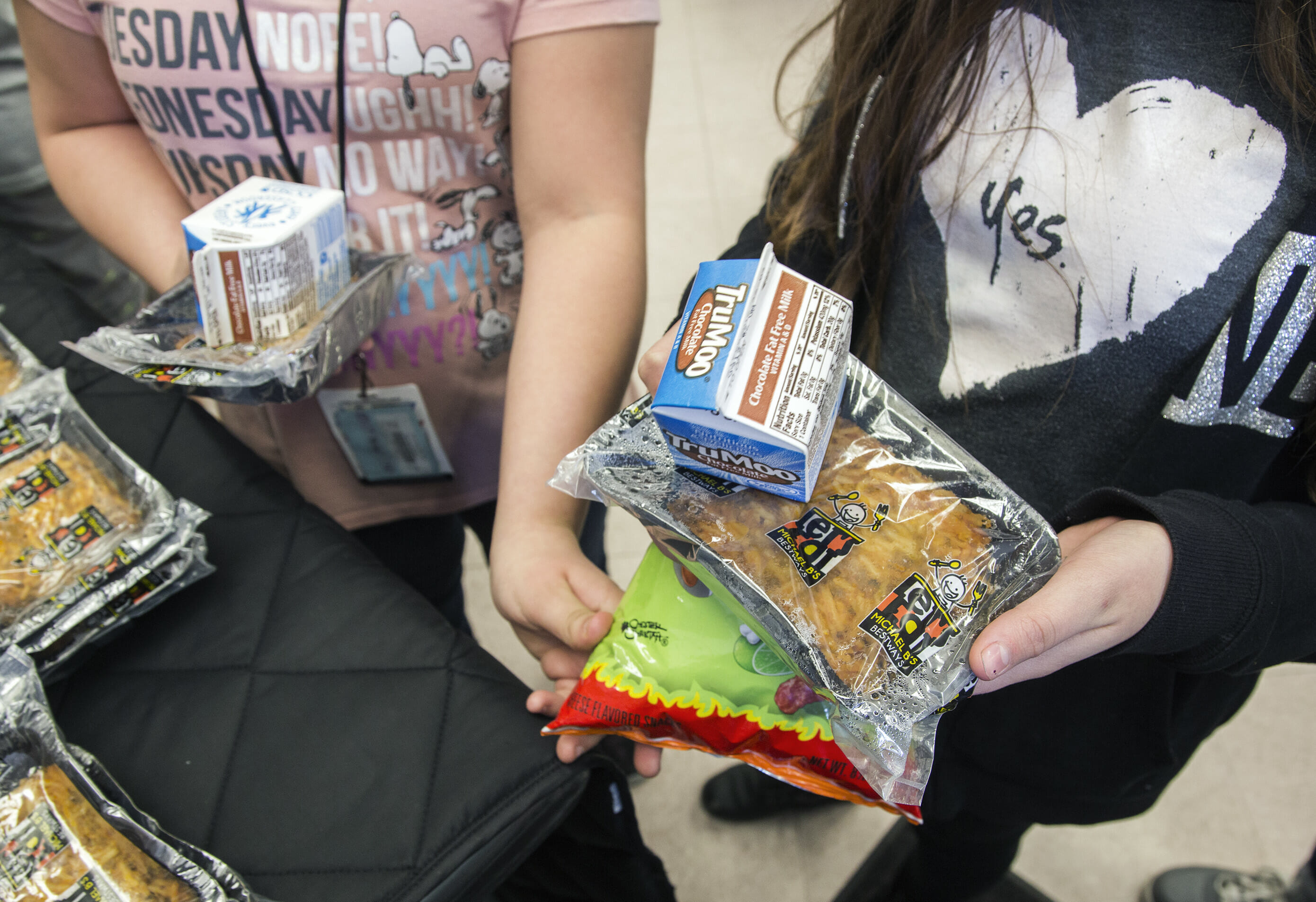 Nevadans enrolled in public K-12 schools will receive free meals next school year, under the U.S. Department of Agriculture’s decision this spring to continue universal meal waivers across the country.

For Washoe County School District and others, the federal support means full bellies and full coffers.

“We went from looking like we were going to go broke to actually having a pretty healthy surplus of funding,” said Pete Etchart, the district’s chief operating officer.

Instead of charging students, schools will tally the number of meals they serve. That number will go to the Nevada Department of Agriculture and be reimbursed with federal dollars — $2.24 per breakfast, $3.91 per lunch and $0.98 per snack recorded.

U.S. Agriculture Secretary Tom Vilsack touted these among the benefits of the extension during a recent visit to Southern Nevada, where he promoted the federal American Families Plan that would make free meals permanent.

But the transition to free meals for all could have unintended consequences.

“The issue has been that the free-and-reduced lunch data we collect… is also used for a lot of other things, including grants and Title I and all these different other funding sources for the school districts,” Etchart said.

Some officials worry that skewed data could undercount the most vulnerable students. If the gaps in data aren’t properly filled, it might mean less funding where it’s needed the most.

The Washoe County School District serves about 60,000 students across more than 100 schools. Anywhere from 40 percent to 43 percent of them qualified for free-and-reduced lunch in the 2020-2021 school year, said Mike Supple, the district’s assistant director of nutrition services.

Washoe County, like many school districts, uses free-and-reduced lunch percentages to determine which schools qualify for a number of grant programs. If its schools are missing data, some might undershoot the threshold needed to secure funds such as Title I, a federal grant program that provides dollars for schools with high numbers of students living in low-income households.

“If parents know their students are eating for free, do they really need to fill out their free-and-reduced lunch form, which is what gives us our data?” asked Brian Prewett, Title I director at Washoe County School District.

“With our aggregate data we have published annually, we have not seen a big reduction in free and reduced lunch meal certification,” Dibble said.

He said the state is turning to direct certification, which automatically qualifies families who are on Supplemental Assistance Nutrition Program (SNAP), Medicaid and similar assistance programs.

Direct certification has already been used to qualify 40 of Washoe County’s schools and more than 260 of Clark County’s schools for the Community Eligibility Provision (CEP). Preceding the federal extension, the program has provided free meals to all students at schools with large percentages from low-income households. Clark County officials said they were not as concerned with missing free-and-reduced data, because it already operates CEP at a large scale.

Vilsack also pointed to direct certification as the solution and promoted other advantages of universal free meals during his visit.

“The data that we will get from [universal free meals], which offsets that concern, is the data of better health outcomes for students and better productivity,” Vilsack said.

But Etchart said the Nevada Department of Agriculture previously wanted districts such as his to collect free-and-reduced data regardless of next school year’s universal free meal extension, in case the change was not made permanent. He added that it’s unclear why free-and-reduced meal applications were collected in the first place if direct certification can fully capture that data on low-income families.

“I’ve been here eight years,” Etchart said. “I’ve always felt like we should be providing meals to students just like we provide textbooks to students.”

An extension of the Pandemic Electronic Transfer Benefits (P-EBT), part of the federal American Rescue Plan, means families with students eligible for free-and-reduced meals are among those due food assistance money from the prior school year.

Steve Fisher — administrator of the state’s Department of Health and Human Services Division of Welfare and Supportive Services — said an estimated $523 million will be going to 395,000 qualifying low-income public school students. That’s because many didn’t get school meals when they learned under hybrid or fully remote models last school year.

The latest extension widened eligibility to include families with children under age 6. However, Nevada’s distribution schedule isn’t set to begin until September, even though benefits have started to hit families' pockets in states such as Washington and Colorado.

Fisher said more complex eligibility standards meant the state had to take more time to contract with Deloitte, a consulting firm, that helped them make those changes.

“[Washington] already had a contract in place with a vendor who maintains their system,” Fisher said, “so they could just immediately jump on it and have those changes made to their system to then issue those benefits sooner than later.”

Families should see $6.82 for each day of in-person learning their children missed. Credits from the 2020-2021 school year will be issued on EBT cards in a staggered rollout, which Fisher said is by design.

“Boy, could you imagine if they issued one massive benefit to every household out there?” Fisher said. “The shelves would be empty at the grocery stores, because everybody would go in and spend all their EBT benefits.”

Money from August to November of last school year will go out Sept. 14-23. December to February dollars will be issued Oct.14-23. And March to June money will hit families’ pockets Nov. 14-23.

A final round for the 2021 summer will go out starting on a to-be-determined date in December.

Cards work at most grocery stores and are only eligible for food purchases; they won’t work on products including tobacco, alcohol and restaurant food sold for immediate consumption.