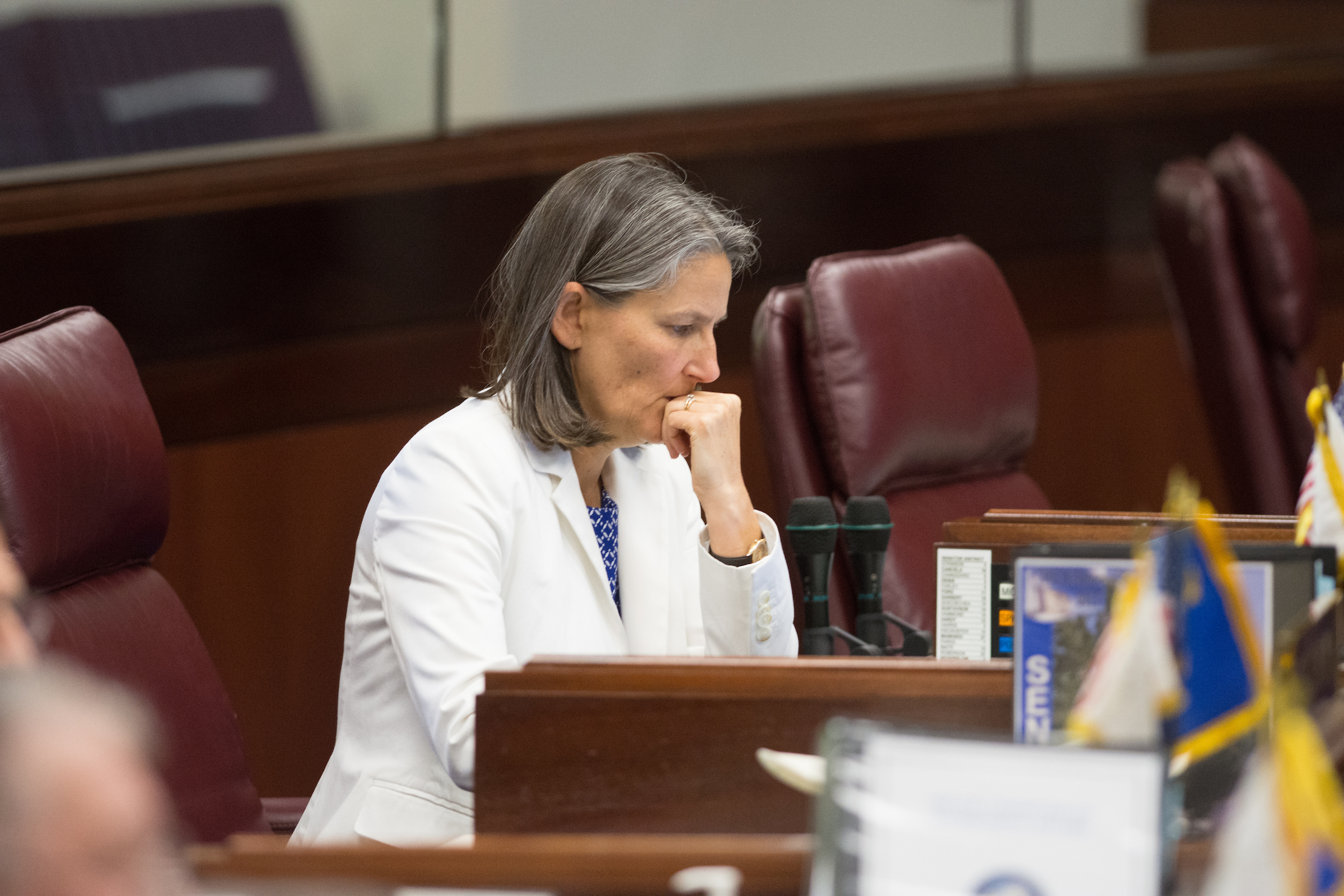 Long before she was a Sparks city councilwoman or a state senator, Julia Ratti was a cancer patient.

She was in her late twenties and working as the executive director of a small nonprofit when the doctors found cancerous tumors on her vocal cords. She spent 17 years and nine surgeries fighting back the tumors. Just when it had been a couple of years and the doctors thought they were gone, the tumors would show up again.

“I never was able to get to a period where I had been in remission for multiple years,” Ratti told lawmakers on the Senate Health and Human Services Committee on Wednesday. “Seven or eight surgeries, you can see I may not be the ideal candidate for an insurance policy.”

Ratti said that when she decided to leave the nonprofit and start her own consulting firm, one of the board members who worked in the insurance industry gave her a critical piece of advice: “Do not ever let your insurance policy lapse. If you do, there’s a good chance that you will no longer be insurable.”

Because she had no coverage gaps, she was able to purchase an individual policy that would cover her pre-existing condition, but it came at a price. Ratti estimates her policy cost her more than $1,200 a month at that time.

“Without that board member who pulled aside an impetuous late 20-year-old who thought she was invincible to say, ‘Hey this is really important,’ I probably would have been one of those folks without insurance,” Ratti said. “This is not the world we want to return to.”

Her remarks came amid a presentation to fellow lawmakers of a bill, SB235, that would codify the Affordable Care Act’s protections for pre-existing conditions into state law, and the world Ratti was referring to is the one that existed prior to 2010 — before Congress passed the landmark health-care law.

Despite the controversy over other provisions of the health-care law, including its individual mandate to purchase health insurance, pre-existing conditions are by far the most popular portion of the ACA on both sides of the aisle. Seventy-three percent of respondents said that it is either “extremely important” or “very important” that Congress ensure that the ACA’s protections for pre-existing conditions continue in a January poll from the nonprofit Kaiser Family Foundation.

But those protections are in jeopardy pending the outcome of a federal court case challenging the Affordable Care Act. A District Court judge in Texas deemed the entire health-care law — including its pre-existing condition protections — unconstitutional in December, though the case is now up on appeal and is expected to wind its way to the U.S. Supreme Court.

Ratti assured fellow lawmakers on the Senate Health and Human Services Committee, which sponsored the bill and of which she is chair, that the legislation “does no more than but does at least what is in the Affordable Care Act” as it relates to pre-existing conditions — a backstop in the event that the protections are removed from federal law by the courts.

“I believe deeply that if we should unfortunately lose the coverage that we currently have at the national level making sure these protections are in place, we need to make sure in Nevada we won’t discriminate against anyone based on their health status,” Ratti said.

A handful of patients, many of them with multiple sclerosis, testified before lawmakers that the ACA’s pre-existing protections make it financially possible for them to live with their conditions and still remain productive members of society. Vivian Leal, a patient and volunteer advocate with the MS society, told committee members that the billable price of her medication is $65,000 a year, plus the cost of the infusion procedure.

“Do the math. The ACA freed us from all of that. So does this bill,” Leal said. “This bill would insulate Nevada from the unpredictability at the courts and the mayhem of DC. I cannot go back. Nevada cannot go back.”

A wide array of health-care groups — including the Nevada Association of Health Plans, the Nevada State Medical Association, the Nevada Primary Care Association and the Nevada Public Health Association — testified in favor of the legislation. They were joined in their support by several other advocacy organizations as well, including the Progressive Leadership Alliance of Nevada, Battle Born Progress, the Children’s Advocacy Alliance and the Transgender Allies Group.

No one testified in neutral or in opposition to the legislation.

Though Republican state Sen. Joe Hardy, a physician by trade, asked some probing questions about the scope of the legislation, lawmakers on both sides of the aisle are likely to support the legislation. Assembly Republican Leader Jim Wheeler told The Nevada Independent earlier this year that “all Republicans that I know want health insurance to cover pre-existing conditions.”

During his campaign, Gov. Steve Sisolak also promised to make protecting patients with pre-existing conditions a key focus of his tenure. Nevada, at the direction of Sisolak and Attorney General Aaron Ford, filed a motion in late January asking to intervene in defense of the Affordable Care Act in the lawsuit against it.

Ratti acknowledged that the legislation is “relatively narrow in scope,” only codifying the portion of the Affordable Care Act dealing with protections for pre-existing conditions. But she said that “at a minimum if we lose the Affordable Care Act, we can’t go back to the place where having a pre-existing condition means you can no longer access health care.”

And, for the record, Ratti added that she has had multiple years in remission.

“I felt that was important to close that gap,” Ratti said, “just in case anybody out there was wondering.”