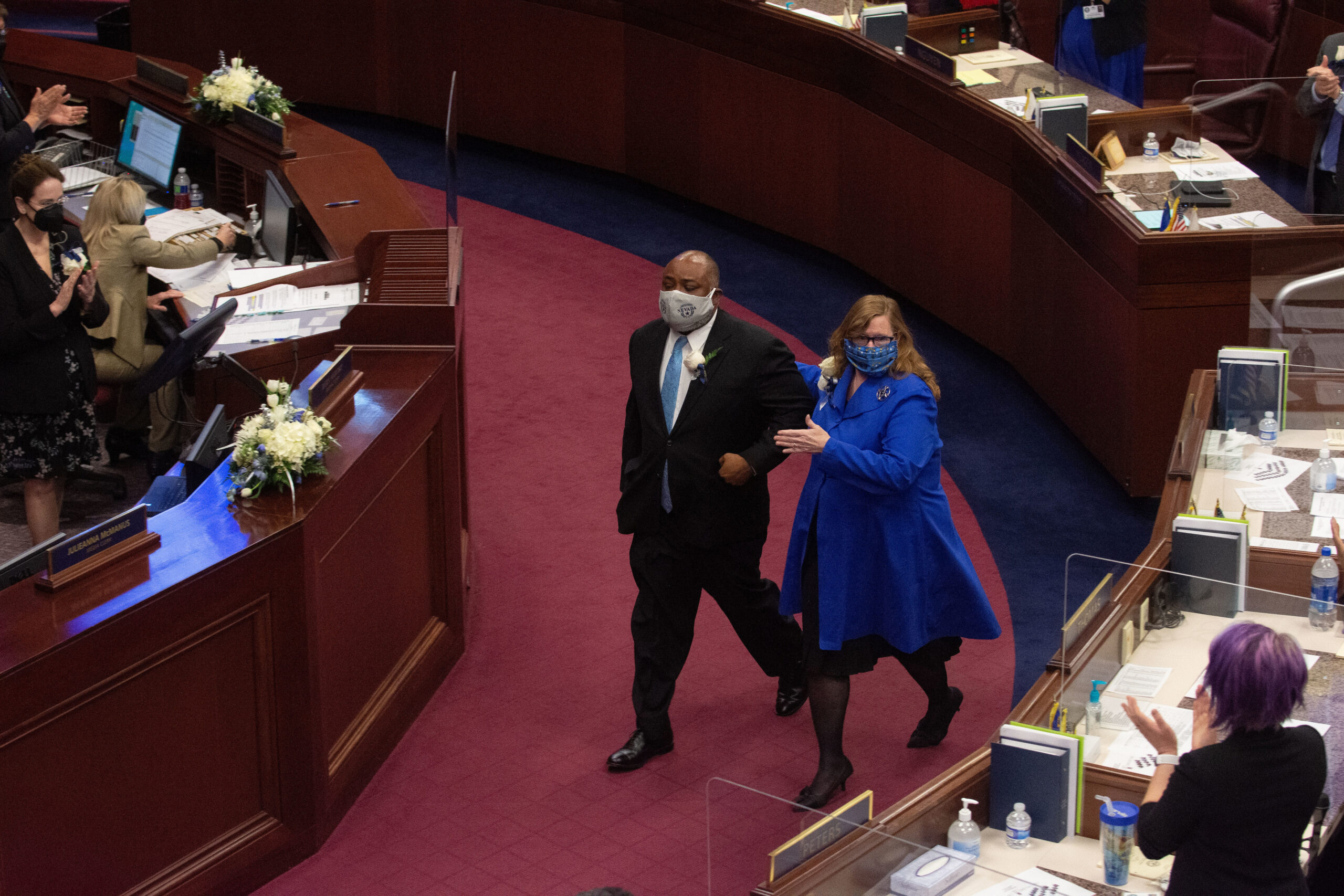 State lawmakers are adding more than a half a billion dollars in education funding to help stand up the new K-12 funding formula over the next two years, marking one of the largest legislative investments in school funding without a tax increase in state history.

Legislators in a joint budget committee on Wednesday unanimously approved allocating $275 million in the 2022 fiscal year and $227 million in 2023 fiscal year to boost base funding in the state’s new “Pupil-Centered Funding Plan,” the long anticipated upgrade of the state’s decades-old public school funding formula set to go into effect this summer.

But the meeting Wednesday morning was the first time that education advocates and the public got an answer to the question of how much lawmakers would be willing to spend to stand up the new formula — more than $502 million.

“I'm going to say it: I've been waiting a damn long time to put this amount of money into education,” Assembly Ways and Means Chair Maggie Carlton (D-Las Vegas) said.

Sen. Chris Brooks, who co-chairs the committee, said a lot of work happened overnight to get the additional funding and numbers squared away. The financial flexibility to move forward on enhanced funding was undoubtedly also boosted by the better-than-expected taxation revenue projections approved earlier this month by the state’s Economic Forum — giving lawmakers a $586 million upward revision in projected tax revenue, much of which is now being allocated to the funding formula.

Though lawmakers are ending the 120-day legislative session with the financial wind at their backs — between the Economic Forum’s projections and the coming $2.9 billion from the federal American Rescue Plan — several noted that the actions taken on Wednesday will apply more pressure on future Legislatures to continue funding education at higher levels.

“It will certainly put some upward pressure, rather than downward pressure, on future sessions and future executives to continue funding education at an increased method, and I think that's the point,” Sen. Ben Kieckhefer (R-Reno) said.

The average base per-pupil funding will be $9,096 in the 2022 fiscal year and $9,185 in the 2023 fiscal year. Those figures do not reflect other money that flows to students, including special education money that is outside the funding model.

Eight of the state’s 17 school districts, plus the Davidson Academy and all charter schools, will be transitioned to the new funding formula over the biennium, with nine mostly rural school districts remaining in a “hold harmless” budget status. Legislative fiscal staff said that the new K-12 funding scheme covers about 93.6 percent of public and charter students.

“I don't think we can express our appreciation more than we already have, but we are going to continue to try,” said Hawah Ahmad, a lobbyist for the Clark County Education Association. “And at the end of the day, we just thank you for supporting our educators and supporting our students to give them every opportunity to succeed.

Chris Daly with the Nevada State Education Association lauded the move but acknowledged the public pressure to continually move the needle on K-12 funding in the coming years. The Commission on School Funding — the advisory body ushering the new funding plan into existence — has said Nevada needs more than $2 billion over a decade to achieve the national average of per-pupil spending. The commission has recommended changes to property and sales taxes as a means to generating that significant amount of new revenue toward education.

Carlton, who is serving her final term in the Legislature, said she anticipated additional criticism of the Legislature to come over the final two weeks of session but stressed that putting a substantial amount of money into base education funding would have a profound effect on public school teachers and students.

“No matter what we do, it's not going to be good enough for somebody,” she said. “They're going to criticize us for not solving this problem or that problem or another problem. But the fact of the matter is that we are adding a half a billion dollars to education, and we're putting most of it into the base, which will help every single student and every single teacher succeed.”

It wasn’t immediately clear how much the new infusion of funds would raise the amount of money Nevada spends overall on education per student. Teacher union activists have worn buttons around the Legislature with the number “48,” referring to how the state’s approximately $9,400 in spending per pupil per year ranks 48th in the nation.

“I am confident it is certainly higher in both regards — both the state money that's going into education per pupil as well as the overall investment in education from the state outside of the funding formula,” Frierson said. “I'm confident it’s certainly more than we did in 2019, which was a record increase ... So we're continuing to make progress towards funding, prioritizing public education and we'll continue to do so.”

Because the additional funds are layered on top of a budget that already had deep cuts to class size reduction, the “Read by Grade 3” program and other initiatives, some of the money is simply digging the state out of a hole.

Kieckhefer acknowledged “it's not going to make a huge dent” in how the state ranks nationally, but also said that he thinks the metric is “a really blunt instrument to try and figure out how our education system is functioning.”

“I've always thought that we did ourselves a disservice by saying we're 48 or whatever we are in education, because I've got four kids in the public school system and I know that there's really good teaching going on,” he said. “Is this just massive growth in our education spending? No, it's not. But it is a commitment to seeing through the promise we made last session by the implementation of the Pupil-Centered Funding Plan. And it's ensuring that the majority of kids in the state … are being funded based on some reflection of their need. And I think that's important.”

Beyond the education add-backs on Wednesday, the state has to account for a hit of about $200 million because the Supreme Court ruled a payroll tax increase was unconstitutional, and has already increased Medicaid general fund spending about $110 million above the governor’s recommendation. That consumes much of the $910 million in unexpected money the state has to work with because revenue forecasts were rosier than originally planned.

That could mean the budget does not have a 5 percent cushion in the “ending fund balance,” which is a target for lawmakers. Kieckhefer said he expects the Legislature will want to plug COVID-19 relief dollars from the American Rescue Plan to further shore up the budget.

Carlton said that the state isn’t yet done with the budget.

“We're just working with general fund right now because we don't have that money yet,” Carlton said of the federal aid. “Now once we get a very solid feel for what that is, then we can go ahead and add it in and then we can make some other decisions."

She said she’s waiting for fiscal analyst Russell Guindon to get comfortable with guidance from federal officials on precisely how the money can be used.

“We're comfortable with getting the money but is the guidance clear enough that we don't put ourselves in harm's way and we end up with a clawback?” Carlton said.

But it appears the amount of base per-pupil funding finalized on Wednesday will stand.

“I think we are where we need to be with the base. You have to remember it's going to grow over time. The whole goal was to give it a really good sound footing, so that it can grow over time,” Carlton said. “If you start too high … you'll have expectations that you may not be able to meet. This base, we believe, is just at the right level to allow the model to stand up and run on its own ... and then the legislators that come back in [2023] will be able to evaluate it.”