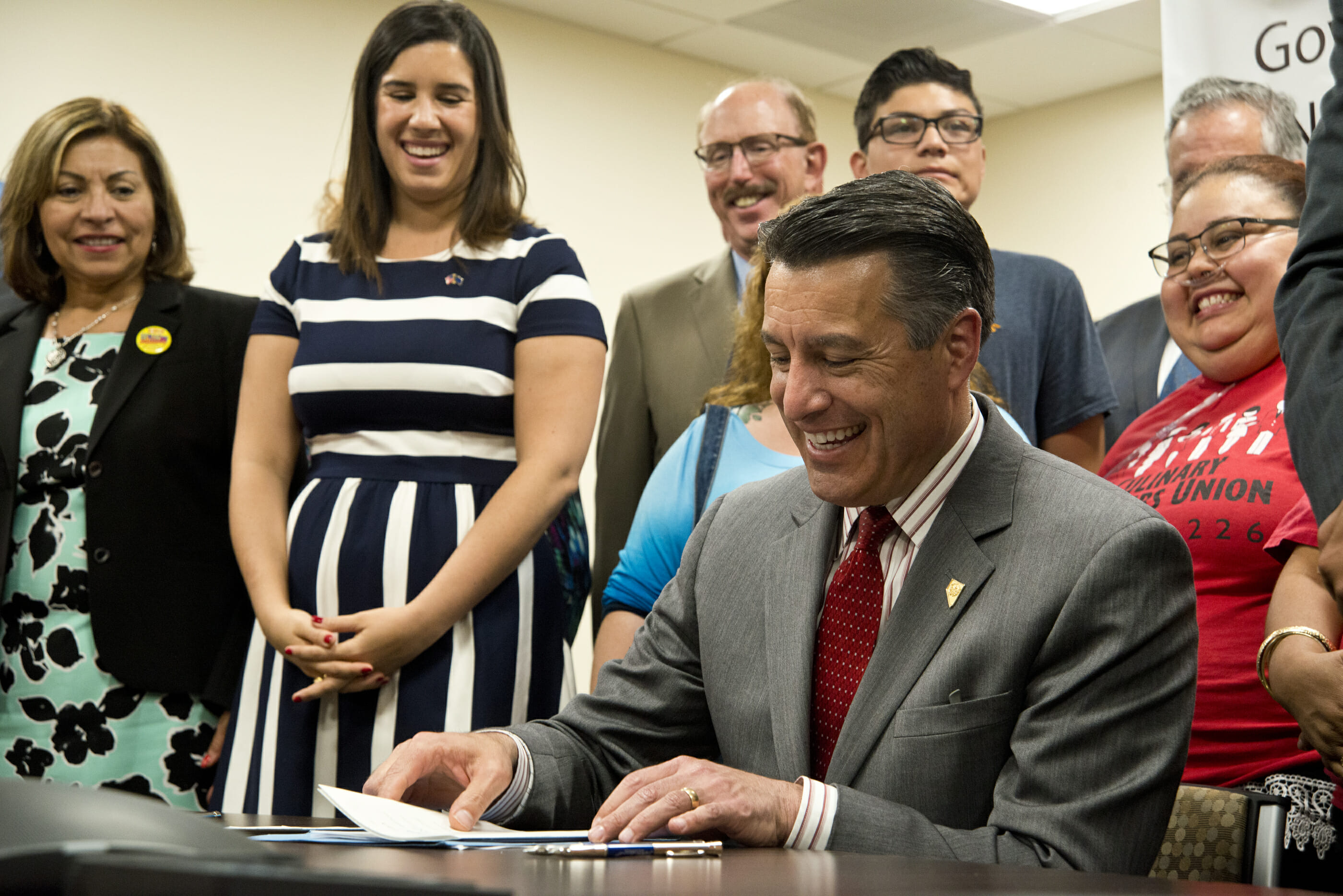 Republican Gov. Brian Sandoval swung through Las Vegas today to sign a number of key pieces of legislation, from a bill mandating transparency on diabetes drug prices to a measure to bring back the rooftop solar industry.

Sandoval signed three energy-related bills at a Tesla energy warehouse in southwest Las Vegas before attending an opening of the Culinary Health Center, where he signed two health care related bills backed by former Culinary political director and Democratic Sen. Yvanna Cancela. Later in the afternoon, he signed three more higher education bills at UNLV, including one appropriating money to plan a UNLV engineering building and additional money for the medical school.

He also greenlighted SB555, a bill that expands the Opportunity Scholarships program by $20 million over the biennium. The program, backed by business donations made in exchange for  tax credits, pays private school tuition for low- and middle-income children and was part of a bipartisan compromise adopted in lieu of the more controversial Education Savings Accounts.

The governor still has one more day to sign or veto bills otherwise they automatically become law at midnight on Friday. For a look at the bills he has signed and vetoed, as well as those still on his desk, click here.

Here’s a recap of the bills Sandoval signed in Southern Nevada on Thursday:

The signing culminated months of work spearheaded by Cancela to place transparency mandates on insulin manufacturers into law. The final bill Sandoval signed into law was an amalgam of Cancela’s original bill (SB265), which Sandoval vetoed earlier this month and a piece of legislation sponsored by Republican Sen. Michael Roberson (SB539) focusing on the role of PBMs play negotiating between manufacturers and insurance companies to set drug prices.

“I would be remiss if I didn’t recognize just how important this bill is not only for Nevada but across the country,” Cancela said at the bill signing. “Governor Sandoval has shown from the beginning of his time in office that he puts Nevadans first, and he’s done that in a number of arenas but especially in health care and for a number of examples of why that’s true today, this adds to that list.”

Her glowing comments about Sandoval stand in stark contrast to a statement she issued after he vetoed SB265, in which she said she was “deeply disappointed” in the governor.

“Nevada had the potential to lead the nation in taking on high drug costs, and tonight we have lost that opportunity. I know patients deserve better and so do all those who voted for and supported this bill,” she said in the statement.

The main provisions of the bill require manufacturers of diabetes drugs, such as insulin, whose drug prices have increased by more than a prescribed amount over the previous year report the costs of producing and marketing the drug, as well as any rebates they offer, and also mandates PBMs submit a report to the state including the total amount of all rebates that PBMs negotiated with diabetes drug manufacturers in the preceding calendar year and the amount of rebates retained by PBMs.

Other provisions of the bill require pharmaceutical sales representatives to annually report details of interactions with doctors, including who they visited and what samples or gifts they handed out, specifies that PBMs act in insurers’ best interests and bars PBMs, insurers and other third parties from placing gag orders on pharmacists preventing them from discussing lower-cost alternatives with patients.

In his veto message, Sandoval expressed concern that Cancela’s original bill only mandated transparency from manufacturers and not from PBMs.

“Complete transparency would shed light on every stage in the prescription drug supply process, and require all participants to share the same disclosure responsibility,” Sandoval wrote. “The selective and narrow approach reflected in this bill is unlikely to achieve sound public policy solutions for patients in Nevada.”

During the bill signing, Sandoval revealed a personal tie to the legislation he hadn’t previously discussed publicly — his grandfather suffered from diabetes.

“It is personal. This was my mom’s dad, and he’s somebody that I saw suffer because of that and he passed away several years ago,” Sandoval told reporters Thursday. “It’s something I typically don’t talk about — personal things — but it kind of just welled up in me as I was here today. So this was an important bill for me personally but also statewide.”

At a last-minute hearing on the bill on the Assembly floor in the waning days of the session, a pharmaceutical industry representative said passing the bill would cost the state a significant amount of money in legal challenges. But Sandoval says he thinks the new version of the bill lessens the possibility of a successful court action.

“Part of this new bill makes the legislation or the law less susceptible to a legal attack. Every bill is subject to legal attack, so that’s always a concern but in terms of as I looked at the pieces of the bill, we get threats of legal attacks all the time,” Sandoval said. “Again I thought it was important at least as a former judge and a former attorney general, somebody that can analyze those types of things and mitigate a susceptibility to a legal challenge, I think it was important to do that.”

One portion of Cancela’s SB265 that didn’t migrate over to SB539 was a section of the bill requiring manufacturers to notify the state 90 days ahead of certain planned price increases. Sandoval — and pharmaceutical industry representatives — said they worried about a particular stockpiling effect

AB405, sponsored by Democratic Assembly members Chris Brooks and Justin Watkins, will restore more favorable rates for customers with rooftop solar panels who want to sell excess energy they produce back to the grid. It also enshrines into law consumer protections for people who buy solar systems.

It wouldn’t allow rates quite as generous as the ones that predated the Public Utilities Commission’s 2015 decision, but customers could now get 95 percent of that “retail” electricity rate. The rate would decline periodically in tiers as more Nevadans install rooftop solar.

The bill passed out of the Assembly on a 38-2 vote in May, then passed unanimously out of the Senate in June.

“I know all the solar folks are here — I know we had a little hiccup in between all of this — but without that I honestly do believe we wouldn’t be standing here today with the success that we’re having so I really am pleased,” Sandoval said.

Sandoval also signed SB146 on Thursday, another energy-related bill sponsored by Spearman. It requires utilities to include a distributed resources plan — benefits and costs of distributed energy resources, such as storage or rooftop solar — when filing regular future planning with the state’s Public Utilities Commission.

“These three bills I’m going to sign today really will secure our position and our green energy future for the state of Nevada,” Sandoval said before the bill signing.

Federal law generally specifies that an immigrant is not eligible for federal public assistance until at least five years after they came to the country. States can waive the five-year threshold for Medicaid and the Children’s Health Insurance Program.

The bill allows immigrant children who are legally in the country to enroll in the federal programs even if they haven’t been in the U.S. for five years as long as they’re 18 or younger.

“It really makes me proud as a governor to be able to serve the Nevada family and make sure everybody is taken care of instead of having to wait five years to get this,” Sandoval said at the bill signing. “So this is an important step in our state to make sure that everybody — I mean I see these two children here — all our kids, the whole Nevada family, is taken care of.”

Sandoval’s bill-signing tour through Las Vegas ended on the UNLV campus Thursday afternoon, where he penned his signature on three pieces of legislation related to higher education.

SB553 grants UNLV a $25 million appropriation for the university’s fledgling medical school, which has accepted its inaugural class and plans to start classes in July. The money will go toward construction of a building to house the medical school. At the end of the legislative session, Sandoval announced that an anonymous donor had pledged another $25 million toward the medical school.

That same bill also gives the university $1.75 million — seed money to fund planning for a new College of Engineering building.

The governor also signed into law SB548, which establishes a prestigious training program for promising future teachers called the Nevada Institute on Teaching and Educator Preparation, and SB457, a measure that allows student veterans to receive college credit for military education, training and occupational experience.