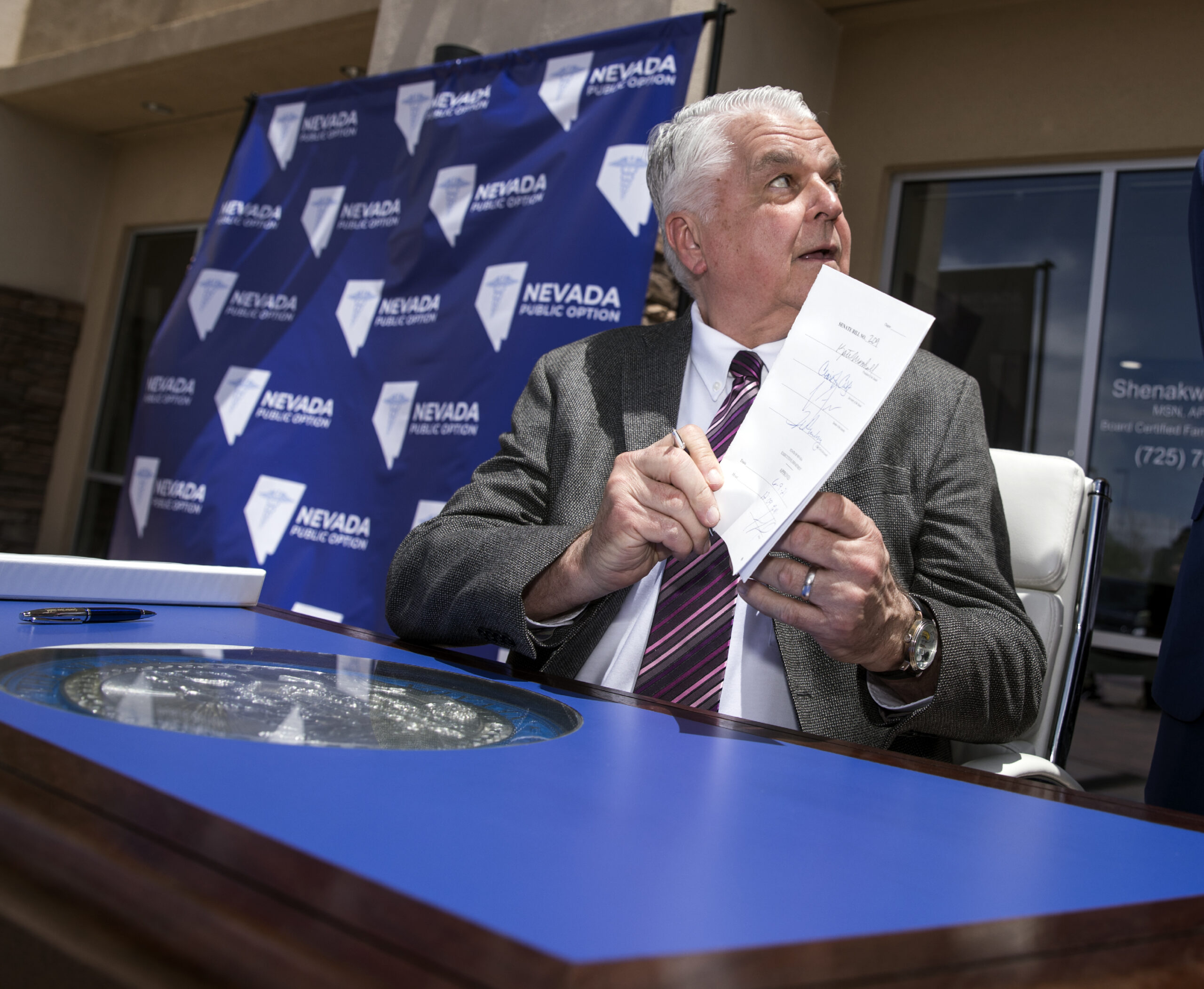 Nevada became the second state in the nation to enact a state-managed public health insurance option on Wednesday, with Gov. Steve Sisolak’s signature transforming a bill that hadn’t even been made public until six weeks ago into law.

Though Sisolak voiced his intent to sign the bill last week, his signature formally ends a more than four-year-long quest to establish a public option in Nevada, though, in many ways, work on the public option is just beginning. Under the new law, Nevada’s public option plan won’t be available for purchase until 2026, giving state officials time to conduct an actuarial study of the proposal to determine whether it will accomplish proponents’ goals of increasing health care access and affordability and at what cost. It also provides time for state officials to transform the still relatively broad-strokes concept into a workable policy and return to the Legislature in 2023 with any changes that may need to be made to the law.

“I'm always looking for ways to expand health care opportunities in Nevada for Nevadans, and that's what this legislation does,” Sisolak said during a bill-signing ceremony in Las Vegas. “By leveraging the state's existing health care infrastructure and reducing costs, it is my hope that Nevadans will have improved access to comprehensive insurance.”

Senate Majority Leader Nicole Cannizzaro, who’s expecting her first child this summer and sponsored SB420, nodded to the effect it could have on the state’s youngest residents.

"This bill will help to open up some more doors in critical investments in prenatal and maternal care and Medicaid for Nevada moms and babies right here in our Silver State,” she said Wednesday.

Heather Korbulic, who as head of the state’s health insurance exchange will have a key role in the development of the public option, said in a statement that she plans to “bring all stakeholders together to outline the actuarial study and conduct a meaningful analysis of the public option as it relates to every aspect of health care throughout the state.”

“In the meantime I'm going to continue to focus on getting Nevadans connected to Nevada Health Link where we have an open enrollment period that runs through August 15th and — thanks to the Biden administration — almost everyone eligible is getting financial assistance,” she said, in a nod to the American Rescue Plan’s expansion of exchange subsidies.

Richard Whitley, director of the Department of Health and Human Services, in an interview last week said the public option isn’t “a single solution” but “does definitely enhance the opportunity for individuals to gain access to health care.”

“I think that as an option for coverage, it definitely enhances that overall framework,” Whitley said.

Under the new law, insurers that bid to provide coverage to the state’s Medicaid population will also be required to bid to offer a public option plan, with ultimate decision-making authority left to the state to decide how many plans to approve. The plans would resemble existing qualified health plans certified by the state’s health insurance exchange, though the legislation would require the public option plan or plans to be offered at a 5 percent markdown, with the goal of reducing average premium costs of the plans by 15 percent over four years.

The public option concept first surfaced during the 2017 legislative session, when former Assemblyman Mike Sprinkle (D-Sparks), introduced a bill to allow Nevadans to buy into the state’s Medicaid program, nicknamed Medicaid-for-all. While an amended version of that proposal, instead establishing a Medicaid-like plan, cleared the Legislature, former Gov. Brian Sandoval ultimately vetoed it.

Sandoval, a health care advocate who earned plaudits from Democrats for being the first Republican governor in the nation to opt into Medicaid expansion under the Affordable Care Act and fought to protect the federal health care law in 2017, said at the time of his veto that the public option proposal was “moving too soon, without factual foundation or adequate understanding of the possible consequences.”

Sprinkle proposed a narrower version of his vetoed bill during the 2019 legislative session, nicknamed Medicaid-for-some, that failed to advance after he resigned from the Legislature facing allegations of sexual harassment. Cannizzaro revived the proposal in the waning days of that session in the form of an interim study of yet another public option proposal — this time to allow Nevadans to buy into the state Public Employees’ Benefits Program rather than Medicaid.

That study, which was carried out by the health policy firm Manatt Health, was released with little fanfare in January as lawmakers geared up for the legislative session during some of the pandemic’s darkest days.

The study — which looked at both a PEBP buy-in proposal and a state-sponsored qualified health plan proposal — found that a 10 percent reduction in insurance plan premiums would translate to between zero and 1,500 uninsured individuals gaining coverage in the first year of the plan’s existence, while a 20 percent reduction would reduce the state’s uninsured population between 300 and 4,800 people. There are about 350,000 uninsured Nevadans.

“These enrollment figures highlight that a 10 percent or 20 percent reduction in premiums may not be enough to substantially encourage the currently uninsured to enroll in coverage for the first time,” the study concluded.

For the next couple of months, the public option remained in the background as lawmakers tackled other health care policies. But the public option resurfaced in mid-April when Cannizzaro confirmed she was working on legislation behind the scenes and started meeting with health care industry representatives to present the concept.

In late April, the proposal was introduced as SB420, this time with the goal of leveraging the state’s purchasing power with Medicaid managed care contracts with insurers to compel insurance companies to provide affordable public option plans, too. Unlike some previous iterations of the proposal, the plan would not be offered by a public insurer — such as Medicaid or PEBP — but by private insurers.

Proponents, including progressive groups like Battle Born Progress, the Progressive Leadership Alliance of Nevada and Planned Parenthood Votes Nevada, threw their weight behind the bill, arguing that the proposal would make health care more affordable and accessible. Opponents, including the Nevada Hospital Association, the Nevada State Medical Association and the Nevada Association of Health Plans, countered that it would do just the opposite, going so far as to destabilize Nevada’s already-fragile health care system.

Specifically, health care providers argued that a provision in the bill setting the floor for rates for the public option plans at Medicare rates — which providers say are better than Medicaid rates but not as good as those paid by private insurance plans — would act as an effective cap. They also pushed back on a section of the bill requiring doctors who contract with Medicaid, the Public Employees Benefits Program and workers’ compensation to participate in at least one public option plan.

Instead, opponents of the bill argued that the state should focus on targeting people who are uninsured but either eligible for Medicaid or for subsidies through the state’s health insurance exchange. Together, those two groups represent more than half of uninsured Nevadans. To that end, they proposed an amendment in the final days of the session to scale back the bill to just an actuarial study of the public concept proposal and to look further into how to get Nevadans already eligible for Medicaid or exchange plans insured. But that amendment that was never seriously entertained by Cannizzaro.

While many of the groups that testified in support of and against SB420 were Nevada-based organizations, the bill also attracted significant national attention, including support from the Committee to Protect Health Care, the Center for Health & Democracy and United States of Care and opposition from the Partnership for America’s Health Care Future, a coalition of some of the health care industry’s biggest names — including the American Hospital Association, America’s Health Insurance Plans, and the Pharmaceutical Research and Manufacturers of America — as well as the Koch-backed Americans for Prosperity and LIBRE Initiative. Many of those organizations devoted dollars toward their efforts, sending mailers and running ads in support of or against the proposal.

Sisolak’s signature on the public option bill comes as interest in establishing a national public option, as President Joe Biden promised on the campaign trail, appears to be dwindling. Individual states, however, have continued to pursue their own public option proposals. Washington, the first state in the nation to enact public option legislation, has started to offer plans for sale this year and a bill creating the “Colorado Option” passed out of the Colorado legislature on Monday.