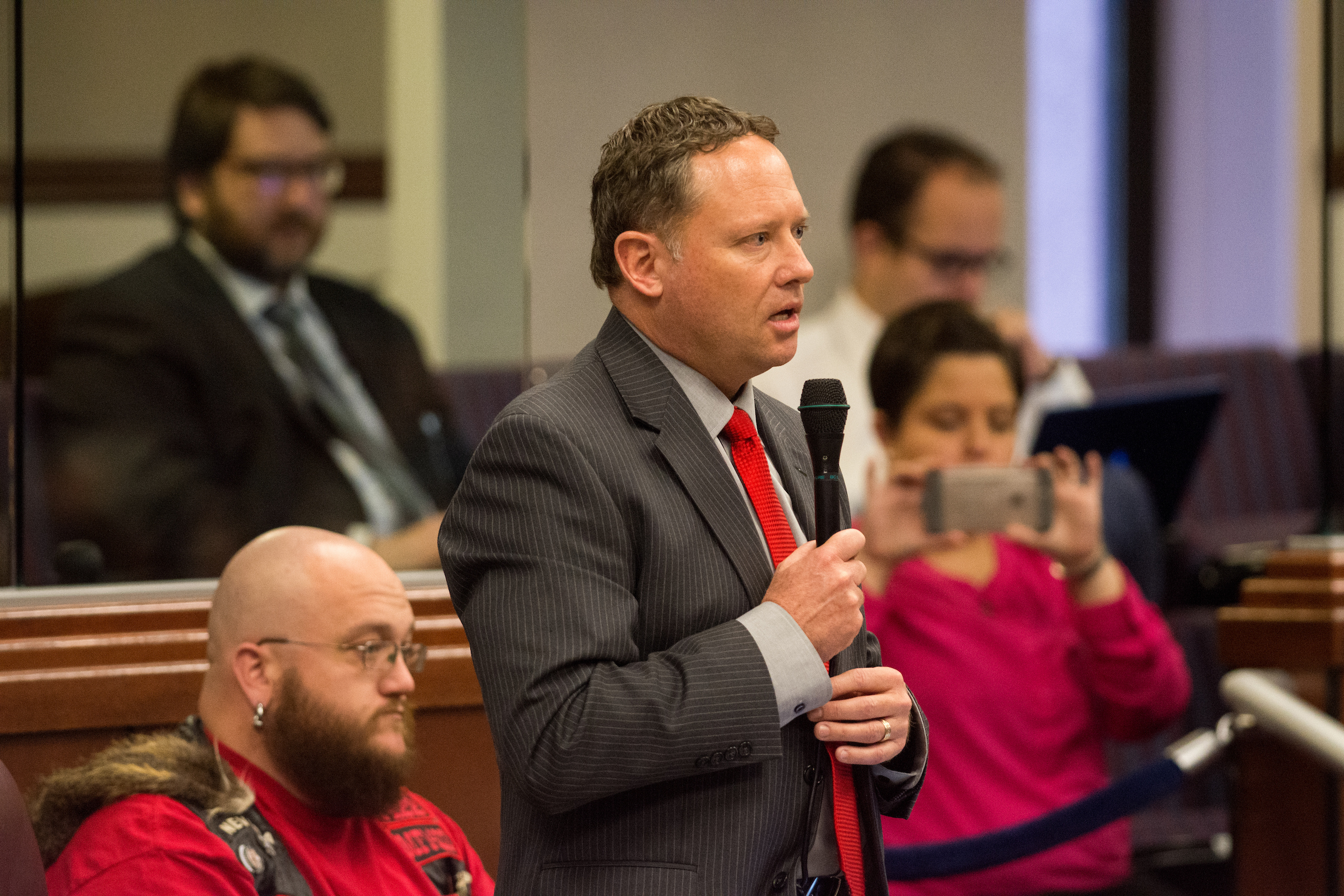 Democratic Assemblyman Mike Sprinkle announced his resignation on Thursday in the wake of allegations of sexual harassment against him.

Sprinkle, who was not present in the legislative building Thursday morning, announced his decision in a statement released by the Assembly Democratic Caucus. It marks the second time in two weeks that Democratic lawmakers have stepped down over misconduct.

“In light of the growing sexual harassment claims against me I will be resigning from my position as state assemblyman effective today,” Sprinkle said in a statement. “I am truly disappointed in myself for anything that I have done to discredit the legislature or the state of Nevada. As for the claims against me, I am so sorry that anyone ever felt harassed or threatened by me.”

First elected in 2012, Sprinkle is a firefighter and paramedic with the Reno Fire Department and represented a Sparks-area Assembly district. He chaired the Assembly Health and Human Services Committee and was perhaps best known for introducing “Sprinklecare,” a bill in 2017 that would have allowed anyone to buy into a Medicaid-like program.

The assemblyman did not return requests for comment from The Nevada Independent but said in the statement that he was “taking full responsibility for my actions” and would “continue to seek therapy” and seek forgiveness from his family and others.

No lawmakers discussed Sprinkle’s resignation during an Assembly floor session on Thursday, and his seat was marked vacant.

In an interview afterward, Democratic Assembly Speaker Jason Frierson said he was not aware of any specific allegations being formally filed against Sprinkle. Legislative Counsel Bureau Director Rick Combs also said complaints had not been filed with him.

“He informed us that he was aware of there being allegations that made him second-guess whether or not he thought he should remain in the body,” Frierson told reporters. “I think we have a process available, but he decided to — rather than exercise his opportunity to go through that process — to resign.”

He characterized the resignation not as an impediment to the Democrats accomplishing their agenda but a sign that the Assembly is willing to address issues within the body.

“I think what this really means is that we are willing to hold ourselves accountable and make sure that we deal with trouble behavior and move this state forward,” the Assembly leader said. “I think this is a reflection of us making sure that we maintain an environment that's appropriate in this building to get work done.”

Frierson said he would like to fill the seat so no district goes unrepresented, but said he doesn’t have applications or a list of potential replacements. Washoe County commissioners will be tasked with appointing Sprinkle’s replacement, though it is unclear how soon that process will begin.

It’s also unclear who will replace Sprinkle for the chairmanship of the Health and Human Services Committee.

Democratic Gov. Steve Sisolak shared the resignation letter Sprinkle submitted to him on Thursday and condemned the alleged behavior.

“I am profoundly disgusted and outraged by Mr. Sprinkle’s reported abuse and misconduct ... I commend the courage of those who came forward to report Mr. Sprinkle’s behavior,” he said. “Let me send a clear message to any and all individuals who think it’s okay to harass others in the workplace: such behavior will not be tolerated, and my administration will see to it that such bad actors face the consequences of their behavior.”

"There is no place in this institution for sexual harassment," Assembly Republican Leader Jim Wheeler said in a statement. "We are pleased that he resigned and saved the body any unnecessary distraction in such a critical time."

Thursday’s resignation comes a little more than a week after Democratic Senate Majority Leader Kelvin Atkinson stepped down, saying he was pleading guilty to a federal charge for misusing campaign funds for his personal use.

Frierson chafed at a question about whether there is more Democrats need to do to internally vet candidates ahead of the election, given the resignation of the two legislative Democrats in two weeks.

“I think you made it a partisan thing and it's not. It's not a Democrat or Republican thing. This is an issue of making sure we have an appropriate workplace environment,” Frierson said. “We have a vetting process, and we also have a process to remove individuals that are not behaving appropriately in the institution.”

Lawmakers launched a formal system for reporting sexual harassment after issues in 2017 with Democratic state Sen. Mark Manendo. He stepped down from his post after a two-and-a-half month investigation into allegations of sexual harassment revealed witness tampering and multiple instances of misconduct dating back years.

The Legislature also approved rule changes in the final minutes of the 2017 session that required legislative staff to develop a formal reporting system for complaints, expanded existing harassment policy to specifically address lobbyists and created a new Legislative Code of Ethics.

Under the new process, the investigations law firm Van Dermyden Maddux is responsible for maintaining a phone hotline and an online portal where people can submit complaints of inappropriate behavior that is or may become harassment or sexual harassment. Complainants and witnesses can also upload photos or other documents to support their allegations.

Once a complaint is submitted, investigators are allowed to continue a conversation with the person who submitted the complaint while maintaining his or her anonymity to determine whether the conduct they experienced constitutes a violation of the Legislature’s harassment policy. If investigators determine it does, legislative leaders have the prerogative to have the firm investigate it, investigate it themselves or have another firm step in.

“It is clear that the Legislature has established a policy that takes cases of harassment seriously, and that this policy has been effective,” Executive Director Annette Magnus said in a statement. “We remain steadfast in our belief that abusers have no place in the progressive movement or the political environment, and that they must be rooted out and exposed for what they are.”