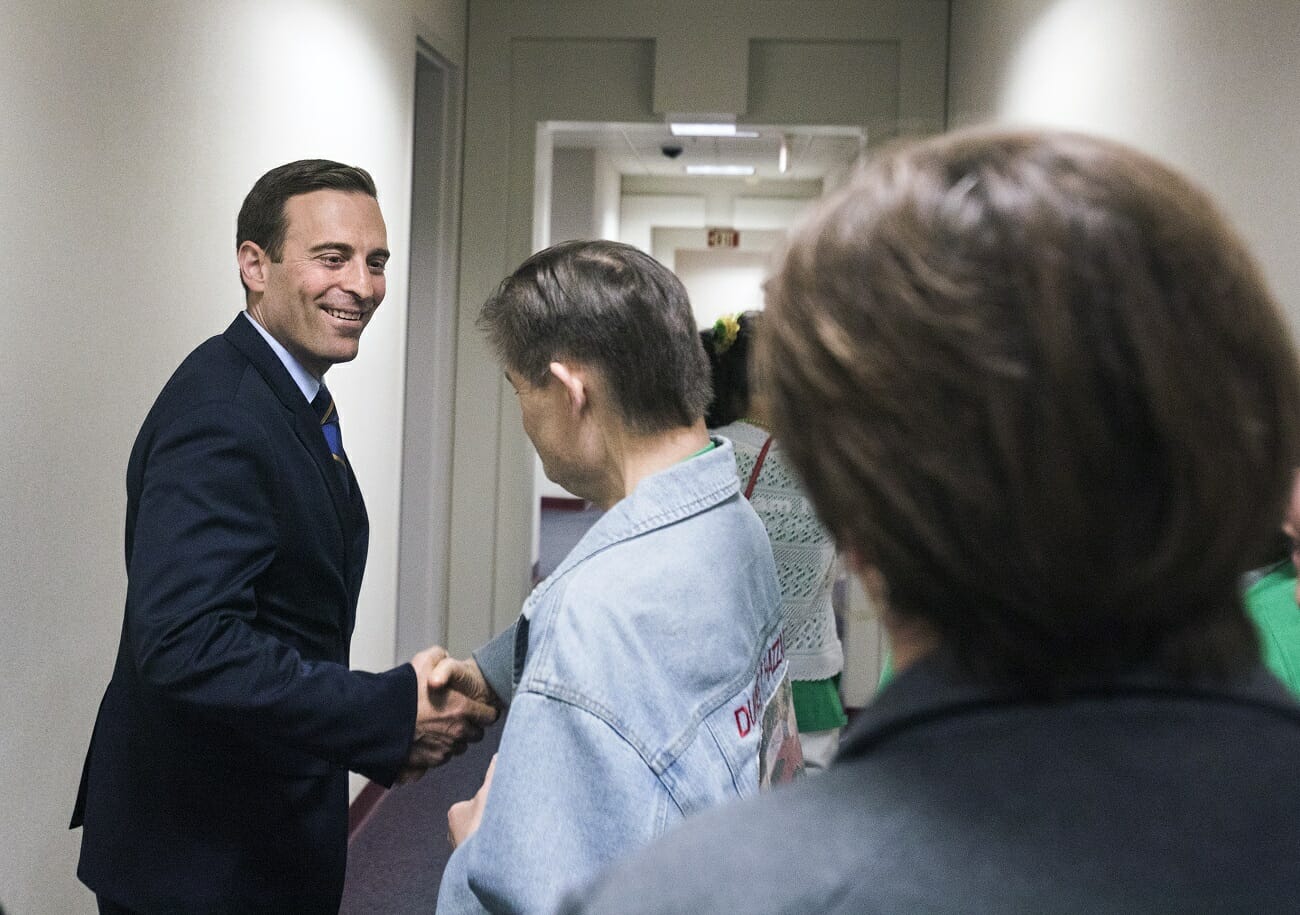 Attorney General Adam Laxalt acknowledged that he was making a “tough request” when he asked Nevada’s top gaming regulator to intervene in a contentious lawsuit on behalf of the Las Vegas Sands, and conceded that it could look like the casino giant — one of his biggest campaign donors — was getting special treatment, according to a transcript of the secretly recorded conversation.

But the Republican attorney general , against the advice of one of his deputy attorneys general, argued that the regulatory board should file an amicus brief explaining confidentiality and gaming laws to the judge.

Laxalt said the Sands should be left to fight the more complex battles, but seeks to close the deal on a more limited intervention.

“I think it’d be a 4-page amicus, and it’ll be as narrow as you would be comfortable with, simply laying out ‘here’s the law as we see it,’” Laxalt suggests. “It doesn’t even need to mention the facts of the case. It could be literally that narrow.”

The Sands was fighting at the time to keep an internal audit report away from the plaintiffs in a wrongful termination lawsuit, one it eventually settled for a reported $75 million, and had unsuccessfully tried to persuade regulators at least twice before to take the rare step of helping them in that effort.

“The judge has made notice of the fact that the State hasn’t made their opinion, and that’s somehow going to factor in, probably negatively,” Laxalt told Gaming Control Board Chairman A.G. Burnett during a hastily arranged coffee shop meeting in March 2016, shortly before District Judge Elizabeth Gonzalez was expected to rule on the matter. “I think she’s under the impression that if this is important enough to the Gaming Control Board or the State, they would have weighed in on this thing.”

State Democrats have raised questions about the meeting and concerns that Laxalt — a likely gubernatorial candidate — inappropriately used his position to assist casino magnate Sheldon Adelson. A deputy attorney general had opined just two weeks earlier that “avoiding involvement in this litigation would be consistent with the Board’s historical practice.”

Laxalt indicated he was aware of the conversations between the board and his subordinates. The transcript of the March 2016 recording, which was prepared by staff of the Legislative Counsel Bureau, was obtained by The Nevada Independent.

Federal officials later concluded that no criminal conduct took place, but Burnett has said he was unsettled enough by the urgency of Laxalt’s request for a meeting and the persistence of the Sands that he surreptitiously recorded their conversation.

The circumstances of the meeting were already unusual. Laxalt texted Burnett on March 24 and 25 attempting to meet as soon as possible, even though Burnett, who was busy running errands, was about to leave on a weeklong family vacation the next day and proposed a later date, and even a later ride with his sometime cycling buddy.

Laxalt ended up personally picking Burnett up from a Reno dealership where the regulator was getting his vehicle serviced, and taking him to a coffee shop for their conversation.

Burnett noted that “there must be some kind of emergency brewing,” over the circumstances, which Laxalt chalked up to “timing.” The state’s Supreme Court had scheduled a hearing on whether to remove Gonzalez from the Sands case in Carson City on Tuesday, April 5 — the day after Burnett was slated to return from his family vacation.

If it decided to intervene, the board would have had move quickly, since Gonzalez could issue a ruling on the discovery dispute in short order if the Supreme Court ruled she could stay on the case.

The Sands argued that an internal audit was subject to a cloak of confidentiality because it had been submitted to the Gaming Control Board, even though it had also been provided to other agencies. Burnett’s position, which he explained to Laxalt, was that providing it to entities outside of the regulatory board waived the right to confidentiality.

Laxalt noted that the initial full request made by the Sands to the board was “absolutely not possible or appropriate,” but the attorney general encouraged Burnett to intervene in a limited fashion. If the District Court judge ruled the internal audit was not confidential, it could make gaming licensees less likely to submit reports to the state regulators, he said.

“Is this case going to create a chilling effect for you guys, and you guys will have to figure that out,” Laxalt asked. “There will be less cooperation and people will think there’s an issue.”

When Burnett defended the status quo as a “good statute” and a “solid statute,” Laxalt challenged him.

“Philosophically, do you agree that anything made in preparation specifically for a Gaming Control Board request has to be protected both ways?" Laxalt said. "I mean, if not, then no one’s going to make anything for you guys.”

Burnett pointed out that the District Court’s ruling on the document’s confidentiality would likely be appealed, and that it wasn’t as pressing a concern because it wasn’t a Supreme Court decision and wouldn’t be setting precedent.

“I don’t want to affect her or interfere with her,” Burnett said. “My thought, and my staff—and I think if you ask (deputy attorneys general) they would agree—let the judge make her ruling. Whatever the ruling is, it’s going to get appealed, and that ruling in turn could get appealed.”

What could set a precedent is regulators getting involved in a case to begin with, Burnett said.

“The optics would be horrendous, and there is other litigation going on. You know, there’s hundreds of cases right now that these same lawyers are probably fighting on,” he said. “The Bar would become well aware of the Board and what it did and what it could do in terms of intervening, and so it would be a slippery slope.”

At one point, Laxalt acknowledged that asking the board to intervene in the case could create public perception issues.

“It’s a tough request, and that’s why I’m having the one-on-one conversation with you,” he said. “And they’re asking me—they’ve asked you, I’m following up with you and seeing where we are on this thing. I think it is a challenging request because it will look like the Sands is getting a special thing...and so I wouldn’t do anything that jeopardizes me either, and that’s why the only way I think it’s even possible is if we do think that the narrow privilege is in some way in jeopardy and we kept it that way.”

Laxalt also appeared to downplay Gonzalez’s knowledge of confidentiality in gaming law at one point, saying a short amicus brief could help a judge “that probably has never operated in a space, or if anything, one or two cases.” Burnett countered that she should be “well familiar with gaming law.”

At one point, Burnett asked Laxalt why the Sands is so adamant about having the regulatory board intervene.

“What I can’t understand—help me with this. Why is Sands—why are they so adamant on this and not giving up?” Burnett asks. “Why are they pushing you right now? Why are they pushing my staff? They did initially, but then I thought they backed off. They must be talking to you about it.”

In his response, Laxalt insisted he’s not taking a side.

“Well, because they had the hearing. I mean, I think they didn’t back off,” he said. “Believe me, I’m not—I see everything. I’m not trying to pitch a side or anything on it, but it’s simply because they are still fighting, and they haven’t given it up, and it’s just been the timing of stuff of the last few weeks. I guess they’ve been distracted.”

Laxalt also argued that filing a brief articulating the narrowness of the confidentiality law could actually be detrimental to the Sands’ argument that broad swaths of their information is privileged and non-discoverable. The proposed brief, as Laxalt envisions it, “actually makes the rest of the case harder for them.”

At one point in the recording, Laxalt asked Burnett if Gov. Brian Sandoval or his chief of staff, Mike Willden, have already reached out about Sands’ request. Laxalt says he wanted to talk one-on-one with the regulator to ensure “there aren’t too many cooks in the kitchen.”

Sandoval's spokeswoman, Mari St. Martin, confirmed the governor had been contacted by the Sands but did not appeal to the Gaming Control Board on the company's behalf.

"The governor did receive a brief call on the issue from a representative from the Las Vegas Sands and informed them any legal matters regarding the Gaming Control Board should be referred to the Board or its legal counsel," she said in a statement.

At the start of the transcribed recording, Laxalt opined that judges should be appointed rather than elected, and said they held more policymaking power than Assembly members who “don’t get anything actually done.”

“You know, it’s like, until you get screwed by a judge, you don’t realize how important it is,” he said. “One other thing—it’s like, I’m always like ‘I don’t know why you spend so much money on an Assemblyperson,’ the judge is more important.”

The transcript ends before the two men wrap up their conversation.

State lawmakers led by Democratic Assemblywoman Maggie Carlton, who filed the initial legislative subpoena on May 3, plan to hold a hearing Wednesday on a bill giving the Gaming Control Board the ability to hire its own legal counsel independent of the attorney general’s office. Burnett said he plans to attend the hearing, while Laxalt sent a three-page letter to Carlton on Monday, asking for questions in advance and fearing a ‘partisan ambush.’

He also said lawmakers hadn’t provided his office with any of the material obtained in the subpoena, and requested enough time to prepare thoughtful, written responses to pre-filed questions.

Carlton denied the request in a letter of her own also sent on Monday, noting her “disappointment” that Laxalt appeared to be expressing reservations about attending the Wednesday hearing. She said on Monday that she didn’t plan to issue subpoenas compelling Laxalt or Burnett to appear at the hearing.

5-17-17 at 12:36 p.m.: This story has been updated to correct an error in a transcript of a recording provided to The Nevada Independent. At one point in the recording, Attorney General Adam Laxalt says "philosophically" not "don't go soft on me."