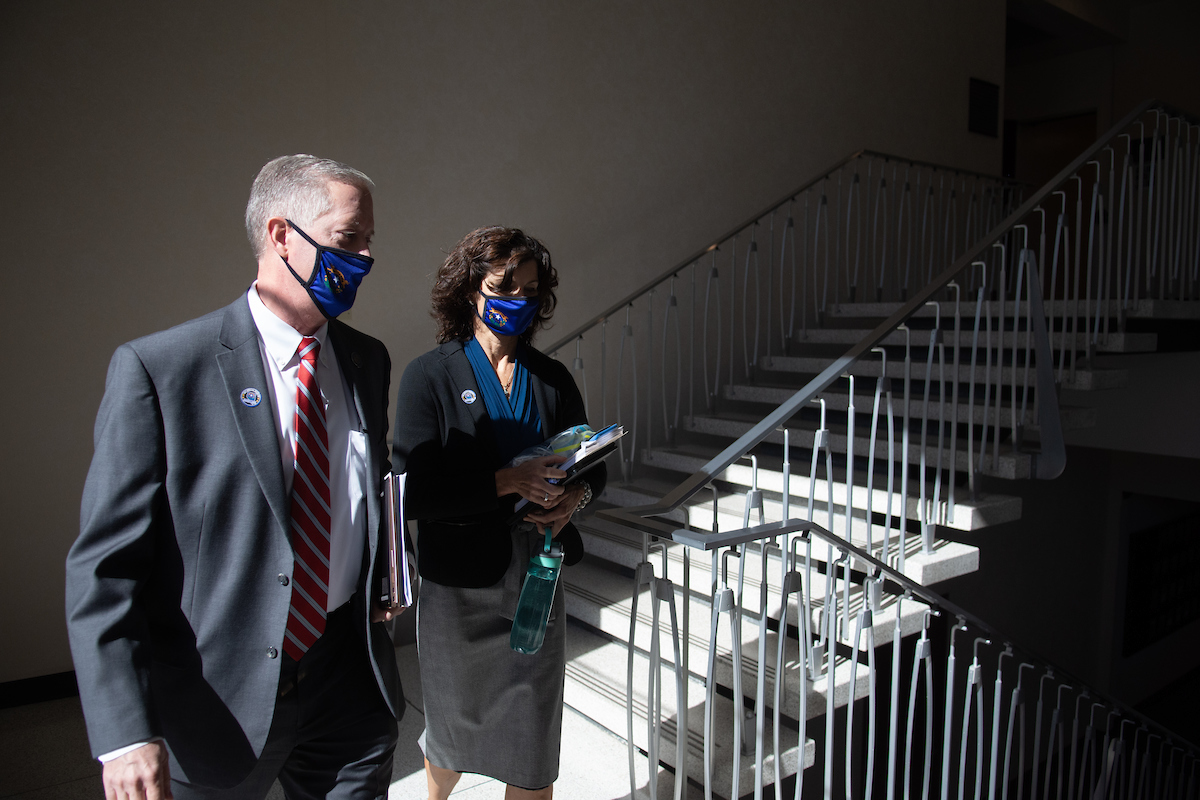 A pair of teacher union-backed initiative petitions aimed at raising gaming and sales taxes appear to be headed to the 2022 ballot with no legislative intervention.

The proposals, spearheaded by the Clark County Education Association and signed by several hundred thousand voters, are hitting a deadline on Friday for legislative action. The Democrat-controlled Senate did not take up the measures on Thursday, in spite of an ill-fated motion from Sen. Keith Pickard (R-Henderson) to formally declare there would be no further consideration on the measures.

“Last year, more than 200,000 Nevadans participated in the initiative petition process in the middle of a pandemic,” Pickard said in a floor speech on Thursday. “Nevada voters took the time to sign petitions to make their voices heard. We hear you. I want to give all Nevada voters an opportunity to vote on these issues.”

But Democrats shot down the motion in two successive votes. With no floor session scheduled before the deadline — the 40th day of the session — the proposals are expected to proceed to the ballot.

Senate Majority Leader Nicole Cannizzaro (D-Las Vegas) described the maneuver as “nothing more than saying exactly what the process is.” She said there continue to be conversations with teachers and others to consider options for raising revenue apart from the sales and gaming tax increases on the table.

“This motion was nothing more than a political stunt, in order for some claim of trying to make sure that the voters are heard,” she said. “Frankly, Sen. Pickard was given an opportunity that he specifically asked for, in order to vote for revenue to this state, in the middle of a budget crisis.”

Cannizzaro was referring to an instance during the summer special session in which Pickard suggested he might join Democrats to support raising the tax on mining — giving them the two-thirds majority they need to increase revenue — then recanted. Democratic lawmakers derided him as a flip flopper, even buying hundreds of pairs of flip flops and arranging them in a trail around the legislative building to his office.

Pickard said he didn’t want to let the deadline pass without acknowledging the petitions, although he said he would personally plan to vote against them if they appear on the ballot.

“It's not a stunt. It's about listening to people,” he said. “If she wants to call that a stunt, she can take that up with those that signed the petition.”

With no action taken on the two initiatives, they’ll presumably move to the 2022 ballot (state law allows initiative petitions to be withdrawn by the backers).

Clark County Education Association Executive Director John Vellardita said in an interview that it was “no surprise” that lawmakers didn’t take up the petitions within the 40-day window. Prior to the session, Democratic leaders including Cannizzaro and Assembly Speaker Jason Frierson said they didn’t plan to support the union’s pair of tax proposals.

Vellardita reiterated that the union wasn’t “wed” to the initiatives if an alternative funding structure for K-12 education comes out of the 2021 Legislature.

“If there's an alternative that emerges, and it satisfies what we think needs to be done, we're going to buy into that alternative,” he said. “I don't think that should be a surprise to anybody. I think we've telegraphed that.”

Vellardita — who derided the Senate floor activity and Pickard’s motion as “theatrics” — said that the union was looking to fully fund SB543 (the 2019 legislation overhauling the state’s school funding formula) and find a “dedicated revenue stream” to fund that transition to the new plan. Funding that transition could cost somewhere in the neighborhood of $2 billion.

The union leader said that CCEA wasn’t asking for $2 billion more in revenue this session, but wanted to see a “significant investment on the front end” along with a 10-year roadmap to get the state to the national average of state investments in K-12 (he declined to name a number on the front end investment, saying it was “fluid”).

Vellardita said the union was well aware that it would need to work across the aisle to garner the necessary two-thirds support for any potential tax increase. But he warned of possible electoral consequences if lawmakers ended up not taking sufficient action; they could be on the same ballot as highly unpopular tax increases.

Asked to clarify, Vellardita said that talk of economic recovery by Sisolak — who is up for re-election in 2022 — needed to start with investing in education.

“Depending on what comes out of this session, there's going to be a record on whether or not education was properly funded, whether or not leadership could do what I think the public wants, and it starts with the governor,” he said.

CCEA announced the pair of initiatives in January 2019 as a solution to raise the tax revenue necessary to fully fund Nevada’s K-12 education system. At the time, the union estimated that the tax rates would raise an extra $1 billion per year, though those estimates have likely changed amid the pandemic.

Individual counties have differing sales tax rates, meaning that change would result in a 9.875 percent sales tax in Clark County, which would be one of the highest rates in the nation.

The union spent considerable sums in its effort to qualify the petitions, each of which was turned in with more than 200,000 signatures, well over the state-required minimum of 97,598 signatures collected. The two political action committees set up to garner the signatures — Nevadans for Fair Gaming Taxes and Fund Our Schools — raised a combined $1.54 million from the union throughout 2019.