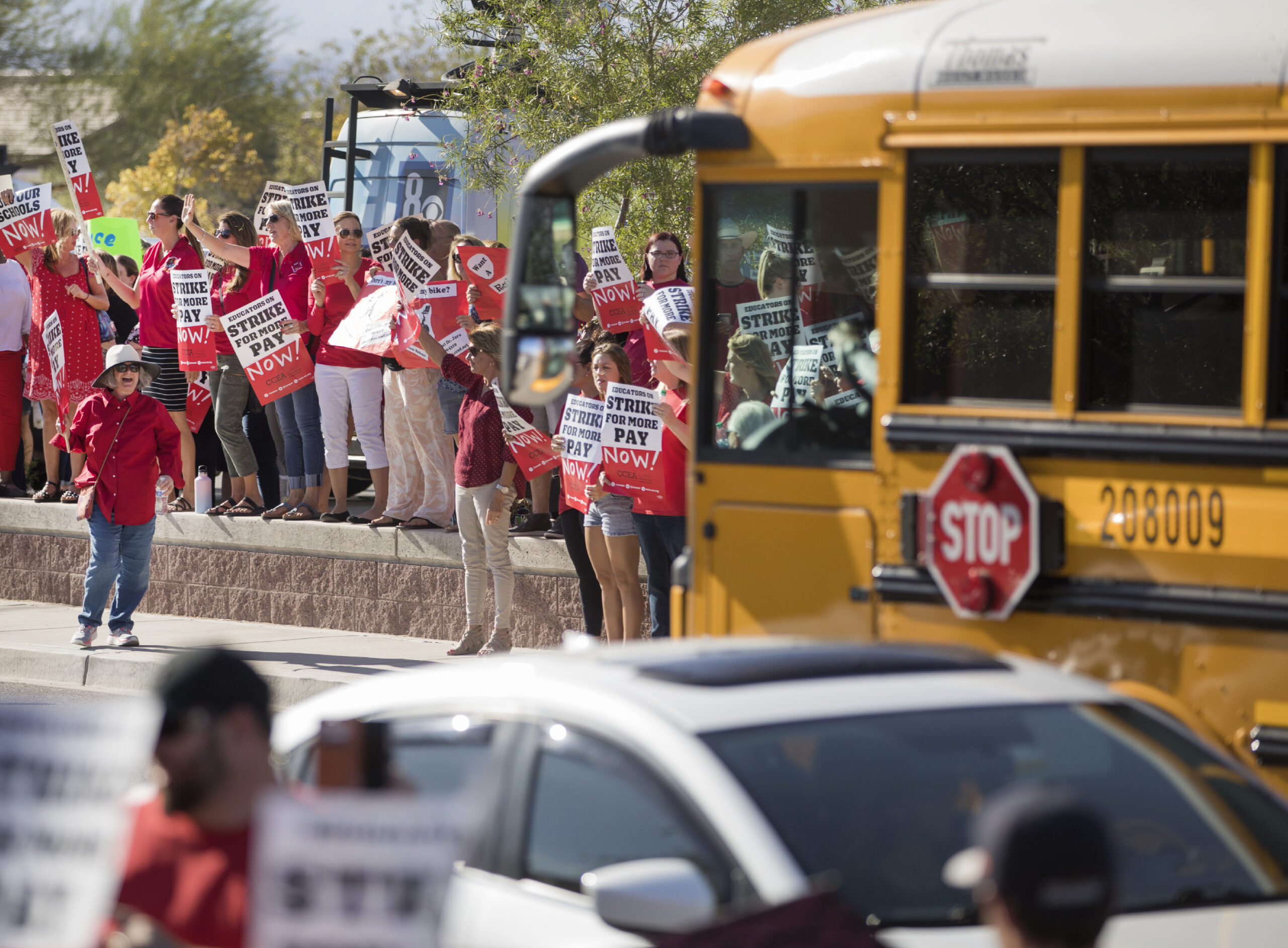 Sales tax is the second revenue stream targeted by a Clark County teachers union to significantly bolster education funding, according to an initiative petition filed Wednesday.

The petition calls for raising the Local School Support Tax (LSST) — part of the overall sales tax — from 2.6 percent to 4.1 percent, which would be a 58 percent increase. The proposed change would increase the state sales tax rate to 8.35 percent, making it one of the highest in the country. Sales tax rates, however, differ by county. The proposed increase would bring Clark County’s sales tax rate up to 9.875 percent.

It’s the second tax increase sought by the Clark County County Education Association. Nevadans for Fair Gaming Taxes, a PAC formed by the union, is backing the other initiative petition filed Monday, which seeks to boost the gaming tax rate from 6.75 percent to 9.75 percent.

Gaming taxes would be funneled into the state’s general fund, but the LSST is dedicated to education, hence its choice for the second initiative petition, Vellardita said. The LSST provides, on average, 47 percent of K-12 education funding statewide, he said.

The gaming tax, however, has more flexibility because of its home in the general fund. The union leader said he expects a variety of other needs — Medicaid reimbursement, mental health and collective bargaining among them — heading into the 2021 legislative session on top of education. Although the tax money may not exclusively wind up in schools, he considers the wiggle room a positive and expects a large share would benefit education given the constructs of Senate Bill 543, which revamps the K-12 funding system.

“There’s going to be money for other needs that the state has or is facing when it opens up that session,” he said.

Still, critics say the tax increases would burden Nevada’s gaming sector along with residents and visitors. Nevada’s existing sales tax rate (6.85 percent) is the seventh-highest in the nation, according to the Tax Foundation, a think tank based in Washington, D.C. The Silver State ranks 12th highest for its existing combined rate (8.32 percent), which includes the state sales tax rate and the average local sales tax rate.

The hefty tax increases set up a looming showdown among key industries ahead of the 2021 legislative session, which is more than a year away and follows a general election.

Bryan Wachter, senior vice president for the Retail Association of Nevada, raised concerns about attempting taxation at the ballot.

“We don’t believe that having the multi-faceted conversation to modernize Nevada’s tax structure can adequately take place on the ballot or with such a singular, laser-like focus into one tax,” he said.

Plus, Wachter said it’s a “dramatic increase” bound to be noticed by both residents and tourists, the latter of whom may second-guess purchasing something here if the sales tax is lower in their home state. And if people start changing their purchasing behavior, he said that’s the “definition of a bad tax — any tax that forces someone to make an economic choice they otherwise wouldn’t.”

The Vegas Chamber echoed that sentiment. Cara Clarke, the chamber’s vice president of communications, said in a statement that the sales tax increase would “put a tremendous burden on Southern Nevadans, especially hard working families.”

“Also, this proposal, if passed, would highly likely have a chilling effect on purchases of consumer goods by residents and visitors alike,” she wrote. “That’s the opposite effect we want.”

But Vellardita said that’s the beauty of it being a potential ballot measure — the people can decide if they want to increase an existing tax that, short of no other revenue streams being introduced, could help lower class sizes and send more money to students with extra needs through so-called weights.

“It raises the sales tax. There is no doubt about it,” he said. “But we’re not arrogant enough to say, ‘Oh yeah, this is what people have to accept.’”

Vellardita has described the proposed tax increases as the “final fix” to the state’s education funding woes. The Clark County Education Association — the larger of two teachers unions in Southern Nevada — has been aggressively pursuing more K-12 funding in recent years.

He has not ruled out going after mining money, too, but hasn’t revealed the look or shape of that monetary quest. Instead, he simply said, “mining is not off the table.”

In November, the union announced it had increased members’ dues and was launching the so-called Strategic Horizon Campaign, which would seek more than $1 billion in state funding for public education. Vellardita said the union is prepared to spend $10 million to $18 million during the campaign.

The quest for more education money — at this point a perennial activity in Nevada — comes on the heels of a legislative session, where lawmakers passed SB543 to overhaul the state’s K-12 funding formula. The new law moves Nevada toward a weighted funding system and puts revenue streams into a single pot.

But for all the hype, discussion and debate about the new formula, critics have panned it as irrelevant without a significant monetary infusion. Studies have estimated it will cost $1.2 billion yearly to provide the much-anticipated weighted funds for students who are learning English, living in a low-income household, have a disability or are gifted and talented.

Vellardita said the union’s tax increase proposals would solve that problem by injecting the new formula with the needed revenue.

Buy-in from the related industries likely will be an uphill battle. The Nevada Resort Association warned that the 44 percent increase to the gaming tax could threaten jobs across the state and damage the economy. The advocacy organization, which generally prefers broad-based business taxes, also said the proposal lends itself to “the volatility that comes with depending on a single industry,” according to a statement released Tuesday.

The filing of the petitions, however, starts the clock ticking. The teachers union has until Nov. 10 to submit the 97,598 signatures required to qualify the initiative petitions to the counties for verification.

The proposed tax increases have two pathways to becoming a reality. If enacted by the Legislature and approved by the governor, they’d go into effect July 1, 2021. Or the ballot measure would need voter approval in the 2022 general election, and if that occured, they would go into effect Jan. 1, 2023.

This story was updated at 8:00 p.m. to include comments from John Vellardita and reaction from the Vegas Chamber and Retail Association of Nevada.