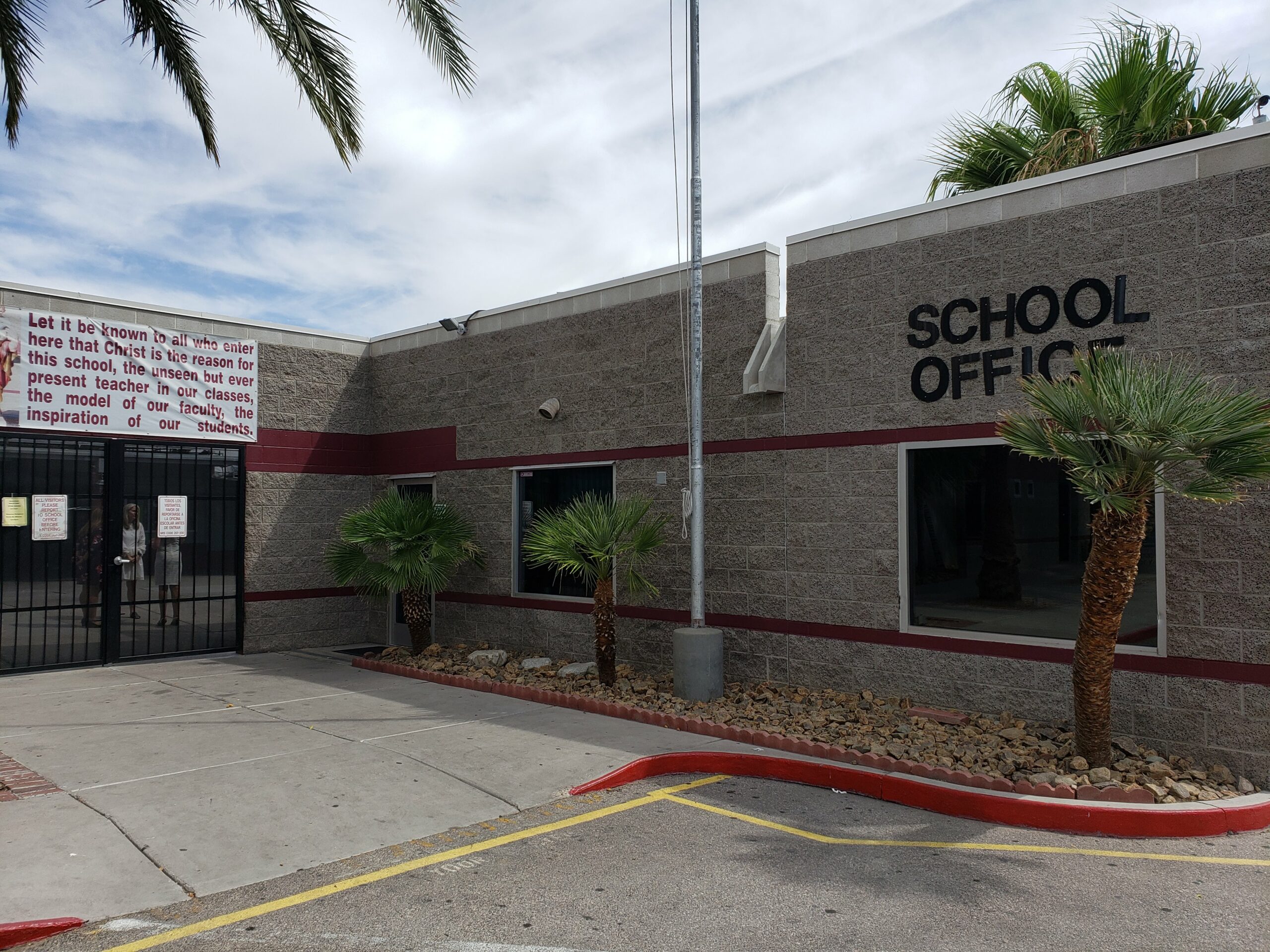 Zuleika Parra had been a stay-at-home mom for the past four years, raising four boys ages two to seven and sending the oldest one to St. Christopher Catholic School in Las Vegas with help from the state-sanctioned Opportunity Scholarship.

But shortly before classes were set to begin, she learned that the scholarship would be canceled in light of changes made during the 2019 legislative session.

“My first reaction was to cry,” she said in Spanish during a recording of the Cafecito con Luz y Michelle radio program. “How do you explain to a child that you don’t have the money to pay for the school that he wants?”

She jumped into action, eventually landing a secretary job at a different private school — Mountain View Christian School — and enrolling her children there. Her position on staff allows her to get a significant discount on tuition, which is about $8,000 each year for each child.

It’s been a transition to once again work outside the home. With the children being so young, she said she has to be organized to make sure everything gets done.

“I asked God to open doors for me. I changed my life,” she said. “Many times we sacrifice for what our children need.”

Parra’s family is one of many thrown into uncertainty by the Legislature’s changes to Opportunity Scholarships, which were created on Republicans’ watch in 2015 and help low- to middle-income families afford private school tuition. The tax credit-based program has broad support from Republicans, but Democrats in charge of state government who argue Nevada should be laser-focused on funding its cash-strapped public schools took steps to rein in the program this spring.

Last-minute legislation in the 2019 session authorized $9.5 million in additional tax credits to keep the program afloat over the next two years. It was an effort to ensure existing recipients — enrolled because of a large one-time, session-ending compromise investment in the program in 2017 — didn’t lose their award in a “fiscal cliff.”

But bill language limiting scholarship-granting organizations from serving students if they couldn’t support them for the entirety of their educational career is causing upheaval.

One major scholarship-granting organization — the Education Fund of Northern Nevada — has taken a cautious approach on the provision. According to Melissa Schroeder, the Nevada Department of Education’s point person on Opportunity Scholarships, the organization appears to only be offering the scholarship to high schoolers because it does not have the funds to ensure it can cover younger participants for all the remaining years of their school careers.

State records show that last year, 1,428 students received scholarship money through EFNN, although it’s unclear how many have been turned away this summer. The organization, which has served more than half of the 2,300 Nevada students on the scholarship, did not return a call or email seeking comment.

“Many families were impacted, but I won’t have exact numbers until the first quarterly report comes in on October 15th,” Schroeder said in an email.

AAA Scholarship Foundation, which has served a smaller number of students, has been trying to take some students on.

Kim Dyson, president of AAA, says EFNN’s decision prompted a rush of families to apply to her organization — so many that it had to close the application process several weeks early. She says about 350 applicants have self-reported that they are transferring from different scholarship-granting organizations.

AAA has a looser interpretation of the new law — that the organization shouldn’t take on new participants, but that it’s fine to keep current participants on the rolls even if it doesn’t have large reserves to cover them for years to come.

“This was one of the unintended consequences of the laws. We told parents that they weren’t going to lose their scholarship,” said Valeria Gurr, director of the Nevada Coalition for School Choice, in a Spanish interview. “It affected more than 1,000 families.”

Aside from being a political lightning rod, the scholarship is caught in multiple legal fights. The program gives businesses a tax credit if they donate to scholarship-granting organizations and was set to grow by 10 percent each year, until Democratic leaders voted to end that “escalator,” saying the program would quickly balloon to unsustainable levels.

The libertarian Institute for Justice sued on behalf of several families supported by the scholarship, arguing that the Legislature does not have the authority to freeze the program’s growth without a two-thirds vote.

A separate and earlier lawsuit from Republicans is questioning the constitutionality of SB551, the bill that extended a payroll tax rate and added the $9.5 million infusion in the current year. Should that prevail, the money could disappear.

Gurr says that beyond politics, the focus for legislators in both parties should be the well-being of the families who are calling her constantly seeking help and answers. She said many have kept their children in private schools amid uncertainty about whether their scholarship can be restored, and are going into debt to do so.

Administrators at private schools say the addition of children receiving the scholarship has been a “tremendous boost” for the schools and have given them a renewed sense of their mission. St. Christopher Catholic School in Las Vegas enrolls about 200 children, including 89 who received money from the EFNN scholarship last school year.

“Right now, we're thinking positive, and we're just hoping that these students will be able to remain with us so that they can continue on,” said Catherine Thompson, superintendent of Catholic schools in the Diocese of Las Vegas. “They've been such a wonderful addition to our school ... it has really, really been just a wonderful transition for their families to be in an environment like this where their faith is part of their education.”

Many of the students boosted by the scholarship are part of the Catholic parish already. The St. Christopher difference, they say, is a family atmosphere so small that second grade students know the middle school teachers and children in lower grades partner on activities with children in upper grades.

The average class size is 28, with some classes as big as 34 students. Nevada’s public schools, meanwhile, receive funding far below what experts have called adequate and are reckoning with what the National Education Association teachers’ union has described as the largest class sizes in the nation.

A lack of individualized attention is a main reason parents cite for seeking the Opportunity Scholarship in the first place.

“I think that we have seen a number of families apply that, before this, felt as though they wouldn't be able to afford the cost of tuition,” she said. “I think it's opened a tremendous number of doors for families who could not afford it prior.”

School administrators say they’re waiting for a few more weeks to see how many students might have to leave.

Uncertainty about the future of the program and how the legal battles will play out has put strain on scholarship-granting organizations, too. The state authorizes tax credits, but it’s up to the organizations to find businesses that are eligible for the credits and are interested in donating.

It’s not always an easy sell.

“Companies who do decide that they want to assist low income families and help their community — they have to go out of their way and change the process of how they pay their taxes,” Dyson said, and more are wondering how long the program will last and if they should even bother.

AAA is also unsure what will happen if SB551 is struck down. Dyson said she reached out to taxation officials, who don’t have a plan B for that contingency.

To be on the safe side, her organization is not reaching out to businesses and asking them to donate funds in exchange for a portion of the embattled, $9.5 million in tax credits in the bill.

“Our projections are based on the funds we feel comfortable with — they’re secure and not in question,” she said.

On the family level, Parra hasn’t just seen the changes play out in her own life. In her new job as a school secretary, she sees parents coming into the office stressed about how they will be able to continue giving their children the private education the Opportunity Scholarship helped them begin in the first place.

“Parents come in desperate, crying,” she said. “I had the advantage of getting a job, but there are parents who don’t.”