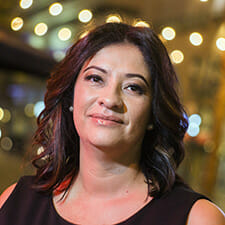 Luz Gray writes and edits Spanish-language stories for The Nevada Independent, as well as producing video and audio content in Spanish. She was the host and producer for “Contacto con Luz,” a weekly community affairs show on Univision Radio Las Vegas, from 2005 through 2016. Her show featured community leaders, politicians, nonprofit executives, and others providing a valuable connection between them and the Las Vegas Hispanic community.

In 2014, Luz served as President of the National Association of Hispanic Journalists Nevada chapter (NAHJ-NV). She also served as NAHJ’s Associate Director for Region 7 for Oct. 2014 to Oct 2015. In 2010, Luz was awarded an Electronic Media Award by Nevada Broadcasters Association for “Radio Station Hispanic Public Service Program.”

Before Univision Radio, Luz worked for a number of Spanish-language magazines and newspapers in Southern Nevada. In 2004, she was a Spanish translator for Vegas.com. She also served as editor of La Brujula de Las Vegas Magazine. From 2001 to 2003, she was a reporter and editor for Sucesos of Las Vegas newspaper. Luz also briefly worked as a freelance correspondent for Mexico’s City Grupo Reforma, covering Las Vegas entertainment and events. She worked for a number of news organizations in Mexico City after college graduation.

Luz obtained a bachelor’s degree in Journalism in 1998 from Universidad de Periodismo y Arte en Radio y Television in Mexico City. She was her class valedictorian.

Luz is passionate about helping inform her community, and bridging the gap between policy and people. Luz is a Yoga and Zumba enthusiast and enjoys spending time with her 3-year old rescued cat named Chicago. She and her husband, Christopher, have shared one adventure after another for more than 13 years.