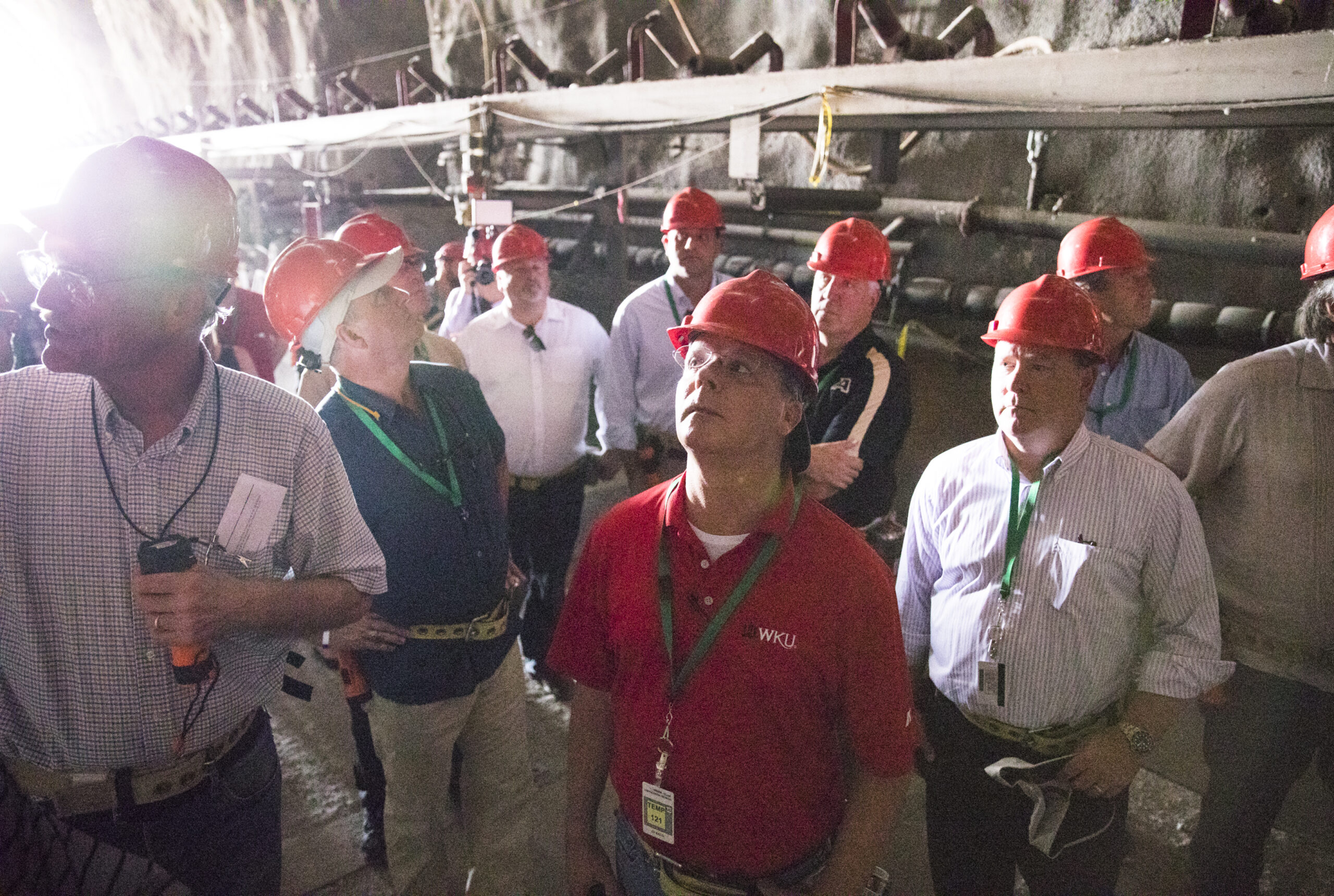 Nevada is asking the U.S. Nuclear Regulatory Commission (NRC) to revisit the issue of Yucca Mountain —where the federal government has long sought to build a national nuclear waste repository in the Nevada desert —  to keep the project from getting a license.

The move to dismiss the Yucca licensing process, which has been suspended for 11 years since Congress stopped funding it, would set the project back years if a future administration tried to revive it and if Nevada continued to oppose the project.

Dilger was appointed director of the state nuclear agency by Gov. Steve Sisolak in 2020.

“Many of them back there [in D.C.] know that we will fight them every step of the way,” Dilger said of the state’s stalwart opposition to the project.

“Every time I talk to [federal officials], the first thing out of my mouth is Nevada has been fighting this since ‘87,” Dilger continued, citing the year that Congress amended the Nuclear Waste Policy Act to deem Yucca as the nation’s nuclear waste receptacle.

“This position has not changed, it’s not going to change,” Dilger said. “If you want a fight, we’ll give it to you.”

President Joe Biden's Department of Energy (DOE) has put Yucca on the back burner and is pursuing building temporary nuclear waste storage facilities. Those would take the pressure off of building a permanent repository in the near term.

According to a 2021 Government Accountability Office (GAO) report, 86,000 metric tons of spent nuclear fuel is stored on-site at 75 operating or shut down nuclear power plants in 33 states. That load is estimated to grow by about 2,000 metric tons yearly.

The state's legal team has assured Dilger that if they fail to get the licensing process closed, their legal position would not be negatively affected. Dilger said he estimates the NRC will rule by sometime in November on whether to resume the adjudicatory portion of the licensing procedure for the project.

If the NRC agrees, the state is prepared to make three arguments about why the licensing process should be closed. A ruling on those could come by January or February. Dilger declined to provide any details about those arguments, preferring to wait until later in the process, which will take place by document filing and not require any in-person hearings.

The state also believes that the NRC has sufficient funding to hear the state’s arguments without the need for any new federal appropriation.

The timing of the state’s move was contingent on Senate confirmation in August of two Biden nominees to the NRC, which gave the agency a full complement of five commissioners for the first time since January 2021.

Among the two nominees was Bradley Crowell, who previously served as the director of the Nevada Department of Conservation and Natural Resources. Crowell, a Democrat on the NRC,  was first appointed in 2016 by former Gov. Brian Sandoval, a Republican, and was reappointed by Sisolak, a Democrat, in 2019.

Dilger said the state wants to be part of the solution and can do that by ending the Yucca licensing process and helping impart lessons from an unsuccessful experiment that saw the nation foist the matter on Nevada.

“[T]he fact of the matter is that we're trying to do something here to move the dial on this in a positive direction,” Dilger said. “Nevada wants to be part of the solution. We understand how not to build a repository… We know all about how not to do it.”

One key factor that could help future efforts to site a repository is ensuring buy-in from the state rather than just the localities.

There needs to be “a level of trust and confidence between whatever agency is managing this waste and the state,” Dilger said.

Nevada’s relationship with the DOE has been strained by the Yucca project and other flash points, including the accidental shipment of low-level nuclear waste to the state, which came to light in 2019, and the secret shipment of plutonium to Nevada, also disclosed in 2019. The plutonium has been removed under an agreement brokered by Sen. Catherine Cortez Masto (D-NV) and DOE.

The tense relationship was referenced in a letter dated Tuesday, which was organized by Rep. Dina Titus (D-NV) and signed by Rep. Susie Lee (D-NV) and Rep. Steven Horsford (D-NV), to NRC Chairman Christopher Hanson seeking “fair and full consideration of the State of Nevada’s motion so that our State may have its voice heard in this process.”

While Dilger kept his cards close to his vest about the arguments the state would make, opponents, including Sisolak and all Democrats of the congressional delegation, have long argued that burying the waste at Yucca would threaten the state's groundwater. The contamination would stem from the porous volcanic rock at Yucca, allowing water to reach and corrode the casks housing the waste.

The state has also cited seismic activity at Yucca, which could damage the casks and the risk posed by the waste transportation to Nevada to communities along the route, not just in the Silver State.

These arguments are part of a new anti-Yucca website the state unveiled Tuesday. The state also said that since the 1987 law, more seismic research showed that Yucca is part of a primary fault zone, known as the Walker Lane, which geologists predict will become the tectonic plate margin between the Pacific and North American plates.

Las Vegas has also grown since 1987 and its northern edge now lies about 65 miles from Yucca. The website also noted that Creech Air Force Base, which trains drone pilots, was not in its current form in 1987 and that the repository would threaten Air Force readiness.

Even if Nevada is successful, the state still needs congressional action to remove Yucca as the official site.

But efforts to pass such a bill have stalled. A measure titled Nuclear Waste Administration Act (NWAA) of 2019 includes language that would implement a consent-based process for future consolidated waste storage facilities. But that consent requirement is not extended to Nevada.

Cortez Masto has been working with bill sponsor Sen. Lisa Murkowski (R-AK) to add language to give Nevada veto power over the project. Still, Yucca proponents, like Rep. Jerry McNerney (D-CA), have shown no sign of allowing that.

In 2021, Cortez Masto introduced legislation requiring consent from state, local and tribal governments to construct a national nuclear waste repository, including at Yucca Mountain. Titus introduced the House version. She first introduced the bill in 2015 with former Senate Majority Leader Harry Reid (D-NV). Jacky Rosen (D-NV), Horsford and Lee, who all have pledged to block the project, co-sponsored the Senate and House measures, respectively. But those bills have not been considered since their introduction.

Before Biden's opposition to Yucca, former President Donald Trump flipped on the issue ahead of his re-election bid in 2020, reflecting an understanding of the issue's relative importance in the state. But he lost Nevada by two points. His fiscal year 2021 budget included no funds for the project, but his first three spending blueprints did.

The delegation last managed to fend off a scare in 2019, when House Republicans on the Appropriations Committee pushed to add $74 million to a must-pass spending bill to restart the process of licensing the project.

The amendment was narrowly defeated 27 to 25 after Nevada members pushed to win over their Democratic colleagues on the panel.

Horsford, at the time just a member of the Congressional Black Caucus (CBC), lobbied his fellow CBC members who also served on the spending panel, including Rep. Sanford Bishop of Georgia. Horsford is now the second-in-command at the CBC.

Titus, who is close to Speaker Nancy Pelosi, enlisted her support. Historically, Pelosi had opposed the Yucca project, going back to when Reid, who retired in 2016, led the delegation's fight against the project.

Nevada Republican Rep. Mark Amodei also played a key role. He serves on the spending panel and his vote was unknown until he cast it. He was the only Republican on the committee to oppose the GOP-written amendment. Amodei supports continued funding to study Yucca but indicated that the state would need some compensation for the GOP to win his vote to advance the project formally.

The project's demise is part of Reid's considerable legacy.

It was Reid who convinced President Barack Obama to kill the project. Obama’s DOD tried to withdraw the licensing of the project in 2010, a watershed moment for Yucca, which helped him and the delegation block any federal funding for the repository since 2011. The NRC eventually ended up suspending the licensing because of a lack of funds.

Reid, who passed away last year, had always maintained that the process by which Nevada was tagged for nuclear waste was political, often citing the lack of seniority of the delegation when the colloquially named Screw Nevada bill was passed.

people of Nevada should bring a blush of shame to the face of every member of Congress who has supported this nuclear waste legislation,” Reid said on the Senate floor in a December 1987 speech.

The sentiment was echoed more than 30 years later at a 2019 hearing by Cortez Masto, who said the 1987 law designating Yucca Mountain was designed as "an end run around the science, [establishing] consensus and public participation and was created intentionally to disregard Nevada at the expense of other states."