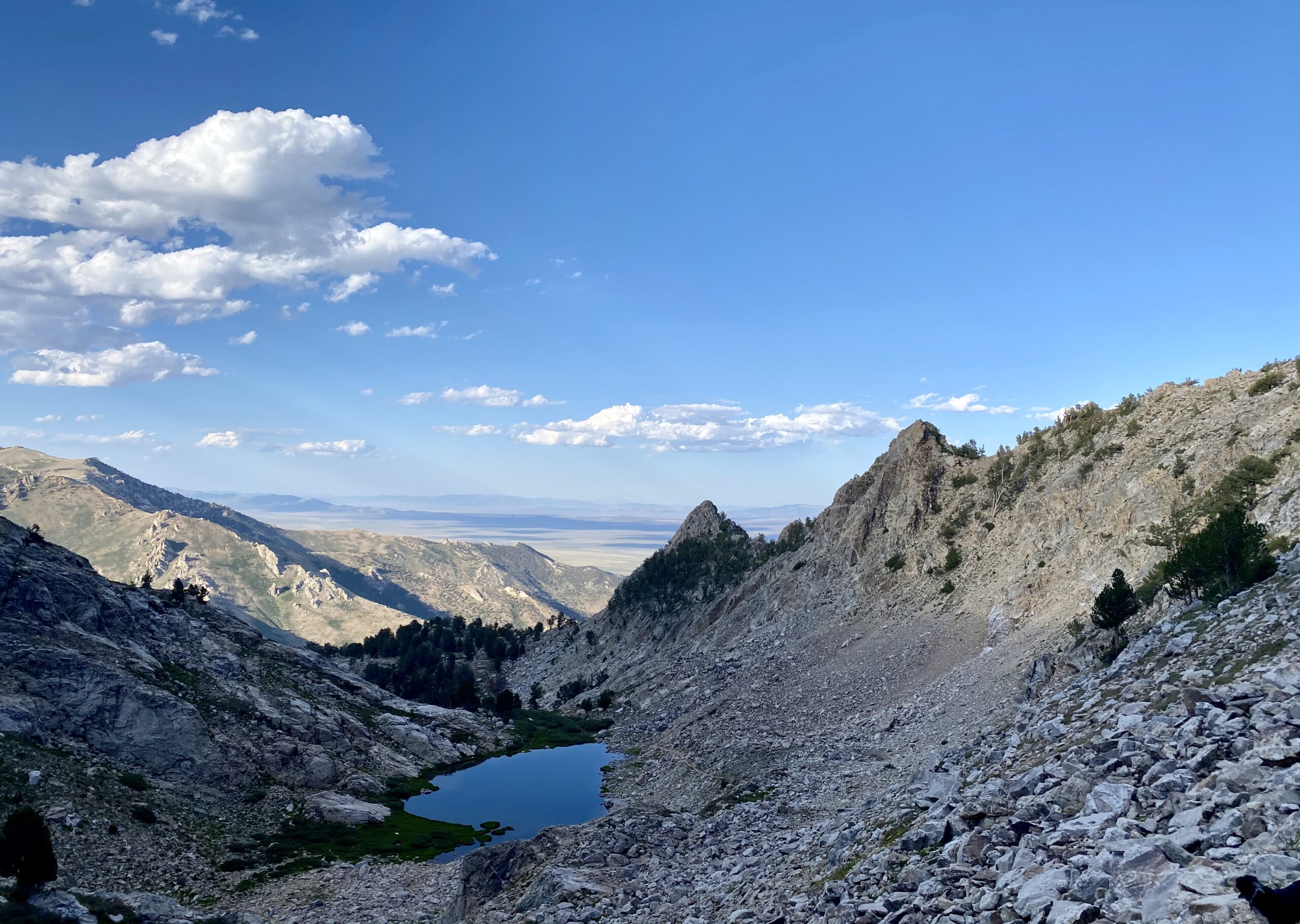 The federal government manages about 85 percent of Nevada’s land. One agency alone, the U.S. Bureau of Land Management, oversees about 67 percent of land within Nevada’s borders.

This land, public land, is used for many purposes, and it belongs to the American people.

We hear a lot (though probably not enough) about public land, and for good reason. Decisions made on public land have lasting effects on the way large swaths of the state, and the country, are managed, developed or conserved. Public lands can be a tool for conservation, but they have also, at times, enabled the cheap exploitation and monopolization of natural resources.

Federal agencies play a major role in how these lands are managed, and oftentimes they are given challenging (if not altogether conflicting) missions. The Bureau of Land Management, for instance, is charged with permitting mines, approving energy developments, allocating grazing allotments and selling or exchanging public land for urban growth or economic development.

At the same time, the same federal agency is responsible for weighing other public land values — wildlife habitat, recreation opportunities, conservation and the protection of cultural spaces — against some of the many uses listed above. This conflict is often at the center of public land debates. And how the agency balances its role can vary from federal administration to administration, from state to state, even from local district office to local district office.

But in general, public lands policy for the past century has shifted toward a greater focus on conservation. At least this is the argument that John Leshy, a UC Hastings law professor and former Department of Interior lawyer, argues in a new book, On Common Ground: A History of America's Public Lands. The book focuses on how the American public — and leaders across political parties in the 20th century — came to favor the protection of public land after the 1800s saw a torrent of free-for-all development with often damaging consequences.

The book tracks how public lands preservation, in addition to public lands development, became an increasingly popular idea for the American public and was eventually codified into law.

Last week, I interviewed Leshy more about this shift, what motivated it and what it means for the future of public lands. I’ve annotated and edited down our conversation for length and clarity.

The dynamics that drove the shift toward conserving public land: Leshy said one of the major driving forces had a lot to do with the economy of the late 1800s and early 1900s.

“One of the major dynamics was there was sort of a reaction to the Gilded Age, to the post-Civil War [attitude of] ‘let's industrialize, let's build railroads and let's turn people loose and give them what they want in terms of land and all of that,” Leshy said. “There was a big backlash to that, [which] developed in the 1870s, 1880s. And that had a very powerful influence. I talk about Henry George, a political economist who basically says ‘If we’re not careful, the ultra-rich are going to end up owning all these lands and excluding common people.’ And that resonated.”

But there was another big factor that played a role in protecting land, Leshy said. That had a lot to do with water. Leshy said there was an increasing acknowledgment of the connection between forests and watershed health. This was especially true throughout the West.

“The concern about water,” Leshy said, “was a concern that we've got to preserve the upper watersheds, because they're our water supply, and we're living in a water scarcity environment. Once that idea took hold, which it did in the 1880s, then quite quickly, in the next 20 years, Congress authorized the president to set aside forest reserves. And presidents, Republicans and Democrats, set aside 150 million acres, not quite overnight, but it was very quick.”

There was more to it, though. I asked Leshy about the connection here, at the same time, with the federal government’s desire to promote agricultural (and later urban) economies in the West. As presidents were protecting all this land, the idea of the Bureau of Reclamation was coming into focus, an agency to build dams and canals that manipulated watersheds.

Although there was this shift to conservation, there was also this desire for development.

“It was a giant tradeoff,” he said. “[President] Theodore Roosevelt saw the brilliance of this, because he understood that protecting the watersheds was very powerful, so he, like his immediate predecessors, set aside lots of land and forest reserves. But he also understood, OK, there’s kind of a payback here. We’re going to set aside to protect these lands, but we also should put the federal government in the business of building water projects so we can capture and deliver some of that water to people downstream for small farms and that sort of thing.”

Reconciling the legacy of public lands policy as an outgrowth of brutal, violent Western settlement: Many of the public lands, conserved and protected today as national monuments or wilderness areas, are the ancestral homelands of Indgienous people who were often brutally forced off their land. In many cases, Native American tribes were neither fairly compensated when the United States took title, nor did the federal government meet its treaty requirements to sovereign tribal nations after treaties were signed. Conserved land, even institutions such as national parks (seen by most Americans as wholly positive) are an outgrowth of this legacy.

In recent years, there have been efforts to repatriate lands, including national parks, incorporate more Indigenous knowledge in public lands management and address environmental injustices.

Leshy has a chapter about that in his book, and I asked him specifically about how public lands policy has engaged with this history. He said there have been efforts in recent decades and  pointed to the appointment of Interior Secretary Deb Haaland, a member of the Pueblo of Laguna and the first Native American cabinet secretary, as an important moment.

“A lot has happened, actually,” he said. “That chapter is pretty long in recounting how, in modern times, Congress and the executive branch has addressed these issues. That has a rich history.”

Leshy identifies a pivotal moment in 1975, when conservationists were looking to expand Grand Canyon National Park, the creation of which pushed the Havasupai tribe and 10 other tribes off their traditional lands. At the same time, the Havasupai Tribe wanted to expand their reservation into that same area as the proposed park expansion. Congress, Leshy said, ultimately sided with the Havasupai Tribe, against some of the wishes of the conservation groups at the time.

“The Sierra Club had led the fight, really, against enlarging the Havasupai reservation, but in the end, acquiesced to it, and I think, learned from that,” Leshy said of the Grand Canyon example.

As another example, he pointed to a bipartisan bill to transfer management of the National Bison Range in Montana to the Confederated Salish and Kootenai Tribes.

But some of the laws that were adopted had a significant impact on what voices were heard in discussions about public land management and what values were prioritized when deciding how to manage land. One law was the National Environmental Policy Act, known as NEPA, which requires the federal government do an environmental review before taking an action. Another was the Endangered Species Act, which is considered one of the strongest environmental laws on the books and aims to protect habitat for threatened species.

“It kind of bridges the two,” he said. “The Endangered Species Act, a lot of it is concerned about habitat, because that is where the species live. That means it has a big impact on land use.”

It’s important in today’s context, too, as Leshy identified two challenges facing public lands: Climate change and biodiversity. He said public lands can be part of the solution to both. Public lands provide a space, he said, for renewable energy development, where it is appropriate. And they also are important for conserving land to help protect habitats. The lesson he sees in public land policy, at its best, is prioritizing collective action over self-interest.

“One of my favorite lines is ‘the Stone Age did not end because the world ran out of stone. The Stone Age ended, because we figured out a better way to do things,’” he said.

Pushback on solar tariffs: Sen Jacky Rosen (D-NV) and David Bobzien, Gov. Steve Sisolak’s director of energy, called for repealing solar tariffs at a press conference Wednesday. Last week, Rosen introduced legislation that would repeal the tariffs, enacted by the Trump administration and renewed by the Biden administration earlier this year (with an important exemption).

Nevada Independent reporter Jazmin Orozco Rodriguez wrote a fantastic piece about Autumn Harry, the first Paiute woman licensed as a fly-fishing guide at Pyramid Lake. “I really want to talk to people about the history of Derby Dam, how our water was stolen, that our lake level dropped by 80 feet and there was a local extinction event here with the trout,” Harry said in an interview. “I want it to be more than just fishing for them.” Check out Jazmin’s story.

Supreme Court weighs in on Southwest Gas rate regulations: The Nevada Supreme Court, in a unanimous order last week, ruled that the onus is on Southwest Gas — and other utilities — to prove that their costs, typically recovered in rates, are prudent. The Supreme Court rejected arguments that there exists a “presumption of prudence” in certain cases. More on that here.

President Joe Biden held a press conference this week to discuss the administration’s strategy on permitting new mines as it pushes to secure a domestic supply of critical minerals, including lithium. A few Nevada companies, including Redwood Materials (based in Carson City) were mentioned in a press release. Reuters reporters Ernest Scheyder and Steve Holland wrote more about it, including how the administration plans to view projects.

The northeastern Nevada mining community is mourning the tragic loss of an underground miner at Cortez Hills on Feb. 14. The mine is operated by Nevada Gold Mines, a joint-venture between Barrick and Newmont. The Mine Safety and Health Administration is investigating the fatality and expected to release its preliminary report on the incident in the coming weeks.

After the 9th Circuit Court of Appeals cleared the way for construction to begin on a geothermal plant in Churchill County’s Dixie Meadows, the Center for Biological Diversity announced this week that it had reached an agreement with the U.S. Fish and Wildlife Service that requires the agency to decide whether a rare toad, which relies on the meadows for habitat, warrants federal protection. The center’s Great Basin director, Patrick Donnelly, said “Dixie Valley toads are facing extinction if this plant is built, and federal protections are these animals’ only hope.” The Nevada Current’s Jeniffer Solis has more on the agreement.

Much-needed snow in Northern Nevada this week, The Reno Gazette Journal’s Amy Alonzo reports. This precipitation comes after the driest January on record for the Reno area.

The Lake Tahoe Tribune reports on the legislative committee to review the Tahoe Regional Planning Agency and the Marlette Lake Water System.

The UC Davis Tahoe Environmental Research Center is partnering with Palisades Tahoe, Protect our Winters and Brand XR on a “Save our Snow” campaign.