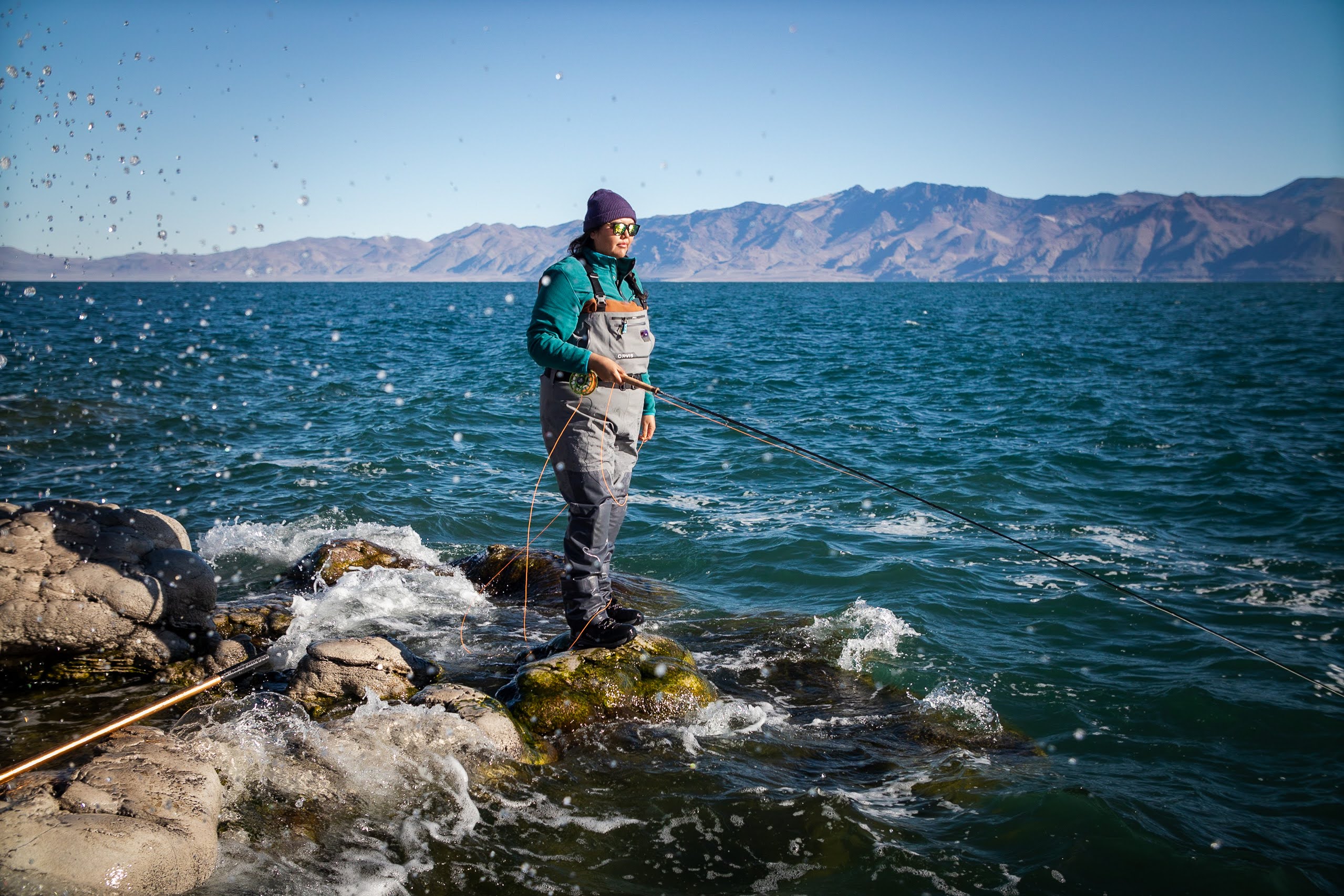 After scanning for an empty beach along Pyramid Lake’s 15 miles of shoreline on a brisk January morning, Autumn Harry settled on a spot at Warrior Point where she could cast her fishing line from the sand-colored tufa rocks.

The sun had just come up over the mountains and there wasn’t a cloud in the sky. She pulled on her waders and boots, then prepared her fishing line, her practiced fingers tying small knots and attaching a tiny glittering purple fly she made herself to bait the fish.

“It doesn’t take a big hook to catch those big fish,” she said with a smile.

Distinct from a spin rod, a fly fishing line is slightly heavier, carrying the hook through the air before it lands in the water. Harry gently swung the tall fly rod back over her shoulders, sometimes more than once, before landing it in a good spot. The wind was blowing cold and steady across the turquoise waters, called home by fish species including cutthroat trout, tui chub and cui-ui, an ancient fish found only at Pyramid Lake and the lower Truckee River.

Harry, 29, became the first Paiute woman licensed to offer guided fly fishing trips on the world-class fishing lake, known as Kooyooe Pa’a Panunadu in Paiute, after the tribal council approved her application in December. Harry said the months-long closure of the reservation, including public access to the lake, amid the spread of the coronavirus in 2020 gave her the opportunity to hone her fly fishing skills.

In an industry dominated by white men, she stands apart.

“When the lake closed down … it made me realize that, maybe even in my own homelands, I didn't always feel welcome in these spaces,” she said. “But I'm realizing that these are my homelands. I belong here. I have a lot to offer as a guide.”

She’s working to welcome more people of color and the younger members of her community to learn to fish. So far, she’s had mostly women book guided trips with her business, called Kooyooe Pa’a Guides, via Instagram. Only scheduling trips through April to focus on wrapping up her master’s thesis ahead of her UNR graduation in May, her calendar is nonetheless  already nearly booked.

This encourages her. But she said there’s a lot of work to be done to bridge the wide gender and race gaps in fly fishing.

From 2018 to 2019, the total number of fly fishing participants grew to a record 7 million people in the U.S., according to the 2020 Special Report on Fishing published by the Outdoor Foundation and the Recreational Boating and Fishing Foundation. Seventy-two percent of participants were white and 70 percent were male, making it the most male-dominated fishing category.

Only twelve percent of fly fishing participants in 2019 were Hispanic, with Asian and Black participants accounting for less than 10 percent.

In addition to her efforts to make fly fishing more accessible through her business, Harry’s also working with organizations to bring more diversity to the outdoors.

She’s an ambassador for Brown Folks Fishing, a nonprofit organization financially sponsored by the Oregon Wildlife Foundation that is focused on elevating people of color fishing, and Indigenous Women Hike, a group focused on encouraging Indigenous women’s participation in the outdoors.

Harry began fishing at age 6 when her father, Norm Harry, taught her to use a spin rod. Norm Harry was an environmental and water rights champion for the tribe. Her mother, Beverly Harry, worked in the tribe’s fisheries department, which operates a fishery restoration project. Together, her parents ensured she was well informed about the tribe’s history and its connection to Pyramid Lake’s water and fish.

“Our people here are fisher people,” she said. “We’re known as the cui-ui tucutta, which is ‘cui-ui eater.’ Those fish are really why our people are still here today.”

The importance of access to the lake’s fish was underscored early on in the pandemic, when tribal members drove 45 minutes to Reno only to find empty or sparse shelves in grocery stores. Harry began catching fish for the elders in her community so they wouldn’t need to venture out amid the uncertainty of the pandemic.

“That was a really crucial time for our people,” Harry said. “It was a reminder that we can’t really rely on … the way the current food system operates. We have to be able to come to the lake and know how to fish to get our food.”

Harry is bringing together a group of Indigenous women from the Great Basin and Owen’s River region near Bishop, California in early April for a retreat focused on learning the basics of fly fishing. They’ll visit the fisheries department to learn about the spawning efforts to maintain the trout, learn to tie flies that go on the end of the line to bait fish, learn to cast their lines (which is more technical in fly fishing) and learn to tie knots needed when preparing the fishing line.

She sees this retreat as a catalyst to increase the number of Indigenous women participating in fly fishing, but there are more barriers to overcome, including the financial costs in taking up the sport.

All it took to get her hooked on fly fishing was one lesson about four years ago, after a friend offered to teach her. Since then, she’s saved up to buy her own gear, such as waders, boots, a fly rod and reel, net and tools to tie flies.

She wants her guided trips to be as accessible as possible, so she’s also invested in extra pairs of waders and other items to provide for beginners and first-timers.

In the 2020 Special Report on Fishing, nearly half of fly fishing participants reported earning $75,000 or more annually.

Operating her own guide business gives Harry, and potentially other Indigneous women, the opportunity to build their wealth.

“There's some startup costs for sure,” she said, “but once you start booking trips, you get your money back. It's a good investment.”

When guiding non-Native clients, Harry says she tries to spread awareness about her community, the history of the lake and concerns that the rapid development in Reno and Sparks could lead to lower water levels.

Failing to acknowledge the Paiute living in the region while fishing on their shores perpetuates the erasure of Indigenous people, she said.
“I really want to talk to people about the history of Derby Dam, how our water was stolen, that our lake level dropped by 80 feet and there was a local extinction event here with the trout,” she said. “I want it to be more than just fishing for them.”