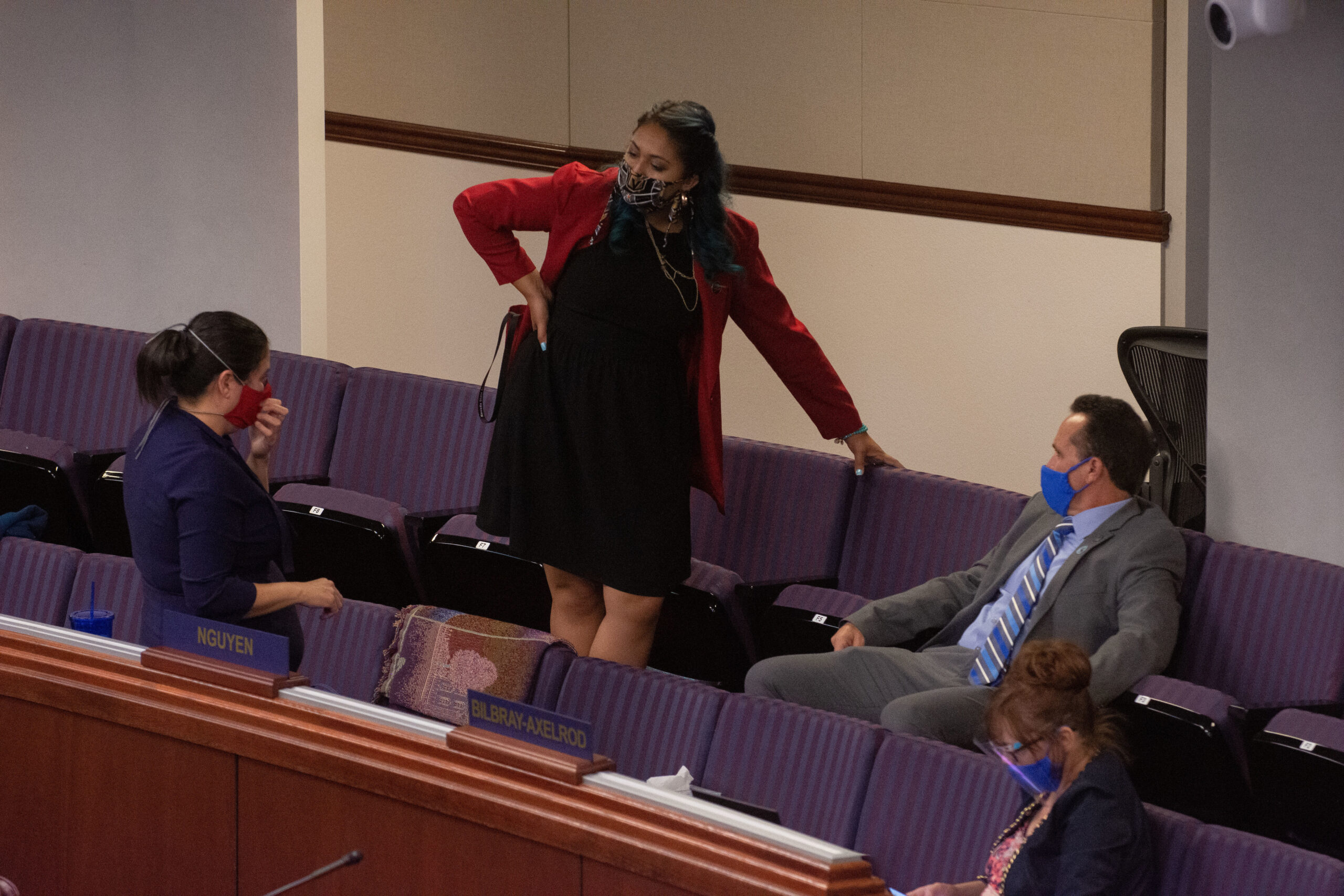 A bill that initially proposed barring much of the collaboration between federal immigration authorities and local law enforcement has survived a deadline but in a heavily watered down form, illustrating how politically dicey the issue has been even for Democratic lawmakers in session after session.

AB376, sponsored by Assemblywoman Selena Torres (D-Las Vegas), was rid of language that draws a bright line between immigration enforcement and local police in the name of rebuilding trust between police and immigrant communities. What remains is a proposed Keep Nevada Working Task Force charged with finding ways to strengthen the immigrant workforce, a call for the attorney general to develop model policies on immigration issues and half a million dollars to support deportation defense through UNLV’s Boyd School of Law.

“I think that we've got some really good work out of the amendments that we made on the legislation,” Torres said in a brief interview on Tuesday. Asked if she was disappointed about losing other provisions, she added “I think we're in a good spot.”

Erika Castro, organizing director for the Progressive Leadership Alliance of Nevada, said the provisions that have been watered down are the ones she and other immigrant advocates were excited about, adding that their priority now is to maintain what’s left of the bill in the Senate.

“And that Governor Sisolak actually signs it into law,” she added.

The bill’s transformation was one of the more dramatic ahead of Tuesday’s deadline for bills to pass out of their first house. Four bills died, and more than a dozen  — including AB376 — were re-referred to money committees, where it’s possible a lack of money to implement them could seal their fate.

Assembly Majority Leader Teresa Benitez-Thompson (D-Reno), who is listed as the sponsor of the primary amendment excising the bill’s most controversial provisions, said the proposal to send half a million dollars to the UNLV Immigration Clinic was aimed to “help our helpers who are out there in the trenches.” She said the clinic reported being unable to meet the demand for pro bono legal services for unaccompanied children and others facing deportation.

As in Washington D.C., where Congress has repeatedly failed to accomplish comprehensive immigration reform and where the issue is sometimes described as a “third rail” too controversial to meaningfully address, immigration policy has been an albatross in at least the last three Democrat-controlled sessions in Carson City.

The decades-long lack of reform, despite which political party is in power, continues to erode trust and hope among immigrants, said Castro. Some Nevada immigrants expressed a sense of optimism when President Joe Biden defeated Donald Trump last year, but skepticism remains.

“We've been waiting for a form of relief at a federal lever level for over 30 years now,” said Castro, who is a recipient of the Deferred Action for Childhood Arrivals (DACA) program. “We really need our elected officials to keep their promises that they made on the campaign trail, now that they're actually in office and have the power to be able to do something.”

In 2017, a bill to bar cooperation between law enforcement and local police died without a hearing after quickly being branded a “sanctuary bill” by Republican leaders. In 2019, lawmakers gutted a bill from Torres calling for reports about how serious the underlying crimes were for people who were arrested and ended up in deportation proceedings; the bill ultimately enacted a provision requiring jail staff to tell inmates why they are asking questions about immigration status.

Castro noted the repeated attempts to address collaboration between local law enforcement agencies and Immigration and Customs Enforcement (ICE) at the state level and said that although the most recent effort through AB376 has been watered down, it’s significant progress from previous years.

“This is the furthest that we've gotten with a piece of legislation like this,” she said. “And we're gonna continue to come back until it actually becomes a law, because I think at the end of the day, deportations are not stopping whether we have a Democratic president. So we're going to continue to bring these policies forward because our communities deserve and they need that relief.”

This session, Torres’ bill faced opposition from law enforcement and critics who again argued it would make Nevada a “sanctuary state” and repel tourists.

Assemblyman Edgar Flores (D-Las Vegas), who chairs the committee from which Torres’ bill passed in its original form a few weeks ago before being amended, acknowledged that changes to programs such as 287(g) agreements between local and federal law enforcement are difficult to explain and people are “afraid of that conversation.” In recent years, Republicans such as 2018 gubernatorial candidate Adam Laxalt have rallied around the criticism that Democrats are trying to implement sanctuary policies, and some Democrats have shied away from responding to those statements.

“I think immigration is such an intimidating topic for anybody. Doesn't matter what side of the aisle you're on,” Flores said in an interview. “And it's a very heavy lift. Because politically, it's so easy for it to be turned into something it’s not.”

For now, Castro and other immigrant advocates and organizations are focused on helping raise support to shepherd the bill all the way to Sisolak’s desk and working with state leaders to ensure that a potential fourth attempt to pass legislation such as AB376 doesn’t get stuck in the process. “Our communities have waited enough, especially with the pandemic, knowing that they were left out of any financial resources, any support,” Castro said. “Being in a state where we have the largest population of immigrants per capita, I think that puts us in a place where we really need to be intentional about how we're including and supporting our undocumented communities.”

Budget committees in the Assembly and Senate typically serve two roles — reviewing every part of the state’s executive budget, while also holding jurisdiction over any bill that includes direct spending or a potential fiscal impact to the state.

But on deadline days, those committees serve another role — lifeboats for contentious or complex bills that would otherwise sink by deadline day. That said, referrals to budget committees don’t guarantee anything, and can often be the final stop for bills with large fiscal impacts or that draw too much opposition during the session.

Here’s a look at some of the major bills that were referred to budget committees on Tuesday:

SB235 proposes a single, streamlined dispensary license in place of the current system, in which most dispensaries have both a medical and a recreational license. But a compromise from the bill’s earlier version raised further questions about whether consolidating licenses would reduce revenue.

Another bill, AB322, allows for permitting events where cannabis can be sold or consumed but could require more staff resources to process additional licenses. Another, AB341, authorizes cannabis consumption lounges, but regulators anticipate it would also require the Cannabis Compliance Board to staff up to meet the higher regulatory and enforcement workload.

SB201, sponsored by an interim committee studying prescription drug prices, would require the licensure and regulation of any pharmaceutical sales representatives. An amendment to the bill adopted Tuesday requires that any licensure funds (between $500 and $800 per year) only account for the costs of licensing and regulating the profession, or improving transparency on the price of prescription drugs, and wouldn’t revert to the state’s main budget account.

A fiscal note on the bill submitted by the Department of Health and Human Services’ Public and Behavioral Health Division estimated that it would cost the state around $250,000 every year to implement the bill and regulate the estimated 3,800 pharmaceutical sales representatives active in the state.

Another pharmaceutical drug-related measure expanding the state’s existing drug price reporting database, SB380, was similarly amended and referred to a budget committee on Tuesday. While no dollar amount was listed on a fiscal note attached to the bill by the Department of Health and Human Services, the agency wrote that the state’s current drug pricing transparency database “will not meet the requirements” of the bill.

And the bill by Assemblywoman Daniele Monroe-Moreno creating a statewide occupational licensing board for professional midwives (AB387) was similarly yanked to a budget committee after being amended on Tuesday.

The state Department of Public and Behavioral Health estimated that the agency would need around $450,000 every two-year budget cycle to hire staff to implement provisions of the original bill.

A bill by Assemblywoman Rochelle Nguyen (D-Las Vegas) aimed at decriminalizing traffic tickets — the fifth time in five sessions lawmakers have brought the concept forward — was referred to the Assembly budget committee on Tuesday, after legislators adopted a lengthy amendment.

Local governments have long argued against the bill, saying that fees and fines from traffic tickets make up a substantial portion of their annual budgets. Clark County, for example, estimated that the measure would lead to a $12.75 million annual reduction in revenue.

AB321, which would make Nevada’s expanded mail voting system in place for the 2020 election a permanent feature, carries a somewhat hefty price tag — the secretary of state’s office estimated that the measure would cost up to $17.3 million to set up for the 2022 election cycle, and $7.7 million in future election cycles.

AB126, which aims to move Nevada up the presidential preference primary calendar, was also tagged with a $5.2 million price tag from the secretary of state’s office.

By the end of the evening, only four bills actually died by Tuesday’s deadline for first house passage, withering on the proverbial vine that is the Secretary’s Desk. Three of the four failed measures (excluding SB314) would have required a two-thirds vote as they increased taxes. They included: