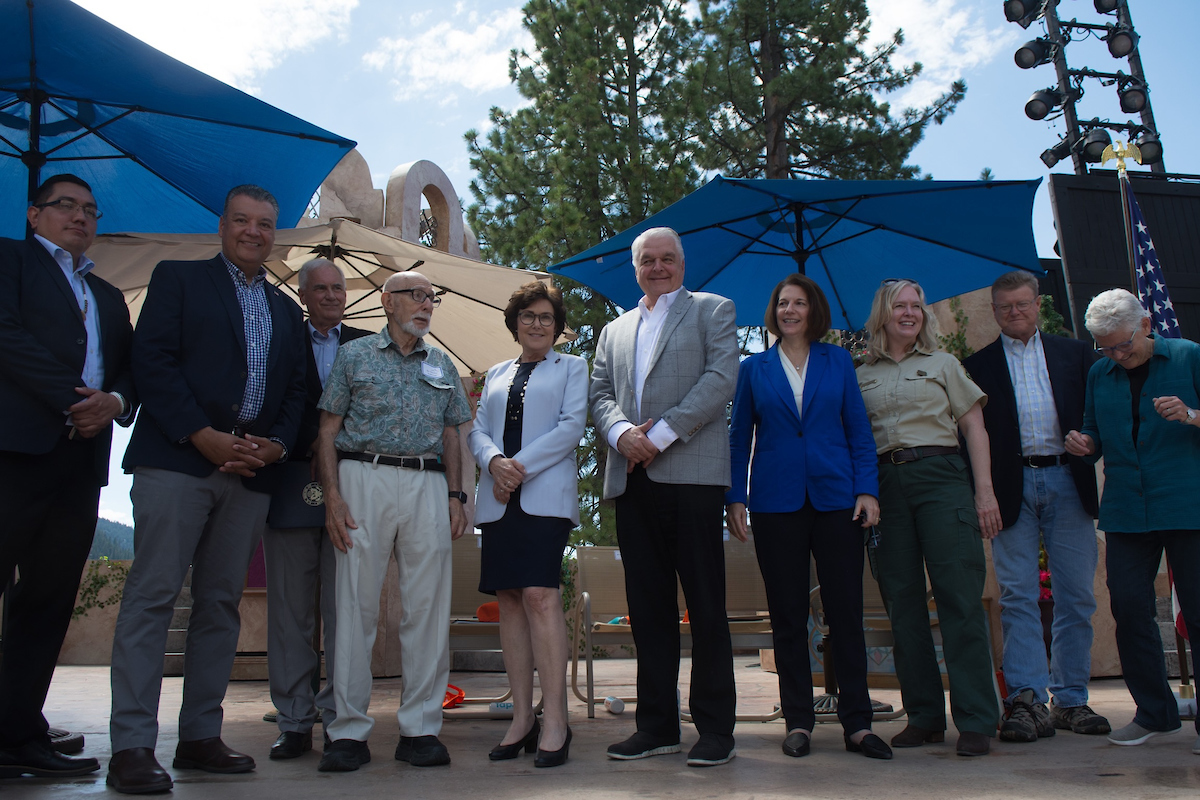 Officials gathered Tuesday on the shores of Sand Harbor State Park for the 26th Annual Lake Tahoe Summit described legislation passed since last year’s event as a major step forward in the fight to keep the lake blue and confront climate change.

The keynote speaker at the summit, White House National Climate Adviser Gina McCarthy, said she was excited about the expansion of clean energy opportunities and the decrease in emissions discussed in the Inflation Reduction Act that President Joe Biden signed the same day.

The administration’s goal, by 2030, is to cut emissions to 40 percent less than 2005 emission levels. The bill supports investments in solar and wind manufacturing within the U.S. and an expanded power grid to support the clean energy systems.

“This is an absolute game changer,” McCarthy told summit attendees, who included elected officials from Nevada and California, as well as scientists and community organizers.

The act, which also seeks to lower the cost of prescription drugs and imposes a 15 percent minimum tax on corporations that make more than $1 billion in revenue annually, in addition to putting more than $300 billion toward energy and climate reform, was one of several government efforts discussed to improve climate change.

Sen. Jacky Rosen (D-NV), who was hosting the summit this year, talked about her involvement in the Bipartisan Infrastructure Law signed into law in November, which will be providing $17 million to the Tahoe Restoration Act. That legislation, which dates back to 2000, would have expired in two years if it had not been renewed last year and provides funding for environmental conservation projects such as efforts to stop invasive species from entering the lake, wildfire prevention and reducing stormwater pollution.

Gov. Steve Sisolak also reflected on the effect the Inflation Reduction Act could have on Nevada’s water supply.

“With the aggressive climate-forward investments that are being made that are made possible by the IRA, we have the tools to move us forward,” Sisolak said in a speech. “This includes $4 billion, and resources to help states like Nevada and California that rely on the Colorado River to integrate permanent water-saving measures across the Southwest.”

Despite sparkling Lake Tahoe in the backdrop of the event, water in the southern part of the state was top of mind for attendees.

Federal water managers announced on Tuesday morning a plan to cut water allocations to Nevada, Arizona and Mexico, although Southern Nevada Water Authority General Manager John Entsminger has criticized other Colorado River water users for not doing enough to respond to the drought that has lasted 23 years and forced the cuts.

Later, in an interview with The Nevada Independent, Sisolak said that now is the time for collaboration with the states that share the Colorado River water.

“We're going to make sure that it's done fairly — that everybody has a good chance and that's what we're going to continue to do with our fellow states,” Sisolak said.

Organizers honored Dr. Charles Goldman with the Lake Tahoe Award for his work in limnology, the study of lakes. Goldman began his work monitoring Lake Tahoe’s clarity in the 1950s, becoming known as “the godfather of limnology.” Because of his monitoring beginning more than 60 years ago, Lake Tahoe’s clarity has been one of the most well-documented and led to the formation of the UC Davis Tahoe Environmental Research Center.

In his acceptance speech, Goldman discussed the dangers of warming lakes, particularly as they contribute to algae blooms and the spread of invasive species. He also expressed his gratitude for the award.

“I’m almost brought to tears,” Goldman told The Nevada Independent in an interview following the event.

While wildfire smoke didn’t shroud the event as it did last year, the threat of catastrophic blazes wasn’t far from mind for summit speakers, several of whom thanked fire crews.

Jennifer Eberlein, the Pacific Southwest regional forester for the Forest Service, noted the development of the first sawmill the area has seen for decades. The Washoe Tribe’s Washoe Development Corporation is collaborating with Tahoe Forest Products on a sawmill near Carson City to help thin out the dangerous fuel that can lead to wildfires in the Tahoe forests.

“I hope that we all continue to work together protecting sacred waters, lands, lakes  that have given us life throughout all these years. And we wouldn’t be here without our lake,” he said.