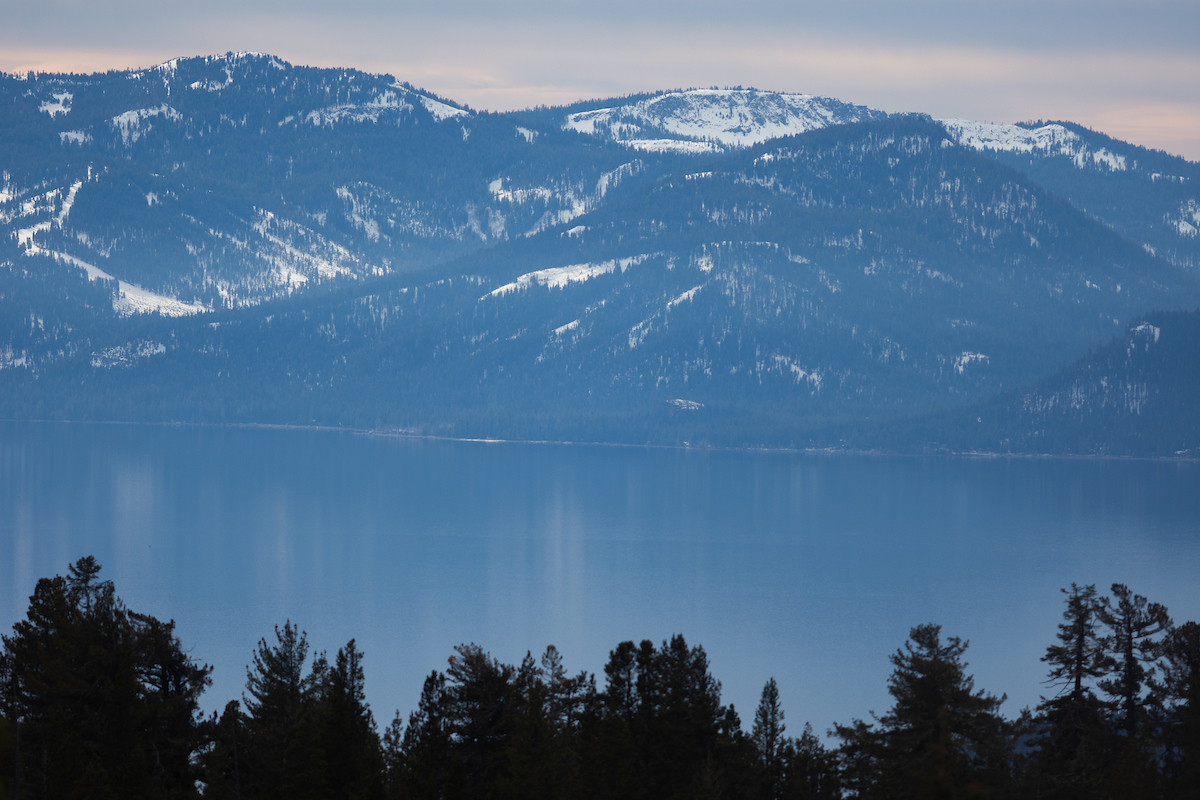 The growing threat of catastrophic wildfires blazing across the West and the resulting detrimental effects, such as hazardous air quality, were top of mind for Nevada and California leaders gathered on a slightly hazy shore Thursday morning for the 25th annual Lake Tahoe Summit.

Before speakers launched into remarks on climate change, wildfires, infrastructure and legislation aimed at preserving the popular year-round tourist destination, Washoe Tribe of Nevada and California Chairman Serrell Smokey began with a prayer.

The air quality across the Tahoe region was labeled as “moderate” on Thursday as the Caldor Fire, which is zero percent contained and has scorched more than 65,000 acres, burns less than 100 miles from the southern shore of the lake. While favorable winds provided some relief during the event, a huge plume of smoke from the fire caused the region’s air quality to plummet to hazardous levels earlier this week.

“We know that fires and drought and sky-high temperatures are already taking a toll on Lake Tahoe’s people and their plants and their animals,” said Sen. Catherine Cortez Masto (D-NV).

Elected officials offered solutions against the backdrop of discouraging trends for the lake during the annual event that brings together bistate leadership to collaborate on preservation efforts.

According to the 2021 State of the Lake report published by the Tahoe Environmental Research Center, the region’s annual average temperature increased by more than 3 degrees last year to 58 degrees. The area saw diminished snowpack and increased rain, with annual precipitation below average at 20 inches. Snow made up less than 50 percent of the precipitation average last year.

The precipitation data shows a break in a prior four-year trend of average or above-average levels.

As a result, the lake’s water levels fell by two feet last year. In the report, researchers said it’s likely that the lake will fall below its natural rim for the first time in a decade by October, at which point the water will stop flowing to the Truckee River. The river delivers 80 percent of all drinking water to Reno and Sparks residents and is the main water source for Pyramid Lake.

“It’s easy to get overwhelmed by the evidence of climate change all around us,” Cortez Masto said, “but standing here today, we can also see clear reasons for hope.”

Sisolak, Cortez Masto and Sen. Jacky Rosen (D-NV) highlighted the $1.2 trillion infrastructure bill, recently approved by the Senate and awaiting a vote in the House, focused on roads, transit, airports and broadband, plus other legislation that provides funding for programs aimed at preserving the Tahoe region.

Rosen said the funding from the infrastructure bill will help address road and trail repairs, “making [Tahoe] more accessible for everybody.”

In addition to the environmental protection programs, the measure requires coordination between federal, state, local and private groups, including the Environmental Protection Agency (EPA) and the Tahoe Regional Planning Agency.

The original bill was approved in 2000, authorizing $300 million in federal funds for a decade-long effort to clean up the lake. The legislation expired in 2010 and wasn’t reauthorized until 2016.

The effort to extend the legislation is widely supported by public and private Tahoe groups, such as the regional planning agency and the League to Save Lake Tahoe, and all six members of Nevada’s congressional delegation.

Interior Secretary Deb Haaland, the keynote speaker at the summit, pointed to the Biden administration’s “30 by 30” goal to restore and conserve 30 percent of U.S. land and ocean by 2030.

“It’s a vision that recognizes that nature offers some of the most cost-effective ways to address the climate crisis that we need to do to stem the steep loss of nature and wildlife,” said Haaland, who is an enrolled member of the Laguna Pueblo Tribe in New Mexico. “And that we need to address the inequitable access to the outdoors for communities of color.”

Haaland, one of the first Native American women elected to Congress and the first to serve as a U.S. cabinet secretary, said the initiative supports ranchers, farmers and private landowners while honoring the sovereignty of tribes and elevating Indigenous-led conservation efforts.

Nevada lawmakers also approved a “30 by 30” resolution during this year’s legislative session.

The cabinet secretary added that the Department of Interior is taking steps to hire more firefighters and convert more than 500 seasonal firefighters into permanent career positions this year. The Biden administration also announced earlier this week that federal firefighters will receive a pay raise starting next week.

Many of the state leaders who spoke during the summit pointed to the future, prompting listeners to think about the state of the Tahoe region in 25 years.

Rep. John Garamendi (D-CA) compared the lake to a scrapbook that keeps records of human and geological activity.

“What will the lake record of us?” he said. “Failure is an option. This lake will record the highest temperatures … and then literally the destruction of this lake … if we fail to have the courage to step forward.”

While all-time high tourism levels boost the $5 billion Tahoe economy, it also increases trash, pollution and at times overwhelms local infrastructure. A 2018 study for the Tahoe Prosperity Center reported that the region sees as many as 24 million visitors each year.

Lake clarity, which is used as a factor to determine the health of the lake, decreases during the peak tourism months, according to researchers.

Measured by the depth at which a white disk can be seen, clarity levels were best in February 2020 at 80 feet and least clear in May at 50 feet. When researchers from UC Davis first began monitoring clarity levels in 1968, the white disk could be seen at 102 feet deep. The clarity restoration target is 97.4 feet.

As Tahoe continues to face abundant environmental threats caused by climate change and increased tourism, leaders at the summit urged one another to do more to protect the lake.

Summit host Sen. Alex Padilla (D-CA) said he visited the region with his children in 2017, emphasizing the opportunity and obligation to ensure visiting the region will be possible for the next 25 years and beyond.

“But scientists and environmental experts continue to remind us that our window to do so is closing,” Padilla said. “Time is of the essence.”