Behind the Bar: Can the CCEA tax petitions be withdrawn? Plus removing barriers for undocumented student scholarships, banning declawing cats and bills to watch this week 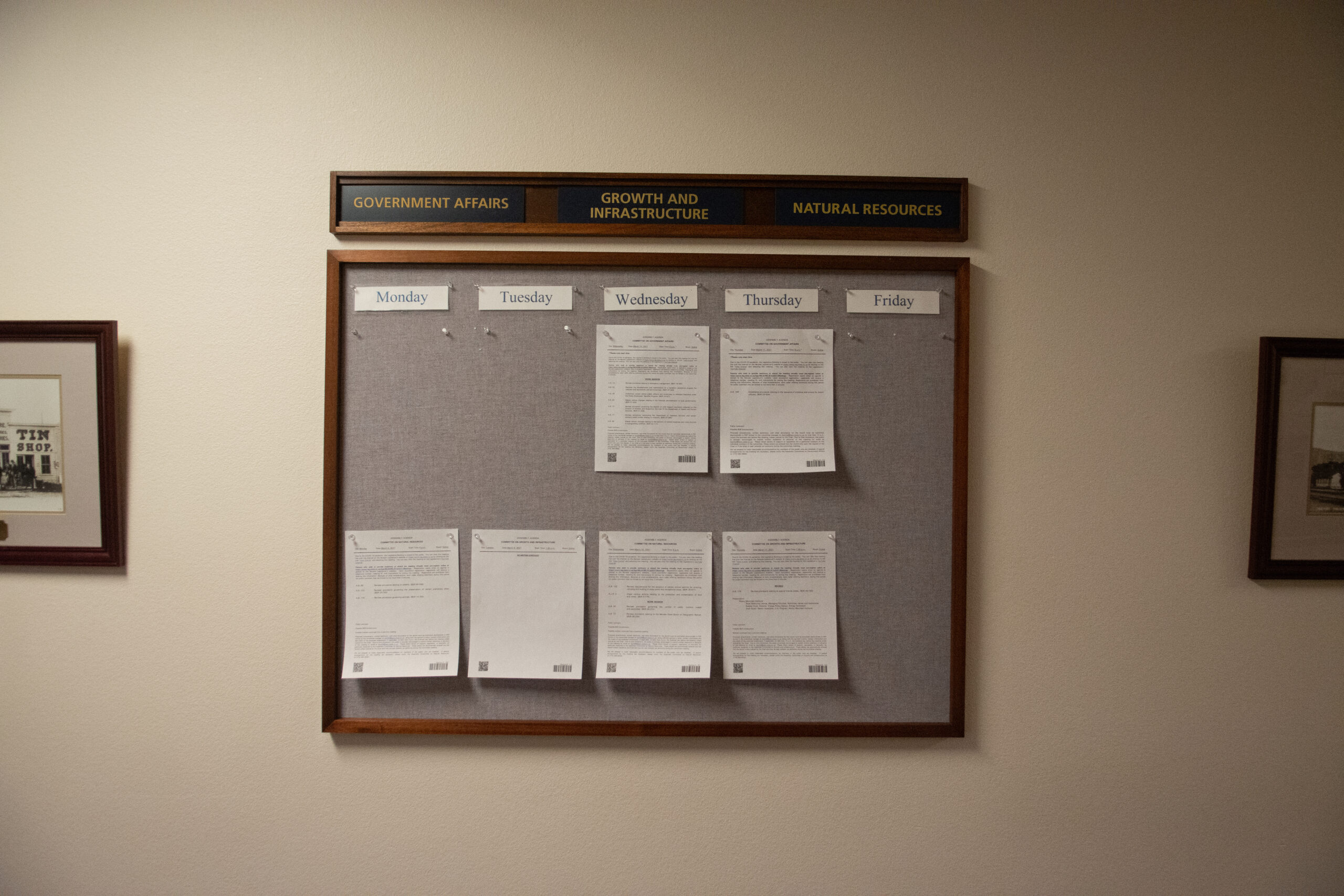 In this edition: Can initiative petitions be withdrawn at this point? Plus, details on the bill expanding scholarships to undocumented students, bills to watch this week, and claws coming out on the bill banning declawing of cats.

I want to hear from you! Questions, comments, observations, jokes, what you think we should be covering or paying attention to. Email me at [email protected].

Friday marked the 40th day of the session, which was the constitutional deadline for Legislature to take action on the initiative petitions (raising the state’s gaming and sales tax to help fund K-12 education). Members of the Assembly voted Friday to move both petitions to the legislative graveyard that is the Chief Clerk’s Desk; members of the Senate held a similar vote on Thursday.

The fate of the two petitions in the Legislature has essentially been set since at least January, when Democratic leaders said during a virtual discussion panel (hosted by The Nevada Independent) that they didn’t plan to support the measures.

The decision didn’t take CCEA by surprise, either. Union leaders told us explicitly (and have made it public elsewhere) that they aren’t “wed” to the initiatives if legislators come up with a suitable alternative funding structure for K-12 education, in which case they would withdraw the initiatives.

But there’s another wrinkle — questions are now starting to trickle out as to whether the union can actually withdraw the petitions, now that they’ve collected signatures and been submitted to the Legislature.

Part of the issue stems from the fact that there isn’t much legal guidance as to when backers of an initiative petition can back out and stop a petition from heading to the ballot.

Formal authority to withdraw petitions was only added to state law in 2017, as part of a wide-ranging “clean-up bill” sponsored by the secretary of state’s office. Review the legislative history, and it’s clear that little discussion on the bill (which also required a cash-on-hand total in campaign finance reporting and also changed several other election administration guidelines) was dedicated to the section of allowing initiative petitions to be withdrawn.

The only discussion related to the matter dealt with concerns about groups re-filing petitions if they were legally challenged and a judge ordered changes to the language. But there’s nothing in the record contemplating or discussing the concept of withdrawing a petition after signatures have been gathered and it's been transmitted to the Legislature — the only questions on the law change seemed to focus on legal challenges filed against an initiative prior to signature collection, not post-submittal to the Legislature.

The language on petition withdrawals is broad and doesn’t contain a time limit on when an authorized person could request a petition be withdrawn.

This is uncharted legal territory — can backers of an initiative petition that qualifies for the ballot request withdrawal right up to the point ballots are printed? What about during the 40-day window where legislators have to consider it? When, if at all, are these initiatives out of the hands of their backers?

CCEA clearly believes that they have the right to withdraw these petitions at this point in time. And they might be correct! (For the second time in two newsletters, let me advise that I’m not an attorney.)

But it wouldn’t surprise me at all if questions over the legality of withdrawing the petitions at this point in the process comes up at some point between now and the end of session. In theory, it’s a huge piece of leverage for the union — play ball, or you’ll be on a midterm ballot with up to three (if you include mining) tax measures. As CCEA Executive Director John Vellardita put it, “The governor should be concerned, that's for sure.”

But this whole discussion about revenue starts with the question of whether the initiatives can be taken off the ballot — or whether the train has left the station, and there’s no slowing it down now.

In an era when protections for immigrant communities fluctuate with changes in political administrations, Assemblyman Edgar Flores (D-Las Vegas) is hoping to guarantee higher educational opportunities for all students, regardless of citizenship status.

Nevada allows DACA recipients and TPS (Temporary Protected Status) holders to receive in-state tuition and apply for state-supported scholarships, Flores said, but those guidelines are not set in stone.

AB213 would change that.

Introduced on Tuesday, the bill would remove citizenship requirements for higher education scholarship programs and secure access to in-state tuition for any graduate of a Nevada high school.

"During this pandemic, we've had very vulnerable populations not have access to certain things, even though they were essential workers that were deemed critical," Flores told The Nevada Independent. "We have all these barriers for them, including our students. So I think this was a time for us to come as a state collectively and say, we recognize you, we see you, and we're going to codify this to ensure that you're protected."

The state's policy of requiring at least one year living in Nevada in order to qualify for in-state tuition could be detrimental for Native students who temporarily left or attended school out of state only to decide to come back, Flores said.

"[Access is] really the essence of the bill," Flores said. "It's just us sending a real strong message. We just came out of a very, very difficult pandemic, we're still in it, technically ... and I think right now we kind of need to set our priorities very straight."

Even with the Legislature’s first major bill introduction deadline of the session coming Monday, lawmakers have set a busy schedule of bill hearings for the seventh week of the session — covering topics including taxing electric vehicle charging, raising marriage license fees, creating a small business advocacy office and more reporting on police killings.

Below, we’ve listed the hearing times and short descriptions for those high-profile measures. They’re accurate as of Sunday afternoon, but are subject to change at any time (given that the Legislature is exempted from Open Meeting Law). For links and times to watch committee meetings, check out the Legislature’s website.

Here’s what to watch this week in the Legislature:

Monday, 10 a.m. - The Assembly Government Affairs committee reviews AB184, which would create the Office of Small Business Advocacy within the Office of the Lieutenant Governor. A similar bill was introduced in 2019, but fizzled out in the Assembly after passing the Senate on the last day of the session.

Monday, 3:30 p.m. - Members of the Senate Growth and Infrastructure committee will take a look at SB191, a bill by Senate Minority Leader James Settelmeyer (R-Minden) that would require the state to collect a 10 percent surcharge on electricity used to charge electric vehicles in the state.

Tuesday, 8 a.m. - Assembly Judiciary Committee contemplates AB58, which requires police agencies to report to the attorney general within 72 hours when an officer kills or seriously injures a person and authorizes the attorney general to assign a monitor to oversee the investigation.

Tuesday, 1 p.m. - The Senate Judiciary Committee vets SB177, sponsored by Sen. Julia Ratti (D-Sparks), which raises from $25 to $50 the portion of fees on a marriage license that go to domestic violence programs.

Thursday, 1 p.m. - The Senate Judiciary Committee reviews SB144, a bill sponsored by Sen. Pat Spearman (D-North Las Vegas) requiring HOAs to have a website and report annually on the demographics of people who they are sending to collections.

Nevada could become second state to ban declawing of cats

Assemblywoman Susie Martinez (D-Las Vegas) isn’t really a cat person. Her daughter is allergic — something she found out while visiting her sister, a cat owner, and her daughter’s eyes got so swollen she “looked like Rocky (Balboa).”

But Martinez is nonetheless poised to become the 2021 session’s feline flag-bearer with her introduction of AB209, a bill that would generally outlaw the declawing of cats, except for medically necessary reasons.

In an interview, Martinez said declawing was an inhumane and cruel practice — amputating the last bone on each of a cat’s toes, which for humans would be the equivalent of cutting off a finger to the first knuckle.

“It's such an archaic process, what it does to them mentally, and then how they can have damage in their little paws, you know, they'll have pain for the rest of their life,” she said.

Nevada wouldn’t be the fur-st state to ban declawing; New York enacted a similar ban on declawing cats in 2019, following several cities in the U.S. and nearly four dozen other countries that have outlawed the purr-actice. Supporters of declawing bans estimate that up to a quarter or more of cats in the U.S. have undergone the procedure.

The bill would generally prohibit the declawing of cats, unless needed for medical purposes, with an escalating penalty for violators starting at $1,000 — quite a bit of scratch.

The other section prohibits veterinarians from unlawfully declawing a cat, imposing a civil penalty and various actions that the State Board of Veterinary Medical Examiners can take against violators.

Supporters of the bill might hiss at a fiscal note submitted by the veterinary board, which estimates a $9,000 up-front cost and around $16,000 in costs over future budget cycles to establish a new tracking system, as well as ongoing training and investigations costs.

Martinez said her niece is currently living at her home in Las Vegas while she lives in Carson City, and has brought along her three cats — Chico, Maple (or ‘Meeps’) and Maisie. She said the three cats are getting along fine with the original tenants; her three dogs.

“They've been fine in my house,” she said. “I've got all kinds of brand new furniture. They've been doing fine. You know, you just clip their nails. You teach them to be a little civilized. And they will be okay.”

The second installment in the “What Happened Here” COVID retrospective.

Jazmin Orozco Rodriguez’s reporting on efforts to vaccinate tribal members, and her obituaries of four Nevadans who died from COVID complications.

Michelle Rindels digs into the details on the plan from Senate Republicans to fix DETR.

Nevada’s election system could take a cue from bro-country star Morgan Wallen and transition from a bottom up into an “Up-Down” system (via Jannelle Calderon).

Just as everyone predicted, the issue that will finally set politics aside and bring everyone back to the table is the proposal to pay inmates the minimum wage (via Sean Golonka).

And in another shocker, lawmakers are pretty pleased that the state and local governments are getting $4.1 billion from the federal stimulus package.

The governor got the Fauci ouchie, via Sean Golonka.

Nevada is not on track to meet its zero-carbon clean energy goals (Nevada Current).

Some charter schools are opposing a bill that would require them to only hire licensed teachers (Nevada Current).

“Sen. Pete Goicoechea, R-Eureka, said a change (to daylight savings time) could hurt some ranchers and farmers in rural Nevada because ‘the cows don’t know that next Sunday the time’s changed, or this fall. It throws everything off.’” (Las Vegas Sun)