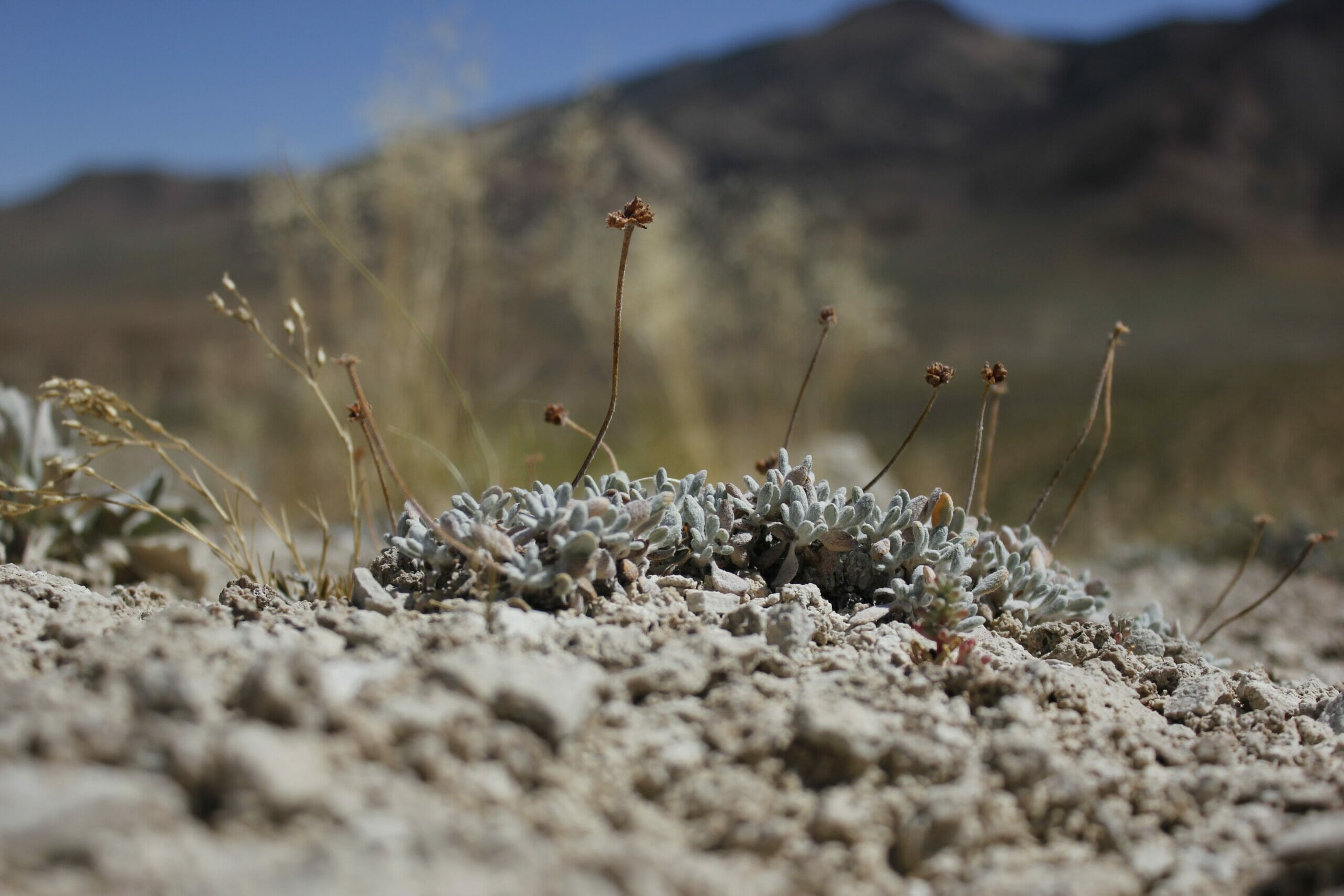 When its flowers are not in bloom, the Tiehm’s buckwheat is an inconspicuous desert resident. Its stem protrudes from a humble base with small green leaves fanning out in a circle. Even in the harsh landscape of remote Western Nevada, these plants stick with each other. Scattered on grayish outcrops, the plants clump next to one another no more than a finger’s length apart.

“This plant already lives on the edge,” says Naomi Fraga, a California botanist during a recent survey of the plant in the Silver Peak Range near Tonopah. “It's in a very precarious situation."

The plant’s range is small. It occupies about 10 acres of the state’s 70.3 million-acre land mass. But it’s on valuable land. Below the soil is lithium, and an Australian firm is looking to extract it.

Depending on how a future mine is developed, it could jeopardize the existence of the species, the Center for Biological Diversity argued in a recent petition asking the U.S. Fish and Wildlife Service to protect the buckwheat under the Endangered Species Act. Even if the mine is not developed, the group argued that exploration is already threatening the species. It’s one reason why, in addition to seeking federal protections, the group is asking the state to take action.

The petition reflects a growing tension in the region, one that has some environmentalists torn. Lithium is a foundational material for producing the batteries and electric cars most experts say are necessary — in large quantities — to transition from a carbon-intense economy and prevent the worst effects of climate change. Electric vehicles are driving more interest in lithium mining, said Emily Hersh, a consultant focused on the mineral as a managing partner for DCDB Group.

“We as a society need to make a decision whether we want to burn hydrocarbons or something that will allow us to use solar energy to power our transportation,” Hersh said. “If it’s the latter, lithium is part of that.”

In some cases, that push can clash with other conservation efforts. A similar dynamic is playing out only a few hundred miles southwest at the edge of Death Valley National Park, where environmentalists are pushing back on drilling requests for a potential lithium project.

“We are not traipsing around the West looking to find lithium mines to fight on principle,” said Patrick Donnelly, the center’s Nevada director, on a drive back after observing the buckwheat.

But he said it was unacceptable for the proposed project to be configured in a way that wiped out an entire species. All of the known populations fall within the project area, the petition notes.

“Are there trade-offs?” Donnelly asked on the bumpy Bureau of Land Management road. “Yeah, there are… In many cases, we are standing to the side while lithium mining proceeds. But we have to draw a line in the sand somewhere, and the center has drawn a line around species.”

The buckwheat is found in an area known as Rhyolite Ridge. It is near Tonopah and not far from Silver Peak, the country’s only active lithium operation. The landscape is accessible only by an unpaved road, and it’s in a remote enough that it overlaps with two areas that are considered to have wilderness characteristics, according to a 2017 analysis by federal land managers. But it’s not unscarred. There are signs of current and past mining exploration throughout the area.

At Silver Peak, lithium is extracted from brine. In the case of this project, the developer, Ioneer, is proposing to mine lithium using an open pit. In a statement, Ioneer said the lithium and boron would support the “green economy” as one of the most extensive deposits in North America.

And the company said it is taking the presence of Tiehm’s buckwheat seriously.

In its statement, the company said its goal was to move forward with the “environmentally positive production of the critical elements required for the production of green energy. That process requires careful environmental stewardship, including the remediation and propagation of Tiehm’s buckwheat which like several buckwheats in Nevada, only grows on a specific soil.”

It has contracted with an environmental consulting firm, funding surveys and studies to find new populations, understand the plant’s range, collect seeds and create seedlings for translocation. The company said it would also fund a graduate student to do more research in the future.

But that mitigation is not sufficient, Donnelly said. It’s the words “specific soil” that gets him. The Tiehm’s buckwheat is only known to grow under particular geologic conditions in Rhyolite Ridge. Relocation, reintroduction and translocation often have high failure rates, Fraga added during the site visit. And if plants are able to grow elsewhere, they often require human assistance.

For Fraga, this is not abstract. She is a buckwheat advocate.

Fraga, who serves as the director of conservation at the Rancho Santa Ana Botanic Garden, mentions she is a member of the Eriogonum Society (eriogonum is the genus for buckwheat). It’s one of the most popular plants she posts on Twitter. But she concedes others outside of the world of botany might not see it this way, a problem that often takes the name “plant blindness.”

“Biodiversity at large is important,” Fraga said. “It's arrogant of humans to think that our needs should come at the consequence of a whole entire species. It's a species that has existed on this planet for hundreds of thousands of years. It's a product of evolution.”

Conservationists argue that the proposal should be reworked to exclude the rare buckwheat populations. Ioneer is studying whether the buckwheat species can live elsewhere.

Those two responses strike at a common conflict when it comes to managing public land. BLM managers are required to manage the land for multiple uses: conservation and development.

“The thing with rare species and with minerals is that they kind of both are where they are,” said Bret Birdsong, a law professor at UNLV. “That can present an essential conflict.”

However, there are differing legal opinions about how to reconcile the conflict, often leaving an answer up to policymakers and political appointees to make choices about what they value.

“The law does not always resolve that conflict,” he said.

The listing is significant because it is the first time that the Center for Biological Diversity — one of the most frequent petitioners for endangered species listings — has asked the state to add the buckwheat to its list of imperiled plants. Usually those requests are made with the U.S. Fish and Wildlife Service under the Endangered Species Act. But the state, Donnelly said, could potentially move more swiftly under a statute giving the State Forester authority to protect flora.

And the petition argues that action is needed soon, with exploration activities, such as grading roads, disrupting habitat. It also alleges the BLM “is clearly not fulfilling any mandate it has to protect this species” by skirting an environmental analysis. The company disputed these claims, noting that exploration activity complied with federal law and prioritized buckwheat protection.

Under the statute, the state has 30 days to respond to a petitioner, notifying them whether they have decided to deny the petition or begin the regulatory process to protect the species.

“We’re expecting, and it is the law, that there will be prompt attention paid to this,” Donnelly said.