A water district wants a golf course to pay more. The golf course goes to court. In the middle of the dispute: Lake Mead 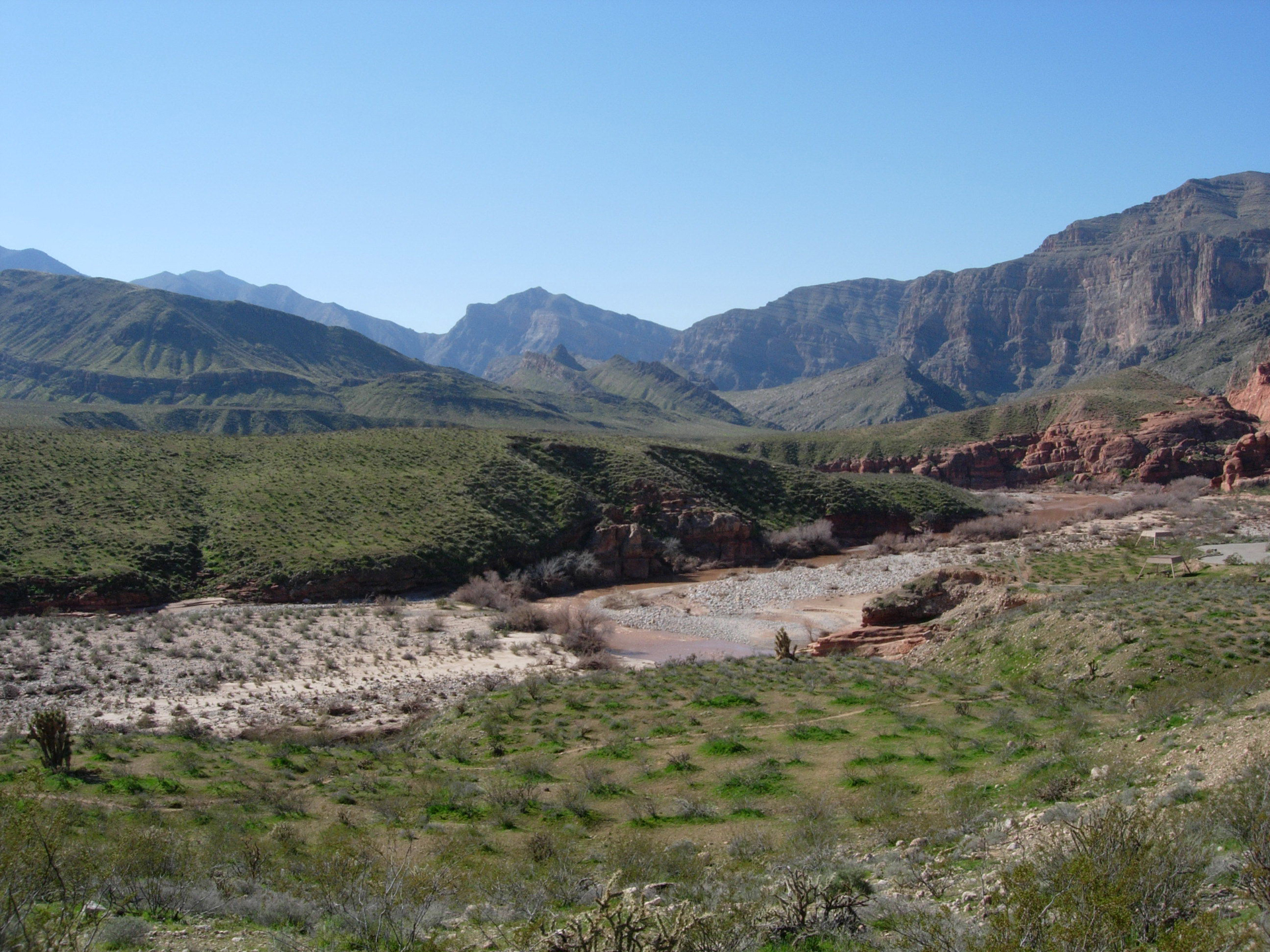 Straddling the border with Utah on a strip of arid land about 80 miles northeast of Las Vegas, golf courses dot the Virgin Valley and its largest town — Mesquite. The golf courses are made possible by the fact that the valley, despite dry desert conditions, can tap into the Virgin River.

The river rises above Zion National Park and snakes its way through Utah to Mesquite, where water is diverted for irrigation, before it connects to Lake Mead, the man-made reservoir that holds water for Arizona, California and Nevada as part of the Colorado River system. Policies on the Colorado River — a system serving 40 million Americans — have meant that water going down the Virgin River, every unit of water diverted to irrigate golf courses, has a dollar value.

And the golf courses have been getting cheap water — at least that’s how officials view it at the Virgin Valley Water District, which provides water to residents and businesses in the valley.

“It’s a sweetheart deal,” said Ben Davis, the vice president of the Virgin Valley Water District’s board. “That’s why the whole situation is very absurd when you look at it in a fair manner.”

Since 2011, the Virgin Valley Water District has leased Virgin River water to the golf courses and other irrigators for about $35 an acre-foot, the amount of water needed to fill an acre of land with one foot of water. The rate is nearly five times lower than what the district charges the Southern Nevada Water Authority (SNWA) to lease its water — at a rate of about $174 per acre-foot.

Over the past two years, the district has worked to raise the price of leased water on the golf courses, but it’s come against resistance. The conflict reached a peak this May when one of the golf courses — Wolf Creek Golf Club — took the issue to court, asking a judge to rule that the district could not match its rate to SNWA’s rate and to let the golf course sublease river water.

The conflict between the district and the golf courses exemplifies the difficulties of managing water in the most arid state, and it intersects with a number of issues: the strict doctrines of Western water law, Colorado River politics and the ever-changing value of a scarce resource.

Others see things differently than the district. Sandra Ramaker, a board member with the district in 2011 when the lease was signed, defended the relatively low rates for several irrigators. She suggested that if the leases had not been signed, more water would have been sold to SNWA.

“The idea was never to send the water away. The idea was always to keep the water in the valley,” Ramaker said. “I'm dead set against what the water district is doing [now].”

That’s where Colorado River politics come in. In 2007, after a seven-year drought tanked Lake Mead, Nevada and the six other states that draw water from the Colorado River Basin approved guidelines intended to keep Lake Mead — a crucial reservoir in the system — from entering into a shortage, one that would trigger deep cuts and potentially messy litigation between the states.

The guidelines allowed SNWA to store water in Lake Mead for Southern Nevada’s use in the future, something that would benefit the other states by boosting elevations in the falling lake.

But the deal also gave SNWA an incentive to purchase water and shepherd it into Lake Mead.

And one of the places the well-funded SNWA turned to was the Virgin River, a move that raised the price of water rights owned by those in Mesquite and nearby Bunkerville. In 2008, SNWA offered a lease price of about $328 an acre-foot to water rights owners in the Virgin Valley. Once SNWA purchased the water rights, it would leave it in the river, letting it flow into Lake Mead.

But as Ramaker noted, that meant that fewer water rights stayed in the valley. The Virgin Valley Water District, she said, wanted to keep its shares of river water to benefit the local economy. She argued that was one of the goals of cutting the deal with the golf courses for a low rate.

The 2011 lease for the Wolf Creek Golf Club expires at the end of 2019, and the Virgin Valley Water District’s position has been clear: It wants to raise the lease rate to reflect market prices.

But Wolf Creek has consistently pushed back.

Bo Bingham, a lawyer for the district, has said the lower rate is harming other ratepayers. The district came about its Virgin River water because it purchased it from the Mesquite Irrigation Company, a collection of water rights owners that can sell or lease their shares of Virgin River water. To this day, the district is still paying off the debt that came with buying the river water.

Because the golf courses are paying such a low rate, he said, the district is not recouping as much money as it could if it were leasing the water at a rate closer to where demand is.

“Every dollar that the district loses is one more dollar that the ratepayers across the valley have to pay to effectively subsidize the low rate to the golf courses,” Bingham said in an interview.

The district has already settled its issues with two other golf courses. The Palms Golf Club voluntarily gave up its leased shares of Virgin River water. And the Conestoga Golf Club reached an agreement with the district earlier this year to gradually raise its rate to about 90 percent of what SNWA pays the district. Wolf Creek remains the last holdout, and it has taken its issues to court.

The dispute hinges on the question of what the market price should be for Virgin River water.

A lawyer for Wolf Creek did not respond to a request for comment, but in a legal complaint, the golf course argued that the district’s board had said in the past that SNWA’s price was “inflated.”

“Consistent with the prior lease pricing, any increase in the annual rent would be limited to the current market value of similar irrigation shares in and around the City of Mesquite,” the legal filing states (the bold and italics reflect the style used in the complaint).

Some see the situation as the district now reneging on a deal it had once willingly approved.

Davis conceded that past leaders at the district had made decisions that, in retrospect, were “questionable.” He said re-negotiating the lease is a small part in an effort to clean up an “ugly past” for the valley’s water district, including a scandal that sent former water officials to jail.

“It’s part of what we’re doing right now — we’re trying to clean up the past,” he said. “We had bad actors. We had bad decision-making. We had questionable contracts being entered into.”

He said the board should have known the 2011 price did not reflect the value of the water. At the time, other buyers in the area had offered prices for the water closer to what SNWA had offered.

Davis emphasized that the district is not trying to punish Wolf Creek but said the board needs to represent all ratepayers to prevent them from subsidizing the golf courses through lower rates.

“[The golf courses] were not wrong for entering into that deal,” he said in a follow-up email. “Similarly we are not wrong for seeking more equitable terms on future contracts.”

Still, he is frustrated that the district’s dispute with Wolf Creek has turned to litigation. He said they should recognize that they had been getting a good deal and come to an agreement.

He said the golf course had been behaving like an “entitled entity.”

Wolf Creek, according to its lawsuit, has suggested it should be allowed to sublease the water it doesn’t use to other buyers like SNWA, likely reaping the benefits of a higher price for the water. In the complaint, the golf course asked the judge for an opinion about whether it could sublease.

“The leases’s restraint on subleasing is in derogation of Nevada’s long-standing policy of using water for beneficial purposes,” says the complaint, suggesting the lease is “unenforceable.”

But Bingham, the water district’s lawyer, said that such an arrangement is forbidden.

“[The lease agreement] expressly prohibits the sublease of any of the shares,” Bingham said.