As Lombardo campaigns for governor in sheriff’s uniform, state law, ethics commission guidance remain hazy on propriety of doing so 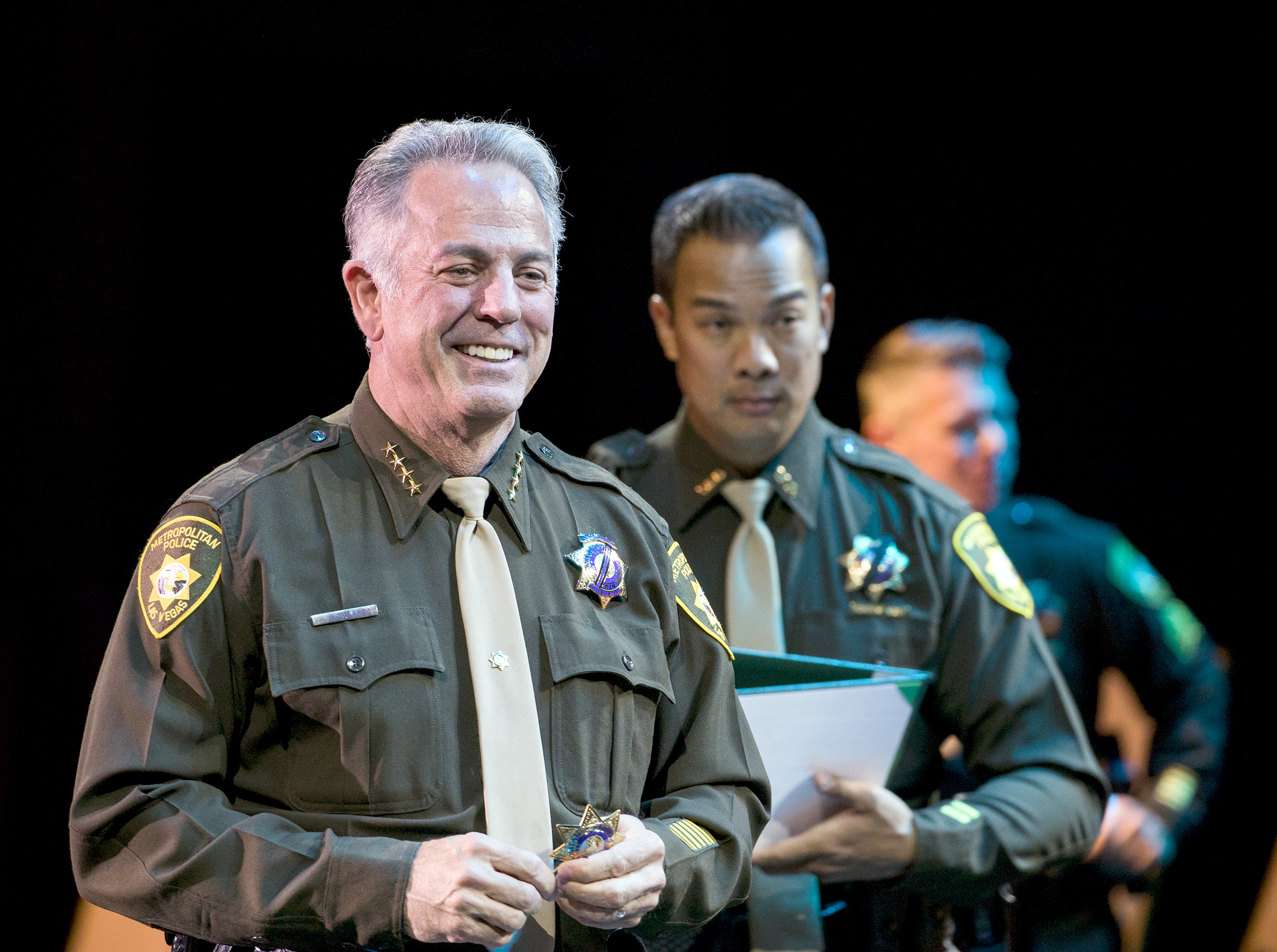 It’s no secret Joe Lombardo is running for governor on his record as Clark County sheriff.

When he kicked off his gubernatorial campaign last month, he said he would distinguish himself from his Republican primary opponents by taking the “law and order lane.” A biography on Lombardo’s campaign website emphasizes his more than 30 years of experience in law enforcement. A campaign video touts that his life’s work has been to “serve and protect.”

It’s common for candidates to talk on the campaign trail about how their day jobs and prior elected offices would shape their approach in office. But Lombardo has made the fact he is the current Clark County sheriff all but impossible to ignore in the first month of his campaign. A photo on his website shows him grinning broadly in uniform. The campaign video features clips with Lombardo in full uniform walking and talking with constituents. A pamphlet handed out during a meet-and-greet displays Lombardo, hands on his hips, with a sheriff’s badge prominently placed on his chest.

What isn’t quite as clear is whether Lombardo is actually allowed to use the imagery of his elected office — including his uniform and badge — to campaign for another one. Existing decisions surrounding the topic only address cases in which a sheriff was running for re-election, and even those are not etched in stone.

When reached for comment about the legal uncertainty surrounding the topic, Lombardo’s campaign strategist, Ryan Erwin, told The Nevada Independent that Lombardo is a police officer and sheriff, and Nevada voters are entitled to know and see what he does for a living. He also said that knowing a candidate’s work experience is vital when selecting a governor.

“Judges regularly appear in robes, teachers in classrooms, and prosecutors in courtrooms as part of their campaign materials - all are public employees in positions of trust,” Erwin said. “Singling out law enforcement from other positions of public trust makes no sense.”

Erwin added that elections and rules governing them should always be fairly applied and politicians use photos from events in campaign materials all the time.

Under state law, public officials and employees cannot use government time, property, equipment or other resources to benefit themselves or anyone else. But the law is mum on whether an officer or other public official using their uniform or badge while campaigning presents an actual conflict of interest.

David Hall, executive director of the Nevada Commission on Ethics, declined to comment on Lombardo’s use of his badge and uniform in his gubernatorial campaign, noting that it’s up to a public officer or employee to ask the commission for an opinion detailing the compliance obligations associated with their own conduct.

Reviews by the Commission on Ethics, an eight-member body appointed by the governor and Legislative Commission charged with interpreting and enforcing Nevada’s ethics laws, occur on a case-by-case basis to account for nuance and different situations. Commission decisions can result in a letter of caution or a fine, but the consequences of any given review are case-dependent.

“We encourage these public officers and public employees to utilize the advisory opinion process should they have questions about their individual compliance obligations under the Ethics Law,” Hall wrote in an email.

Though there is no word on whether the commission has been asked to take up Lombardo’s case, this isn’t the first time the issue of using the accoutrements of the sheriff’s office to campaign has come before the commission. The commission has penned at least three orders over the last seven years relating to sheriffs’ abilities to use official uniforms, badges and “other physical accouterments” of the office to support re-election campaigns — including one that prompted the commission to reach out to the state sheriffs' association in an attempt to prevent the issue from arising again.

In 2014, the commission determined that then-Washoe County Deputy Sheriff Tim Kuzanek’s use of his uniform and badge in his campaign for sheriff acted as a visual endorsement and provided an unfair advantage to Kuzanek at the expense of the government. Kuzanek was not, however, punished for the use of his uniform and badge because the commission concluded that Kuzanek’s actions were not a willful violation of the law in this particular case.

When the question again arose in 2016, during a commission investigation into then-Elko County Sheriff Jim Pitts, the body dismissed the alleged violations because state law does not explicitly prohibit an officer from using uniforms or badges in campaigns.

“The issue of whether an elected, incumbent sheriff may campaign in uniform is one of first impression for the State of Nevada and the Commission, and has not been addressed by Nevada’s courts or Legislature,” the commission wrote in its opinion. “Without State or local law governing or clarifying duties of elected incumbents regarding utilization of the accoutrements of office, the parties stipulate to dismissal of the alleged violation.”

The commission’s most recent ruling on the matter was in 2018, when the panel investigated then-Storey County Sheriff Gerald Antinoro’s decision to wear his sheriff uniform during debates and in photos used in campaign materials while running for re-election. In that case, the commission decided the campaign had not violated ethics law based on prior precedent and Antinoro’s lack of knowledge about rules and regulations.

However, the commission noted in its decision that an elected sheriff’s use of official accouterments of office to support re-election creates an “appearance of impropriety” and violates the state’s ethics law, a point it underscored by sending a letter to the Nevada Sheriffs’ and Chiefs’ Association recommending the association inform its members of the ethics commission’s position on the matter.

That ethics commission position isn’t, however, codified in state law, leaving the use of uniforms and badges in campaign materials an open question.

During the most recent legislative session, Assemblywoman Robin Titus (R-Wellington) proposed a bill, AB218, that would have allowed sheriffs to use physical accouterments in campaigns. Though the bill received a hearing, it died without receiving a vote in its first committee.