At Drag Queen Story Hour, ‘a difference between getting upset online and showing up in person' 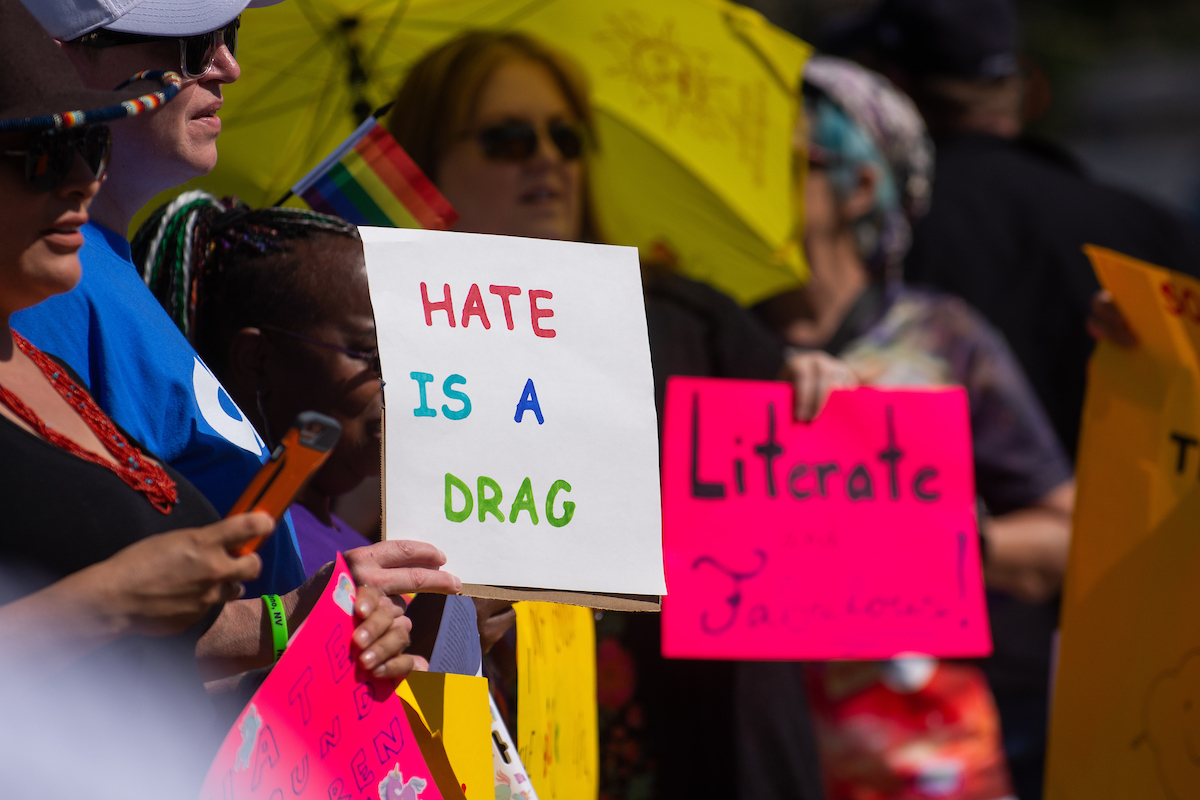 On the warm Saturday morning, a reverend dressed in a clerical collar stood outside the Sparks Library behind pride shirts and rainbow flags and signs that said, “I didn’t choose the book life.”

Rev. Kirk Woodliff, the rector at St. Paul’s Episcopal Church, had not traveled far. His church sits a parking lot away, and on Saturday, he was pleased with what he saw. Woodliff joined a crowd of hundreds to support Drag Queen Story Hour after a conservative group and Sparks Mayor Ron Smith sought to shut down the event aimed at inclusion and increasing LGBTQ visibility.

“It’s really absurd,” he said of the opposition to the event.

Libraries across the country have participated in the story hour, part of a national program that invites drag queens to read stories to students. The event is intended to bring more families to the library while promoting diversity. But as the story hours have spread from cities as geographically and politically diverse as Long Island and Mobile, Alabama, protests have followed.

The Sparks event was not immune — at least online.

In the days leading up to the story hour in Sparks, groups and individuals wielded language that was “homophobic and bigoted” as a way to oppose the program and get it cancelled, said Washoe County Library Director Jeff Scott. “And there’s no really kind way to put that,” he added.

The Nevada Family Alliance sent out a newsletter. The mayor, who did not respond to requests for comment, told the Reno Gazette Journal that the event was “ridiculous” and questioned why the drag queens should talk to children. Devon Reese, a gay Reno councilman, called out the remarks as “transphobic and homophobic.” Local officials received a letter saying Scott and the library trustees were “bowing to the feet of godless secularism and political correctness.” Given the backlash online, Scott and others expected there to be protesters at the event on Saturday.

But when the event actually came to fruition, only about five people showed up in protest.

“There is a difference between getting upset online and showing up in person,” he said.

Scott said the story hour, which came one week before Northern Nevada Pride parade on July 27, highlighted the importance of LGBTQ programming for a group often left out: students.

“I think that has always been a gap in programming — trying to find Pride events for kids,” he said as the event was ending. “People always get so upset about someone who is gay who is under 18, like that doesn’t happen. And it’s really frustrating, so I think it’s great to have that kind of support and for people to know that they are going to be accepted in this community.”

If anything, the calls to cancel the event likely brought more people to it. Lines to enter the story hour stretched past the library entrance and snaked onto the sidewalk. Library staff had to rotate parents and children in and out of the reading. And those who didn’t make it into the event still made a Saturday out of it, sitting at tables across the library, reading books to their children. According to the library’s gate count, about 800 people entered the library during the event.

Aspen Meadows, one of the readers, said the turnout was striking. After the reading, a long line of kids — and parents — waited to take pictures with the drag queens, as others danced to music. One of those parents was Sarah Ferris, dancing in the front corner with her daughter.

“I want my kids to be included,” she said. “I want them to see inclusion.”

Waiting outside for the story hour, a sixth-grader named Addison, echoed the sentiment. She added that a lot of students in her school were questioning their sexual orientation.

“It doesn’t make sense how everyone hates on people because they are different,” she said.

Meadows said that the point of the event was exactly that — to show younger kids that it is OK to express yourself freely. Attacks on that, especially coming from strangers, were frustrating.

“We're all regular, normal good people,” Meadows said. "To have strangers tell you that your intentions are something that they're not was a little upsetting."

Outside the library, Reese stood with other politicians and activists to show support for the event. Reese said the crowd number into the hundreds showed the region was inclusive.

“It was a lot of people online trolling an event that was designed to be for children to appreciate reading and share some inclusion with folks,” he said in a later interview. “People feel safe in this country to say all measure of things online. But when it came to the day of the event, there were 800 people who were thrilled to be there... and there was one person who was not.”

The event did as it was supposed to do. During the morning, Reese counted a line of about 30-40 people getting new library cards. He saw parents walking out with stacks of books.

“You strip away all of it and ultimately what we are trying to do is support the library,” he said.

Of the protesters that attended the event, the most vocal wore a microphone and held a sign with the Bible verse: “I am the way, the truth, and the life.” One Sparks resident said he came to the event because someone on social media encouraged him to see it for himself before he made a decision. He said he would have liked to have seen more discussion before taxpayer funds went to the event.

Many opponents tried to appeal the event to the Washoe County Commission and the Sparks City Council. But since its inception, the library has been shielded from local politics. In 1904, the first library in Nevada came to Reno through a grant from industrialist Andrew Carnegie. But the city wanted to keep the money, Scott said. In response, the library came to be governed not by the city or county, but by its own board, and it receives its funding through property taxes. 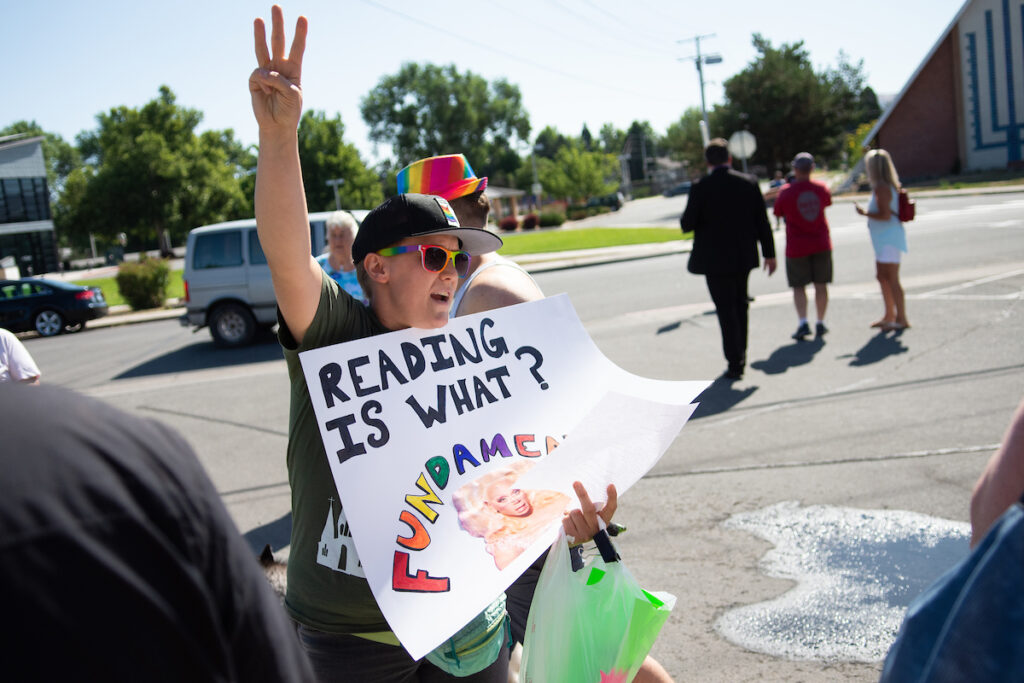 For Democratic Sen. Julia Ratti, a former member of the Sparks City Council, the event was not some abstract idea. This was the library she came to as a child and grew up around.

“Libraries don’t get near enough credit for being in the forefront of really having to address so many issues we face a society,” Ratti said. “For me, this is a very natural extension of my neighborhood library doing the kinds of things libraries do all the time… At the end of the day, for everybody who chose to be here, they are getting exactly what they came for, which is an opportunity to have discussion, an opportunity to break down barriers, to disabuse stereotypes, [and] to stand on the side of love. For me, that is a very natural place for the libraries to be.”

Jess Ebbe, who attended the event, organized a fundraiser as a response to the protest. She asked friends to sponsor a protester and donate $5 to $10 for each protester who showed up.

“Everyone here is tired of the hate and everything we see on a daily basis, so if we can step up and be inclusive and positive, we’re going to do it at the drop of a hat,” she said.

Despite the small turnout, Ebbe raised over $450. The money is being donated to the library.