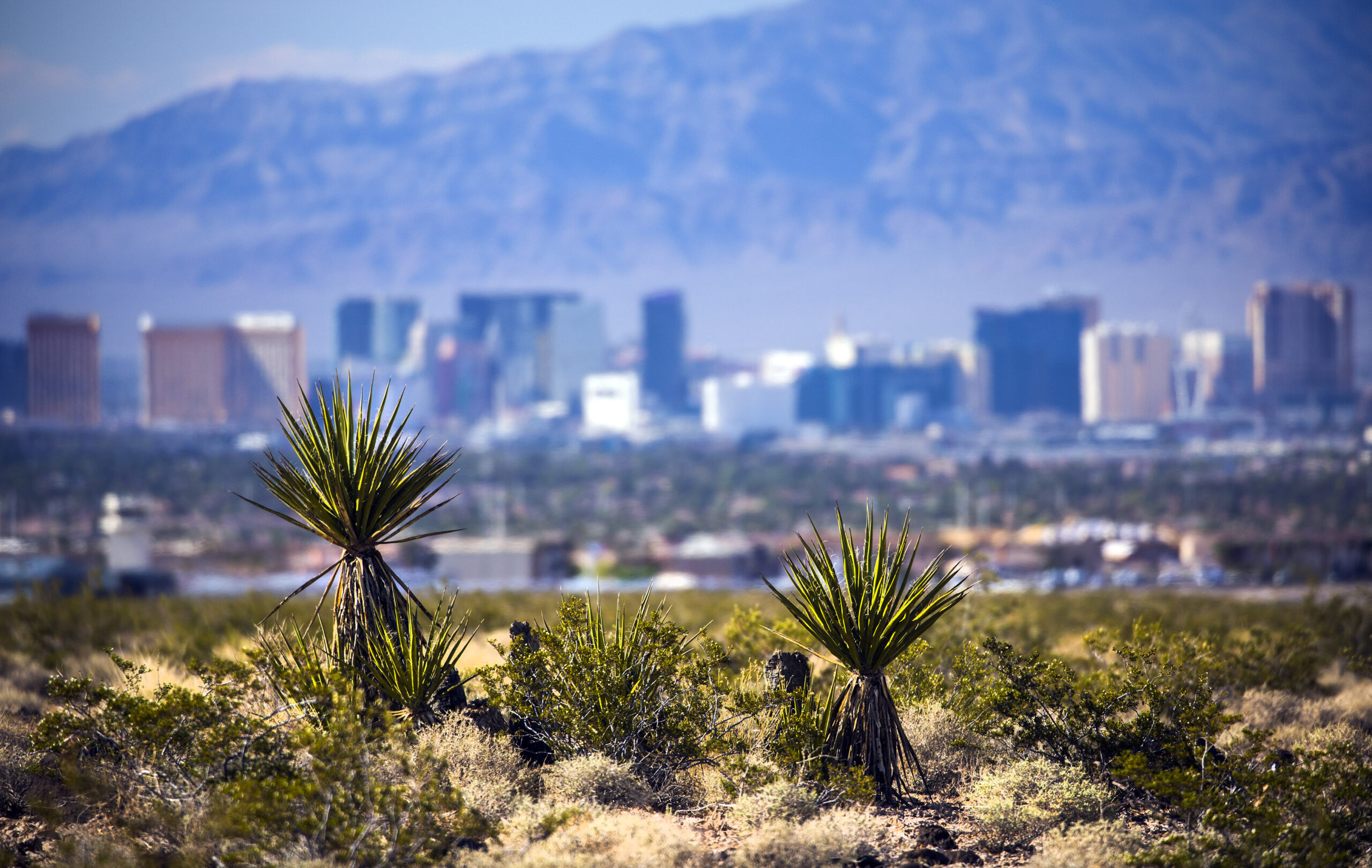 Depending on whom you talk to, the Clark County public lands proposal is a responsible way to develop Southern Nevada, striking a balance between conservation and new construction as the region’s population grows. Or it is a proposal that would contribute to sprawl, strain resources and harm the desert tortoise, a bellwether species for the health of the Mojave Desert.

On Tuesday, the Clark County Commission will have its first chance to weigh in publicly. The seven commissioners are expected to vote on a public lands resolution that, if approved, would ask Nevada’s congressional delegation to introduce a bill redesignating how some federal public lands are used in a county where the federal government manages more than half of the land.

Clark County staff, which have been working on the proposal for a year, cast it as an approach that balances growth and conservation. At its core, the proposal would allow the Bureau of Land Management (BLM) to lease about 38,000 acres of public land to private developers, mostly around the I-15 Corridor, and ensure development could continue, despite restrictions placed on the desert tortoise, which is protected under the Endangered Species Act. The bill would also set aside about 370,000 acres of wilderness, expand the Moapa Band of Paiutes reservation by about 41,000 acres and limit some growth near Red Rock Canyon National Conservation Area.

In a fact sheet, the county said the plan “hits a sweet spot.” Clark County Commissioner Marilyn Kirkpatrick, in an interview on Friday, emphasized that the proposal is far from final. The resolution, she said, serves as a starting point for drafting a bill, a template the delegation can build off of.

“There are still many conversations to be had,” she said.

“We’re really excited about the resolution,” he said.

Other groups are concerned that the proposal could erode protections for the desert tortoise, a point that the county has pushed back against. Earlier this month, nine groups including the Desert Tortoise Council, Friends of Sloan Canyon and Basin and Range Watch, wrote a letter to the county arguing that wording in the resolution could subvert the Endangered Species Act.

Here’s what you need to know about the proposal:

In 1998, under the Southern Nevada Public Land Management Act (SNPLMA), Congress created a “disposal boundary” around the Las Vegas Valley. Federal BLM land within that boundary could be sold to developers. The goal was to organize growth within a boundary.

That boundary has been expanded several times since then, and with the proposed public lands bill, Clark County would be seeking to expand it again by about 38,000 acres. The proposal would mostly open up land along the I-15 Corridor, land that developers have said could be used for distribution centers or residential homes as Southern Nevada’s population grows.

As The Nevada Independent reported, county commissioners and developers have argued that new land needs to come online to keep land prices — and in turn, housing prices — low. They said that infill projects, while worthy, are often more expensive than open land on the outskirts.

[Las Vegas] needs to grow out and it needs to grow up,” Steve Sisolak, the Democratic candidate for governor and the chair of the County Commission, told the Independent in May.

Others have argued that the plan will increase sprawl. The focus, they say, should be on infill.

The proposal would protect about 400,000 acres of federal public land. The protections would fall under two designations used by federal land managers. Roughly 80,000 acres would be protected as wilderness, which prevents certain types of development. The rest of the land would be protected under what is known as an Area of Critical Environmental Concern (ACEC).

Jose Witt, Southern Nevada Director for Friends of Nevada Wilderness, said the organization does not have a position on the bill but has worked with the county on the potential wilderness designations. He said the group has also proposed adding more wilderness to the plan.

“The county said they will look at them as they go through this process,” he said.

Then there are the ACECs.

The BLM uses ACECs to identify areas that need greater management attention than most other lands the BLM manages. The agency uses them to provide an extra level of protection to everything from important cultural sites to unique geology to wildlife. In this case, the roughly 292,000 acres of ACECs would help mitigate the impacts of development on desert tortoises.

ACECs can be nominated by individuals, groups or the BLM, but they are almost always approved through the BLM’s regional planning process. The proposed Clark County ACECs, if approved, would be big exceptions to that rule because they would be designated by Congress.

Everything comes back to the desert tortoise.

Because the desert tortoise is protected by the Endangered Species Act, the county is required to mitigate acreage every time it develops on land that could be tortoise habitat. In its original permit, U.S. Fish and Wildlife Service, which administers the Endangered Species Act, allowed the county to develop on about 145,000 acres of land if it set aside 2.9 million acres for the tortoise. That permit was approved in the 1990s and since then development has soared.

The county has about 66,000 acres left to develop under that permit, a potential challenge as population grows and regional planners chart new development. Part of the public lands proposal contemplates allowing the county to expand the amount of acreage it could develop.

Because the bill proposes about 292,000 acres for mitigation, the proposal asks to expand the amount of developable acreage permitted by the Fish and Wildlife Service on a one-to-one ratio.

That language prompted the nine groups to write a letter to the county. The groups argue that the legislative change would go around the administrative environmental review process for deciding whether the county is adequately mitigating development’s effects on the tortoise. Applying an arbitrary one-to-one ratio undermines the planning process, they argue.

They argue the county proposal avoids a collaborative “scientific review” and “would allow politicians, not scientists, to decide the fate of the desert tortoise in Southern Nevada.”

Jim Moore, a former Mojave Desert biologist for the Nature Conservancy who worked on the permit negotiations over his 28 year career said “it’s worrying they are going a political route.”

“All land is not created the same,” he added.

He said that the decision of which land should be conserved as mitigation for the desert tortoise should be made is usually done in a process that results in a rigorous environmental analysis. Asked why some environmental groups and the Fish and Wildlife Service, at least so far, don’t seem to be pressing the desert tortoise issue, Moore responded: “It’s a political animal.”

The county pushed back on the claim that there might not be adequate environmental review. Marci Henson, who runs the county’s air quality program and is heading up its work on the public lands proposal, noted that an environmental impact statement will still be done on the permit with or without a potential bill in Congress. She pointed out that there is already an ongoing environmental review that started in 2008 on an amendment to the permit.

She said that even with the congressional bill, the U.S. Fish and Wildlife Service could come back and tell the county it’s proposal does not do enough to mitigate the impacts of scrubland development on tortoise populations. At that point, the county could revisit the mitigation.

“We are fully prepared to be in long, protracted negotiations with the [agency]," she said.

An Expansion for the Moapa Band of Paiutes

For years, the Moapa Band of Paiutes has urged the delegation and county to expand its reserved land for economic development, the construction of new homes and solar arrays.

The proposal would expand the tribe’s land by about 41,000 acres.

Moapa Band of Paiutes Chairman Greg Anderson said the tribe has been working with the county for months, and he applauded Kirkpatrick’s work to get the land included in the plan.

“It’s a great help for our people to get some of our lands back,” he said.

In addition to the public lands resolution the commissioners will vote on Tuesday, they will also consider two related but separate resolutions that address potential issues arising from the bill.

The first resolution seeks to address growth around Red Rock Canyon National Conservation Area. It is a response to concerns that the public lands proposal could place pressures on a sensitive recreation area valued for its hiking, climbing and unique geology.

The Red Rock resolution would commit the county to pursuing “smart growth” near the conservation area, requiring developers to integrate the character of their landscape into their construction designs. It also instructs the county to study ways to reduce traffic.

The final agenda item the county commissioners will consider addresses the off-road vehicle community, which has been concerned that the public lands proposal could decrease access to trails around Clark County. According to the agenda, the county commissioners will discuss a potential resolution supporting off-road vehicles and the possibility of creating a committee to “preserve and enhance” off-road activities.