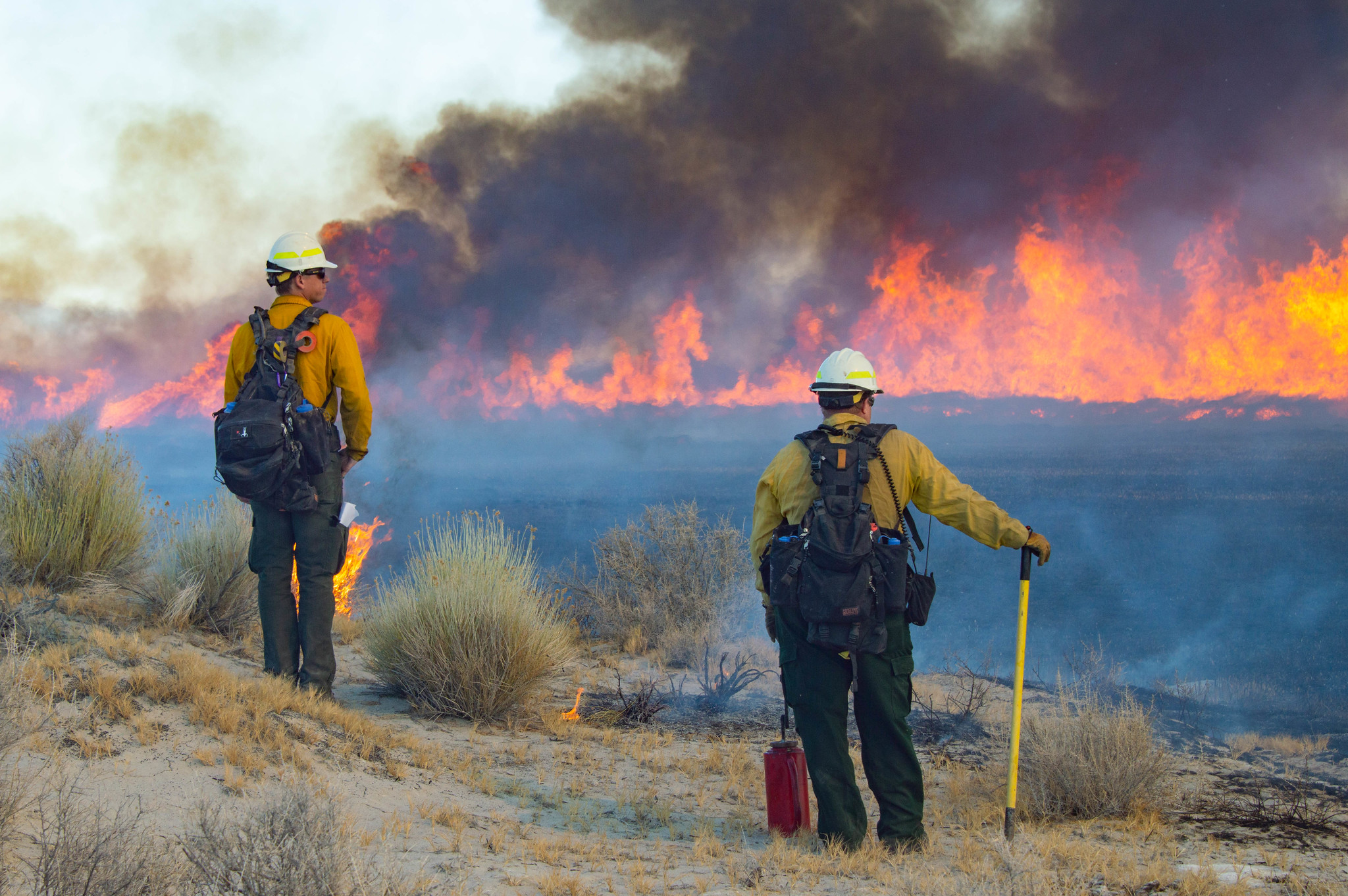 Late Wednesday evening, firefighters responded to a 10-acre blaze at Clark County Wetlands Park. But for most of the crews, it was not a typical response.

Fire crews from the county, state and the Bureau of Land Management (BLM) — the federal agency responsible for land activities on about 67 percent of Nevada — arrived on scene in east Las Vegas hours after the number of confirmed coronavirus cases surged past 1,200.

Under normal circumstances, the Nevada Division of Forestry would send a crew of about 10 people, often inmates. But the Department of Corrections is not releasing inmates to serve on crews in an effort to contain the spread of the virus in conservation camps, facilities for minimum-security offenders who help state agencies fight fires or clean highways.

Instead, the division sent a team of crew bosses working for the state. Vehicles that normally fit about 14 people were largely empty. The first responders were staggered with two people per vehicle in order to social distance. If one person in a crew gets coronavirus, the whole crew could be infected.

But KC said if there are multiple, larger fires, first responders won’t have the same flexibility to stagger in additional vehicles. Few agencies have the resources to respond with multiple vehicles, as the Nevada Division of Forestry did for the Wetlands Park fire. In fact, firefighting across the West is premised on sharing resources across agencies, states and even international boundaries.

For firefighters, efforts to contain the coronavirus — advisories against travel, social distancing, business closures — present a unique set of potential challenges heading into fire season. In some cases, the same first responders, charged with fighting fire, are being enlisted to respond to coronavirus cases or organize regional efforts in minimizing the spread of the coronavirus.

“As they are getting tapped, that puts a lot more reliance on state and federal response,” said KC, who leads the forestry division. “And that's what's kind of making us nervous right now.”

In any given year, Nevada sees a range of fire types. Some are urban fires. Others are wildland fires, burning in non-native grass and sagebrush. Others burn on the urban-wildland interface. Regardless of where a fire is burning, officials say the best strategy is to keep crews healthy.

“If we have half of our workforce debilitated from coronavirus, that's a big reduction,” Charlie Moore, the chief of the Truckee Meadows Fire Protection District, said on Thursday.

On a small scale, Moore has already seen what happens when one employee is exposed to the coronavirus. After one employee in the fire department tested positive, he directed an entire crew to immediately quarantine out of a concern that they could have been infected by the employee. Those positions have been backfilled with firefighters receiving overtime.

“If we get a lot of cases like that, then we are going to have closures,” he said, but stressing that has not yet been an issue. “We’re not anywhere near that right now. But that is our contingency.”

Moore said any such decisions would be made based on data points, including call volume and where other resources, including city fire stations, are spread out throughout Washoe County.

Some fire departments, including the Truckee Meadows Fire Protection District, are taking steps to limit exposure when dispatched to patients exhibiting coronavirus symptoms. Eric Guevin, the fire marshal for the Tahoe Douglas Fire Protection District, said they are taking steps to protect their workforce by asking first responders, when possible, to avoid entering infected homes.

“You get one person who gets it and that can cut the whole crew down,” he said.

Guevin said the fire department is also working to ensure that fire infrastructure — alarms and sprinklers — in buildings and vacation homes across Tahoe are still working, despite the closure of businesses.

Another area affected by the coronavirus: training.

As fire agencies hire seasonal employees for the late-spring and summer months, much of the training might need to shift to online learning.

“We’re having to change a lot of what we do,” Guevin said.

For larger fires, state and federal agencies are working on contingency plans. By acreage, most of the blazes that burn in Nevada are on federal land. Of the roughly 82,000 acres that burned in Nevada last year, more than 85 percent of the area burned was managed by the BLM or the U.S. Forest Service. The risks of fighting fire during coronavirus is something the Department of Interior is assessing, said Jessica Gardetto, a National Interagency Fire Center spokesperson.

Gardetto said the agency has assigned three teams “to work with partners at all levels in the fire community to develop protocols for wildfire response during the COVID-19 pandemic.”

But a coordinated response to a large blaze could become more challenging as officials work to balance the protection of their crews from coronavirus and the need to blunt a fire’s movement.

Depending on the type of response, firefighters might be required to set-up camps near a blaze. In some cases, wildland firefighters assist with crews and equipment from states across the West, raising social distancing concerns for preventing the spread of coronavirus.

KC said officials are exploring a variety of options in that scenario, from changes to how food is served to creating a more dispersed set-up that limits the spread from one crew to another.

That comes as the state is already looking at an over-extended workforce — at least for now.

Fighting fire is often dependent on a multi-agency response. With local departments focused on coronavirus, KC said they might not be as able to dispatch firefighters to support incident management teams. She said it might seem small when it’s only four to five fewer people on a team.

But “it’s huge when everyone is doing the same thing,” she said.

And in states across the West, including Nevada, the Department of Corrections runs several conservation camps, where inmates receive training to fight fire.

There are about 74 inmate crews across the state, with about 10 to 12 inmates to a crew. As a result, the workforce that comes from the conservation camps far exceeds the number of full-time state employees.

KC said the Department of Corrections is holding inmates at the conservation camps to prevent the spread of coronavirus in a high-risk population.

Although KC said that policy could change in the case of an extreme emergency, it could present an issue depending on how long the state requires agencies to implement social distancing and mitigate the spread of the coronavirus.

For now, a lot depends on when and where the fire season starts.

The National Interagency Fire Center in Boise predicts that most of the country will stay out of fire season for the next two months. But there are some exceptions, including the southern Great Basin and California.

And the weather in the coming months remains a big factor in assessing fire risk. Although precipitation can help firefighters in certain cases, it can also lead to the growth of non-native grasses, a major fuel source for fires, from Douglas County to White Pine County.

Worst-case scenario questions remain: What happens to fire evacuation plans during an outbreak? What happens if several crews are forced to quarantine at once?

KC said local, state and federal officials are at the start of planning for these contingencies. State officials, she said, are looking at the possibility of pushing up an interagency fire briefing for Sisolak because of the need to plan for the coronavirus. Last year, the briefing was held in late May.

But there is one thing that fire officials know for certain. The fires are not going to stop.

“There is still work to be done,” Guevin said. “The fires are going to happen.”