Conservatives should stand up against Nevada’s death penalty 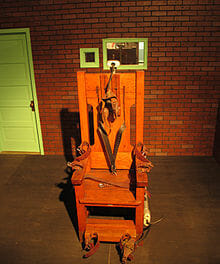 Conservative Republicans are expected to offer stiff opposition to a bill winding its way through the Legislature – a hearing was held Wednesday by the Assembly Judiciary Committee -- even though the legislation might embody conservative principles better than any other proposal in recent memory.

The bill would take a completely ineffective law off the books; eliminate a failing, unnecessary program; dramatically reduce cost to taxpayers; protect public safety; and take government out of a business it shouldn’t be in – the business of killing its own citizens.

It should be a Republican’s dream come true.

As a policy analyst, think tank president, columnist, political watchdog and government waste expert, I’ve spent my life defending limited government and conservative principles. I used to support the death penalty, but now I understand that capital punishment is an affront to the values I hold dear.

It’s strange that many fellow conservatives will, on one hand, correctly point out that the state isn’t capable of handing out driver’s licenses without ridiculous wait times and mountains of bureaucracy, but then on the other hand argue that same government should have the authority to put people to death.

Not surprisingly, giving bloated, inefficient and often incompetent state governments the authority to decide who lives and who dies doesn’t always work out well.

Nearly 160 Americans have been released from death row due to wrongful convictions. Others haven’t been so lucky. More than 4 percent of the people put to death since America began reinstituting the death penalty in 1976 were innocent, according to the Proceedings of the National Academy of Sciences.

Even if we lived in a dream world where states never executed an innocent person (and technology may one day make that possible), the death penalty should still be repulsive to conservatives who believe government's power should be limited.

The death penalty is also a tremendous waste of money. Just seeking the death penalty adds about $500,000 to the cost of a murder case here in Nevada – and the defendant isn’t sentenced to death in more than 80 percent of those cases.

That half-million-dollar hit to taxpayers is just the up-front cost for a trial; it doesn’t include costs for appeals or incarceration. Credible studies indicate the total price tag to sentence a murderer to death by execution generally runs about 10 times higher than sentencing that same person to life in prison without parole (or more accurately, “death in prison”).

In addition to being ridiculously expensive, the death penalty fails at its most basic function: deterring crimes. No reliable study has shown that the death penalty is any more effective at discouraging violent crimes than the prospect of death in prison.

The death penalty also often fails to provide murder victims’ families the closure and peace they deserve. In fact, it often prolongs their agony. Several families of victims killed in the Boston Marathon bombing objected to a death penalty prosecution after speaking with other murder victim families who warned about the numerous appeals and often emotionally painful legal process associated with the death penalty.

This seemingly never-ending legal rollercoaster is especially pervasive in Nevada where only 12 of the 160 people sentenced to death have been executed – and 11 of those individuals asked to be put to death rather than spend another day in prison. In fact, a death sentence is more than 4 times more likely to be overturned than carried out in Nevada. And that number will only increase because it’s currently impossible for the state to perform executions.

The state doesn’t have the drugs required to carry out a lethal injection and has no way to purchase them. According to the Review-Journal, the Department of Corrections sent 247 requests asking drug companies to supply lethal injections drugs.  There were zero replies. As a result, state taxpayers are paying the expenses associated with the death penalty even though executions won’t take place for the foreseeable future.

Fortunately Nevada is well-positioned to stop the uncertainty, cost and failures associated with the death penalty while still protecting the public. In 1995, state lawmakers passed the toughest life without parole law in America. When someone convicted of a heinous crime is sentenced to death in prison in the Silver State, they never set foot outside of the penitentiary.

Conservatives in the Legislature have a unique opportunity to pass a law that squares with their limited government principles. By abolishing the death penalty, lawmakers will save taxpayers money, eliminate the possibility of killing an innocent person, and strip the government of power it shouldn’t have. What could be more conservative than that?

Drew Johnson is a Nevada resident who serves as a Senior Scholar at the Taxpayers Protection Alliance.