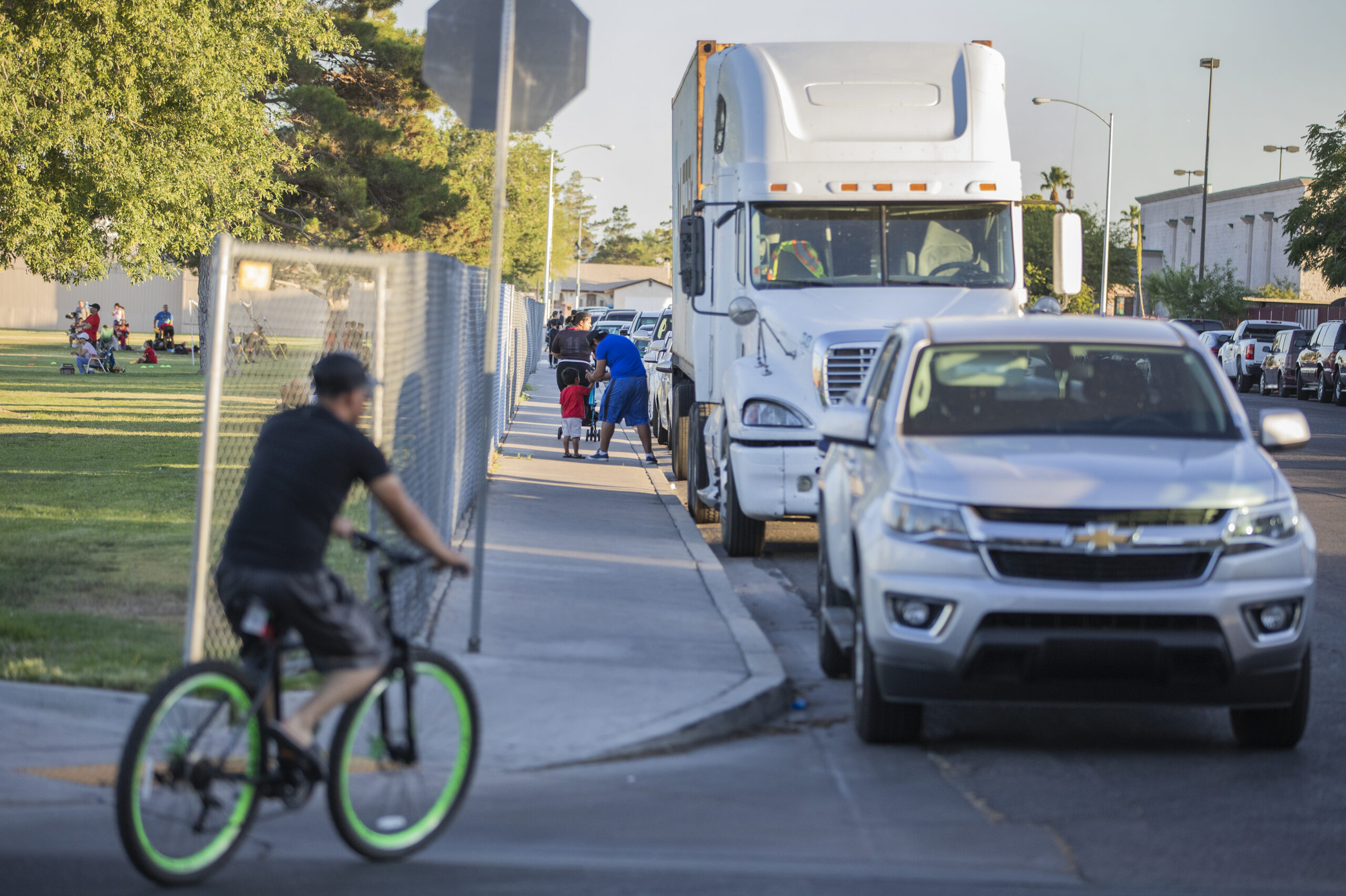 Clark County Commissioner Tick Segerblom first brought attention to the issue during a commission meeting in early June, proposing that the board grant enforcement powers to multiple agencies. As it stands now, only the Las Vegas Constable’s Office has jurisdiction over ticketing the vehicles.

“My constituents would call in and say that these are residential neighborhoods and somebody is parking a semi-truck there overnight or for several days,” Segerblom said in an interview with The Nevada Independent.

The first-term commissioner said there is not any active government entity involved in addressing the problem because the constable’s office is under-resourced and limited by state laws.

"We get complaints that there's five, 10 of them parking at one time,” Commission Chairwoman Marilyn Kirkpatrick said. “There’s lots of complaints on a regular basis.”

State laws NRS 484B and NRS 487 require a 72-hour notice on vehicles illegally parked before an actual citation or removal. Segerblom said the constables aren’t inclined to visit neighborhoods after 72 hours because often, by that time, the vehicles have been moved. Plus, truckers frequently park on a Friday and leave the large vehicles over the weekend when the local constable isn’t working.

The former state legislator-turned-commissioner said the tractor-trailer situation is an example of well-intentioned but misguided laws crafted in Carson City. The 72-hour notice before taking action, he said, sounded reasonable before he saw the effect at the local government level.

“Then you come down here and try to actually do something, and in 72 hours you can’t get anything accomplished,” he said.

Segerblom said he plans to take the issue to the Legislature in 2021. In the meantime, county officials have drafted an ordinance that would amend Clark County Code and allow Metro Police, county code enforcement officers and the constable’s office to ticket commercial vehicles illegally parked in residential neighborhoods.

Violators would face a $100 fine for the first offense, $250 for the second offense and $500 for each subsequent offense. After the 72-hour warning notice, trucks are also subject to be towed if still in violation of the law.

Segerblom said the ordinance also would authorize the county to post more signs showing the prohibition of trucks in spots where they are commonly found.

The ordinance will be presented in a public hearing Aug. 6.

“It’s a public safety issue: having trucks park in the right-of-ways,” said Kirkpatrick. “We need to find a place for truckers to park responsibly.”

Her comment points to part of the problem. Right now, there are only two official places in the valley designated for tractor-trailer parking — private lots off the Blue Diamond Road and Craig Road exits on Interstate 15.

“(This is) a problem, too, because a lot of these guys are self-employed truck-drivers, and they do have the right to go home,” Segerblom said, noting the importance of addressing that aspect. “You know, that’s what they do for a living, so they are a vital part of our community.”

According to commissioners, the problem isn’t a new one — and it can lead to other headaches, such as torn-up roads.

“We have been battling this issue for years,” Commissioner Lawrence Weekly said during the June 4 meeting. “It’s interesting because they have created their own little schedules. They kind of know (the constable’s) schedule. They move it around the block or they go and move it in the desert somewhere for a couple days, then you look back up the following week, the trucks are right back.”

Weekly and Kirkpatrick said, in the past, commissioners had taken photos of illegally parked vehicles and sent them to state transportation officials.

A 2015 interview with a county resident by KTNV Channel 13 highlighted the longstanding problem. Stephanie Zepelin reported at the time that Metro had said the issue would be perfect for community-oriented policing groups or for the county’s code enforcement.

“I’m sure it affects every single part of this valley. So, this is something that’s long overdue. Ever since I got here we’ve been talking about it. I think it makes sense we give direction to the staff,” Commissioner Jim Gibson said. “We’ve beat it to death at this level and now we need some solutions.”