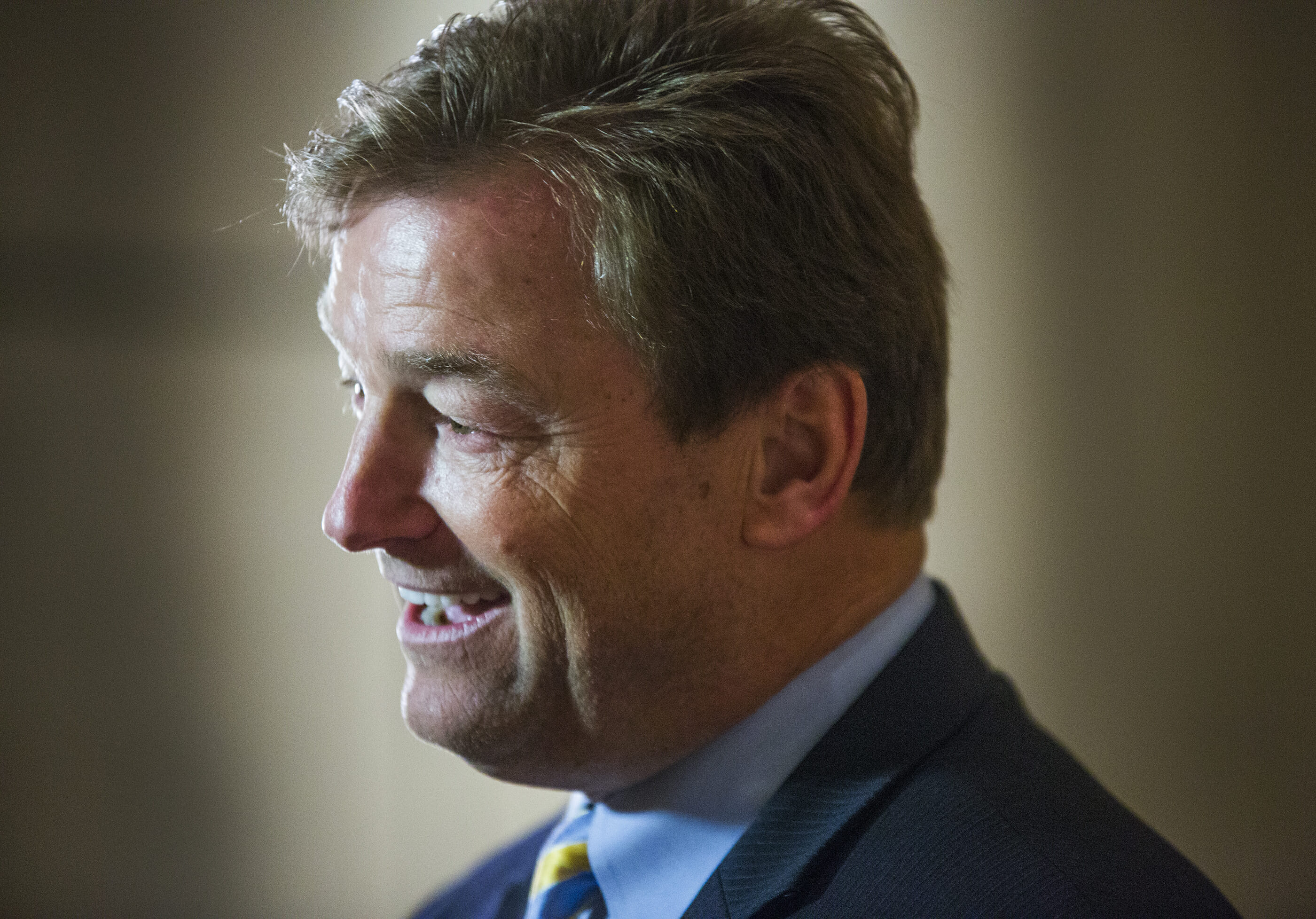 Sen. Dean Heller filed for re-election Friday, and I have to ask: Why?

Oh, he can win, and I get the strategy: Put on the Trumplove mask for three months, playing a role that requires you to go against everything you were in ’16 and everything you claim to be (“No Labels”), scrape off the barnacle-like Danny Tarkanian, and then again show a moderate face as your campaign goes scorched earth on Rep. Jacky Rosen.

But what will he have won? A job he doesn’t want or just isn’t very good at in a place he doesn’t really want to live? To spend his time scurrying away from reporters so he doesn’t have to explain the latest iteration of a policy position. Why?

Heller filed for office Friday in a way that was emblematic of what he has become: A public official who hates being in public, a senator known to duck out what D.C. reporters call “The Heller Door” in Washington to avoid the media, a man desperate to hide as he tries to survive.

After making an appointment to sign the papers Monday and after the Washoe County GOP sent out an announcement for people to come support him in Carson City, the senator snuck into the Capitol and filed on Friday without any fanfare. The abrupt change of plans came only hours after Politico posted a devastating piece detailing disturbing remarks Heller made at a fundraiser last week.

If anything should persuade Heller that he is better off – and perhaps the state and country are, too – if he retires to his Smith Valley ranch, it was the audio obtained by Burgess Everett.

This was Heller Unplugged, saying whatever came into his head, without the benefit of a script slipped to him during one of his caller-restricted telephone town halls. It was so, so revealing – and what it unmasked was a man with no lodestar, meandering from nonsensical Rush Limbaugh policy prescriptions to contradictory vertigo-inducing rhetoric.

— “Republicans want illegal immigrants to work, but not vote. Democrats want them not to work, but to vote. Think about that for a minute.”

Sorry, senator. I can’t think about it for a second.

Nothing about what he apparently thought was a pithy encapsulation, no doubt fed to him by some self-proclaimed genius, is true. It also manages to slander both political parties, showing Heller’s one true “skill” and why he is so endangered this November: He tries to please everyone and pleases no one.

Heller also said he has a “history” on immigration of supporting comprehensive reform, but only if you start the clock in 2013, after he was crushed by Hispanics the previous year, after talking about “anchor babies” and saying he opposed The DREAM Act.

And he also came out with this: “I heard one proposal that I thought was unique. I didn't necessarily agree with it, but we will give amnesty to every illegal immigrant in America so long as they can't vote for 25 years."

This is idiocy propounded by Limbaugh, and which Trump actually might love. Heller’s equivocation on the “proposal” was oh-so-Heller, too. Pro tip, Senator: If you don’t agree with an idea, don’t bring it up.

— Heller said he does not know where the president stands on trade or guns, and quickly added: “But I’m not going to stand up here and criticize him.” (You know, lest Tarkanian pummel him, which he did, predictably, anyhow, after the Politico piece went live.)

Heller was all over the map on Trump in the remarks that followed, praising him for spinning straw into gold on many topics, for there being a method to his madness, for getting the tax bill passed. But he also said unequivocally that Russia meddled in the 2016 election, and not once, not twice but three times said Robert Mueller’s probe must go on and will get to the truth.

Let’s hope the president doesn’t find out about that or he might start wearing Rebel red (right Danny?)

— Heller said his campaign could be boosted by the imminent retirement of Justice Anthony Kennedy, creating the issue of a GOP Senate being needed for the next confirmation fight. He talked as if he had some inside knowledge, which was, well, weird.

There was more, too, but the most telling line of the Politico piece was this one: “The senator declined to comment on his remarks.”

Of course he did. And that’s why he filed quietly on Friday instead of with fanfare, as originally planned, on Monday.

Heller has no idea who he is, no idea what he wants to be (except to avoid the horror of being in the private sector) and no idea what to do except what he has always done: run.

And why not? He has never lost.

Heller, who once was a maverick secretary of state unafraid of taking on the Establishment, has seemed since his near-death experiences in 2006 (for Congress) and 2012 (for Senate) to be as protean as Mystique, seemingly adapting to the shape and form of whatever will secure a new job title or keep a current one.

Hence, he hated Trump before he loved him, he disdained DREAMers before he embraced them and he was against repealing Obamacare before he was for it. And, of course, Heller said he supported Planned Parenthood before he was lauded a few weeks ago by a national pro-life organization. Only Dean Heller could pull off that one.

Yes, consistency can be the hobgoblin of lesser senators, but that is not the case, here. There is no evidence of explicable evolutions in his positions, of careful intellectual probing that resulted new stances. The shifts have been sudden, clearly motivated by polls, and presumably resulting in drivel whispered in his ear by a staff all too willing to help their boss throw principle out the window as he sneaks out the back door.

Heller has no good explanations for most of these shifts, which helps explain why he avoids the media. It is well known in political circles that Heller wanted to move home and run for governor but was scared off by conservative darling Adam Laxalt, the attorney general. He doesn’t relish the job of being a U.S. senator — and it shows.

So he is running for re-election. The question he should be asked, by the media if they can find him and by voters if he will talk to them, is simple: