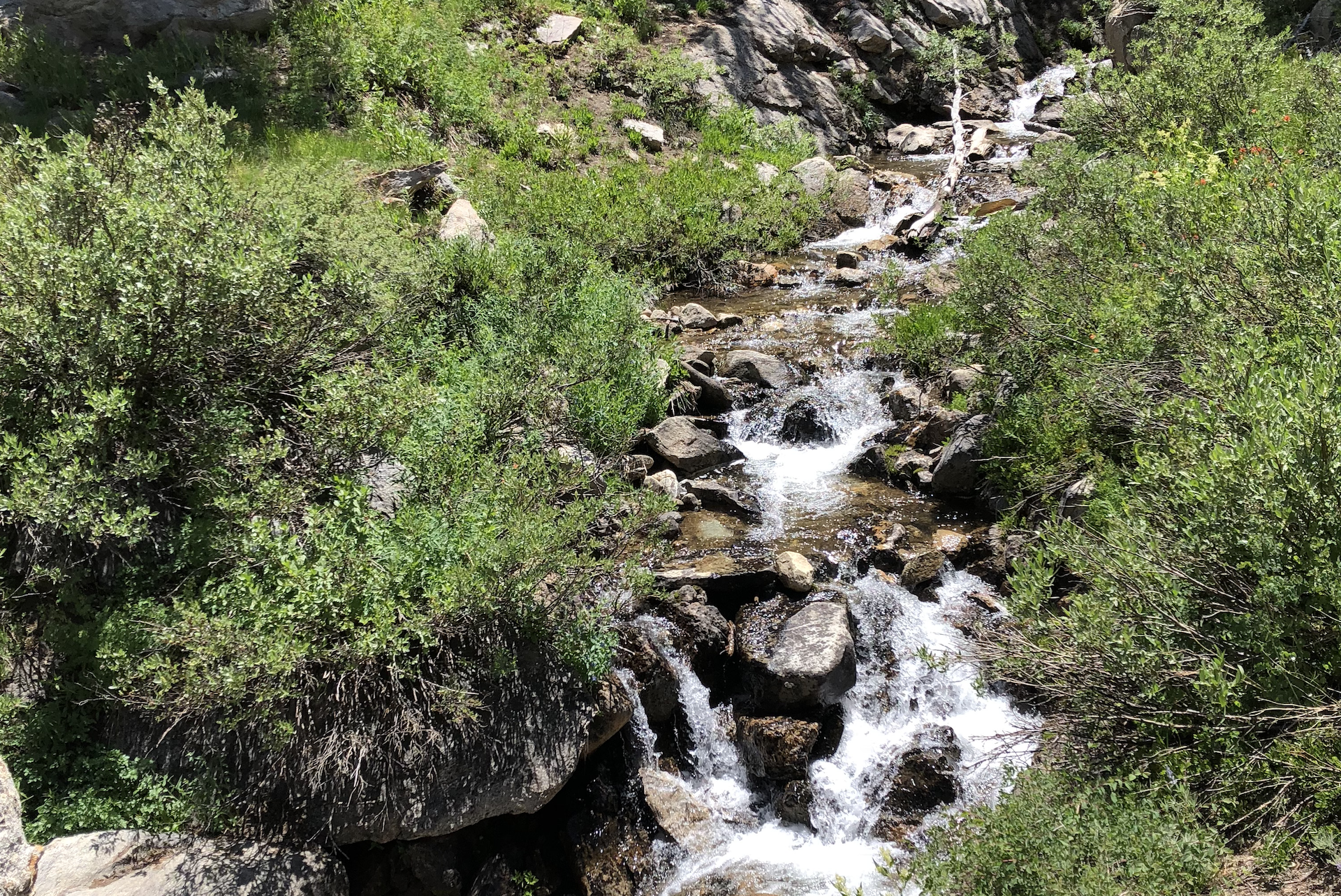 Hiking near a snow-speckled mountain on a late spring day, it’s not hard to find water running through a narrow stream. Come back several months later, and that stream might be empty.

In Nevada, most waterways work this way. Roughly 90 percent of the state’s streams are intermittent or ephemeral, running at only certain times of the year in response to snowmelt or precipitation, according to data compiled by the Nevada Division of Environmental Protection (NDEP).

It’s a fact throughout the West, from Arizona to New Mexico. Many streams are seasonal.

Scientists say these streams, despite running irregularly, are important for ecosystem health in arid areas. They connect waterways, replenish groundwater supplies and support wildlife. That’s one reason many environmentalists are concerned about a Clean Water Act rollback, set to go into effect later this month, that would exclude most of these streams from federal protection.

Although the Clean Water Act will still protect heavily used waterways in Nevada, including the Colorado River and the Truckee River, it excludes many wetlands and most seasonal streams.

As a result, the rule has set off a flurry of legal challenges from environmental groups. And in recent months, several Democrat-led Western states, including Colorado, California and New Mexico, have sued the Trump administration to challenge the final rule.

Nevada has not joined those suits. In comments submitted last year, NDEP described it as a “considerable improvement” over the Obama-era rule it replaced. Still, state regulators say they are evaluating the new rule’s total effect, and they expect to have to adjust existing permitting programs. They argue any gaps in protecting water quality will be addressed under state law.

But several environmental groups say it is too early to tell.

Joro Walker, a lawyer with the Western Resource Advocates, questions whether Western states have the enforcement resources to enforce the rules as the federal government steps back.

“The practical aspect of this is incredibly important,” said Walker, who works in the Mountain West. “If the state is not equipped, having great law doesn’t really matter if you can’t enforce it.”

As the state’s environmental agency, NDEP is responsible for enforcing the state’s water quality standards. Jennifer Carr, the agency’s deputy director, said that the division is still mapping out how many streams and wetlands would lose federal protection under the Clean Water Act.

Whatever the volume, the state expects to assume more regulatory responsibility.

“We have all the authorities in place that are needed to permit any sort of discharge activity in the state of Nevada, whether it's federally jurisdictional or not,” Carr said in an interview.

Like many states, Nevada has a permit program for maintaining water quality when developers seek to discharge water into streams or groundwater. But when it comes to modes of development that seek to dredge and fill wetlands protected under the Clean Water Act, the permitting process is done with the U.S. Army Corps of Engineers. That is expected to change.

“The fine points of whether or not a specific existing program needs a little bit of enhancement or refinement is one of the things that we're working through at this point in time,” Carr added.

The new rule redefines which wetlands are protected under the federal law. With more wetlands eliminated from federal jurisdiction, it’s likely that the state would have to issue more permits on its own. Carr said it is “one of the real, more specific examples” where the agency might need to adjust an existing program for developers applying for a state “Working in Waterways permit.”

Regulators do not process many Clean Water Act wetland permits each year, Carr said. Over the past 12 years, she said the state has worked on about 16 wetland permits and five spring permits. She also noted that the majority of discharge permits, issued under the Clean Water Act over the past 12 years, have been for waters that remain protected under the new rule.

In other cases, the new rule calls into question whether even some larger rivers fall under the Clean Water Act. As part of the rulemaking, the Trump administration approved a more narrow federal definition of what the Clean Water Act protects as Waters of the United States, or WOTUS.

The rule does not include all interstate waters. Instead, it ties protection to whether a waterway was traditionally navigable for commerce. This issue could leave the Walker River, which rises in northern California and runs through western Nevada, without federal protection, Carr said.

State regulators, she added, are “looking very closely at the Walker River and what its ultimate jurisdictional status might be,” but Carr noted that it would still be protected under state law.

With a more narrow WOTUS definition, environmentalists are concerned about shifting much of the responsibility for protecting water quality to state agencies, with often limited resources.

“If you're Nevada and all of the sudden 99 percent of streams, rivers and washes are [not] protected, that’s a huge assumption of responsibility that you’re going to have to undertake,” said Brett Hartl, government affairs director for the Center for Biological Diversity.

In many cases, federal funding for state-led compliance is tied to the amount of water, within a state boundary, that is protected by the Clean Water Act. As federal protection is removed for mapped streams, wetlands and other rivers, it could translate to less federal funding.

Carr said NDEP has raised this concern with EPA, which has said that it will keep funding stable in the short-term. She said the state agency will be working with EPA on the long-term formula.

Where pollution comes from

The state regularly evaluates the conditions of federally-protected waters in a triennial report. That document examines whether protected waters meet the standards of “beneficial use” for aquatic life, fish consumption, irrigation, municipal supply, recreation and livestock watering.

In the most recent assessment, published in April, NDEP concluded that only about 30 percent of roughly 700 waterbodies met that threshold. NDEP reported that there was “insufficient” data to draw conclusions about 34 percent of the waterbodies examined. And about 35 percent of waters were not meeting the standards established for at least one of the potential uses.

The public review, however, only provides a snapshot of water quality in the state. It focuses on Nevada’s heavily used rivers. But the report does not include information for ephemeral and intermittent streams, which account for about 90 percent of the state’s waterways.

And of the waterbodies assessed, the report assessed about 43 percent of year-round streams, 69 percent of lakes and reservoirs and about 41 percent of fresh wetlands.

Across the state, the leading cause of impaired water is elevated phosphorus levels, which can be caused by fertilizers, agriculture, stormwater and the disposal of home items.

Phosphorus accounts for about 21 percent of impaired water. Temperature accounts for another roughly 13 percent, what NDEP said could result from the destruction of shaded vegetation around a waterway.

The majority of impaired waters — about 57 percent — failed to meet standards set out for the protection of aquatic life. About 16 percent do not meet standards for recreations with contact.

This pollution is not always a result of direct discharges into streams. Many of the impairments noted in the report stem from what is known as nonpoint source pollution.

That type of pollution arises when indirect sources, such as runoff or rainfall pick up chemicals and nutrients, carrying them to a lake or a river. That makes nonpoint source pollution often challenging to regulate.

Comba said the state has worked on addressing nonpoint source pollution through streambank restoration, moving cattle to specific access points and educating the general public. The state has also developed 55 site-specific plans, approved by the EPA, that establish a maximum level of pollutants that can be discharged to a river or lake and still meet water quality standards.

The state is also working to update it’s antidegradation standards, which require waterways to be protected in accordance with their natural quality, even if it is above beneficial use standards.

But resources are limited.

“Significant time and funding are needed to address impaired waters; this means that the pace of developing [maximum pollutant levels], watershed management plans, and alternative approaches may be slowed by staffing and budget constraints,” the report said.

Pollution only tells one side of the story.

Development — filling wetlands or paving over small streams — can also degrade waterways. That’s why many environmental groups want to see wetlands and small streams, especially in Nevada, to be explicitly included in a broad definition of what the Clean Water Act protects.

Hartl, with the Center for Biological Diversity, notes that it has long been difficult to determine whether or not an ephemeral or intermittent stream fell under protection of the Clean Water Act.

“No one knows the answer until someone decides to pave over it,” he said.

For years, activists, politicians and the courts have argued over the scope of the Clean Water Act, specifically where the state’s jurisdiction begins and federal jurisdiction ends.

In 2015, the Obama administration broadened the scope of the Clean Water Act, applying it to wetlands and seasonal streams. The move came in response to significant confusion over a 2006 Supreme Court case that produced no majority opinion and five separate opinions.

The Obama administration’s rule started a new round of criticism and litigation, including from then-Gov. Brian Sandoval and Attorney General Adam Laxalt. Joining 12 other states, Laxalt sued, arguing that the Obama rule was an example of “unreasonable federal overreach.”

After Trump was elected, he began the process of repealing and replacing the 2015 rule. Where Obama’s rulemaking relied on Justice Anthony Kennedy’s interpretation of the law, the Trump administration turned to a much narrower interpretation written by Justice Antonin Scalia.

Since the final rule was released in April, environmental groups and more than a dozen states have sued the Trump administration, kickstarting what is likely to be another round of lawsuits and court guidance. One of the litigants is Environment America, which has a Nevada chapter.

Levi Kamolnick, state director for Environment Nevada, said that water does not abide by state borders. He worries lax regulation of seasonal streams in one state could affect Nevada. For that reason, Kamolnick said seasonal streams should be protected by the federal government.

According to an EPA analysis completed in 2009, about 27,000 Nevadans were served by drinking water systems that relied on intermittent, ephemeral or headwater streams, he added.

"We absolutely think that the Trump Dirty Water Rule runs counter to the intent of the Clean Water Act,” Kamolnick said. “We believe strongly that any moves to exclude non-permanent water sources [from federal protection] is detrimental to the health of Nevadans."