Fate of Thacker Pass lithium mine permit to be decided soon, with 1872 Mining Law a focus 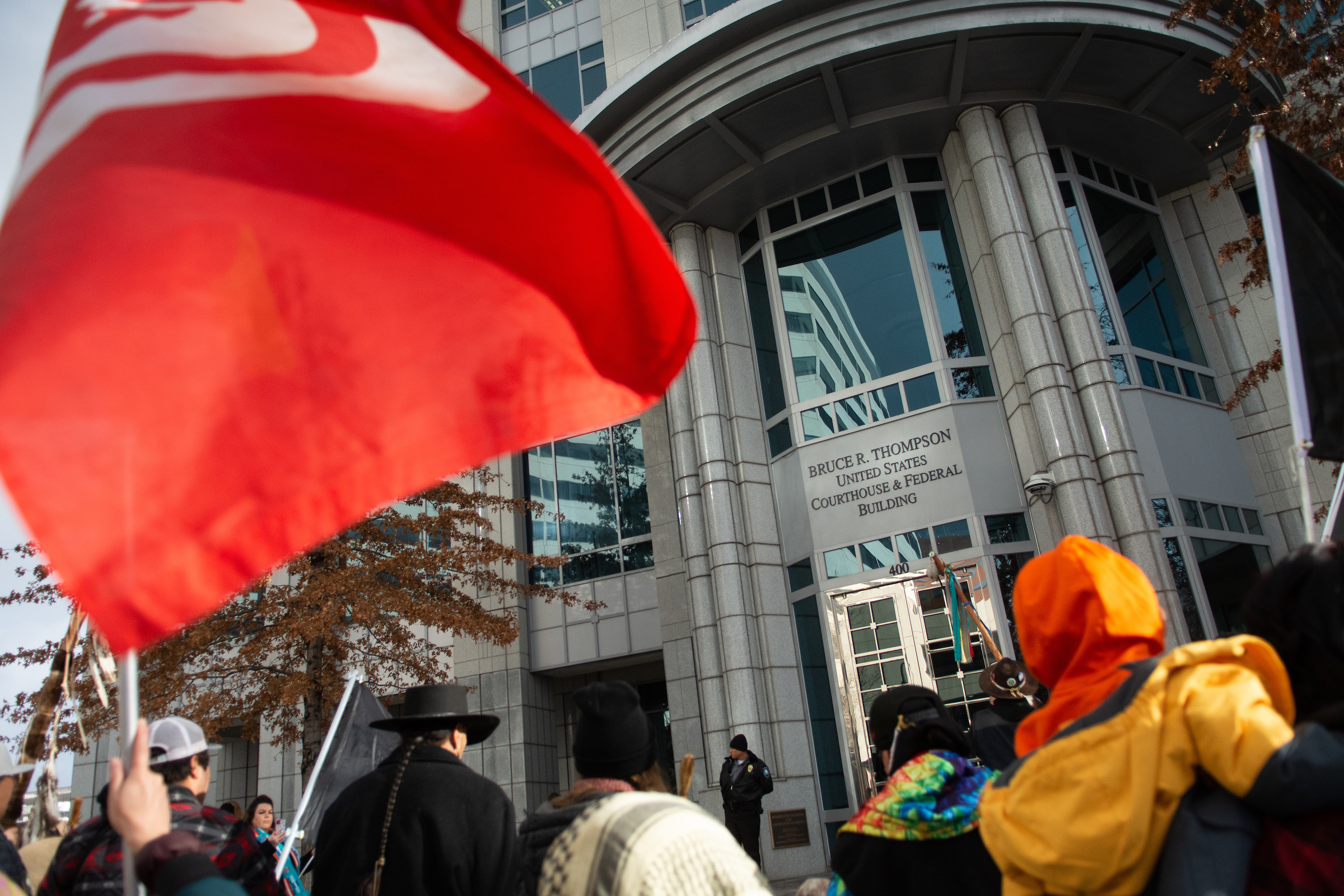 The interpretation of a 150-year-old mining law could be a part of whether a U.S. District Court judge upholds the federal government’s approval of a massive lithium mine — a project that has faced challenges from a local rancher, environmental groups and Native American tribes.

In legal briefs over the past two years, the mine’s opponents have challenged federal permitting of the planned Thacker Pass mine north of Winnemucca. Federal land managers, they argued, fast-tracked the project and did not adequately consider a number of issues in its environmental review — the mine’s footprint on wildlife habitat, groundwater, air quality and Indigenous sites.

On Thursday, the project’s opponents had their first opportunity to fully lay out the merits of their case challenging the mine’s federal environmental review. Yet much of the arguments centered around a broader question that has wide-ranging implications for mines across the West: What is the federal government’s proper role when approving and regulating mines on public land?

Policymakers from across the state, and the country, have pushed for developing Thacker Pass, touted as the largest known lithium source in the United States, arguing that it is needed to help fuel an economy less reliant on fossil fuels and more on lithium-ion batteries. Although the plan was approved at the end of the Trump administration, the Biden White House has continued to focus on procuring a domestic supply of “critical minerals,” and has defended the mine in court.

As the hearing began, more than 100 demonstrators gathered in wintery weather outside of the federal courthouse in downtown Reno. They had marched about one-and-a-half miles from the Reno-Sparks Indian Colony to the courthouse in protest of the mine’s footprint on historical Indigenous land. The Reno-Sparks Indian Colony and the Burns Paiute Tribe are parties in the case.

“Our lands are being desecrated — our water and our way of life,” said Arlan Melendez, the chairman of the Reno-Sparks Indian Colony. “Regardless of what the judge’s decision may be today, it’s not the end. It’s the beginning. This is a fight that’s going to go on.”

Debate over the Thacker Pass mine has become a focal point in a national conversation about how the administration should balance sometimes competing priorities — bolstering the supply chain for an energy transition away from fossil fuels, protecting biodiversity and advocating for environmental justice.

At several points Thursday, the hearing departed from a strict legal discussion and into policy questions about the need for lithium. Laura Granier, an attorney for Lithium Nevada Corporation, the company developing the mine, said the Thacker Pass deposit is “desperately needed,” both for national security and to address global climate change. But Roger Flynn, the environmental groups’ attorney, said building it should not “violate fundamental public land and mining laws.”

These issues are not irrelevant to the outcome of the case. In considering whether to remand or vacate the federal government’s permit, the court could potentially weigh factors outside of the administrative record, such as broad public policy goals.

But Chief Judge Miranda M. Du’s line of questioning centered on a recent appellate decision, and its applicability to the Thacker Pass litigation. That decision, known as the Rosemont case, set a potential precedent to limit the breadth of the Mining Law of 1872.

The 1872 Mining Law, signed by President Ulysses S. Grant, sets the framework for companies seeking to extract minerals on public land managed by the federal government. The rules have been updated with other laws and regulations since, but they are generally interpreted as giving mining companies leeway to explore and develop projects occupying large areas of public land.

Last year, however, the 9th Circuit Court of Appeals struck the U.S. Forest Service’s approval of the Rosemont copper mine in Arizona. The court’s order reasoned that the federal agency had made an “improper assumption” that the project had valid mining claims to occupy an area of land — about 2,800 acres — for its waste-rock facilities, when the validity had not been proven.

Ninth Circuit Judge William Fletcher wrote that the agency “gave to Rosemont, essentially free of charge, the right to permanently occupy 2,447 acres of National Forest land with 1.9 billion tons of its waste rock based on an improper assumption” that the federal mining law applied.

Environmental groups argued that similar circumstances exist in the Thacker Pass case, with the company seeking to occupy about 1,300 acres of land, not for building its pit — required to tap its mining rights — but for storing waste rock and tailings relying on mining claims that the federal government had not yet shown to be valid. Nonetheless, federal land managers relied on those claims, for the roughly 1,300 acres, to exempt the project from certain land use plans, including rules meant to protect wildlife like the Greater sage-grouse, an imperiled bird.

Representing Western Watersheds Project, Great Basin Resource Watch, Basin and Range Watch and Wildlands Defense, Flynn argued that the Rosemont decision applied to this case, and as a result, federal land managers erred in their assumptions that those claims were valid.

Both the federal government’s lawyer, Leilani Doktor, and Granier argued that there were major differences between the Rosemont decision and the Thacker Pass case. For one, Thacker Pass was approved by the U.S. Bureau of Land Management, a federal agency with different rules.

“Rosemont is not controlling in this case because we are operating under a different regulatory regime,” Doktor argued, noting that the federal agency followed its internal mining regulations.

The company urged the court not to vacate the permit, especially given the demand for lithium, and argued that mine developers are concerned about any further delays starting construction.

Plaintiffs in the case have challenged the mine on several other grounds, alleging that federal land managers did not adequately consider air quality standards, groundwater concerns or fully evaluate the potential impact on wildlife, such as Greater sage-grouse and pronghorn antelope.

On Thursday, attorneys for the Reno-Sparks Indian Colony and the Burns Paiute Tribe argued that federal land managers did not conduct government-to-government consultation with them, when in fact they had a responsibility to do so. In the environmental review process, federal land managers did consult with three tribal governments, relying on geographic proximity, affirmative expressions of interest and historic ties to the area as factors for guiding its consultation plans.

“Tribes still exist,” he said. “And they care about this area. That's why we're here.”

Du said she will rule on the case in the “next couple of months.”

After the hearing Friday, Lithium Nevada CEO and president Jon Evans said the company was moving forward and that “yesterday's hearing provided an opportunity to reaffirm our confidence that the permitting process for Thacker Pass was conducted thoroughly and responsibly.”

In addition to the court challenges, residents in the communities near Thacker Pass — Orovada, Kings River Valley and McDermitt — have expressed concerns about the project impact on local agricultural operations. Members of the Fort McDermitt Paiute and Shoshone Tribe also voiced concerns. The tribe’s reservation, near the town of McDermitt, is north of the Thacker Pass site.

Du twice denied motions from mine opponents who were seeking a preliminary injunction to halt an anthropological survey required by federal land managers. The court denied one motion after evidence was presented documenting historical accounts of an 1865 massacre in the area. The area is known as Peehee Mu'huh, or “rotten moon” in Paiute — a reference to the massacre.

Over the past two years, the mining company has worked to make inroads with the community and address concerns, ranging from traffic to noise and disruptions. Last year, Lithium Nevada announced it entered into a community benefits agreement with the Fort McDermitt Paiute and Shoshone Tribe, which includes the construction of a new community center. Lithium Nevada has also pledged to help build a new K-8 school in Orovada and invest in road improvements.

Lithium Nevada also opened a new technical development and research center in Reno over the summer. The unveiling was attended by state environmental and political officials, including former Gov. Steve Sisolak, and members of the Fort McDermitt Paiute and Shoshone Tribe.

Last November, Lithium Americas’ President of North American Operations Alexi Zawadzki wrote in a newsletter that the company, which oversees Lithium Nevada, “remains committed to working with our local communities, focusing on projects that increase the overall quality of life and workforce development efforts while making progress towards producing battery-quality lithium to aid in the national energy transition and electrification of our transportation industry.”

In the morning on Thursday, about two hours before the hearing began, demonstrators marched up Mill Street toward the courthouse. Members of the Reno-Sparks Indian Colony were joined by tribal members from the San Carlos Apache Tribe who oppose an Arizona copper mine at Oak Flat, a space many hold sacred. To the beat of drums, they chanted and gave speeches.

“You can’t mine your way out of the climate crisis,” some demonstrators chanted.

Michon Eben, who manages the cultural resource program for the Reno-Sparks Indian Colony and serves as the tribal historic preservation officer, helped to organize the protest. She said that it was an important opportunity for a broad coalition of tribal members to come together.

“All the Indigenous tribes are going through what we’re going through here,” Eben said during the demonstration Thursday. “If it’s not a mining company, it’s a pipeline company. If it’s not a pipeline company, it's an electric company. The list goes on and on and on. And all we do as Americans is just keep building and getting bigger and bigger. We're not solving the problem.”

Update on Monday, Jan. 9 at 8:18 a.m.: A previous version of this story referred to 9th Circuit Judge William Fletcher as a justice. The story has been updated to reflect Judge Fletcher's title.