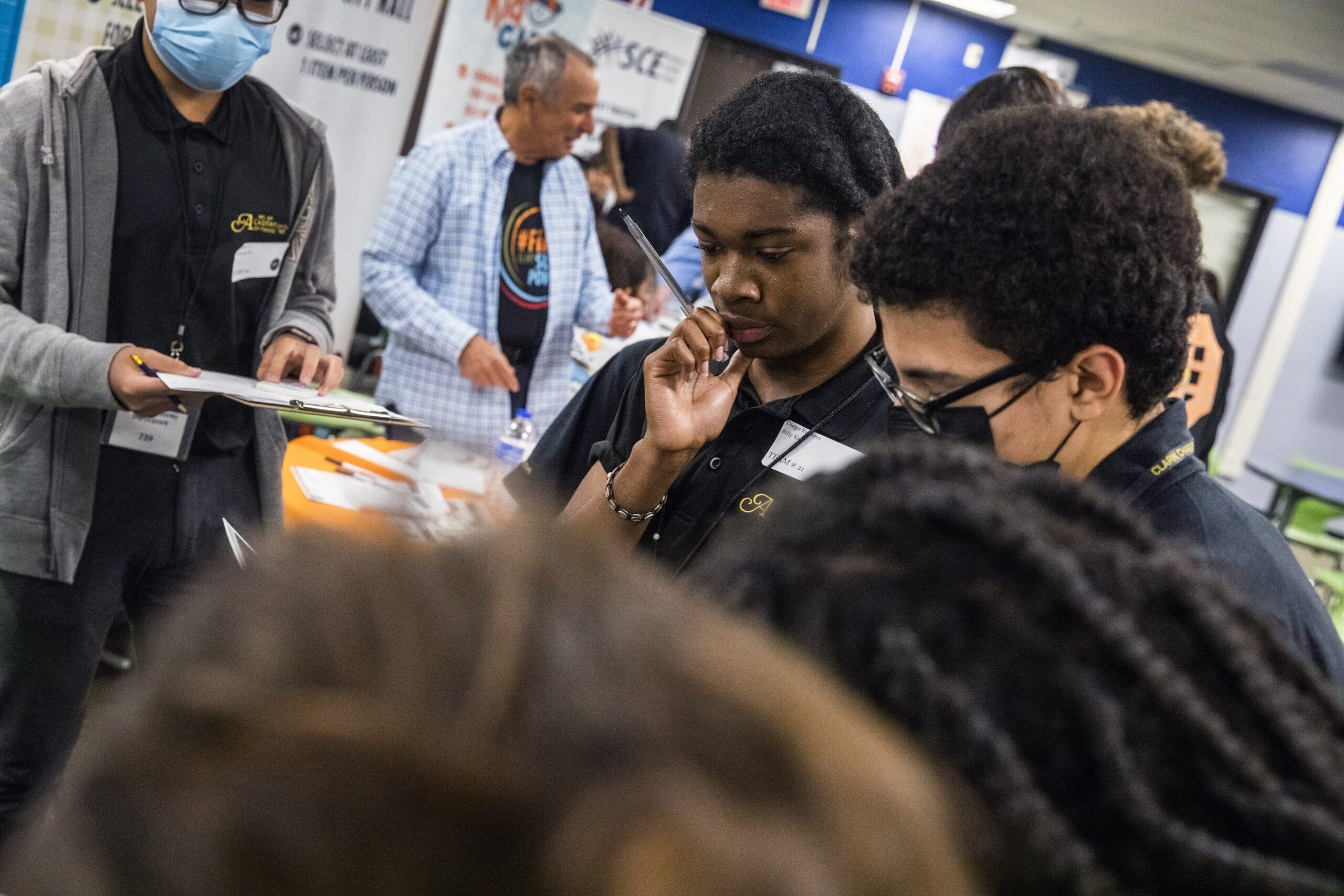 Billy Banks and Diego Reynoso don’t have much personal experience balancing a budget, managing credit card debt or stretching their money to make it work for a family of three.

But the freshman and junior at Clark High School recently practiced those skills as part of a real-world simulation by the Center for Financial Empowerment, a nonprofit that aims to break generational poverty by exposing students to financial education. The organization’s Mad City Money event gives teens a taste of the responsibilities they will face as adults.

Nevada public schools are required to teach financial literacy to students under a 2017 state law. At Clark High School, students learn basic financial skills as well as more advanced business concepts such as marketing and entrepreneurship as part of its Academy of Finance.

The Center for Financial Empowerment also hosts financial literacy workshops and classes, but Director Abby Ulm said that type of instruction isn't as engaging and eye-opening as the Mad City Money activity held at Clark High School’s library. Ulm said she enjoys seeing the students have “light bulb moments” when they connect something they learned during the activity with their own family life.

“A lot of them will say, ‘I really appreciate my parents more now that I know what they have to go through to make ends meet for me,’” she said. “Some of those lessons just don't come across in a classroom type of environment. So that's really why we wanted to do this and invest, you know, in expanding this and doing it as much as we can.”

The Center for Financial Empowerment, founded by SCE Federal Credit Union, puts on 15 to 25 of these events each year at Clark County and Southern California schools, especially ones serving students in low-income communities.

“We're always wanting to do our programs for Title I schools for students that are more disadvantaged just because they need the help more,” Ulm said. “Students in more affluent families have more resources at their disposal to learn this.”

“Life is hard and it's going to get harder as inflation continues to rise,” Ulm said. “Families are struggling trying to make ends meet. So the more resources we can give them and education we can give them to show them how they can make it through those things and make better choices, the better it is for them.”

It’s all information that could come in handy given financial constraints affecting many young families. The average U.S. household with student debt owes $57,520, according to a 2020 household debt study by NerdWallet, a personal finance company. Meanwhile, Americans under the age of 35 have an average savings account balance of $11,200, according to a 2019 Survey of Consumer Finance by the Federal Reserve.

The activity began by pairing students up and assigning them a fictionalized life – complete with a child, occupations and wages. In Billy and Diego’s case, they received a combined monthly gross income of $4,880, which got reduced to about $4,000 after they deducted their student loan payment, taxes and medical insurance fee. They also got stuck with credit card debt of nearly $5,500.

“That’s going to be a problem,” Billy said, while Diego joked that the source of their debt was probably their 9-month-old son, Matthew.

Then the students visited tables set up around the library. Each table represented different life necessities, such as clothing, housing, child care and home supplies. The objective was for students to purchase whatever they needed for their imaginary households without running out of money.

The catch: Each table offered products at different price ranges, tempting students to splurge. For example, at the clothing table, students could purchase designer brand items and frequent haircuts, or save money by picking less frequent haircuts and shopping for clothes at discount stores or thrift shops. The volunteers running the tables were told to try to persuade the students to choose more expensive options to simulate the temptations the teens might face in the real world.

Marshall Goldsmith, who has volunteered for Mad City Money events in the past, said a team came by his table and wanted to go overboard by splurging on a TV, surround sound system, a video game console and a motorcycle, so Goldsmith decided to break out of character to give them friendly financial advice.

“Basically the way they were going, they would have no money for most important things here like housing and food,” Goldsmith said. “They don’t realize that, but I also know that they’re kids. So I was like, ‘You gotta think a little better.’”

Over the years, Ulm said she has found that students from low-income communities tend to know how to make smart money choices because their families already have to be frugal, but the activity still helps expose them to the realities of high housing costs and other expensive necessities such as diapers and baby formula.

And no, Ulm joked, students aren’t allowed to put their child up for adoption to get out of paying those things.

Pairing students with a partner is an intentional part of the activity, Ulm said, because someday, the teens may have to live and cooperate with a spouse, domestic partner, coparent or another family member, and part of the lesson is about teaching them how to negotiate, compromise and work together.

During the event, students also confronted unexpected life events or emergency situations. One team got hit with a medical bill that put them in the red, forcing them to downgrade the housing and child care options so their budget could be balanced again. About halfway through the event, Ulm informed all students who hadn’t gone to the SCE Credit Union table to pay their minimum credit card debt payment that they would have to pay a $35 late fee.

The point of Mad City Money’s elaborate scenarios is to expose students to all these different, and sometimes unfair, life events that could come their way so they can be better prepared for them as adults, Ulm said. She heard from former students who return to Mad City as volunteers that they are saving on a regular basis, setting aside money for emergencies and not taking out credit cards.

“If you think about it, at this age, just getting this experience put them ahead of the game,” Ulm said.

After the event, the students told Ulm it taught them that being an adult sucks, to pay their fees on time and always read the fine print.

But Junior Brandon Bui said he thought the activity was a breeze, and it gave him a chance to think more in-depth about some of the lessons he has learned in class and will likely need in his future. He and his partner finished with about $70 to spare.

“I learned not to spend too much,” Brandon said. “We got a medium apartment. We do have a kid, so we have to take care of him.”

For Billy and Diego, the event showed them they still had more to learn before launching into the next stage of life and shouldering more financial responsibilities..