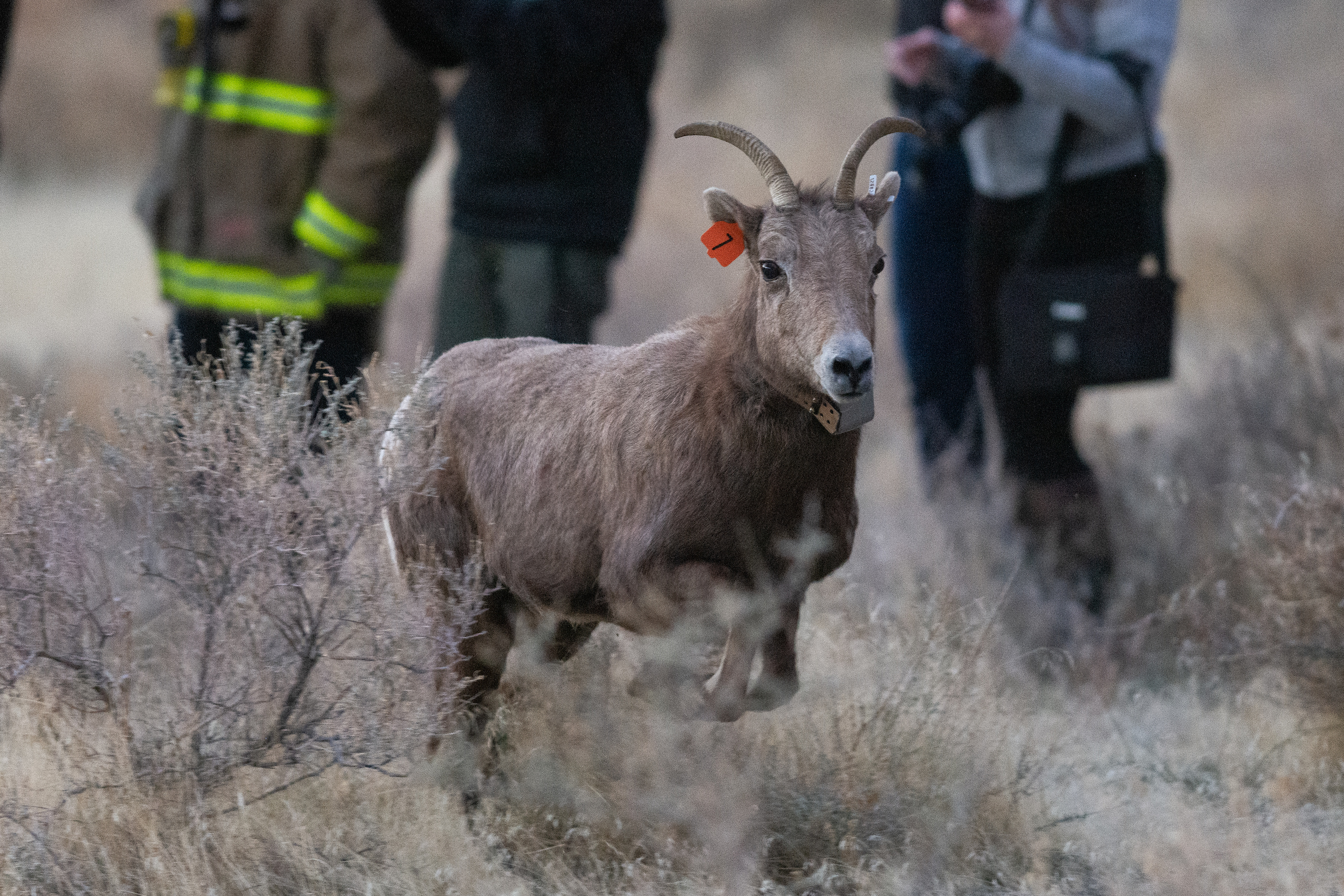 Tribal members, conservationists and students, bundled up in thick coats and beanies, gathered in two rows fanning out from transport trailers to watch the release into tribal land, an area usually closed to the public. Bighorn sheep, separated into two trailers, rushed out in waves.

First came the ewes. The rams came next. As the sun went down behind Pyramid Lake, more than 20 sheep leaped off transport trailers and sprinted back to their historic range.

Reintroducing bighorn sheep to the Lake Range “was something that we needed to do,” said Alan Mandell, the vice chairman of the Pyramid Lake Paiute Tribe. Once numerous on the peaks above Pyramid Lake, bighorn sheep have not been seen in the mountains for about a century.

For decades, tribal officials and conservationists worked with state wildlife managers to figure out a way to reintroduce bighorn sheep to the Lake Range, which rises east of the desert lake. Bighorn sheep all but disappeared on the tribe's land — and across the West — in the early 1900s as Western expansion decimated their ranks through disease and overhunting.

With the reintroduction, on a brisk January evening last week, that began to change.

“It was such a magnificent moment because the smiles on their faces — their respect, their worship, their appreciation of these animals,” said Larry Johnson, who leads Nevada’s Coalition for Wildlife. “I wish we could somehow transfer that respect and awe of wildlife to the general public of Nevada and garner the kind of support that was exhibited on the reservation."

Now the sheep are heading north. Biologists believe that the bighorn sheep will repopulate in the area around Hell’s Kitchen Canyon. It’s on Pyramid Lake’s northeast shore and it leads up to rocky terrain. There are natural water sources and good vegetation at high elevations. And the rugged terrain provides plenty of escape routes.

“Mountain lions aren’t as quick on the rocks,” said Emily Hagler, a biologist for the tribe.

The release earlier this month was a daylong effort years in the making. Before the sheep could be let out to roam free, biologists and other state officials needed to capture them.

Around 4:45 a.m. on Jan. 13, long before the sun rose and hundreds of miles away from the reservation near Reno, a team of tribal leaders and state wildlife managers left Winnemucca. They headed to a staging area in the Sheep Creek Range northeast of Battle Mountain.

“We got there just as the sun was rising,” Hagler said in an interview recounting the day.

Soon after, a helicopter crew took off. The crew was charged with capturing bighorn sheep using a net gun and flying them back to the staging area. There, they were tagged with location monitors, and an NDOW veterinarian examined their vital signs, a critical step.

The stress of a capture can drive up body temperatures in sheep — a possible sign of “capture myopathy,” a disease that results in muscle damage and is often deadly.

“We had some hot temperatures that we didn't like to see on the animals,” Mike Cox, a bighorn staff biologist with the Nevada Department of Wildlife (NDOW), said in an interview this week.

Cox has worked on dozens of captures, and rarely misses one. He said that he once showed up to a capture on crutches and a broken leg. And in any given year, Cox said NDOW might capture about 150 bighorn sheep, checking them for disease or relocating sheep to repopulate historic ranges. In that sense, the capture last week was a routine operation for wildlife officials.

Then he stopped himself: “But it’s more than just another one.”

It marked the first time that the state agency has released bighorn sheep on tribal land in Nevada. For the tribe, it was another step in recovering wildlife lost to Western expansion.

“We didn't do nice things to the land during the settlement of the West,” Johnson said.

There is a sparse written record of bighorn sheep at Pyramid Lake. But sheep are documented on petroglyphs dating back thousands of years. Coming upon Pyramid Lake, the explorer John C. Frémont noted “herds of mountain sheep” in an 1844 journal entry. Mandell said that some bighorn sheep bones have been found in old fire pits. Traditionally, the sheep provided the tribe with sustenance, Hagler said. Horns were used in ceremony and hides were used for clothes.

That was until they vanished from the landscape. Sheep were not the only culturally-connected wildlife extirpated by Western settlement. Mandell described the bighorn sheep release as fitting into a broader recovery, especially around the tribe’s efforts to restore native fish species.

In the early 1900s, the federal government helped construct a dam on the Truckee River to bring irrigation water to nearby Fallon. But doing so diverted water away from Pyramid Lake, disrupting fish habitats and access to spawning grounds for the cui-ui and the cutthroat trout, two fish species that tribal members relied on for food and to support their local economy.

After decades, cutthroat trout were eventually reintroduced to Pyramid Lake, translocated from populations of fish at Summit Lake in Humboldt County.

“This is just another species that we’ve re-introduced and will manage,” Mandell said.

By mid-afternoon, after the trailers left the staging area near Battle Mountain, tribal members gathered at a gym on the reservation for a potluck. Around 3:30 p.m., they left in a long line of vehicles caravanning up a road around the east side of the lake and toward the release area.

After the trailers eventually arrived as the sun began to set, tribal member Terrence Wright led the group in a prayer. Wright said it was neat to see a project that would bridge generations.

“I told my grandson,” he said after the release, “one day you can tell your grandkids that you helped bring them down. It’s really neat because a lot of the things we do are for our kids.”

The release began, and sheep started darting out of the trailers.

And then an ewe stumbled out of the trailer and fell onto the ground, as the other ewes continued running away in the distance. The crowd grew silent. NDOW officials rushed around the ewe. She was diagnosed with capture myopathy, suffering damage to her back leg and hip, Cox said. The NDOW team huddled around the sheep long after the only light came from car headlights.

By the next morning, the ewe had passed away.

The effects of capture myopathy can last about two weeks. Another setback: Six days after the release, a ram passed away, said Cox, who had not yet seen the results of the necropsy.

Although predators remain a threat to the sheep, the goal now will be to grow the population into the hundreds over the next decade. Depending on habitat conditions, Cox said the 20 remaining sheep could increase to 30 next year, reaching about 100 in six to seven years. On the phone, Cox sounded hopeful. The reservation’s habitat, he said, was “tailor-made” for sheep.

The effort to protect and preserve the population will be led by the tribe. Hagler said that serving as the lead agency was significant, “an expression of the tribe's sovereign rights to self-govern.”

Since the release, she has watched the bighorn sheep disperse into the range. She said they are herding up and heading north toward the rocky areas that should protect them from lions.

“A few haven't quite found their friends yet,” she said. “But they should find them soon.”