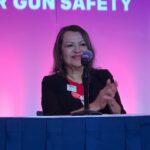 On September 21, 1980, my 27-year-old brother, Louie Pacheco, took his own life with a gun that did not belong to him. Growing up, our family did not keep guns, but in our Latino community, access to firearms was prevalent. And in Louie’s case, he got the gun from a friend.

The weeks after Louie’s death are forever a blur. And in the years that followed, I went through a rollercoaster of emotions. I railed in anger; I withdrew in despair; and finally, I decided I had to speak out against gun violence and help others in order to keep my brother’s memory alive. For more than 20 years I have been a family therapist working with troubled children and adolescents, particularly in the Latino community.

During Latino Heritage Month we have an opportunity to recognize and celebrate the histories, cultures, and contributions of Latinos in the United States. But as Latinos, we also must grapple this month – and every month – with a public health crisis that weighs heavily on our hearts and our community: gun violence.

As a therapist, as well as a school board trustee for the fifth-largest school district in the nation, I have studied and worked with countless children and adolescents in the Latino community who have either directly been affected or know someone who has been directly affected by gun violence.

What is clear to me –– through my professional work and through my own research on gun violence and Latinos –– is that our community is affected by this epidemic at disproportionately high levels. Still, after years of congressional disinvestment in gun violence research, we have only a limited understanding of the full toll of gun violence, including in Latino communities.

According to Everytown research, aggressive federal immigration policies have had a chilling effect on Latinos’ willingness to talk to police or report violence. There are also cultural elements, shared by some in our community, that dissuade Latinos from openly discussing gun violence. In the years after Louie took his life, our family – particularly the men – suppressed discussion of the subject. My two sisters and I talked among ourselves, but I was the only one who sought therapy. I was never able to get anyone in my family to speak publicly about Louie’s suicide. This is not uncommon in Hispanic households. That is why I chose to become a family therapist –– to help those with the pain that is often suppressed within the Latino community when the trauma of gun violence is involved.

While there is so much more we need to learn in order to fully address and understand the total impact that gun violence has on the Latino community, there are a number of steps state and local leaders across the country can take to protect Latinos from gun violence.

These include funding community-based violence intervention programs for individuals who are at the highest risk of shooting someone or being shot, funding culturally competent and accessible mental health services for those impacted by gun violence, and implementing policies that reduce police gun violence. According to research, Latinos are twice as likely to be killed in a gun homicide as white people and more likely to be fatally shot by police. Law enforcement agencies should have strong guardrails in place in cases where police may use force against civilians, ensure police are held accountable when force is used and prioritize de-escalation, dignity, and respect.

Policymakers also should prohibit all people convicted of hate crimes from having guns. While a felony conviction prohibits gun possession under federal law, a hate crime misdemeanor conviction does not. Latinos in the U.S. have historically been affected by discriminatory policies and attitudes, and have been victimized by hate-motivated violence. Research analyzed by Everytown found that an increase in Hispanic immigration in recent years has also been associated with an increase in anti-Hispanic hate crimes. Between 2011 and 2015, Hispanic people experienced a higher rate of violent hate crime victimization than both white and Black people. In recent years some of the nation’s deadliest mass shootings have occurred in the heart of Latino communities, including El Paso, Las Vegas, Orlando, and Parkland.

Lastly, passing an extreme risk law –– which Nevada passed in 2019 –– allows family members and law enforcement to ask a judge for an order to temporarily remove guns from a person who poses a serious risk of injuring others (or themselves) with a gun. Extreme risk laws are one of the most powerful tools for preventing mass shootings, school shootings, and firearm suicides.

Sharing my story isn’t easy. But as a Latina woman in America, I feel a sense of urgency to do so because I know that my community is hurting. We have a responsibility to take care of our Latino population. During this year’s Latino Heritage Month, we are demanding that our state and local leaders recognize the disproportionate impact gun violence has on Latinos and work to help end this type of violence in our communities. This crisis demands action.

Linda Cavazos is a volunteer with the Nevada chapter of Moms Demand Action and a survivor fellow with the Everytown Survivor Network. On September 21, 1980, Linda’s younger brother, Louie Pacheco, took his own life with a gun that did not belong to him in Mesa, Arizona. Linda is also a trustee with the Clark County School District.