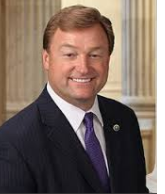 GOP Sen. Dean Heller, labeled a “Trump MVP” when the list first came out, remains atop the Trump fealty rankings from the FiveThirtyEight site.

Heller and Colorado’s Cory Gardner are both 100 percenters so far -- Nevada’s senior senator has voted for all of the president’s Cabinet picks, although the votes used also include a few policy matters. Gardner is a nose ahead of Heller because while both states went for Hillary Clinton, the difference between the Colorado victory margin and Nevada’s accounts for the slight advantage.

Junior Sen. Catherine Cortez Masto, a Democrat, is in the bottom quarter of senators, a 33.3 percenter. That’s 26 percent below where she would be expected to be based on the site’s formulation, but the Democratic senator has voted for several of Trump’s Cabinet picks.

In the House, GOP Rep. Mark Amodei is a 100 percenter, too, so far, while Democratic Reps. Ruben Kihuen, Jacky Rosen and Dina Titus are all zero percenters.

The site is overseen by data guru Nate Silver, and named for the number of total electoral votes.