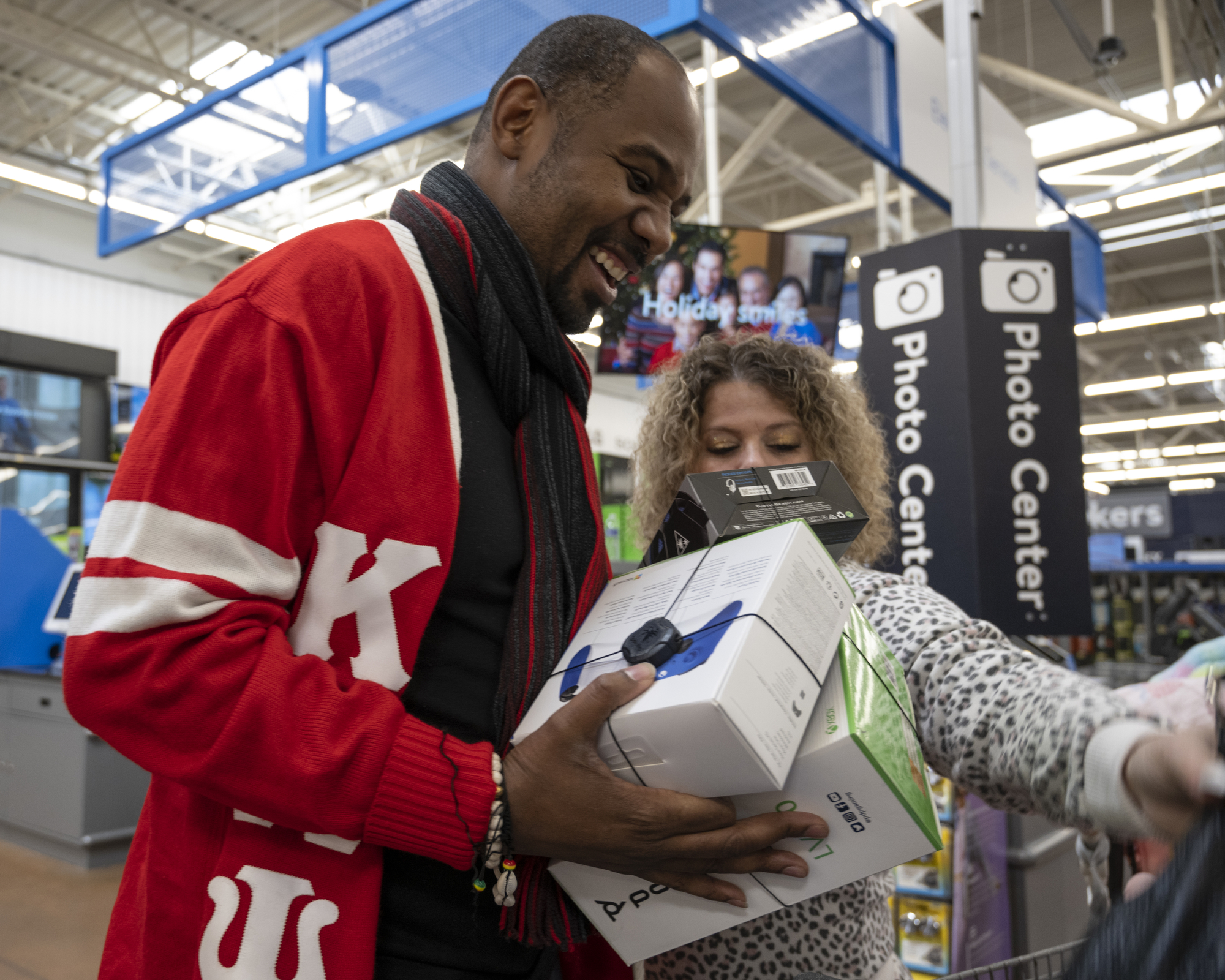 After helping more than 850 families with Christmas gifts over the past decade and inspiring similar efforts elsewhere in the country, members of the Las Vegas chapter of historically Black fraternity Kappa Alpha Psi held their 11th annual Shop with a Kappa giveaway over the weekend to bring holiday cheer and fight against food insecurity.

Children received $100 gift cards and food packages including eggs, granola and lunch snacks to help families over the break.

“We know that for every gift that we give, for every smile that we put on these kids’ faces, we know that that's one more household that won't be stressed during this holiday season,” said Clark County Commissioner William McCurdy, a member of Kappa Alpha Psi who represents District D, where the event was held.

This year, McCurdy provided a greeting, and Pastor Clayton Moore of Second Baptist Church led a prayer, while children and families stood out in the parking lot at Super Walmart on the Westside of Las Vegas awaiting their chance to shop with a member of the Las Vegas Alumni Chapter of Kappa Alpha Psi Fraternity, Inc.

The event featured music played by a DJ, snacks, activities and local fraternity and sorority members dressed in red, white and Greek regalia. Families were invited to participate in the giveaway by local organizations such as The Diamond Foundation (a charity organization within Kappa Alpha Psi devoted to youth scholarship), Nevada Natives (an Indigenous nonprofit) and New Era Las Vegas (a national grassroots organization started in Detroit, Michigan), or selected through an application process.

“We know with inflation and high unemployment rates, people are deciding if they're going to be able to buy food or buy toys for their kids for Christmas,” said Sebern Coleman, the spokesperson and chair of Shop with a Kappa Las Vegas. “[This year] we're like, well, why not do both?”

The annual “Shop with a Kappa” event, which takes place around the country, was started by the Las Vegas Kappa alumni chapter in 2011 by member and former police officer Rod O’Neal.

O’Neal said he mirrored the event after the “Shop with a Cop” events that sprang up in the northeast valley during his time of service and felt like there needed to be the same service in neighborhoods that are predominantly Black. He said it is important for Black professionals to serve young Black children during the holiday.

“I used to participate in the Shop with the Cop [event],” O’Neal said. “But when you look at the program, I wouldn't see us represented. I would see four or five Black kids and to me it wasn’t enough.”

O’Neal and Coleman said the first events started with about 22 children from the 89106 ZIP code, but the event has since diversified over the years, adding children and families from all over the Las Vegas valley. It started in an area where the average median income is $25,000 a year, half of the state's median household income.

“A lot of our folks who are in the fraternity grew up in the [89106] area,” Coleman said. “A lot of the reason that they even wanted to get into the fraternity — to begin with — was to be able to give back to the community.”

O’Neal said chapters across the country participate in Shop with a Kappa, including in Anchorage, Alaska, Tacoma, Washington, Chicago, Illinois, and Miami, Florida, to name a few.

“And it all stems from right here in Las Vegas,” he said.

Local Kappas have been the largest donors to the Las Vegas giveaway. Other large donors include the Nevada State Treasurer’s Office, which gave $2,000 to the cause, M.R. Whitsett Inc., a restaurant franchise inside Harry Reid International Airport that gave $3,000 worth of food and Las Vegas Blackbook, which gave $5,000.

On Saturday, new parents Janene Newell, 22, and Frederick Bailey, 20, waited in line with their 3-month-old baby Sayori Bailey for a $100 gift card. They said the help will provide a boost for their budget for essentials such as diapers and other necessities.

“She likes to pee a lot,” Bailey said.

The event included more than 200 people, including state prosecutors, education professionals and retired police officers, who helped kick off the season of giving days before Christmas. Children came from schools such as Matt Kelly Elementary and Kermit R. Booker Elementary, and organizations such as the Boys and Girls Club or Boys Town, representing the spaces touched by the philanthropic arm of the fraternity.

Kappa Alpha Psi has a long history of service in the Las Vegas valley, with a legacy of Black firsts stemming from the fraternity members, starting with Addeliar “Dell” Guy, who became the first Black district court judge in the state in 1957, to Jason Frierson, who became the first Black United States Attorney of Nevada in 2022. The Las Vegas Alumni Chapter was established in 1964.

“This is community service at the highest level,” O’Neal said. “A lot of times you give to other civic organizations, whether it be the Red Cross or anything else — you’re making a donation. But you can come here, and this is where the rubber meets the road.”

According to Coleman, some families come back each year and the organization gets to watch children grow as they participate. Sometimes, the children join the organization’s youth group and then continue with the group in college to pay it forward as future alumni.

“At the end of it, we want folks to contribute to society successfully,” Coleman said.

Correction: Dec. 21, 2022 at 9:51 a.m.: This story was updated to correct the financial contributions of two donors, M.R. Whitsett Inc. and Las Vegas Blackbook. The description of the Las Vegas Diamond Foundation was also updated.