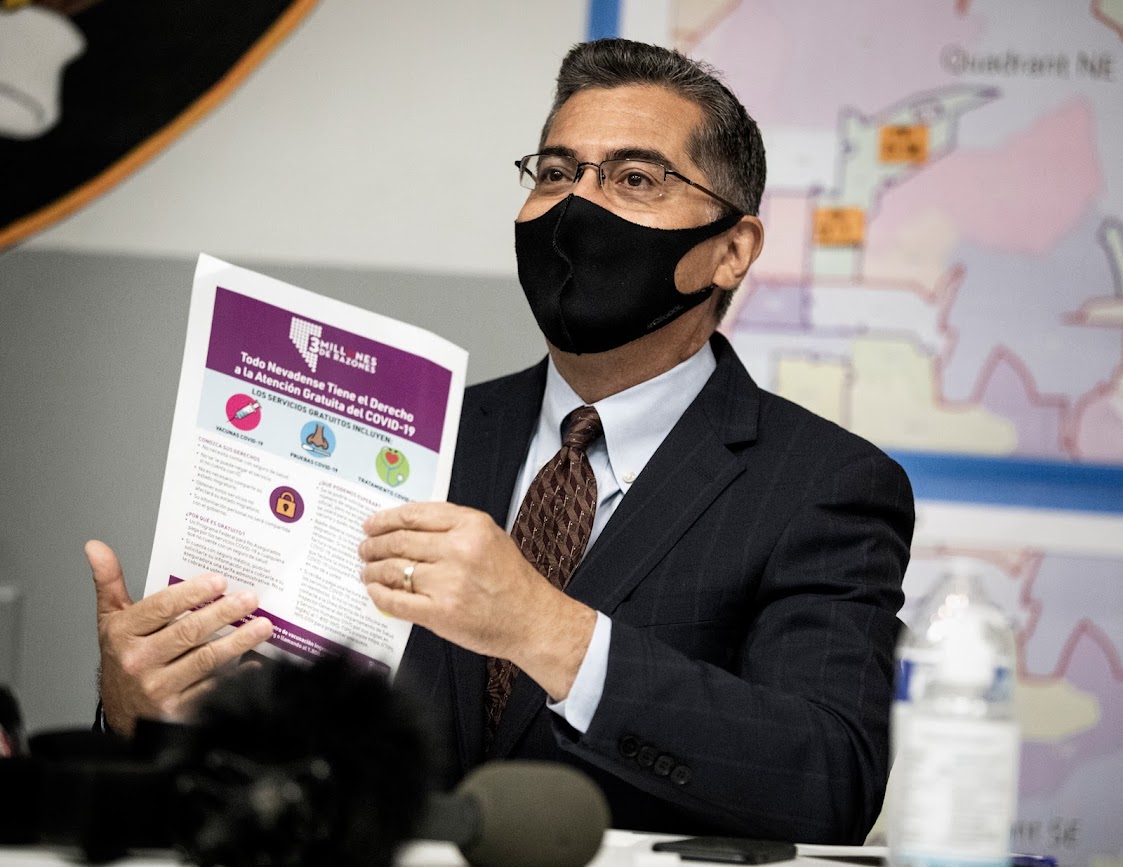 At a briefing with Gov. Steve Sisolak and public health officials on Thursday in Las Vegas, U.S. Department of Health and Human Services Secretary Xavier Becerra said it’s “all hands on deck” as the federal “surge team” continues efforts to get remaining unvaccinated Nevadans vaccinated despite ongoing challenges.

Members of the Federal Emergency Management Agency (FEMA) first arrived in Nevada last Thursday and began training for their efforts to curb the spread of the virus, including door-to-door canvassing and working to expand COVID-19 testing and vaccine access. The team also aims to increase public confidence in the vaccine despite widespread misinformation and distrust surrounding it.

“This is now a pandemic of the unvaccinated,” Becerra told masked public health officials in the packed hall. “If you’re dying today in America from COVID, it’s because essentially you’re unvaccinated.”

The highly transmissible Delta variant now accounts for more than 80 percent of COVID-19 cases nationwide, and Becerra warned that there may be more dangerous variants to come if they do not stop the spread of the virus soon.

“It may not be Delta. It may be Epsilon or whatever we’re going to name it. It may be more dangerous than even Delta,” said Becerra. “We need to be prepared … Americans need to be vaccinated.”

Sisolak acknowledged that the state and the surge teams may not be able to convince everyone to get the vaccine, but said that they will make progress if they continue to educate people and answer their questions about it. Becerra agreed and pointed to evidence that vaccines are largely effective at preventing deaths from COVID-19.

“You can’t combat disinformation easily, but I have heard nobody who wishes to peddle disinformation respond effectively to the fact that more than 99 out of every 100 people who are dying [are] unvaccinated,” said Becerra. “And so, I’m just going to keep repeating that number.”

As of Thursday, Nevada had the highest COVID-19 test positivity rates in the nation at 14.7 percent and the sixth-highest rate of COVID-19 cases in the country. The number of hospitalizations of confirmed COVID-19 patients in Nevada nearly doubled in the past two weeks and the number of new cases has nearly doubled since the start of July.

Clark County commissioners decided on Tuesday to reissue a mask mandate from July 22 to Aug. 17, but just for employees. Despite rapidly increasing cases, Sisolak has not indicated that he would consider reinstating a statewide mask mandate.

“I support the commission on what they did ... We gave [the] responsibility to 17 counties [to] implement their own restrictions and tighter restrictions,” said Sisolak. “I’m glad [Clark County] did something, and I encourage any county that sees a surge to do likewise.”

Clark County Commissioners have not made any decisions about whether or not to reimplement a mask mandate for all, but they will reconvene on Aug. 17 to review the progress of their efforts to curb the virus and determine what their next steps will be, Commissioner William McCurdy II said at the Sherman Gardens Vaccination Clinic, a pop-up COVID-19 vaccine and testing clinic that the teams are supporting.

Becerra emphasized that the team will try anything it takes to get more people vaccinated. He even suggested going to In-N-Out Burger restaurants to encourage people in line to get vaccinated.

“Failure is not an option. Failure means people die,” Becerra said as the room grew silent.

Becerra and Sisolak met with McCurdy at the small, crowded pop-up located in Westside Las Vegas, one of the neighborhoods in Las Vegas that was hit the hardest by the pandemic, said McCurdy. The surge team is focusing on areas of high social vulnerability, high case transmission and low vaccination rates, FEMA Acting Associate Administrator David Bibo said.

Eldorado High School student Jailin Cherry, 16, said he received his first dose of the vaccine at the pop-up today. He said that while he was initially wary of the vaccine, he became convinced to get it after seeing his friend get it and after hearing about his friends’ family members dying from the virus.

“Now I feel … safer [to] walk around with my mask on,” said Cherry. “[The vaccine is] not bad. I feel like everybody [believed in] rumors going around about once you get it, the first five minutes … you’re going to be a zombie.”

He urged people to get vaccinated so that Nevada can recover from the pandemic and students can safely return to in-person school.

The recent rise in cases has been concerning for the Nevada economy as officials from multiple areas – including Los Angeles, Hawaii and Chicago – warn their residents against traveling to the state.

“Vegas is still open. We are still maintaining our priority to provide a safe atmosphere for our tourists as well as for locals,” said McCurdy. “We are … putting this mask mandate in place to make sure we that we can continue to keep our county open.”

Resorts and casinos in Nevada will do more to get people vaccinated to not only protect employees and their families but tourists as well, Sisolak said.

Despite efforts made by the surge team and Sisolak’s efforts to get more Nevadans vaccinated — including the Vax Nevada Days raffle that is awarding $5 million in prizes to vaccinated Nevadans — the pace of vaccine administration has been slow.

There were 4,867 daily doses of the vaccine administered on Tuesday compared to a high of nearly 30,000 on April 15. Nationally, Nevada ranks 35th among the 50 states for the percentage of adults fully vaccinated, at 43.6 percent.

Sisolak touted the progress the surge team and state have made so far in increasing vaccination rates but says there is still work to be done.

“There has been a 34 percent increase in the initiated vaccination rates,” Sisolak said. “That shows that the efforts that our group is putting forward are working.”