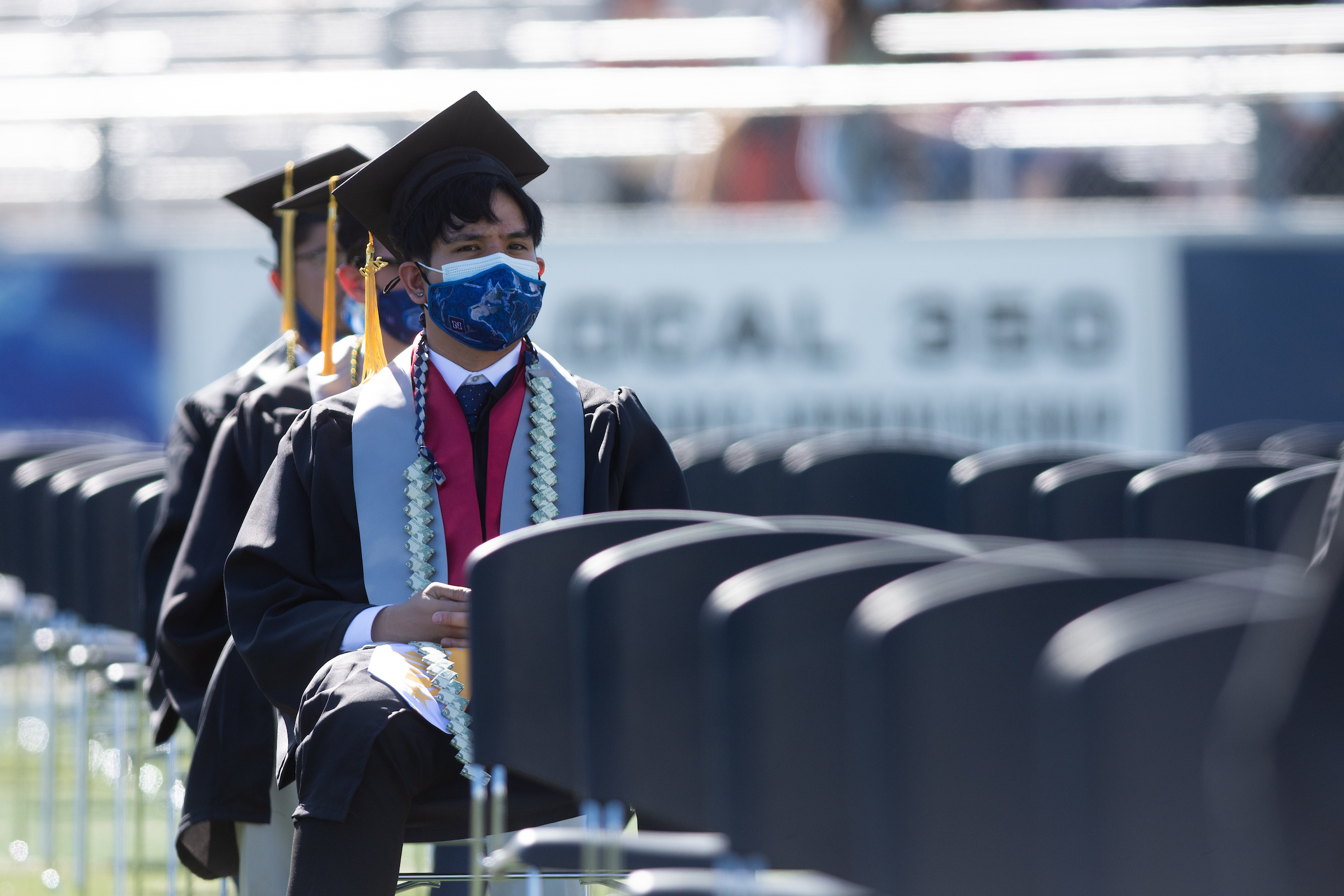 Questions are still swirling more than three weeks after the Biden administration announced plans to provide relief for low- to middle income college graduates — and possibly some parents — by forgiving up to $20,000 in student loan debt per borrower.

The White House couched it as a move to help up to 43 million borrowers, and that may even cancel the full remaining balance for almost half of those borrowers.

The plan has been met with mixed reactions.

For Sparks resident Justin Bouldt – who owed $38,000 in student loan debt after graduating from UNR in 2015 – it’s life changing. He had whittled his balance to $14,000 before the announcement was made. Bouldt qualifies for $10,000 in loan forgiveness, and says he has enough money in savings to pay the remaining $4,000.

“(I’m) finally going to be able to buy a second car, and the wife and I won’t have to carpool to work,” he said.

But it’s a drop in the bucket for other borrowers like Lena (who didn’t feel comfortable sharing her full name), who has $125,000 in student loan debt after earning bachelor’s and master’s degrees from the University of Phoenix. The maximum aid she qualifies for is also $10,000.

Some Republican lawmakers have scoffed at the plan, saying taxpayers who never took out a student loan shouldn’t have to foot the bill for borrowers, and some are even threatening to bring a legal challenge to block Biden’s plan.

Others say the plan doesn’t go far enough to address the country’s student loan debt crisis or  rising costs of a higher education that has made college unattainable for some Americans. Student loan debt in the U.S. totals nearly $1.75 trillion, according to a July report from the Education Data Initiative. The organization estimates that the average annual cost of tuition at a public four-year college is 37 times higher than tuition in 1963.

While campaigning to become president, Biden pledged to make two-year community college free for all Americans and make public colleges and universities free for families with income below $125,000. He also expressed interest in increasing support for undergraduate students of families with exceptional financial needs by doubling the maximum amount of a Pell grant – a form of federal student aid that doesn’t need to be repaid.

Fifty years ago, Pell grants covered “70 to 80 percent of the cost of a four-year degree at a public institution; today, that percentage has been cut in more than half, to roughly 30 percent,” according to Biden’s campaign proposal.

UNLV Assistant Professor of Higher Education Federick Ngo said the situation stems, in part, from declining state and federal support for public colleges and universities in the past 10 years.

“So that means more of the burden has been taken on by individuals and families, and that's why people have had to take up loans to pay for the balance,” he said.

But Biden hasn’t been able to make good on those campaign promises as Congress has continuously shot down the White House’s proposals. Now, the president is moving forward with his student loan debt relief plan without the approval of Congress, citing a 2003 law that gives the secretary of education extra powers during a national emergency, such as the COVID-19 pandemic.

The U.S. Department of Education has released some information about what to expect, and recommends borrowers sign up to get information as it’s released here.

Here’s everything we know so far about the plan:

Who qualifies for the relief, and what student loan types are covered?

Borrowers will qualify for the relief as long as they earned less than those income amounts in 2020 or 2021, said Renée Davis, a vice chancellor for the Nevada System of Higher Education.

If the borrower is a dependent, their eligibility will be based on their family or guardian’s income, according to Lourdes Gonzales, director of financial aid and scholarships at UNR.

The borrowers who receive this relief can be current students — at the undergraduate, graduate or doctoral level — or former students, including college graduates or those who withdrew from college before graduating, Gonzales said.

People who meet these income requirements can get forgiveness on their federal student loans that were dispersed on or before June 30, 2022.

The eligible loan types include: undergraduate and graduate direct loans; Parent PLUS loans and Grad PLUS loans; consolidation loans; and defaulted loans, federal family education loans and Perkins loans held by the U.S. Department of Education.

Private student loans will not be eligible for the debt forgiveness plan.

Does it matter when I got the Pell grant, or a minimum amount I needed to receive in order to qualify for the relief?

Borrowers who received a Pell grant as an undergraduate student and meet the income requirements will be eligible for up to $20,000 in loan forgiveness. The amount of Pell grant the borrower received doesn’t matter, nor does the year. The Education Department has a record of every student who has ever received a federal Pell grant. Borrowers can check to see whether they have ever received a Pell grant by logging into StudentAid.gov. The information will be displayed on your account dashboard, and your “My Aid” pages.

This information might not be displayed online for those who received a Pell grant prior to 1994, but the department said those individuals will still receive the full benefit.

Parents who took out loans on behalf of their children are also eligible for debt forgiveness if their income level was less than $125,000 annually for individuals or $250,000 for married couples in either 2020 or 2021. Additionally, parents who received a Pell grant as a college student would qualify for the $20,000 worth of debt forgiveness if they meet that same income requirement. But if only their child received the Pell grant — not the parents themselves — then the debt relief amount would be $10,000.

How can I get this relief? Is it automatic?

White House officials believe that nearly eight million borrowers may get the relief automatically because the agency already has their income data on hand. The department will send an email and text messages to individuals whom it determines automatically qualify for debt relief. Borrowers won’t have to take any action.

If the department doesn’t have your income information on file or you aren’t sure if it does and want to be on the safe side, officials recommend that borrowers apply for the relief.

The application, which was officially released Oct. 17, can be found on the department’s website. Borrowers will have until Dec. 21, 2023, but the department recommends applying as soon as possible.

How soon will I get this relief?

The Department of Education estimates that borrowers will receive the relief within four to six weeks after they apply. It did not provide an estimate on turnaround time for borrowers that will get automatic relief. Borrowers should expect to be notified by their loan servicer when the relief has been applied to their account.

The department recommends borrowers apply for the relief by Nov. 15  to receive the relief before the student loan payment pause expires on Dec. 31.

How will it work? Will I get any money back?

The relief should be applied to your balance four to six weeks after borrowers submit the application form. For some, this will completely wipe out their balance depending on how much is owed and how much they qualify for. But borrowers should not expect any money back if the amount of relief they qualify for exceeds their remaining balance.

If your balance exceeds the amount of relief you are receiving, the department has outlined a plan for how money will be applied for borrowers with multiple loans.

The department said it will apply the relief in the following order:

If borrowers have multiple loans from the same program, the relief will be applied in the following order:

The department said loan balances remaining after relief will be re-amortized, meaning the borrowers’ monthly payments will be recalculated based on their new balance, potentially reducing their monthly payments. Borrowers’ loan servicers will communicate their new payment amount to them.

Can I get a refund for payments made during the pandemic?

Federal student loan payments have been on pause since March 2020, and are expected to resume January 2023. The department said borrowers automatically will receive a refund of voluntary payments made during the payment pause if:

Will my debt relief be taxed?

Department officials said the student loan debt relief will not be subject to federal income taxes, but at least seven states may have borrowers pay state income tax on those canceled loans. Nevada is not one of them, as it does not have a personal income tax.

What else is the Biden administration doing to assist borrowers?

The Biden administration extended the student loan repayment pause through the end of the year, with payments resuming in January 2023. In addition to this extension and the debt relief plan, the Biden administration has made temporary changes to the Public Service Loan Forgiveness (PSLF) program that may help some borrowers who are employed by nonprofits, the military or federal, state, Tribal or local government become eligible to have all their student loans forgiven. Borrowers have until Oct. 31 to apply for that assistance. Borrowers can find more information about those temporary changes and eligibility here.

The Biden administration also has proposed creating an income-driven repayment plan that it said  “will substantially reduce future monthly payments for lower- and middle-income borrowers,” by:

This proposal is still in the works.