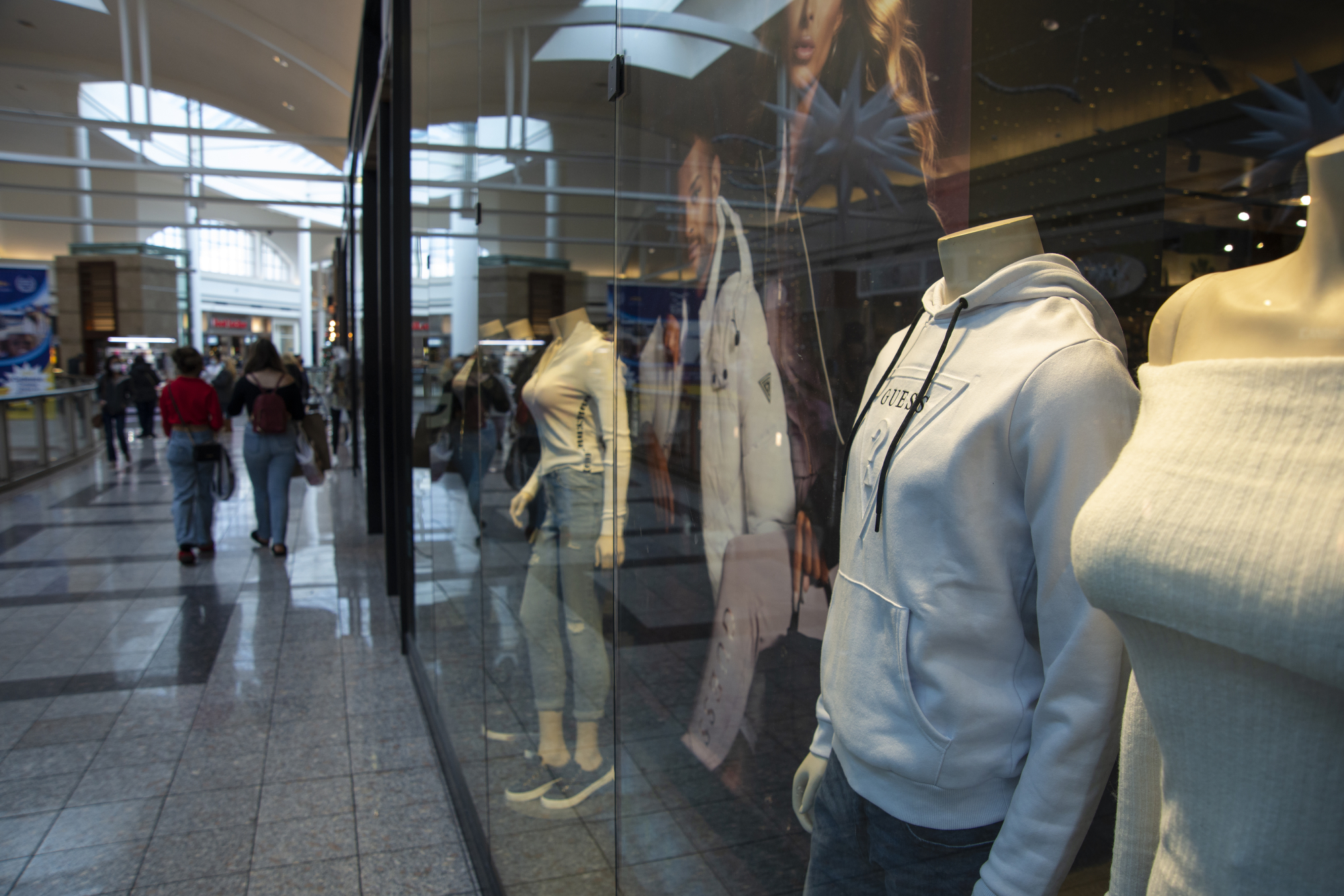 As more and more people were stuck indoors because of the pandemic, many traded in their suits and ties, high heels and blazers, for yoga pants, slippers and high school reunion T-shirts with mustard stains. And if you had a Zoom meeting, say hello to boxers on the bottom and a button-up shirt on top.

Suffice it to say, wardrobes have changed in the last two years, and not in the way fashion trends normally change. The pandemic has shifted the way people approach clothing.

Deirdre Clemente is the director of UNLV’s public history program, where she specializes in fashion history. The Nevada Independent talked with her about how fashion trends have changed since COVID-19 hit the United States.

This interview is shortened for clarity and length. You can find a version of this interview on our podcast, IndyMatters.

How has COVID affected fashion trends and how people approach fashion?

What we wear has always been tied to a representation of our social and socioeconomic identities. So what we're doing right now with the current buzz in American fashion is a direct outgrowth of social and cultural change that has gone down in the past two years of this pandemic.

Because we aren’t seeing people as often as we used to because of working from home and social distancing, are we less concerned about what we are wearing?

I think one of the most important things for us to acknowledge as we move forward culturally with the American wardrobe is to understand what's happening right now with the personalization of dress as an outgrowth of the past 10 years … This happened in World War II. It happened after World War I. Things that we consider these shifts in dress and shifts in fashion aren't just out of nowhere —  they've actually been hanging in the wings, but social upheaval gives them the chance to step center stage.

I think that this rise of casual dress at the level that it is in American culture at the moment is really the natural warp speed version of where we were going.

These changes towards casualization and this idea of, “No, I'm not going to wear a button-down collared shirt and khakis to work anymore” — those kinds of rules just have less weight amid cultural and workplace changes … The modern worker just doesn't live by, “Where's the dress code handbook?” anymore. It's laughable. So that killed off a lot of those vestiges of corporate control over its employees.

So we are shifting away from wearing a tie and sports coat to the office to a more casual trend? Like wearing jeans or yoga pants to the office?

Oh, yes. It has been [shifting] for quite some time. The only thing about dress codes are sort of whether they're imposed by the human resources department or colleagues, and it's frowned upon if you wear [for example] a spaghetti strap tank top to the office. The thing about dress codes is they only work as long as people enforce them.

Because of social media, things seem to be happening at an accelerated pace. Are we seeing fashion trends come and go at a faster rate?

Well, that's been the rise of American consumerism. That idea of “next, next, next” has been a post-war consuming trend. So it’s only going faster. Social media makes it faster.

It'll be interesting to see if there's a cultural push back on some of this. A lot of other consumer experts would say that a lot of people are starting to consume less, actually, because they're having clothes that can fit multiple purposes. So you don't need a wardrobe for work, a wardrobe for your date night ... The versatility of American dress is actually sort of killing off a lot of sectors of formerly strong sectors of the garment industry.

What is athleisure? It’s not athletic wear, but it’s not leisure wear.

Athleisure is not sportswear, it’s [both] sportswear and casual wear with elements of more formal dress. For example, it's not just yoga pants. It would be more like yoga pants with a fake zipper.

The interesting thing about athleisure is it’s trying to be both, so nicer fabric and the detailing of a more classic garment like a sports coat … It really takes those elements of previous versions of sportswear and puts them into stretchy fabrics that are super washable [with] cool color combinations. So that's really what I think athleisure is.

What is the future of denim in the American wardrobe?

A lot of analysts are looking at what's going to happen to the jean market. [The market] hasn't been awesome. It hasn't been a thriving market in the United States, it’s still a thriving global market, but I think what you'll see is mixed denim fabrics are really going to play right into that super casual, yet you can have an edge of formality in it. Darker Jean with a spandex or a different kind of synthetic fiber wove into the denim.

If denim wants to thrive and live on it has to have a way to become modern. People will be wearing the denim that they've owned in their wardrobes for a long time too. So I don't think denim is going anywhere, but I think we're going to see some new modern adaptations of it,

I think some of the more formal elements of our wardrobe, like heels, are actually going to remain in the wardrobe as expressions of personal individuality. But I do think that the functional footwear which has been slowly defining the market for a long time is now going to be the fundamental way that we wear shoes. And I think that people will keep all of their more formal footwear, [like] occasion-specific things.

Are trends as powerful as they once were or are people looking to follow the beat of their own drum and not follow popular trends?

Right before the pandemic, Americans were spending less money on clothes. So per person, people were spending fewer dollars on clothes than they were in, say, 2000. Now some of that has to do with, the clothes have gotten cheaper. In terms of the average person’s buying statistics, [it] would be a little bit fuzzy, but [it] leans towards people buying fewer clothes.

The defining facet of the past 50 years is the rise of individualism in dress. We can TikTok it all we want, and [say] let's all get those weird leggings that make your butt look bigger … so there's those things [that] phase in and out, but the fundamental ethos of the American wardrobe has been about individual expression. That's why the pandemic erasing all of these social standards of, “you can't wear that to the office,” [is] so significant because those things that were less important even before the pandemic are now becoming obsolete.

Is ‘90s fashion coming back?

If the middle schoolers are any indication, and they usually are, then yes.

One thing I really do like to see is some of the masks that say what you want to be saying, like some of the political statements … I'm a big political T-shirt wearer, so I guess masks are like my new version of that. But absolutely. And of course, again, an expression of individuality. You can't smile at people anymore. So let your mask say something.

One of the things I admire most … about Nevada fashion … is the creative interpretation of cowboy wear into everyday life. I saw a guy with a denim vest on the other day at Smith’s; he was just like taking small parts of Western wear and just dropping them here and there.

And how people do that here is very cool. I would definitely say that that's pretty unique to Nevada.

What is something that we should be paying attention to in fashion right now?

I think one of the most important things when you talk about not only the impact of the pandemic on American fashion, but also looking forward with American fashion, is the role of synthetic fibers in our wardrobes.

I think that's going to be really interesting … Synthetic fibers introduced in the 1950s, at a mass commercial level … just have slowly but surely taken over such huge parts of the textile world, and how we dress and why we can go to H&M is because we have all these synthetic fibers.

One of the key things sort of looking forward in American fashion is, what role will synthetic fibers play in the next form of the American wardrobe? And it's looking like they're just going to be the dominant force.

Is there an environmental impact that comes with those synthetic fibers?

Of course. Yeah, there is. I mean, that's the huge thing. The reason we have fast fashion is because we can dump all these chemicals into another bath of other chemicals and turn them into fibers. And every time you wash them, they take a bunch of plastic chunks off [and] put it into the water source. All of this is so we can have more clothes. It really is a huge issue. How much do we want to buy? And in what context do we want to buy these things?