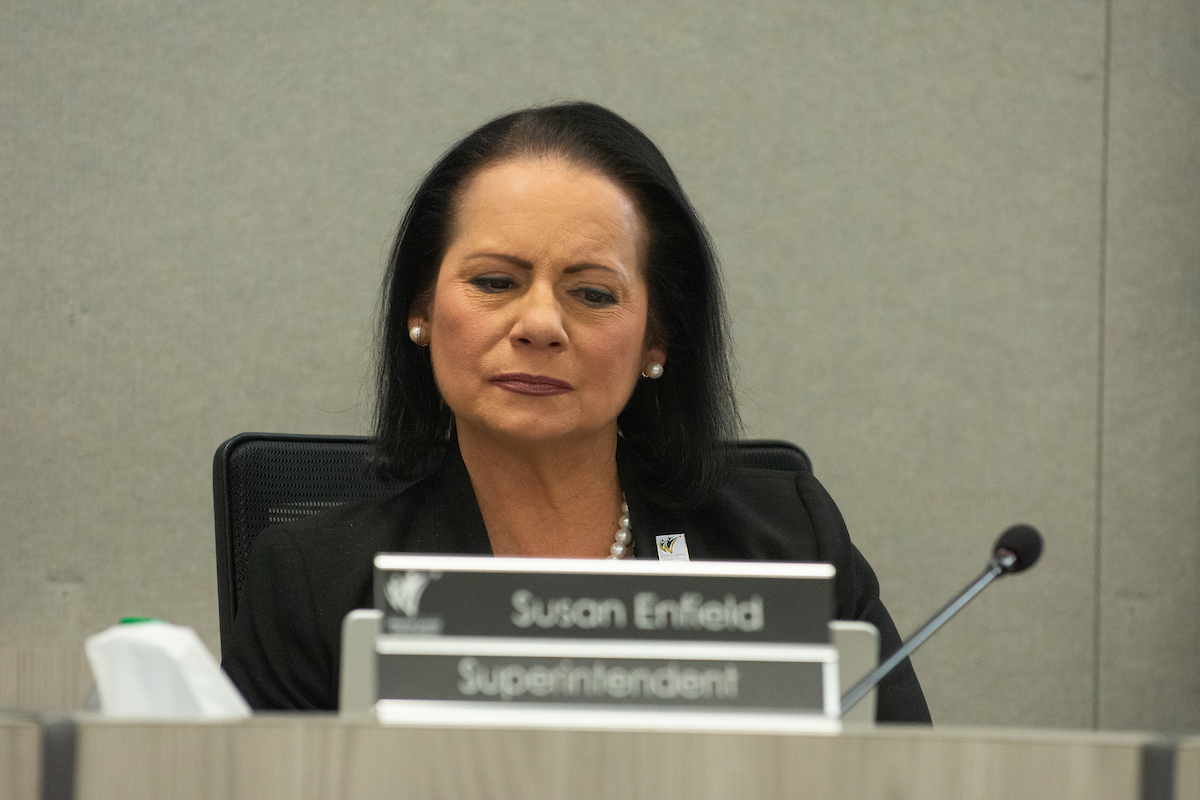 Before she became the new superintendent of the Washoe County School District, Susan Enfield had an idea of what challenges she might expect coming into Nevada, which has historically ranked low in terms of its per-pupil funding.

Six months into her new role, Enfield has learned firsthand what issues this level of funding presents to the school district of about  61,000 students, particularly as it struggles to recruit and retain teachers and other support staff.

It’s not something she can solve alone, she said.

Enfield arrived in Northern Nevada in July after the former superintendent, Kristen McNeill, retired after more than two decades with the district. Prior to joining the Washoe County School District, Enfield was the superintendent of the Seattle-area Highline Public School district for 10 years.

During the school year, Enfield has been working on integrating herself into the school district and the community at large as part of her entry plan which she presented to the Washoe County school board in August.

Enfield recently gave the board an update on her plan, and said she has already visited more than half of the district’s 102 schools. She was able to connect with school staff and hear ideas through her “Soup with the Supe” events, and held meetings with administrators, employee association groups and other state leaders including the presidents of UNR and Truckee Meadows Community College. She also engaged with students and families through community coffee chats, participating in Student Advisory Council meetings and hosting town hall meetings with trustees.

From those meetings, Enfield said she has identified the need to form three new superintendent advisory groups – the Family Action Committee, the Special Needs Family Advisory Committee and the Staff Advisory – as well as short- and long-term ideas to address issues such as the district’s teacher shortage. Her next step is to take her findings and use them to inform her strategic plan, which Enfield will start developing next month.

Enfield recently spoke to The Nevada Independent on what her first six months as the new Washoe superintendent have been like. This interview has been edited for clarity and length.

Q: You became the new Washoe schools superintendent this summer? How’s the transition been for you?

Really from day one, this move has just felt so right. I've been very welcomed by the community and by the staff in the district. I find this to be a very warm, welcoming place. I find this to be a community that really supports its schools and wants to help us be successful. I have a terrific team of people in the district, in the schools and at the central office, who are talented, dedicated. So I've said this from day one, I feel like I won the superintendent lottery coming to the Washoe County School District, and I'm deeply grateful for that.

What are the biggest challenges, needs the district is facing right now?

I knew that I was coming to a state that did not fund its schools or compensate its public education staff at the same level that I was used to. But knowing it, and then living it are two different things.

We're entering a legislative session where I hope to make this everybody’s top priority. We simply have to fund our schools better, and we have to pay those people working in public education better. The example that I've been giving is that a starting teacher in Highline, where I just came from, starts at $65,000 a year and the state just gave them a 5.5 percent cost of living increase. Contrast that with a first-year teacher here in the Washoe County School District that makes $41,000 a year. That's a $25,000 difference.

If we're going to keep the talented, dedicated people we have in our school system, we've got to compensate them competitively, and that is going to take some serious movement on the part of the state. The district alone can't make that happen. So I would say that that is the biggest challenge overall, and really all things spring from that. Because we don't have the funding and the staffing that we need. A lot of our staff are stretched thin.

Q: Earlier this school year, the district was facing a shortage of bus drivers and teachers. How are things looking now? Any improvements on those fronts?

On the teachers, and I would also add to that teacher aides — that is an area where we still have challenges. When I arrived, I was facing a 200-teacher shortage with just two to three weeks to go before students would arrive. One thing I did was I returned 60 teachers on special assignment who are working at the central office doing different, but important work.

But the highest priority is having a highly qualified teacher in front of children, and so I made the difficult but necessary decision to return them to the classroom with just two weeks' notice. As a teacher myself, I knew how difficult that was for them. But as the superintendent with a responsibility to make sure that our kids have teachers in the classroom, I had to do it.

So now we are looking at what we can do next year. I've made a public pledge that we will not be in the scrambling mode next year like we were this past year. So we're combating that through a number of ways, looking at ending one-year-only contracts, providing health benefits to our staff day one. Right now, you have to work in the district 90 days before you get health care. I believe that's a deterrent for us to attract people to come and work here.

We're looking at extending contingency contracts to our promising student teachers. If your principal says you've got what it takes, we're gonna give you a contract now so we don't lose you to another district. We've reached out to Teach for America Nevada to see if we can get a cohort of TFA recruits here next year. We're doing everything we can to recruit and put the conditions in place for the teachers we have to stay, and for us to be able to fill the vacancies as quickly as possible with the high-caliber teachers that our kids need and deserve.

Q: Any plans to give raises to teachers similar to what the Clark County School District did this year?

If there were a means for us to raise teacher salaries in a way that we could sustain, we would have done it yesterday. The reality is this is a state-level problem, and it needs a state-level fix. Absent better state funding, I am limited to what I can do, because ongoing salary costs are exactly that, ongoing costs.

I can't use one-time monies. I can't use any kind of unreliable funding source. Because once you commit to a salary, you've got to commit to that. So this really needs a state fix that the district will then find a way to sustain, but I can't do it alone. I just can't.

Q: Part of your entry plan includes meeting with students. What have you heard from them about what the district is doing well, and what improvements do they want to see?

The first question I always ask when I meet with a group of students is, and this is whether they're in elementary, middle or high, “Do you have at least one adult in your school, whom you know and trust and can go to for help?” I have been heartened to see that pretty much across the board, I get nodding heads and hands raised, and that's good, because our kids need to have that meaningful adult relationship to make sure that they feel connected to their school community. Because if they don't feel that connection and support, they're not going to thrive academically.

One thing that they didn't bring up, but that I certainly am taking a deep dive into are the fees that we charge students for lab fees, art fees, exam fees. I'm doing an analysis of all of those because I am deeply concerned that those are barriers to some students. I want to put together a phased-in approach where the district can find a way to absorb more of those costs so that we're not charging students for their education.

Q: The district’s student enrollment has been on the decline since the 2020-21 school year. What’s behind that drop? Any ideas to improve it?

Sadly, I think that represents a national trend. Public school enrollment has dropped across the country over the past couple of years, and I think we all have different theories as to why. In Washoe County, it does look like our district-sponsored charter school enrollments are up. It looks like some of our private school enrollment is up.

We know that during the pandemic, families had to make difficult choices based on what their children needed. That's the role of the family, right, to advocate and provide what their child needs and sadly, if their public school can't do it, they're going to go elsewhere.

So we will always honor the choice that families make for their children, and continue to listen and learn and find new and better ways to make sure that their public school is not just a viable option, but the preferable option.

Q: The 2023 Nevada legislative session will begin in early February. What are some of the district priorities for this session?

Obviously, sustainable funding is a big thing, but also, we want to modernize our education system here and make sure that our statutes and things do not prevent us from doing the kinds of work such as competency-based education and things that we really know are good for students, but that are challenging to do in the current landscape.

So the [bill draft request] that we submitted has to do with conducting a thorough analysis of the barriers at the state level to creating an education system that reflects the best of what we now know our students need and deserve in our schools. I'm hopeful that that may get some traction.

What are your hopes for the district going forward?

We have lots of work to do, but we are a district on the rise and I believe that in the coming years, we will be the district that the state and frankly the nation will look to for what a community in partnership with its public school system can achieve for its children. I believe that in my bones.