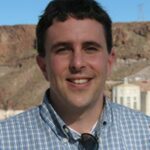 James R. Skillen
January 24th, 2021 - 2:00am
An image of rancher Cliven Bundy as seen on a video camera while he conducts a news conference in front of Metropolitan Police Department on Wednesday, Jan. 10, 2018. Bundy, his sons and a co-defendant in a federal case was dismissed due to prosecutorial prejudice. (Jeff Scheid/The Nevada Independent)
Justice — beginning with Cliven Bundy

On Jan. 6, thousands of people stormed the U.S. Capitol, leading to five deaths and substantial property damage. Lawmakers saw firsthand what the FBI has been warning them about for years: the greatest domestic terrorism threat is from right-wing extremism. What is more, the siege in Washington, D.C. demonstrated that right-wing extremism is not limited to self-proclaimed militias and Nazi sympathizers. It has made substantial inroads among mainstream conservatives. The FBI has pledged to bring the rioters to justice, but addressing this crisis requires the federal government to address anti-government extremists who have been violating the law for decades, often with broad public support. In Nevada, the federal government should start with Cliven Bundy.

To be clear, Bundy was not at the Capitol and did not incite the riot directly. But he has spent decades denouncing and breaking federal law and, with his sons Ammon and Ryan Bundy, leading elements of the anti-government movement in the West. The Bundys secured their leadership status and burnished their extremist credentials by rhetoric. But even more, they gained a national stage in two dangerous confrontations with federal law enforcement. In 2014, they called armed militias to the family ranch near Bunkerville to stop the Bureau of Land Management from rounding up their cattle, which had been trespassing on public lands for 20 years. Federal agents handled the roundup poorly, and facing a wall of guns, they relented and allowed the Bundys to continue their willful trespass. In 2016, Ammon and Ryan Bundy led an armed occupation of the Malheur National Wildlife Refuge. It terrorized and divided the town of Burns, Oregon, and it led to the shooting death of LaVoy Finicum. For their acts of intimidation and threats of violence, they spent almost two years in pretrial detention, but won their cases and have faced no further consequences.

In my new book, “This Land Is My Land: Rebellion in the West,” I chronicle some of the breadth of anti-government extremism, including threats, intimidation, and violence against federal employees. The Bundys continue to incite this, or at least celebrate this, throughout the country. After the mob overwhelmed Capitol police earlier this month, Cliven Bundy’s only criticism was that Trump didn’t support the insurrectionists enough:

“You can’t clean the swamp by standing off at a distance and smelling it,” he wrote. “Today President Trump had hundreds of thousands of people and he pointed the way—pointed towards congress [sic] and nodded his head go get the job done. We the People did clear the chambers of Congress and 100,000 should have spent the night in the halls and 100,000 should have protected them. Trump blew his trump of retreat and the sun goes down” (in a Facebook post that has since been removed).

Bundy has promised the Biden administration a reprise of the 2014 standoff if they try to take his trespassing cows again — or enforce the penalties that the courts have ordered him to pay. So what should the Biden administration do about this? Bundy’s anti-government views, after all, are not illegal. His thinly veiled celebration of the Capitol mob certainly raises questions about the line between free speech and inciting violence, but it is hardly a promising avenue for the Department of Justice. And trying once again to round up Bundy’s cattle, which continue to trespass on public lands, will almost certainly lead to another armed confrontation. Another round up would take days or weeks, giving the Bundy's more than enough time to muster another private army and to secure national support from Trumpian conservatives.

The Biden administration should address Bundy’s continued grazing trespass, because it is such a clear and willful violation of federal law. There is no ambiguity here. Federal district courts have ruled repeatedly that Bundy is in violation of federal law, and Bundy’s counter suits against the federal government have all failed utterly. But the administration needs to take a different approach. Until now, the feds have addressed the trespass issue as a civil matter, pursuing injunctions and financial penalties. Bundy has ignored both. Now, with full authority under federal law, the administration needs to ask a federal judge to find Bundy in criminal contempt for his willful disregard of court orders. Federal law enforcement should arrest Cliven Bundy quickly, before he can summon another ragtag militia. And Bundy should remain in prison until he decides to remove his cattle voluntarily.

This strategy has worked in other cases, including an equally extreme case in Arizona. Some commentators doubt that Bundy would yield, as he has already spent two years in prison, but I am more optimistic. His pretrial imprisonment was not negotiable. In this case, he could negotiate an end to imprisonment at any point. And the federal government could show mercy by forgiving Bundy’s vast financial penalties and back payments. If Bundy does choose to remain in prison for the rest of his life, because of the depth of his anti-governmental conviction, he at least will be an example of justice served rather than one of justice evaded.

James R. Skillen is an associate professor at Calvin University. He hails from Annapolis, Maryland, and has an interest in federal land and resource policy and the American West.